Rainbows, a Doll House and the Eerie 'Candyman' Score: They're All on Dark Mofo's Full 2022 Lineup

The Tasmanian winter festival will also feature The Kid LAROI, immersive art by Jónsi and the sounds of 'Chernobyl'.

Making a winter date with Dark Mofo always feels like crawling into another world — and, based on the Tasmanian festival's programs over the years, that's the active aim. The Apple Isle's moody and brooding music and arts event takes its cues from its host and organisers, the Museum of Old and New Art, of course, which results in a lineup filled with the surreal, strange, sublime and surprising. In a 2022 bill that includes everything from rainbows to the Chernobyl score played live in an immersive industrial setting, that trend is naturally set to continue.

After announcing the first highlights for this year's fest back in March — and revealing that it'll run over two weeks as well — Dark Mofo has dropped its full 2022 program. If a trip south between Wednesday, June 8–Wednesday, June 22 wasn't already on your agenda, it should be now. All up, Dark Mofo 2022 will feature more than 100 artists from 30 countries, and span everything from acclaimed local names hitting the stage to a life-sized doll house that attendees can wander through, all to celebrate the theme 'resurrection'. First, the tunes. The Kid LAROI, Japanese cult-favourites Boris and English indie muso Baxter Dury will be doing their thing on the fest's first weekend — with the latter intriguingly described as "comedown disco". Then, the following week, Chelsea Wolfe and Emma Ruth Rundle join the bill, as do the return of Hymns to the Dead, Swiss metal band Triptykon doing an Aussie exclusive show, Perfume Genius, and four-day experimental and electronic music microfestival Borderlands. Yes, there's truly something here for everyone.

Two big music highlights spring from the realm of film and television: live performances of the scores to 2021's excellent new Candyman and 2019's haunting HBO miniseries Chernobyl. With the first, Robert Aiki Aubrey Lowe will be playing the sounds that helped make the movie so unnerving. At the second, Emmy-winner Hildur Guðnadóttir (also an Oscar-winner for her Joker score) will team up with Chris Watson and Sam Slater, and all proceeds from the show will be donated to Voices of Children to help Ukrainian children and families.

All of the above joins the previously announced Kim Gordon, who'll bust out songs from her 2019 solo release No Home Record, plus Berlin-based composer and producer Nils Frahm playing Music For Hobart. And, Spiritualized, Deafheaven and American multi-instrumentalist Lingua Ignota are already on the lineup, too. That's your ears well and truly taken care of — but Dark Mofo's visual lineup is just as impressive. Lovers of engaging art will want to check out Japanese Australian artist Hiromi Tango's Rainbow Dream: Moon Rainbow, which will feature a healing colour palette to put viewers in a joyous mood. Also a must-see is Hobart-based Sabio's Holy Mother of God: Emergency Doll House, which'll use projection mapping, sculpture and animation to turn a three-storey building into a carnival-style trip through the subconscious.

Jónsi from Sigur Rós is on the bill as well, thanks to a multi-channel immersive experience inspired by the recent eruption of Iceland's Fagradalsfjall volcano. And, so is Anger, a performance dedicated to Kenneth Anger's life and work in occult cinema. 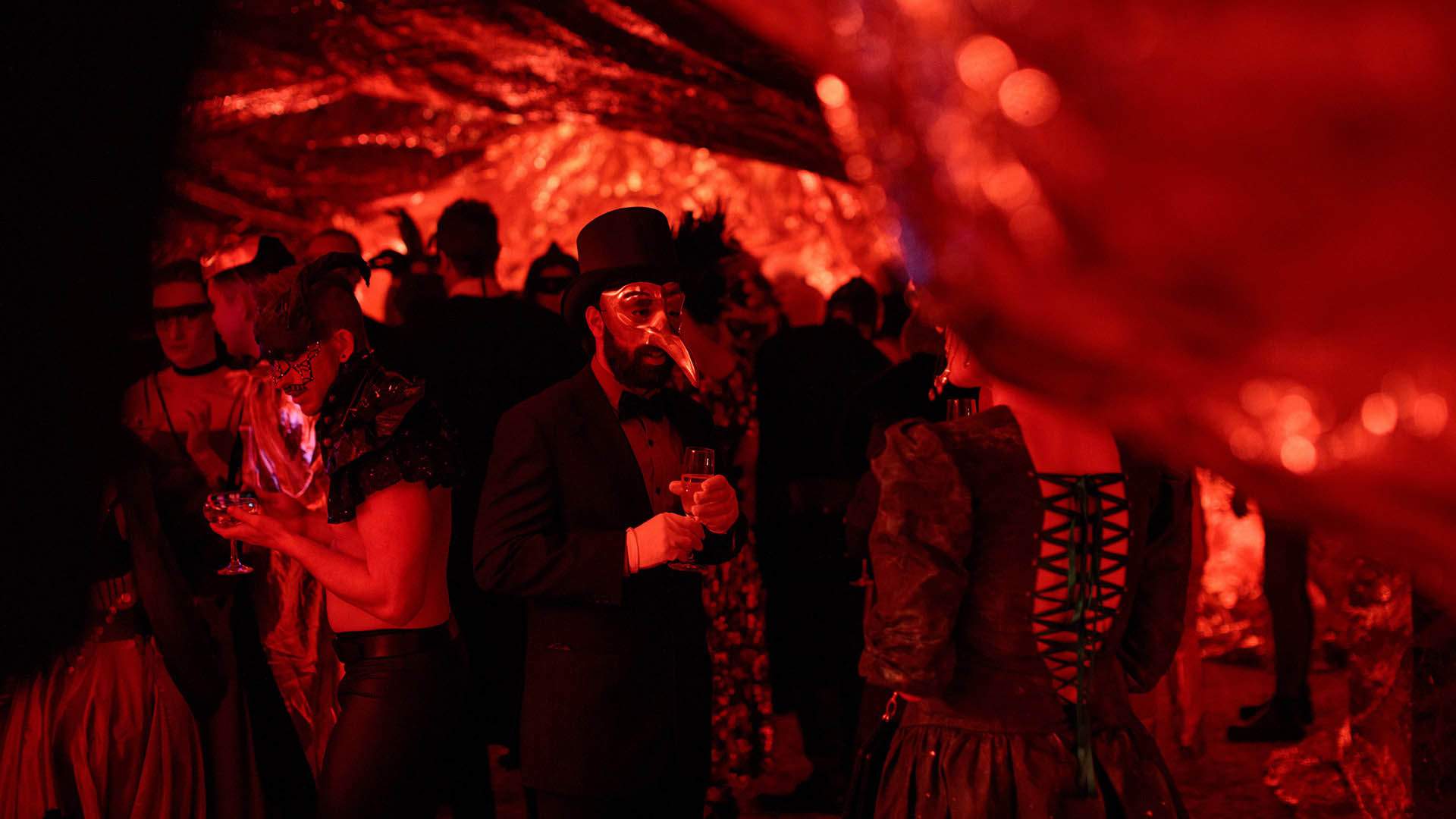 Throw in a heap of Dark Mofo's signature festivities — such as the return of The Blue Rose Ball and its costumed debauchery, the Nude Solstice Swim (because it wouldn't be Dark Mofo without it), the City of Hobart Winter Feast on the waterfront, Night Mass: Transcendence in the In The Hanging Garden precinct and the Reclamation Walk — and yes, this is a huge program.

Also popping up again is Memorial, too, which sees people provide the ashes of their loved ones to be placed inside a handcrafted firework that then explodes for everyone to watch.