After opening 90 bars over the past eight years, bringing its worldwide footprint to 94, Scottish brewery BrewDog has finally set up shop in Australia. And, sprawled across a hefty parcel of land by the banks of the Brisbane River, it has arrived with a splash. That said, while a brand new jetty has just been built right next to the company's Murarrie site — which has been dubbed DogTap Brisbane — don't go planning on pairing your brew with a dip in the ol' Brown Snake. Brisbanites, you really do know better than that.

Still, Calvin McDonald, BrewDog's operations manager for Australia, isn't ruling out making the most of DogTap's impressive location. "There aren't many bars in the world that are totally accessible by jet ski," he notes, without giving away what fun activities the company might have in store down the line. If you've been following the brand, you'll know that it has engaged beer-lovers in many inventive ways over the years, including launching a craft beer hotel in the US, brewing up a Subwoofer IPA for pooches and taking to the skies in the world's first craft beer airline. In Brisbane, brew aficionados can look forward to the BrewDog basics when DogTap opens to the public on Thursday, November 21. Acting as the brand's Australian base, the brewery will pump out beer that'll get shipped around the country. It'll also have a huge taproom with food and plenty of opportunities to learn more about craft beer. There'll be tours of the facility, once the fully automated four-vessel 25-hectolitre brewing system and accompanying canning line is completely up and running in January, while eager drinkers can also enrol in Beer School — aka two-hour guided tasting sessions where one of BrewDog's Cicerone-certified staff will talk you through the BrewDog and craft beer basics.

First announced in 2018, and only the company's fourth taproom directly attached to one of its breweries, BrewDog's $30-million street art-covered Brisbane site boasts a range of other reasons to drop by. Heading to the end of a Murarrie industrial estate hasn't ever been high on locals' to-do lists, but making the journey to sip freshly poured cold ones on a 485-square-metre riverside patio soon should be. The sizeable outdoor area comes with views towards Hamilton and the Gateway Bridge, as well as ample seating. There's also a selection of games, such as giant Jenga, giant chess and giant Connect Four. And, both the public and staff car parks are licensed too, so beer festivals and other events could be in DogTap's future. If you're coming by for the beer, BrewDog's headliners (including its famed Punk IPA) sit alongside a heap of small-batch brews. Nodding to the growing local craft beer scene — one of the reasons that BrewDog chose Brisbane as its Aussie base, McDonald advises — is a rotating range of guest tipples from other Queensland breweries, such as Range Brewing, Currumbin Valley Brewing, Balter, Aether, Brouhaha and Black Hops. All-Australian wines, an Aussie-heavy spirits list and local soft drinks are also on offer, should you want something other than beer. Of course, if you fall into that category, McDonald hopes that BrewDog will convert you. He's adamant that there's a craft beer for everyone, and that anyone who says they don't like beer just hasn't tried the right brew for them yet.

Food-wise, it's a lineup of familiar bar favourites. Think 11 types of burgers and eight kinds of pizza — plus Korean-style chicken wings, crispy pork, baby squid and barramundi fritters. On weekends, a brunch menu will feature chicken and waffles, eggs benedict and other classic meals, while you can tuck into two-for-one vegan dishes on Mondays. 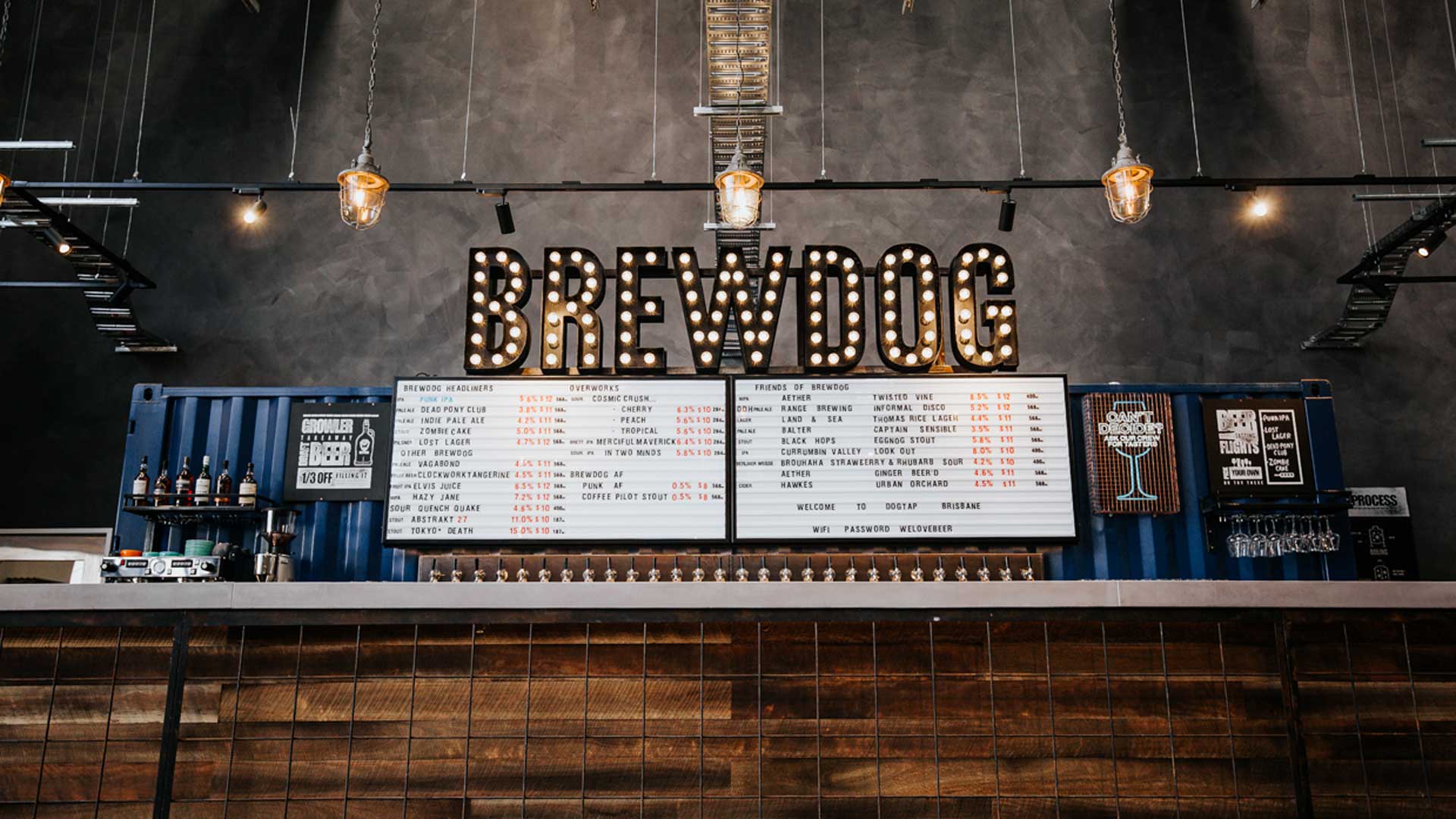 Really love BrewDog? There's a merchandise stall that's already been selling items before DogTap even opens. Want a few brews to take home? Stop by the takeaway area on the way out the door.

And if you're an interstate BrewDog fan hoping that it'll be coming your way soon, McDonald explains that the plan is to open five Aussie venues in the next five years (then, hopefully, another five before the brewery marks a decade in Australia).