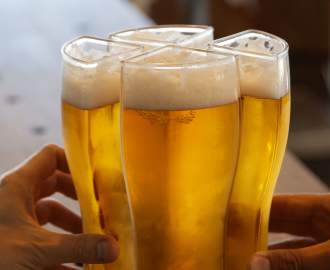 Nearly two decades after it transformed from an unloved patch of Fortitude Valley into the suburb's upmarket precinct, James Street is in makeover mode once again — and it has just welcomed a Michelin-starred chef to the area.

Chef Alan Wise has returned to Australia from New York to open Beaux Rumble, which fittingly takes its design cues from Grand Central Station. Food-wise, the restaurant focuses on woodfired Australian cuisine — heroing seafood and plant-based dishes — from its digs in Ada Lane beside the newly opened The Calile Hotel.

Sprawling across 400 square metres over two levels in the newest part of James Street, Beaux Rumble will eventually operate as an all-day eatery. For now, it's open for dinner from Tuesday to Saturday. The menu changes daily; however diners can expect smokey tastes from the open kitchen, which includes a sizeable custom grill. Think cherry wood-smoked oysters with dashi jelly, champagne crayfish ceviche, grilled scallops with roasted enoki mushrooms, wood-roasted sirloin paired with potato terrine, and iron bark-charred leeks with truffles and almond cream.

From November, New York-style brunches will also be on offer, complete with plenty of champagne. Full brunch details haven't been revealed as yet, but Beaux Rumble boasts 20 sparkling wines on its menu — plus whites, red, beers, ciders, spirits and cocktails, with the latter spanning boozy concoctions like the Berri Lane (with acai, vodka, blueberry, mint and lime prosecco) and alcohol-free sips such as the Yuzu Grey Tea (with yuzu, earl grey tea, lemon and bitters). Patrons can enjoy all of the above on a dining terrace overlooking Ada Lane, in a ground-floor main dining room or in one of the two private dining room upstairs. If you're wondering just how Beaux Rumble's various spaces nod to Grand Central Station, they take inspiration from the 1913-built transit hub's Beaux-Arts architecture. Features include ornate vaulted metal, marble benches and tiles, brass fittings and oak flooring, as well as archways, domed ceilings and intricate Art Deco touches. Designed by s.t.udio's Sally Taylor, the restaurant's fit-out favours materials that won't just stand the test of time, but will also age appropriately.

As for the Victorian-born Wise, his arrival in Brisbane marks the latest stop in a global career that started in London in the 90s, includes stints in regional Victoria, Vancouver and Dublin, and saw him work through top restaurants such as Picholine, Juni, Public and Rouge Tomate Chelsea. It was during his sting as executive chef at the latter in 2017 that Wise earned his Michelin star.