From epic lookout points to moonlit riverside strolls, there are plenty of ways to keep the night going just a little bit longer.

Date night can't be all loud bars, fancy dinners and fast times. There's a point in the evening where the two of you just want to slow down, maybe take in a bit of scenery, even some stargazing if you know the right spot.

We've rounded up some of Brisbane's most gorgeous vistas, lamplit walks and secluded night haunts for you and your date to keep the good times going. City skylines, river reflections, hilltop panoramas and illuminated parkland wanders — when it comes to aesthetic night-time experiences, the River City has it all.

And if you want to snap some mementos of your romantic evening, the Samsung Galaxy S22 Series has a Nightography mode that'll capture those night lights perfectly. Don't let the beautiful nocturnal photo ops of this fine city go to waste. Quite literally made for views, the Wheel of Brisbane can get you high enough (60 metres high, to be precise) for 360-degree panoramic vistas of the skyline.

Since 2008, these floating gondolas have been raising tourists and locals alike into the air to see the city (and beyond) from a whole new angle. There's also an audio guide that narrates the history of everything you're looking at, from the Botanical Gardens just across the water to Mount Coot-tha in the distance.

The wheel is a night-time photo op in itself, so don't forget to take a snap of the towering structure against the night sky when you get back to the bottom. This was built as the world's largest hybrid tensegrity bridge. Don't know what that means? Don't worry — all you need to know is that it's one of Brisbane's pedestrian bridges that make this such a walkable city.

Spanning from QAGOMA to the inner-north pocket of the CBD, this beautiful bridge gives you a view all the way down the curves of the river and the entire span of South Bank. Turn around, and on the other side you'll catch the William Jolly Bridge and the twinkling lights of the inner 'burbs.

The Kurilpa Bridge is also one of Brisbane's more visually fascinating man-made structures (and worthy of a photo or two of its own) — especially when it's lit up in vibrant colours at night, its illuminated poles slashing the sky in a very aesthetic feat of engineering. This one almost goes without saying. Drive up to the highest point at Mt Gravatt Lookout Reserve — it's not even 20 minutes' drive from the CBD — and park near the lookout. Your reward? A soaring panoramic view of Brisbane, Moreton Bay and beyond, framed by native trees and bushland.

Look out over the columns of city light glowing in the distance and the constellation of suburbs stretching out beneath the moon and stars and broad, sweeping sky. It's the perfect occasion to put that low-light Nightography to work. Surrounded by only the sounds of nature, with the rest of the world so far away, makes for a very, very romantic little sojourn. Finished up your dinner date in the city? Take a ferry over to Kangaroo Point. Not only do you get all the fun of a nocturnal boat trip, you'll be treated to a view of the illuminated cliffs rising in the night as you approach the parkland.

Wander along the green or beneath the craggy stone cliff faces, catch sight (or a crystal-clear snap) of night creatures scurrying through the park, walk out to the wooden jetty, or just sit together on a bench and look back on the towers of the city beneath the starry sky — and wonder whether now's the time to hold their hand. 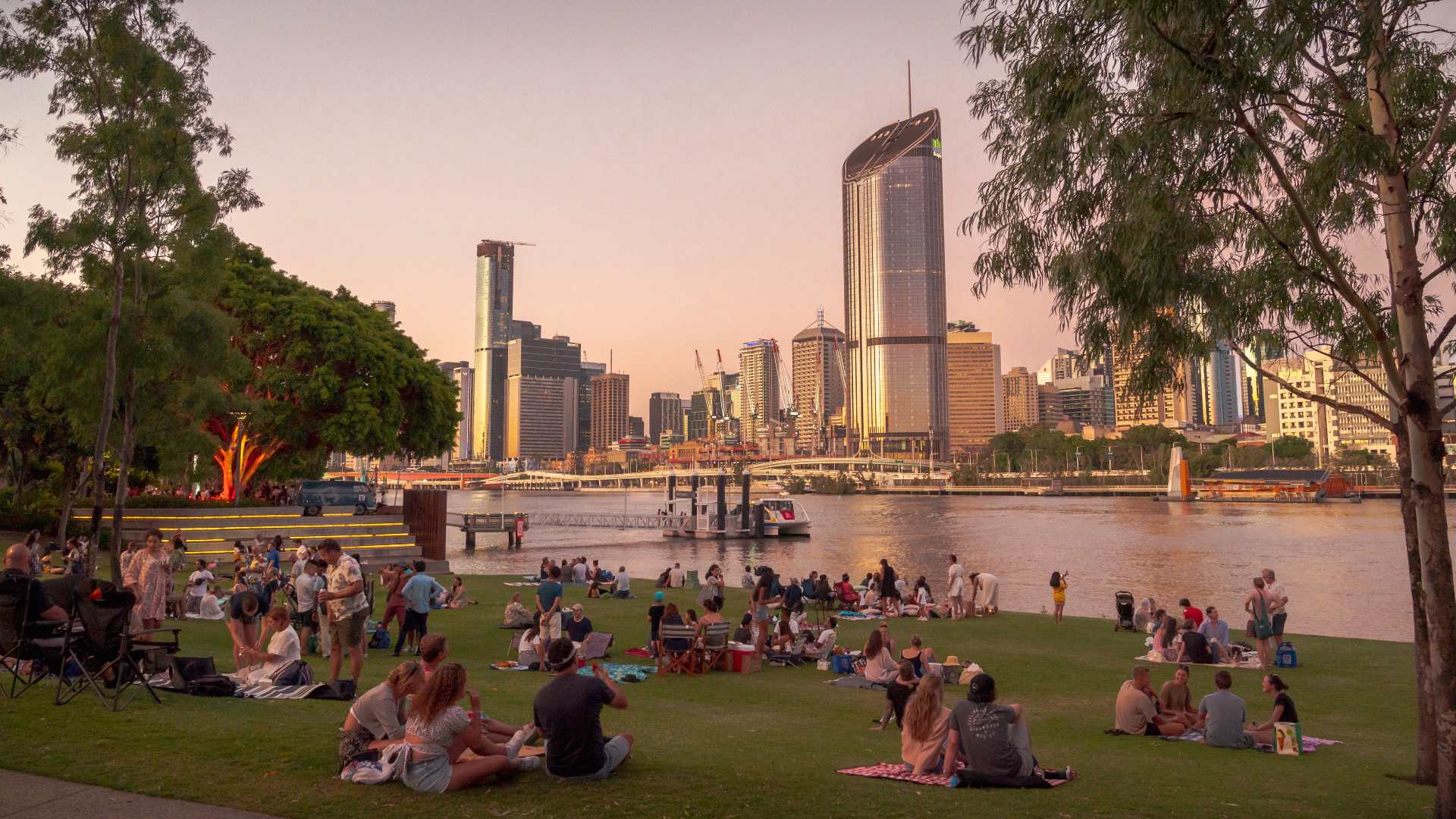 If you've spent any time in Brisbane, you probably already know all about the views and night-time meanderings of South Bank. Maybe you've just been a daytripper to the precinct's sun-drenched bars and perfect picnic lawns. But there's a reason this is the spot for light shows and night markets.

When you walk the parkland paths at night, it's an entirely different world. The noises of nocturnal creatures in the gardens, the perfume of the tropical plants, the twisting bougainvillea trellises, the city skyline reflected in the water, the wash of the great Brown Snake against the waterline and ferry jetties — even the towering blocks of QPAC have their own romance. The perfect spot, in other words, for a date-night stroll. If you've finished your date at Howard Smith Wharves and you fancy a scenic diversion before hitting the bars of New Farm and the Valley, take a stroll along the New Farm Riverwalk. This raised, 870-metre-long walkway zigzags with the curves of the river and ends at Riverview Court — a decent there-and-back stretch that makes for a tranquil night-time wander.

Make your way along the lamplit route and see the clifftop homes of New Farm nearby and the CBD vista behind as the gentle current of river laps beneath your feet, and take in the twinkling lights of the towering Story Bridge shedding its glow over the mangroves and dark waters below. If you've been kicking it in West End all evening, you don't need to head to South Bank for views — just walk uphill. Highgate Hill Park is secluded and suburban, but offers a unique vantage point from 62 metres above sea level that provides clear, close-up vistas of the city below.

As you take in the expansive views down to the river and the suburban sprawl beyond, this peaceful hilltop will seem like a world away. You're not likely to be bothered with crowds or foot traffic here, so the two of you can just relax in the gazebo or lie back on the grass on a warm summer's night and watch the stars come out.

Make your nighttime epic again with a Samsung Galaxy S22 series device. For more info, head to the website.