Head somewhere with dramatic sights to dramatically boost your wellbeing.

Head somewhere with dramatic sights to dramatically boost your wellbeing.

Wherever you are in Australia, you're never far from nature. But, when you really need to unwind, your best bet is to find somewhere remote — preferably, a place where emails, phone calls and bosses can't reach you. Plus, you should find some serious natural beauty on which to feast your weary eyes.

To that end, we've taken a good look around the nation at some of the most spectacular spots — from the coral-filled waters of Queensland's Heron Island to the empty beaches of NSW's Mimosa Rocks National Park to the granite boulders of Tasmania's Bay of Fires.

And just like us, Stoneleigh Wild Valley is all about celebrating the wondrous work of nature. The New Zealand winery follows a wild fermentation process for its wines resulting in flavours that are rich in complexity. So, together, we've scoped out five spots around the country where you can unwind — perhaps even with a glass of vino in hand. Next time you're planning a weekend getaway, make tracks to one of these beauties. Your overworked body and fatigued brain will thank you. 72 kilometres off Gladstone lies Heron Island, one of the Great Barrier Reef's most unspoilt islands. Just 800 metres long and 400 metres wide, it's mostly national park — fringed with white sands and, beyond that, coral reef. Between November and March every year, green turtles and loggerhead turtles (both threatened) nest here and you're welcome to watch them, as long as you stick to turtle watching guidelines. Any time of year, expect to meet seabirds a-plenty, plus many a sea critter if you go on a snorkelling or scuba diving excursion. There's just one place to stay: the eco-friendly Heron Island Resort, where you can choose from private rooms surrounded by pisonia forest, suites with incredible sunset views and a beach house with room for up to four guests. 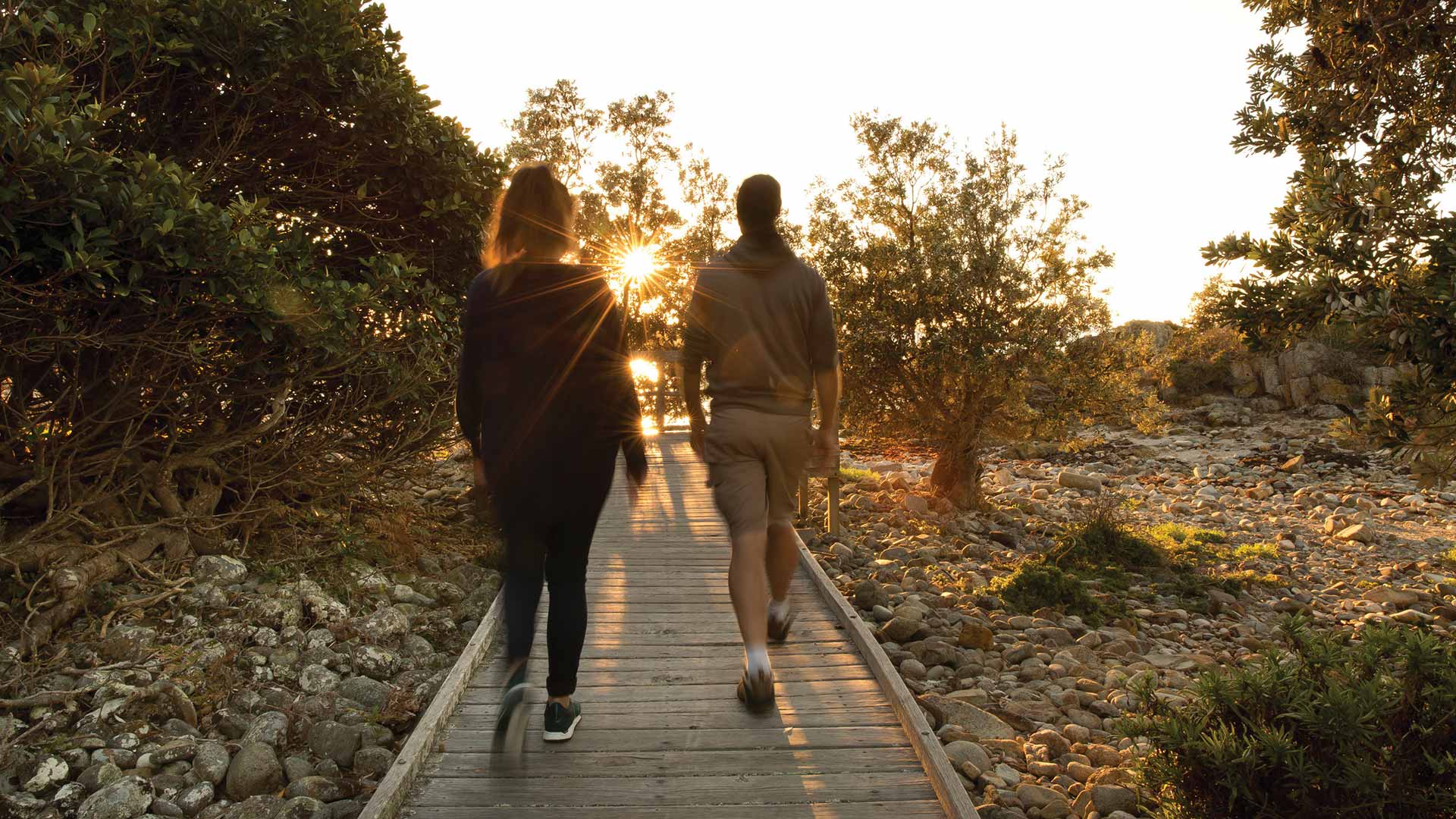 Found on the NSW South Coast, around five-and-a-half hours' drive south of Sydney, Mimosa Rocks National Park is a land of empty beaches, rocky headlands and forests filled with wildlife. If you're keen to immerse yourself in nature, pitch your tent at a beachside campground, such as Aragunnu or Picnic Point. Prefer the comfort of four walls? Book the heritage Myer House. Either way, be sure to take a dip at Moon Bay, go for a stroll along Middle Lagoon Walking Track and check out the surf at Nelson Beach. Bay of Fires takes its name from its flaming colours. Granite boulders covered with bright orange lichen frame the coastline and, in contrast with the deep blue of the sea, create an extraordinary effect. The bay stretches for 50 kilometres along Tasmania's northeast coast, from Binalong Bay in the south to Ansons Bay in the north. Get back to nature in a tent at a free campground, sleepover at a luxe glamping site or sink into comfort at a B&B. Wherever you sleep, make sure you spend some time exploring on foot — whether you conquer the four-day Bay of Fires Walk or stick to day hikes. Take some time off the mainland at Lord Howe Island, a rugged paradise that's a two hours' flight east of Sydney with a population of just 382. To spend your entire break wrapped up in nature, embark on the Seven Peaks Walk, a five-day, 45-kilometre hike that takes in banyan forests, coastal cliff faces and magical beaches. If that sounds too long, there's a bunch of day walks to try, too. Alternatively, go snorkelling in clear waters, laze about on beaches or paddle board around. And forget all about crowds: no more than 400 visitors are allowed on the island at once. Clear your head with some invigorating mountain air in The Grampians, a mountain range three hours' northwest of Melbourne dotted with waterfalls, wildflower meadows and dizzying peaks. Begin your adventures at MacKenzie Falls, one of Victoria's biggest waterfalls, before heading to mystical Silverband Falls, surrounded by lush ferns and flowers. For views that go on forever, drive to Boroka Lookout, Reeds Lookout or Mount William, which, at 1167 metres, is the highest peak in the range. Or, if you're keen to get moving, take a hike. A good place to start is The Pinnacle, accessible by a variety of walking tracks, which range from 2.1 to nine kilometres.

Published on July 15, 2019 by Jasmine Crittenden