Nine of the Best Walks Around Metro Melbourne

Scenic trails that prove you don't need to venture far to take a hike. Sometimes, you just want to stretch those legs and grab some fresh air without having to road trip to your starting destination. Luckily, Melbourne is brimming with scenic walking trails tucked away just a few kilometres from the dense urban hustle and bustle of the CBD.

Expect picturesque routes that'll actually make clocking up those daily steps an enjoyable pursuit. Whether you fancy a stroll by the water, or you're keen to explore some leafy parkland, you don't have to trek too far at all to find yourself some wide-open walking track just waiting to be trodden. Lace up those kicks and smash out a few brisk inner-city kilometres on one of these great walks around metro Melbourne.

When you're heading out for a walk, make sure you're following all current Victorian public health orders. You can stay up to date with the current VIC restrictions at the DHHS website. 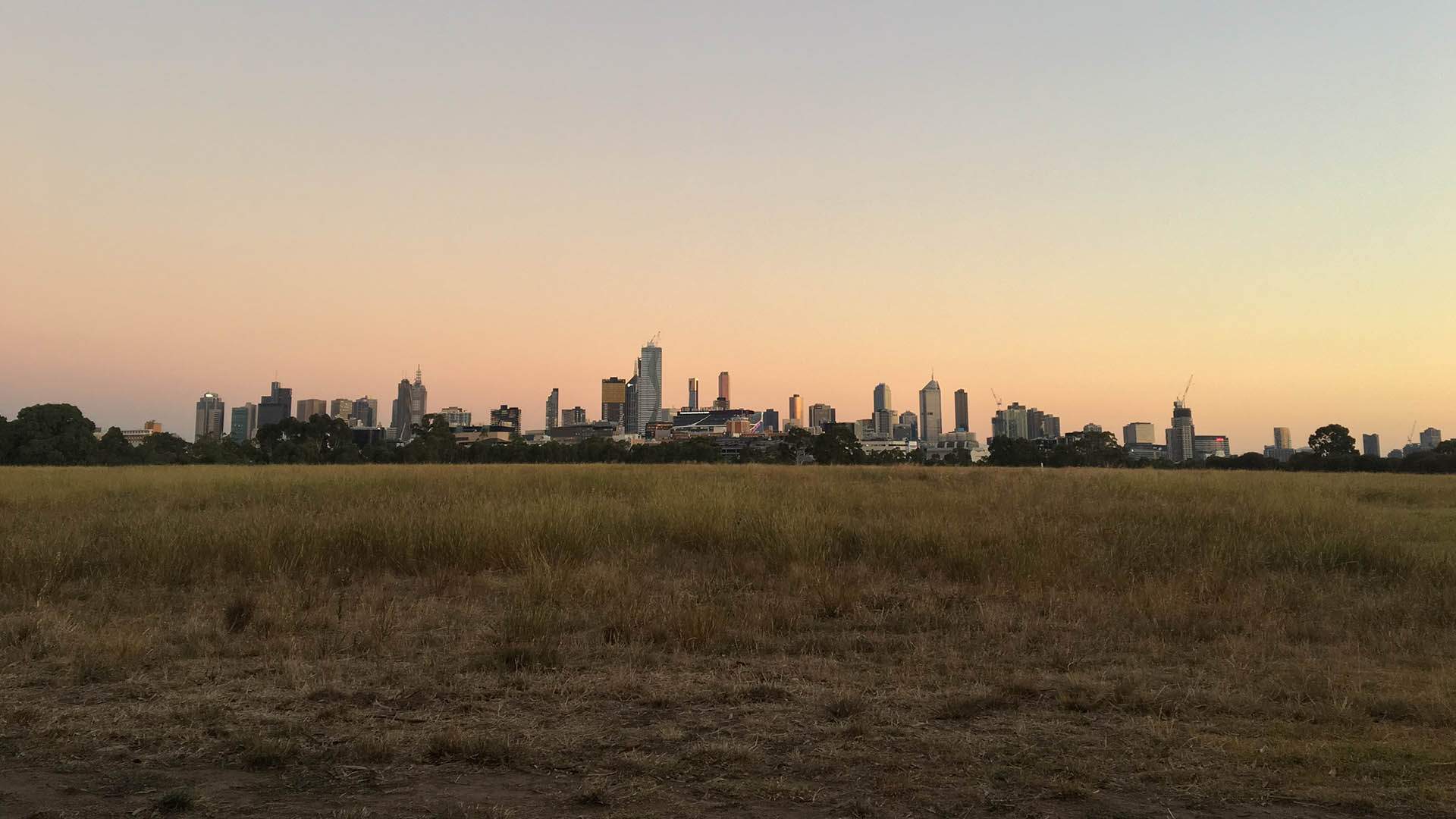 At over 180 hectares, Royal Park is the biggest park in the City of Melbourne, offering a giant expanse of green to offset the busyness of nearby Royal Parade and Flemington Road. You can loop the eastern half in around 90 minutes, or bump up that step count by adding a spin around adjoining Princes Park or Melbourne Zoo. Or, take advantage of the winding trails that weave through the park's interior, moving amongst bushland, lakes, sporting grounds, grasslands and plenty of wide open spaces. Keep an eye out for the Australian Native Garden, the Burke and Wills memorial, and lots of native flora and fauna while you stroll. For a bayside jaunt that remains pretty flat the whole way through, venture west and jump aboard the section of the Hobsons Bay Coastal Trail linking Altona Pier to Williamstown. It's a low-impact trek boasting sparkling water views along much of its length, with natural wetlands shaking up the scenery as it curves through parts of the Jawbone Flora and Fauna Reserve, and Altona Coastal Park. Keep an eye out, too, for some of the trail's famed outdoor artworks, including Pauline Fraser's Seaborn — a collection of bronze and steel structures standing guard over Altona Pier. The best part? No matter which end you finish at, you can reward yourself with a post-walk dip — weather and restrictions permitting, of course. Trick your brain into thinking you're miles away from the big smoke, by embarking on a nature-filled trek through the Darebin Parklands. Nestled in amongst the residential streets of Alphington, this bushland park serves up 33 hectares of tranquil public green space, providing a picturesque, leafy escape. A loop around the perimeter clocks in at around three kilometres, moving you amongst native vegetation and past the cheekily named Mount Puffalo — a hill built out of dirt from the Domain Tunnel. The park's brimming with wildlife, including 70 different bird species and the odd kangaroo. It's also got a large off-leash dog area if you find yourself with a four-legged walking buddy in tow. If you're keen for a dose of striking coastline, wild bushland and secluded beach, the Bushrangers Bay Trail is sure to impress. Located on the lower tip of the Mornington Peninsula, this 2.6-kilometre jaunt kicks off from the historic Cape Schanck lighthouse, winding alongside basalt cliff tops and through wildlife-filled banksia groves. You're in for million-dollar ocean views from the top, so be sure to leave yourself plenty of time to soak it all up. A final steep descent then unfolds onto Bushrangers Bay beach, where there are lots of rugged rockpools to explore. The journey back up is a little less forgiving, though the scenery is definitely worth any muscle burn. This inner-city coastal trail is one of Melbourne's most popular, free of hills, but always buzzy and offering ample opportunity for people-watching. Between the iconic St Kilda Pier and the western stretch of Port Melbourne, you'll cruise along an easy, flat foreshore track providing non-stop water views as the backdrop. There are venues peppered all along the foreshore should you need to refuel with a coffee or snack, and if you time your walk after sunset, you might even catch a glimpse of St Kilda Pier's resident Little Penguins. For extra feel-good vibes, take a breather at the Port Melbourne dog beach and make some new four-legged mates. Weaving through picturesque suburban parkland between Brimbank Park and Southbank, the Maribyrnong River Trail stretches 28 kilometres in full — which means options galore for anyone wanting to hit the pavement west of the CBD. As the name suggests, this one offers some top-notch river views as it meanders through a variety of bushland, grasslands and serene open reserves. It's mostly flat and very accessible, making it the ideal low-effort trek. Be sure to stop at the Lily Street Lookout for a great glimpse of the city skyline, and to pay a visit to the Living Museum of the West when you reach the leafy grounds of Pipemakers Park. 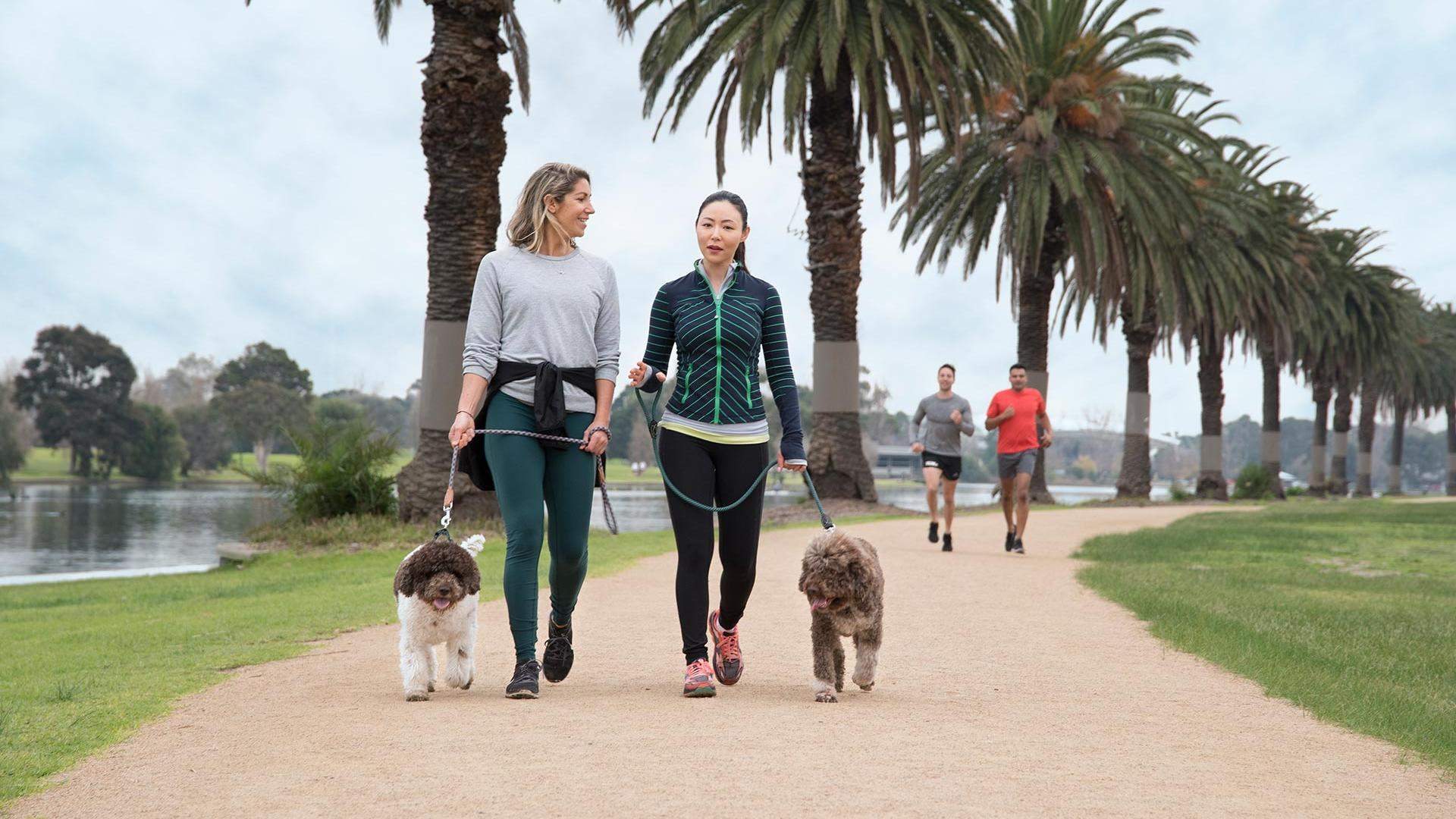 An easy three kilometres from the CBD, the spacious precinct of Albert Park is packed with flat walking trails, picnic areas, open spaces, drinking fountains and of course, that iconic namesake lake. All of that makes it a popular choice for local walkers and joggers, while the dog-friendly tracks mean there's always plenty of furry pals to be seen, too. The park's main loop trail circles the whole thing in just under five kilometres, with distance markers located at every 500 metres — if you're counting. As for the outlook, it's a scenic mix of grassy spaces, tree-lined lake and city skyline. 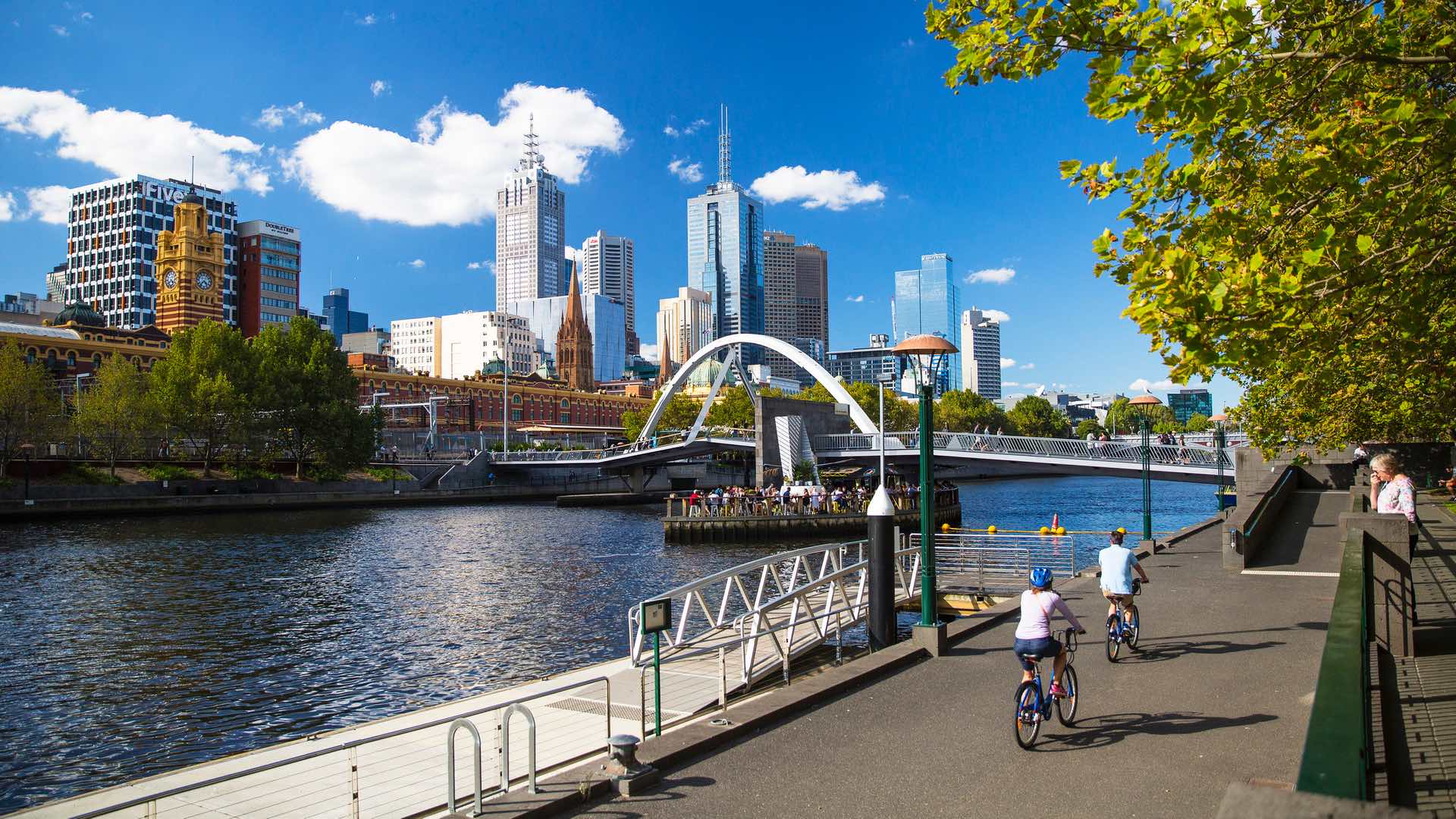 One of Melbourne's best-known urban walking tracks, the Capital City Trail takes you on a 29-kilometre loop around the CBD and inner-northeast suburbs, linking plenty of other popular routes along the way. For a tourist-style adventure, start at Federation Square and trek east along Birrarung Marr, before passing the iconic MCG. You'll cruise by the Yarra River through Burnley, curve north to swing past the historic Abbotsford Convent and then take a jaunt through suburbia across to Melbourne Zoo. The final leg of the trail heads south through Docklands and back along Southbank. It's a mostly flat and easy walk, plus there are scores of great coffee stops to be found along its length. For a relaxed trip through the best of inner-north suburbia, get your kicks on the well-trodden Merri Creek Trail. This one stretches 21 kilometres between Dights Falls and the Western Ring Road at Fawkner, with a variety of bush, creek and parkland sights to spy along the way. You'll walk past horse paddocks, scenic lookouts, tree-filled reserves and wide open spaces galore. Pooches are also allowed to join in the fun, as long as they stay on-leash. If the weather's decent and restrictions allow, pack a picnic — there are scores of leafy locations to throw down a rug and give those feet a rest. And if it's open, a stop-in at CERES Community Environmental Park is always a top idea, for chook sightings, plant purchases and a feed.

Published on September 10, 2021 by Libby Curran