The Best Bike Rides In and Around Melbourne

From leisurely city rides to stunning coastal climbs, here are the best spots to glide around on two wheels.

Thanks to the warm mornings and late sunsets of summer, there's no better time to reunite with your two-wheeled friend and power through on the pedals. Whether you want to ride across town, whiz downhill, or simply take it slow and meander leisurely through suburban parks and gardens, there's surely a bike track that can lure you back into the saddle. So gear up for a Sunday afternoon ride — or a sweaty Saturday morning calve-defining workout — because Melbourne has plenty of bike trails that will get you wheeling all around the city and the suburbs. For a cycling journey that winds past Melbourne's most historical and iconic landmarks (and with plenty of opportunities for coffee stops, to boot), you can't go wrong with this flat and car-free 30-kilometre city loop. Grab a share bike from a CBD corner and enjoy being a tourist on wheels, whizzing along the Yarra River past Docklands, Melbourne Zoo, The Royal Botanical Gardens and Dights Falls.  If 30 kilometres sounds a bit too far, it's easy enough just to do a portion of it, whether that's South Bank to Burnley Gardens, Moonee Ponds Creek to the Melbourne Exhibition Centre or Abbotsford to Parkville. FOR A SALTY SEA BREEZE: THE BAYSIDE TRAIL

Give your helmet hair a touch of the beach windswept look on this leisurely 18-kilometre trail along the coastline of Port Phillip Bay. Start at the Westgate Bridge and pedal past Albert Park and Port Melbourne before arriving at the huge mouth of Luna Park in St Kilda. Your destination is the lovely bayside town of Brighton. Don't let the length scare you — it's mostly flat and should only take about two hours. Once you arrive in Brighton, sink your feet into the soft sand and treat yourself to fish and chips. If there's more fuel in those legs, keep riding another 27 kilometres along the coast to reach Carrum. 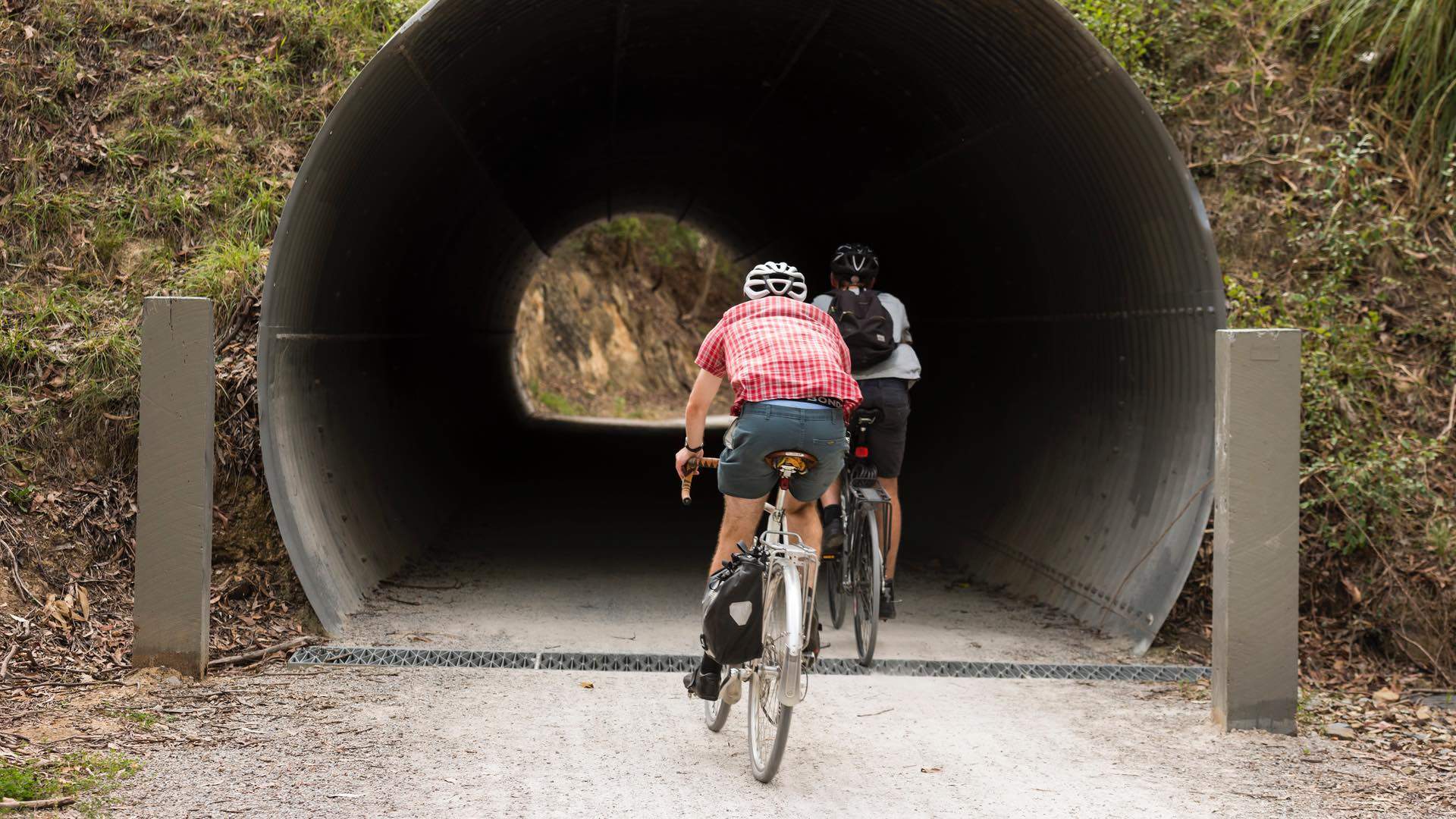 Most likely the inspiration behind 'Ain't No Mountain High Enough', this 40-kilometre path will have you testing the gears on your bike (and the muscles in your calves) as you climb and fly from mountain to valley to river. Following the historical railway line that begins at the old Lilydale Rail Station, the trail passes through the vineyards of the Yarra Valley, over quaint restored bridges and through lush farmland and forests. Apart from the stunning mountain views, you'll likely catch plenty of horse riders and walkers on the way too. Finish off at the quaint town of Warburton, where you'll quietly collapse — rightfully so. 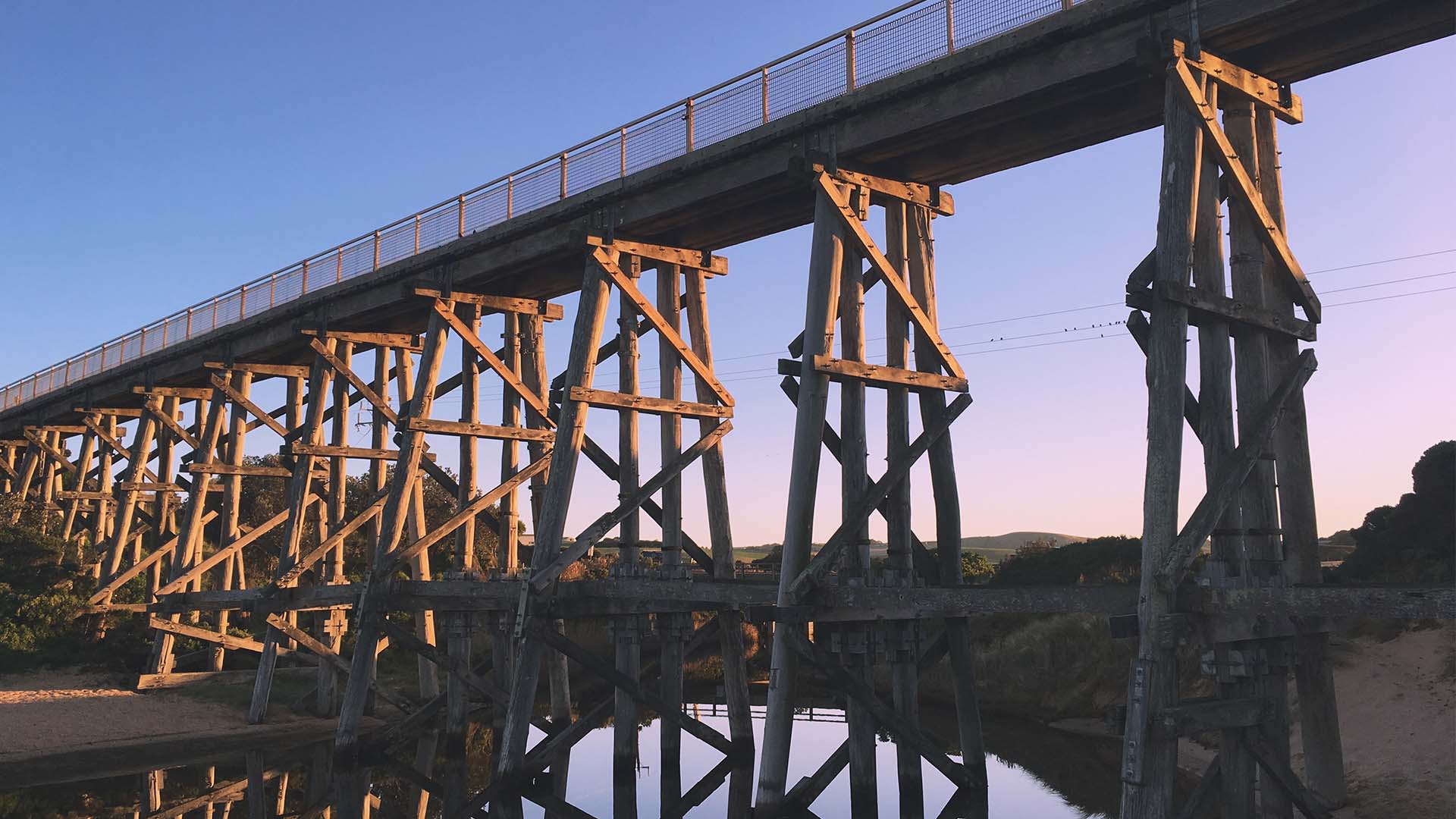 Get out of the city and into the saddle with this track on the Gippsland coast, which has recently been extended to cover 21 kilometres. Offering broad views of the coastline and rolling hills of the regional area, the Bass Coast Rail Trail will take you through old coal mining country. The trail starts at the old Wonthaggi railway station and winds through to the Woolamai Racecourse. It's rough and patchy in parts, but the adventurous soul will find joy crossing the old Kilcunda Trestle Bridge, which is surrounded by the crashing surf — not to mention the stunning views of the Bass Strait. This 21-kilometre trail meanders through the best of northern suburbia — starting at the inner city waterfall oasis at Dights Falls and continuing past hidden horse paddocks and up to Coburg. It's an easy breezy ride of wide open spaces, perfect for throwing down a rug for a picnic luncheon or for a spot of frisbee along the way. Highlights include Coburg Lake Reserve (which offers the most impressive playground you will ever lay eyes on), the Brunswick Velodrome and the CERES Community Environment Park. If 21 kilometres isn't enough for you, you can continue the trail where it joins the Western Ring Road Trail to the north or the aforementioned Capital City Trail to the south. A local favourite among cyclists for its sparkling river views of the Yarra (yes, even the Yarra can sparkle), this trail starts in Southbank and stretches out to Melbourne's eastern fringe for 33 kilometres — and you can ride it in either direction. Pleasant on the old legs, the compact dirt path is fairly flat for a blissful ride past ancient gums and billabongs. You might even get to hear the sweet native calls of the competitive rower. Finish off with a picnic at Westerfolds Park in Templestowe. Be sure to give your legs a good rest before you make the long (yet leisurely) return trip. Serious lycra-clad road cyclists need look no further than testing out their Tour de France skills on this steep climb (animal blood transfusions not required). Named after the average gradient of this lush and green route in the Dandenong Ranges National Park, the 6.8-kilometre ride is a beautiful one, but also terribly challenging. It climbs along the Mountain Highway from The Basin into the dreamy village of Sassafras. On the way, you'll cycle through the fern gullies and grassy forests of Mount Dandenong's western side. This trek is genuinely for serious cyclists only, so do not attempt it if you're a newbie. FOR A BIT OF ART: BANKSIA PARK TO HEIDE

While you never forget how to ride a bike, your body might be a tad unkind if you don't move from the couch enough. Blow the cobwebs off your two-wheeler and get that body moving again, starting with this short five-kilometre track. Begin at Banksia Park and follow the fruit trees and gums along the Yarra River and into Heide Sculpture Park, where a healing garden is slated to open imminently. Whizzing past contemporary sculptures, it's not a bad way to get active and see some art at the same time. And it'll take you just two hours return to make this trip, so it can easily be done in an arvo.