Ten Films From Sundance We Really Want to Come to Australia

Movie fans, prepare for your first wave of film envy for 2016. On January 21, the Sundance Film Festival kicks off its annual celebration of cinema in the snow — and that means a host of celebrities are headed to Utah to party with Robert Redford, and a new batch of indie titles are about to premiere.

Last year, we were so consumed with excitement about the program that we outlined the ten flicks we desperately wanted to see on Australian screens — and with Mistress America, The End of the Tour, Dope, Kurt Cobain: Montage of Heck and Sleeping With Other People on our list, we had a pretty good hit rate (if we do say so ourselves).

So, what's got us buzzing this time around? Well, theres a few documentaries, a mermaid thriller and an all-star cast in a film named Wiener-Dog, to name a few standouts. Here's our picks of the films we hope Aussie audiences will get the chance to watch, either courtesy of a local release or a festival — plus a few more we've got our eye on. HUNT FOR THE WILDERPEOPLE

There's plenty about this flick that appeals: its manhunt for a rebellious kid and his foster uncle storyline, and Sam Neil and Rhys Darby featuring among the cast, to name a few. However, most of our enthusiasm for Hunt for the Wilderpeople stems from the involvement of Taika Waititi. To date, the New Zealand filmmaker has brought us the charming Boy, directed episodes of Flight of the Conchords, and co-starred and co-directed one of the funniest flicks of the past few years, the vampire mockumentary What We Do in the Shadows. With Marvel sequel Thor: Ragnarok coming up next, he's clearly bound for bigger things, but this eccentric comedy sounds like vintage Waititi.

Also watch out for: Sing Street, another music-focused flick from Begin Again director John Carney — this time about an Irish teen in a glam-ish band. LO AND BEHOLD, REVERIES OF THE CONNECTED WORLD

More and more documentaries keep touching upon the topic of the technology we're all now unable to live without. The latest comes from none other than the great Werner Herzog, which marks his first factual effort since Into the Abyss five years ago. History and horror stories combine as he interviews a wealth of experts and tries to look at both the good and the bad of the online environment. And yes, the filmmaker provides the narration — because hearing his distinctive tones wax philosophical is all part of the Herzog doco experience.

Also watch out for: Under the Gun, a dissection of the firearms debate that continues to divide America. 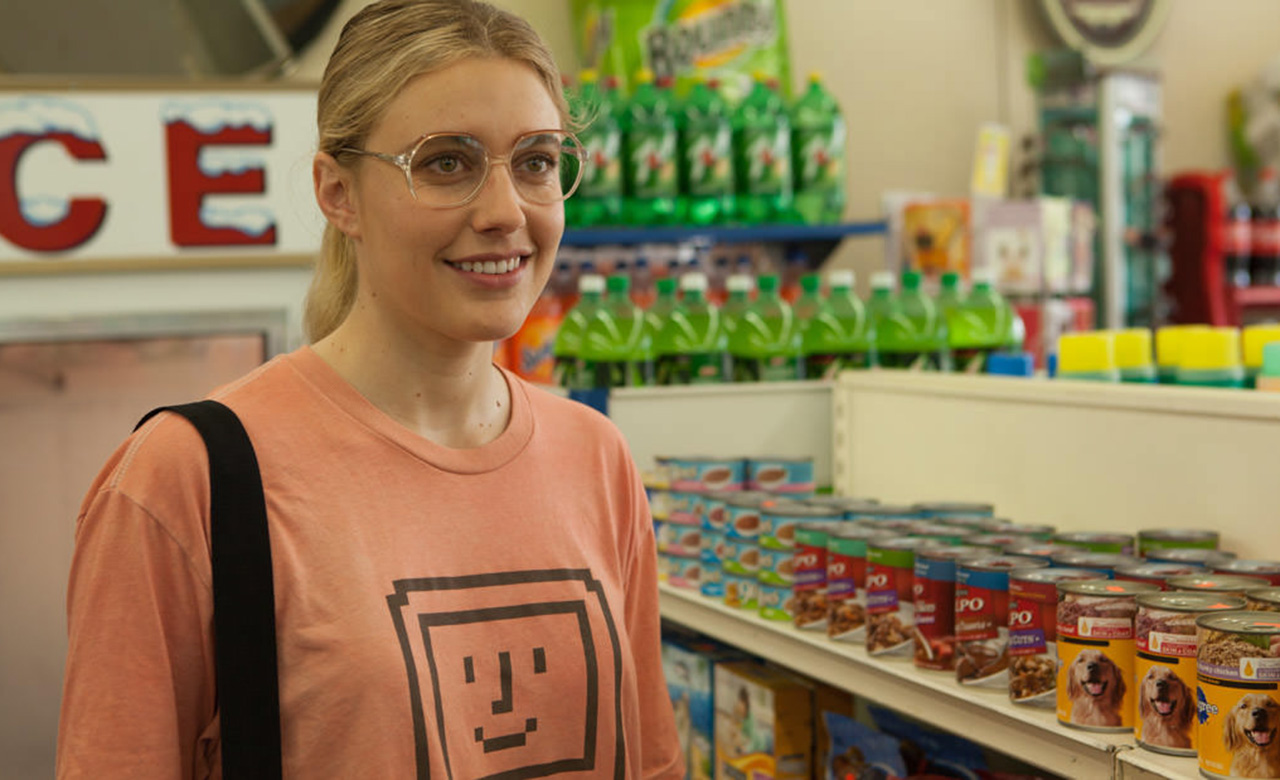 When is a sequel not quite a sequel? When it takes one figure from a film and inserts them into a compilation of tales. That's the case with Todd Solondz's Wiener-Dog, with its title referring to the as dachshund at the centre of its stories, as well as the Welcome to the Dollhouse character of Dawn Wiener (then played by Heather Matarazzo, now by Greta Gerwig) it crosses paths with. If you're a fan of the director or the 1995 feature, this is all good news. Plus, there's the cast, with the ever-luminous Gerwig joined by everyone from Kieran Culkin and Girls' Zosia Mamet to Julie Delpy and Danny DeVito. Another film, another set of intersecting stories — however, don't let the format deter you from Certain Women. In one tale, Laura Dern is immersed in a hostage situation. In another, Michelle Williams copes with marital problems in her new home. In the next, Kristen Stewart plays a lawyer-turned-teacher. All three segments are tied to a vision of America's midwest that sees the women forge paths forward. If you're not already sold, knowing that the movie is directed by Kelly Reichardt — who previously worked with Williams on Wendy and Lucy and Meek’s Cutoff, and most recently helmed Night Moves — should take care of that.

Also watch out for: Love and Friendship, which sees Whit Stillman reuniting with his The Last Days of Disco stars Kate Beckinsale and Chloe Sevigny for an adaptation of an unpublished Jane Austen novella. If you think there's just not enough mermaid-related horror flicks, then The Lure should catch your attention. Aquatic sirens feature quite prominently in the feature debut of Polish director Agnieszka Smoczyńska, as does a tale of romance, some bloodlust and a neon-lit dance club. Yep, this is a musical affair as well as a scary one, coming together with what Sundance describes as "a knack for both burlesque and the grotesque". If it can live up to that description, consider us pumped. And even if it can't, it has to be better than one of the last films to chart this territory: the exactly-as-bad-as-it-sounds Killer Mermaid.

Also watch out for: Convenience store clerks, Johnny Depp playing his character from Tusk, and plenty of silliness in the next Kevin Smith effort, Yoga Hosers. In 2012, Kenneth Lonergan's Margaret finally found its way to Australian cinemas. Problems and delays had plagued the film for years — the Anna Paquin-starring effort was actually made in 2007 — however if ever a film was worth the wait, it was this one. Thankfully, Lonergan's latest doesn't seem to be suffering the same fate — we're just hopeful that it will deliver. Here, a loner handyman has to take care of his teenage nephew and face a past tragedy. The underrated Affleck brother, Casey, leads a cast that also includes Kyle Chandler and Michelle Williams.

Also watch out for: Belgica, the new bar-set, Soulwax-scored film from Belgian writer and director Felix van Groeningen, who was nominated for an Academy Award for his polarising The Broken Circle Breakdown. THE BIRTH OF A NATION

If you know your film history, you should've already heard of a film with this title. Back in 1915, filmmaker D. W. Griffith made a silent, black and white chronicle of the American Civil War. The film is still considered ahead of its time in a technical sense, but was courted for its stance on race and depiction of the Klu Klux Klan. Now, actor-turned-director Nate Parker (Beyond the Lights) uses the same name for an effort charting a real-life slave rebellion in 1831 — and there's a statement in his choice of moniker, of course. He also stars on screen, alongside Armie Hammer as a slave owner.

Also watch out for: The Office's John Krasinski steps behind the camera as director for The Hollars, a family comedy featuring Anna Kendrick, Margo Martindale, Charlie Day and Sharlto Copley. He might be known for delving into the life and death of both Amy Winehouse and Ayrton Senna in two of the last decade's most powerful docos — that'd be Amy and Senna — however, Asif Kapadia also has a few narrative features on his resume. Ali & Nino marks his return to non-factual storytelling, adapting the novel of the same name. This time, he examines a clash of cultures in Baku between 1918 and 1920. Given that the film explores a romance that springs up between a Muslim Azerbaijani boy and Christian Georgian girl, expect plenty of tension between traditional and modern ways in this politically-charged love story.

Also watch out for: Southside With You, a romance about a guy called Barack and a girl called Michelle. We know who you're thinking of — and yes, we mean those ones. When Holy Hell was first announced in the Sundance lineup, it didn't list the director. Filmmaker Will Allen initially kept his identity a secret — which, considering the subject of his documentary, is more than a little understandable. For 20 years he lived inside a secretive spiritualist community led by a charismatic guru, filming everything that went on. That footage forms the basis of the doco, however Allen also shares his own recollections, and interviews fellow former members of the community. He ponders not only the organisation he devoted two decades of his life to, but the lengths people are willing to go to in search of happiness.

Also watch out for: NUTS!, a doco that tells the so-crazy-it-must-be-true tale of the small-town doctor who tried to cure impotence by transplanting goat testicles into men. We're serious. You've seen Clea DuVall in the likes of The Faculty, Girl Interrupted, Argo and TV's Carnivale — and now you can watch her directorial debut. In The Intervention, she stars as well as guides Cobie Smulders, Alia Shawkat, Natasha Lyonne, Melanie Lynskey, Jason Ritter and Ben Schwartz through a weekend trip that doesn't quite turn out the way everyone thinks it will. Four couples head away for what seems like the usual booze-soaked holiday, however, the apparently jolly jaunt also doubles as an intervention. Yep, this one is a dramedy, making the most of the dramatic and comic talents of its ensemble of performers.