Each curio has a story — and can tell us a lot about ourselves.

Each curio has a story — and can tell us a lot about ourselves.

From slabs of dirt that represent Sydney's landscape to evidence of complex rituals in neolithic times, there's a lot of history to unpack at the University of Sydney's new museum. Opened in 2020, bringing together objects and artworks from across three of its existing collections, the Chau Chak Wing Museum can entertain you for hours. And as it's free to explore, you can return to learn a little more about each item's storied past. To give you a slice of what you can find inside its cube-like structure, we asked Deputy Director of the Museum Paul Donnelly to tell us about five objects of enduring curiosity. 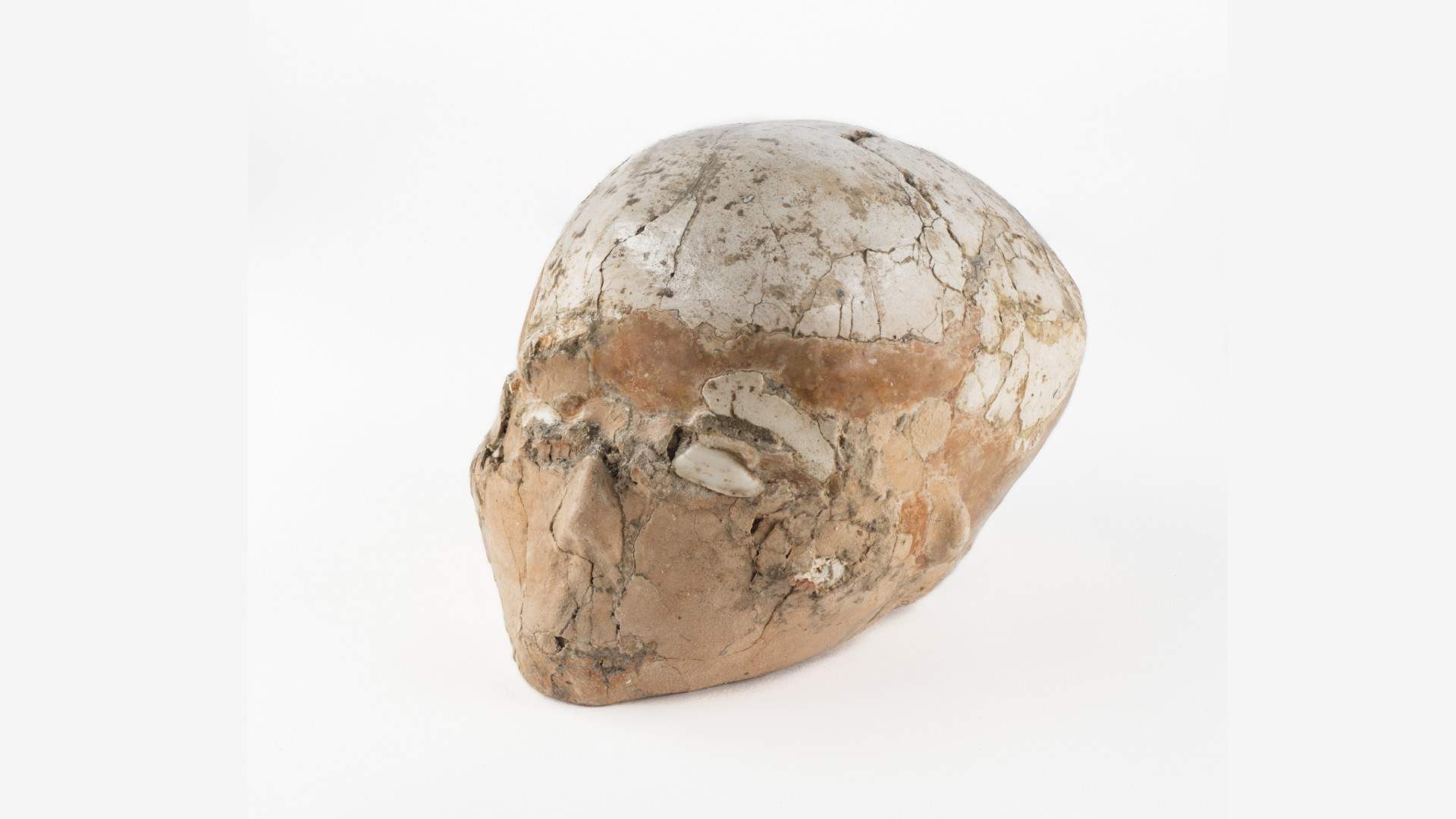 It might seem a little morbid to start with a plastered skull, but this human cranium tells us a lot about our shared histories. "It's 9,500 years old," says Donnelly. "One of 11 found in Jericho in the 1950s by Dame Kathleen Kenyon, who is the doyenne of archaeology in the Middle East." Archaeology students will know her from the Wheeler-Kenyon method of excavation. And visitors of the British Museum will know its 'sibling' skull, found in the same place and time. Donnelly tells us it's the skull of an adult male, which they can tell from the sutures of the skull and shape of the brows. Its lower jaw was removed and it has been defleshed and covered in mud plaster, and if you look closely, you'll see marine shells in place of its eyes. Thanks to its condition, we can also tell its use. "Our interpretation is this was likely to be ancestor worship," says Donnelly. "We know from historical periods in that part of the world that there was a monthly ceremony in which they would dine with their dead ancestors. The elite would go into their relatives' tombs and have a feast with the long-dead relos. We're very fortunate to have an item like this at the Museum." One of the benefits of opening a new museum has been the impetus to undergo complex conservation projects. One of those projects was rebuilding an ancient Egyptian floor fresco, from hundreds of little pieces found during excavations at Tell el-Amarna in the 1920s. "The new museum has provided lots of opportunities to display more material — we now have three times the material on display than before," says Donnelly. "Tell el-Amarna has held a fascination for people because it was the Canberra of ancient Egypt in the 1300s," he says. The ancient city was established in 1346 BC by Pharaoh Akhenaten as a new capital centred around a new, singular deity. "Akhenaten decided to abandon all the gods except for Aten, the sun god." It was a short lived tenure, and afterwards the culture returned to its pantheon of gods. "It's a fascinating period to have a pharaoh go down this bizarre monotheistic path. When I look at this pavement, I see all the connections to the individuals we have been fascinated with for millennia. In this particular fresco, it's from a royal temple made for the daughter of Nefertiti. It's possible to imagine that both Akhenaten and Nefertiti walked upon that very fresco." The oldest handmade item in the Chau Chak Wing Museum isn't immediately obvious, and it mightn't be what you'd expect. The 500,000-year-old object, on display in Object/Art/Specimen, resembles a significant moment for humanity. "The Acheulean hand axe is at least 500,000 years old," says Donnelly. "It's from the time of homo heidelbergensis, who were advanced enough to be using handmade stone tools." The axe was found by independent researcher Jacques Boucher de Perthes in the 1830s — and its discovery led to a lightbulb moment in a devout period of time. "He found them in the gravel pits of northern France in the same context as extinct megafauna, and even in the 1830s they knew these animals had long been extinct. So it was this lightbulb moment for him that suggested that we were older than what was proclaimed in the Bible." Boucher de Perthes published his theory in a book, which is on display next to the stone axe. During the Second World War, the University of Sydney was home to a top-secret research project led by Professor Frank Cotton. His mission: to keep pilots from blacking out when they hit extreme speeds in fighter jets. "As fighter planes became more manoeuvrable and faster, they were hitting the kind of G-forces that would pull blood away from the head into the legs," says Donnelly. "And pilots were blacking out." All around the world, scientists were responding to the issue — and Australia's response was a rubber anti-gravity suit. "The rubber pants went up to the waist. When the pilot hit dangerous G-forces these air sacs would inflate and compress the legs, so there was nowhere for the blood to pool into." Though the rubber suit never saw combat, it was successful in its trials, explains Donnelly. On display in the museum are sections of the suit: rubber pants, boots and pipes that would have connected to the plane. They're just a selection of 170 bits and pieces discovered in the Anderson Stewart Medical Building at the University in the 1990s, 50 years since they were stored away in the human centrifuge built during the covert project. The Chau Chak Wing Museum brings together items formerly housed in the Nicholson Museum, the Macleay Museum and the University's art collection. One of its early criticisms was that bringing art, objects of science and antiquities together "didn't fit", which is playfully honoured in the opening exhibition Art/Object/Specimen. It's where you'll find an artwork created for the Sydney Biennale 1982, featuring mounted squares of earth, sand and pebbles sourced from across the city. "To see soil and sand and rocks mounted as art, I thought that was fantastic," says Donnelly. The archaeologist was particularly drawn to Sonfist's work, which had been wrapped up for 30 years at the University. Now visitors can view it next to a portrait of Charles Perkins and measuring chains that were used to divide up and commodify land. "It's all about what people bring to the objects — and how they become different in relation to other things around them," he says. "One person's art is another person's object, is another person's specimen."

The Chau Chak Wing Museum is free to attend. It's open from 10am–5pm on Monday–Wednesday; 10am–9pm on Thursday; and 12–4pm on weekends. The Museum will be closed from December 23–January 6. It will reopen on January 7, 2021.

Top image: 'Love' by Robert Indiana (1912) and 'The Earth of Sydney' by Alan Sonfist (1981) courtesy of Chau Chak Wing Museum, University of Sydney.