When only futuristic chic will do, check out these ten space-age stays around the world.

Forget partying like it’s 1999. When only futuristic chic will do, boutique hotel experts Mr & Mrs Smith recommend these ten space-age stays around the world.

Where: No 2 Dickson Road, SingaporeWhat: Witty wonderland in Little India

When you fancy your own pocket rocket, book a stay in a sultry, space-themed Whimsical Loft room at Wanderlust boutique hotel in Singapore. Each comes with a kooky storage rocket and cute alien soft toys; climb the ladder to the mezzanine bed where sparkly ‘stars’ light up the ceiling. All of the 29 boudoirs are fairly otherworldly, with themes ranging from monster typewriters to treehouses and ultra-bright Pantone-hued chambers. Not sure where you’ve landed? It’s not surprising, given there’s a cool French bistro downstairs, you’re in the vibrant Little India quarter and this is central Singapore.

Bestriding an elevated park in the Meatpacking District, The Standard High Line hotel in New York is a modernist high-rise perched on concrete stilts. Clamber aboard and you’ll hit the space-chic black-and-white lobbyside Living Room, where you’d expect to see Han Solo and Chewie sinking cocktails with bounty hunters. Keep going up and the views from the 337 bedrooms just get ridiculous (cue Hudson River and Statue of Liberty perving on upper levels). Enjoy on-trend grazing at the Standard Grill, the German Biergarten and the 18th-floor Top of the Standard bar, then bag black-and-gold guest bikes for gadding around (who needs a space cruiser?). 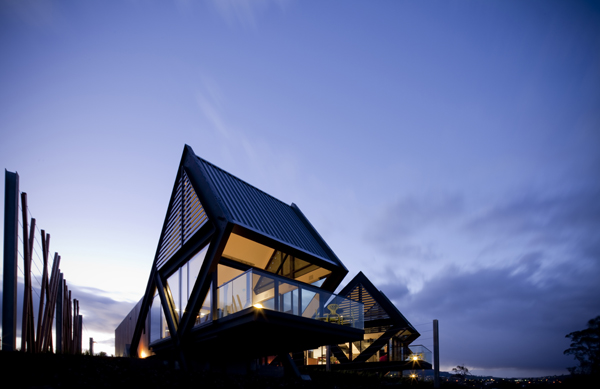 Where: 655 Main Road, Berriedale, Tasmania, AustraliaWhat: Avant-garde art hotel on the banks of the Derwent

The eight cutting-edge dwellings at MONA Pavilions hotel in Hobart are inspired by iconic Australian artists and architects, and come with original paintings, cool coffee-table books and rad river views. Bag three-storey pavilion Roy, and you’ll be master and commander of your own faceted-metal penthouse-come-spaceship, with two bedrooms, a state-of-the-art kitchen/living area and a balcony spa bath. Beyond your designer den, the hotel’s Source restaurant is a must for dining, wine tastings and microbrewed beer. Make time to visit MONA (Museum of Old and New Art) next door, an awe-inspiring subterranean gallery stocked with controversial modern art, a bar, café and wine bar. Ready for lift off? You’ll feel like you’re about to shoot into space when you settle back in the cabana lounge bar at Alila Villas Uluwatu boutique hotel in Bali, a sleek, wooden-slatted cube which centilevers over the Bukit Peninsula’s cliffs with va-va voom ocean vistas. The 61 light, white pool villas here are just as contemporary and crisp, embracing the outdoors. A superb spa, sexy infinity pool and serious surfing will tempt you to play, with dreamy dining areas for fuelling up afterwards. Be warned: this hip haven attracts the beautiful people, so get ready to waft around like a model from Mars.

As if the Catalan capital isn’t stylish enough, Spanish hotel Mandarin Oriental Barcelona will fulfill all your interior design fantasies. Nestle in informal, all-white brasserie Blanc, with its origami-style ceiling sculptures and hanging plants, and you’re on Planet Chic. Rooftop Terrat’s poolside loungers seduce with crazy-beautiful skyline views or get every more chilled-out at the so-sleek-it’s-space-age spa. The 98 rooms sport furniture by Spanish designer Patricia Urquiola, whose graphic shapes and patterns across chairs, rugs and cushions are out of this world. You’re on the city’s premier avenue, too, so Gaudi buildings, hot shopping and foodie pit-stops await.

Shaped like a sinuous stingray, Saffire boutique hotel in East Coast Tasmania brings futuristic style to the jaw-dropping Frecinet Peninsula. It may look like a metallic silver spaceship swooping towards curvy Coles Bay, but don’t worry this is no alien abduction scenario. Inside, you’ll find the lofty lobby, and ultra-contemporary dining and drinking areas, clad in an undulating roof and wall-to-wall windows giving onto the Hazards peaks. Pop to rated Palate restaurant for fab local fish and seafood, then relax in the retro-chic Saffire Lounge for booze and boardgames. Outside, 20 sleek suites, with views out to the beach and sea, beckon. Where: 1 The Knolls, Sentosa Island, SingaporeWhat: Clash of the centuries retreat

Lording it over Singapore’s southern Sentosa Island, 112-room Capella Singapore hotel is a luxe blend of colonial and 21st-century design, with a future-forward extension by architects Foster + Partners bringing this historic haven bang up to date. Take in views of the South China Sea from the three-tiered pool or sweeping Bob’s Bar terrace (ideal for that Singapore Sling), which borders on intergalactic glam; then hit Auriga Spa for treatments inspired by the lunar cycles. Chinese fine-diner Cassia is great for a date; all-day diner the Knolls is your go-to spot for breakfast, lunch or a wow-worthy selection of teas.

Expect close encounters of the third kind in the lunar landscape of Lake Powell hotel Amangiri, a swish sanctuary surrounded by the wind-carved Utah desert. This sleek sandstone sanctuary in the heart of Navajo country offers just 34 spacious suites, some toting their own private plunge pools. Curving around a striking escarpment, the main pool is a head-turner, too, with views out over the wilderness. Bring walking shoes and 40+ sunscreen for hiking over dunes and up rocks; Jackie O sunglasses and kaftans for poolside lounging or dining alfresco.

Clouds indoors? With sheep and illuminated mannequins? You’re in Italy, darlings, where stylish Milan hotel Maison Moschino, housed in the city’s first railway station, brings surreally spacey touches to any stay. Fairytale themes from Cinderella to Little Red Riding Hood create enchantment in the 65 rooms, from outsize frocks above beds to forests and golden glam. Maison Moschino’s kookily irreverent philosophy continues in the starkly sleek restaurant, where the masterful chef whips up colourful ‘susci’ (Italian sushi) creations, alongside pasta and meat mains. At the Culti Spa, treatments are based around beauty-aiding Brittany sea water. Ditch the spacesuits, though; Moschino threads will do. With 21 floors of cool rearing over the Lower East Side, glassy-glam Hotel on Rivington in New York is very 2001: A Space Odyssey. This modern missy ain’t for vertigo sufferers though, so be sure you have a head for heights before booking into one of the 108 rooms; boudoirs offer panoramic views through floor-to-ceiling windows, and some boast showers with vistas, or a two-person Japanese soaking tub. LES hipster style rules at cosmopolitan eatery CO-OP Restaurant, where sushi and sashimi are served alongside smart American concoctions. Decor-wise, the influence is Seventies California, with photographs of US icons (Neil Armstrong should be one of them!).