Words like 'sustainable' and 'eco-friendly' are bandied about left, right and centre these days, but few restaurants really take them on as unswervable principles. After all, going green isn't easy — it means all kinds of adjustments, from making friends with organic farmers to working out what to do with food waste, to installing solar panels and revamping your larder (so it's stocked full of nasty-free ingredients).

Ahead of this weekend's massive FOOD FIGHT event, raising awareness about food security in Liverpool and South Western Sydney (part of the Museum of Contemporary Art's C3West program), we looked beyond hollow, bandwagon-jumping buzzwords and found the real sustainable foodies in the city. Here are ten Sydney restaurants and bars that are actually walking the walk. 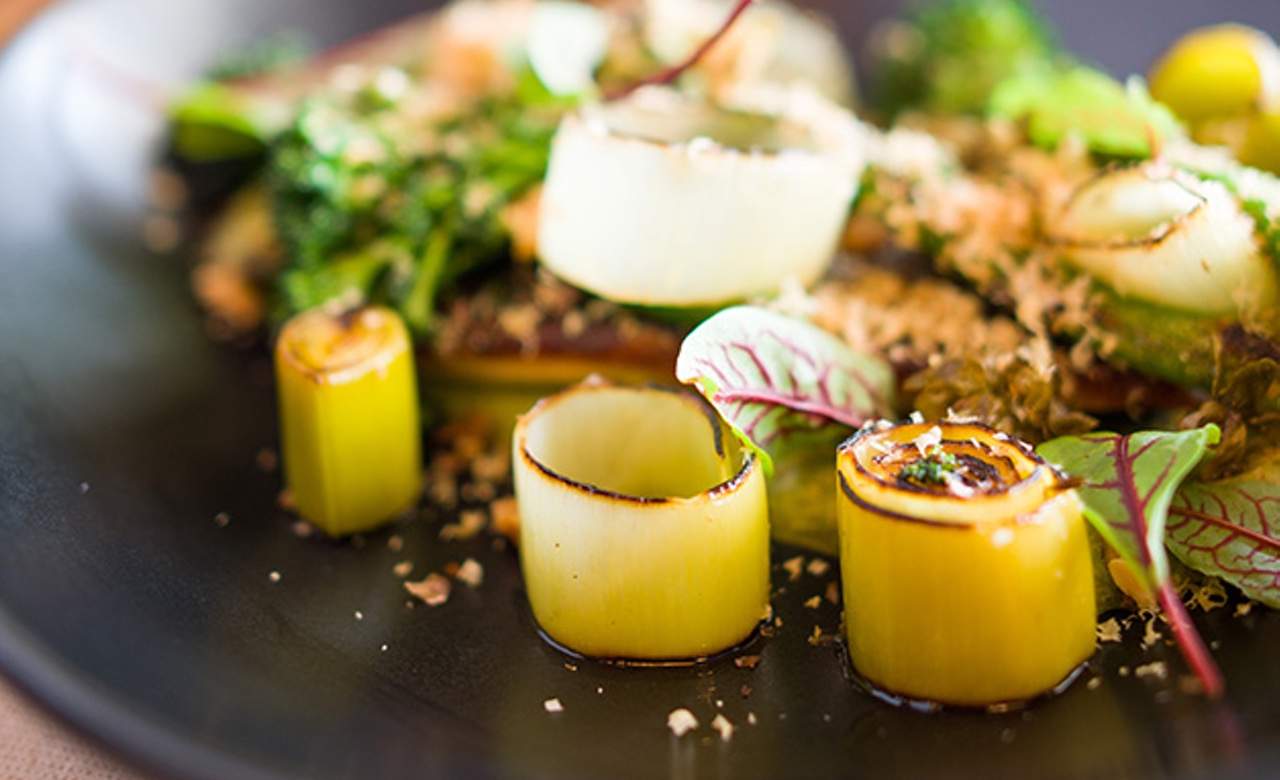 This Bronte-based cafe is evidence that sustainability doesn't have to involve compromising on taste. In fact, Three Blue Ducks serves up one of Sydney's best breakfasts, which is why you'll be queueing, should you swing by on a weekend. Chef/owner trio Darren Robertson, Mark LeBrooy and Shannon Debreceny maximise the business's eco-friendliness by sourcing produce from their farm in Byron Bay, generating power from rooftop solar panels, sending all organic waste straight to local residents and community gardens, and serving takeaway in biodegradable containers. What's more, Three Blue Ducks is famous for its support of Grow It Local, an initiative that promotes and celebrates urban farming. Another water-conscious eatery is Nomad. To avoid wasting thousands of plastic bottles, owners Al Yazbek and Rebecca Littlemore use a Vestal system for filtering, chilling and carbonating. 10 percent of the cash made from water sales goes to the Whole World Water Fund. What's more, Nomad gets its charcoal from Aussie sawdust mills that process plantation pine and recycles all paper, cardboard and plastic. If you're tucking into a wood-roasted suckling pig or half-smoked Holmbrae chicken, you can have peace of mind in the knowledge that it free-ranged before hitting your plate, while every fish on the menu is line-caught. Given that Australia is the driest continent in the world (after Antarctica, where most humans can't live comfortably for long anyway), conserving our water supplies is crucial to our sustainable future. And that's why Red Lantern, the most awarded Vietnamese restaurant on the planet, has installed its own rain tanks, as well as a wok cooking system that works without a drop of water. The majority of produce comes from organic farms and used-up cooking oil heads to Cookers, where it's turned into bio fuel. Red Lantern head chef Mark Jensen is so passionate about sustainability, he's written a book about it. THE GROUNDS OF ALEXANDRIA

The Grounds' green efforts start at the most fundamental (and important) of levels: by offering you significant rewards for car pooling and cycling. After all, vehicle emissions are among the biggest contributors to greenhouse gases. So, should you rock up with four or more people in your car, you score valet parking and one free coffee. And, should you and your mates turn up on bikes, you ALL get free coffees. In addition, there's an onsite composter, which means that scraps go directly to The Grounds' organic garden, which supplies bucket loads of produce to the kitchen. It's also a lovely spot to sit. Way before sustainability was the new trend on the block, chef/owner Sean Moran was hanging out on his farm in Bilpin (near the Blue Mountains), nurturing crops and tending to livestock. He brings his creations to his Bondi Beach restaurant, where he turns them into seasonal, hat-worthy dishes, like free-range chook roasted with thyme, parsnip puree and mushrooms, and dark chocolate pudding with cumquats and hazelnuts. Once the feasting is over, all scraps return to the farm, where they go towards growing next season's deliciousness. Winner of the Good Food Guide's inaugural Sustainability Award, which arrived in 2009, Billy Kwong has been been going green since 2004. In 2007, it became the first restaurant in New South Wales to go 100 percent climate neutral. Owner/chef Kylie Kwong puts as much emphasis on the small details as the big picture. So, in the pantry, you'll find a plethora of organic and biodynamic sauces, while, on your plate, the ingredients come from 30 small producers, with whom Kwong has developed close working relationships. The restaurant also takes part in a renewable energy credits program, through a wind farm in Hebei, China, and supports a stack of community projects — from The Wayside Chapel's rooftop community garden to Urban Beehive. 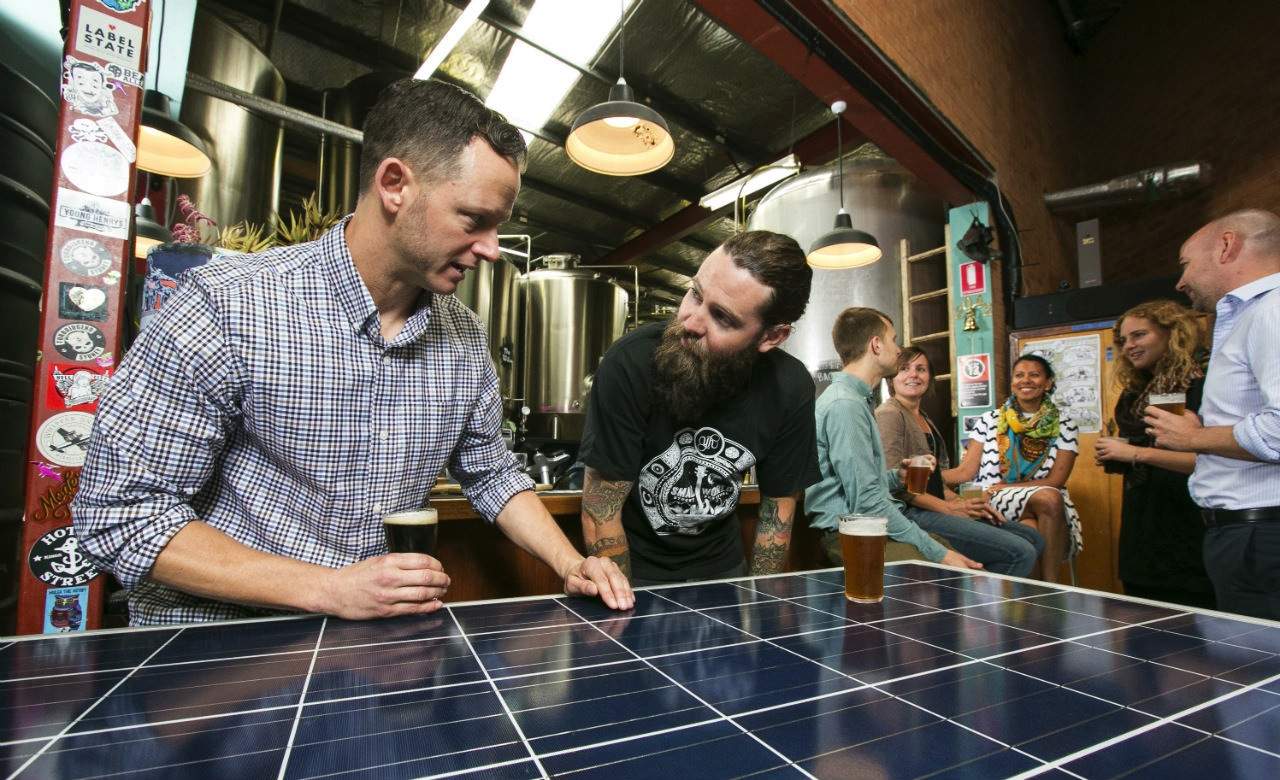 For a start, Young Henrys keeps travel miles down, down, down by brewing all its goodness in Newtown. Second up, those famous growlers are not only there to help you keep your fridge stocked up, but also to minimise glass production. Thirdly, every day, local chicken farmers receive one tonne of grain left over from the brewing process — which is way better than chucking it all out. Finally, in November last year, Young Henrys added to its already impressive efforts with the announcement that community energy group Pingala would build a solar farm on the roof. Knocking back a cold one has never been so good for the environment. Another joint harnessing the mighty power of the sun is Single Origin Roasters. Every time you sip on one of their coffees or grab a packet of their beans to take home, you can rejoice in the fact that all roasting was done by solar power, at Single O's headquarters in Alexandria. Plus, most beans come from small, environmentally-friendly and ethically-sound growers. And, more recently, the team played a role in developing a brand new invention: The Juggler Cafe Milk Tap System, which makes sure that not a single drop of milk is wasted during coffee-making. Been wondering how Bondi's Best consistently churns out some of the best fish 'n' chips in Sydney? It's largely in the catch. Since this hole-in-the-wall opened in 2011, owner Joel Best has focused on serving up sustainably-caught seafood. Whether you're chowing down on tuna bruschetta with tomatoes, mushrooms and basil or Skull Island banana prawn linguini with chilli and garlic, you can rest assured that your feast has come from a responsible fisher. The Bondi Best team goes to market every morning to track down the freshest of the fresh. When you order a dish at this Rozelle-based restaurant, you'll know exactly where it comes from. The origin of every fish is listed on the menu — whether it's wild-caught flat head from Ulladulla on the South Coast or yellowtail kingfish from South Australia. Yes, it's exactly like that Portlandia pilot. But it's a genuinely good-for-the-planet business. Love.fish works only with environmentally-respectful fishers in Australia and New Zealand. Whatever's left over after dinner — from food scraps to napkins — is transformed into green power or organic fertiliser and every inch of packaging is recycled or reused. According to love.fish's website, "As a family of two small children we are increasingly aware of how accountable we are for their future."

Published on April 28, 2016 by Jasmine Crittenden