The Future of Gardening’s Looking Up

The Future of Gardening’s Looking Up

The further we move away from the wild, it seems, the more we bring the wild to us. From adding rooftop gardens to buses to cultivating bioluminescent plants that replace light bulbs to the opening of the world's first fully algae powered building, the past two years have seen a surge in the green-ifying of our urban environments.

The most visually dramatic movement of all has been the spread of the vertical garden. Of course, it's not necessarily a new thing. The Hanging Gardens of Babylon (or Nineveh), after all, were at least imagined, if not built, in 600 B.C., and back in 1938, Stanley Hart White, Professor of Landscape Architecture at the University of Illinois, employed hydroponics to invent the first green wall.

However, Patrick Blanc is the man behind the scattering of the seeds of "living architecture" all over the world. His vertical gardens have been planted in more than 25 cities, including San Francisco, Berlin, Tokyo and New York. As most Sydneysiders already know, he's just installed the tallest one on the planet right here, at One Central Park, Broadway. Twenty-one panels, filling 1,120 square metres of area, comprise its expanse. One hundred thousand seedlings, including exotic and native species, were established at nurseries all over New South Wales and Queensland. THE STORY STARTS BELOW SEA LEVEL

Blanc first became passionate about plants at the age of 12, due to an obsession with his fish tank. "My first aim, forty years ago, was to filter the excess nutrients out of my aquarium by way of using plants," he explains. For such a child, a career in botany was inevitable. It was in the 1980s that he first became interested in training plants to defy gravity — the perfection of which is crucial to the success of any vertical garden.

Now that he has the process worked out, he insists that it's technically straightforward. What can be trickier is attaching the plants firmly enough to the wall to protect passersby from an unexpected botanical deluge. They (the plants, not the passersby) are attached to mesh-covered felt, around which their roots cling as they grow, creating a secure stronghold. Mineralised water, rather than soil, provides a source of nutrients. When asked whether he's encountered any opposition to his projects, Blanc replies with a calm self-assuredness that his "living artwork" involves a mere mirroring of nature. "Some people have objections because they think it's a manipulation of the way nature intended plants to grow," he explains. "But this is not the case, well, not always. For a local example, at Wentworth Falls in New South Wales's Blue Mountains, rock-clinging plants are everywhere." At the Australian Garden Show, Blanc will be giving a lecture on how soilless plants survive in their natural habitats — cliffs, caves, waterfalls and tree branches. IT LOOKS GREEN, BUT DOES IT ACT GREEN?

And what about the environment? Vertical gardens certainly help to lessen the burden of some of our more regrettable architectural decisions, but how do they score when it comes to cleaner air and reducing energy use? Some of the installations found in fancy hotels and the like are often dependent on energy-intensive lighting. They might promote an impression of environmental awareness, but they're actually doing damage if the carbon harnessed by the plants is less than that necessary to their growth.

On this issue, Blanc states that making wise botanical choices is essential. "When planting indoors, it's a matter of choosing plants that are not full-sun," Blanc says. "So that lights are not required for many hours of the day."

Stephen Collis, of Victoria-based business Wallgarden, agrees. He sells DIY vertical garden systems for household use that are light on resource consumption. "All the products needed are very low cost ... With its patented irrigation system, [the Wallgarden] uses one-seventh of the water that a plant uses in the ground and it also has massive insulation. Plants grow best on north western facing walls (because they get the most heat). They insulate in summer and also in winter, by keeping the heat in." 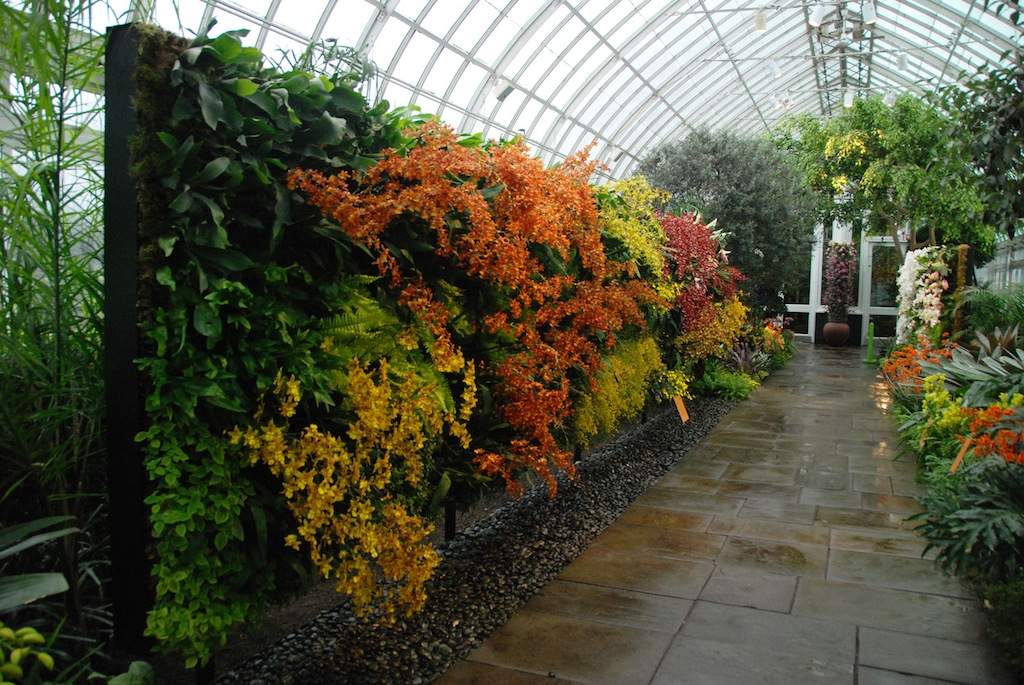 BEATING BACK THE WINTER BLUES

Both Blanc and Collis point out that vertical gardens can play a role in promoting mental and emotional health."Having a garden has a calming effect," says Collis, "especially in offices."

"Indoor vertical gardens can bring a world of colour to the depths of winter," argues Blanc. "Given indoor spaces are climate-controlled. This provides an opportunity for plants from warm countries to grow in cold countries." He works with diverse flora, the origins of which often lie in some of the planet's most obscure locations. Recently, on a visit to the Philippines, he even discovered a new Begonia species, which has been named after him.

Blanc has plenty of freedom to partake in international botanic and artistic escapades because his creations are really low on maintenance. As long as the watering system is functioning, pruning is required just once every few months. They can be expected to live for at least 31 years — Blanc planted one at his place in 1982 and it's still growing.

Patrick Blanc will be appearing at The Australian Garden Show, to be held in Centennial Park, Sydney, between September 5 and 8. He'll be speaking as part of the "Seeds of Wisdom" Lecture Series. On Thursday, September 5, at 5.45pm, he'll deliver "Cliffs, Caves, Waterfalls, Tree Branches: the Natural Habitat for Soilless Living Plants", and on Friday, September 5, at 4.15pm, he'll discuss "The Vertical Garden: A Forty Year Innovation". Each 45 minute lecture will be followed by a 15 minute Q & A. Wall Garden will be exhibiting a vertical garden and conducting DIY demonstrations.

Published on September 02, 2013 by Jasmine Crittenden