A Guide to the Best Radio Apps

In a world so rammed with visual stimulation, it is incredible to think that the simplicity of the sound of a voice is still an engaging notion.

2012 seems too future a year to still be talking about radio. Invented so many moons ago, how is it possible that radio has dodged the inevitable demise of all other pre-internet devices for information dissemination? And yet, radio is an almost unchanged, non-visual, intangible medium that has managed to engage an audience for over one hundred years. Perhaps it is the pared back simplicity of the sound of the human voice which has enabled the wireless to endure. Or perhaps it's the ability of radio to act as a constant companion – from beside buddy waking us from sleep to background fodder in morning traffic to emergency weather warnings in far corners of the state. Radio possesses a remarkably static history but it is also a diverse, easily accessible technology and one too which has developed through the advent of podcasts and on-demand radio apps.

A friend recently introduced to me the This American Life app, and here I quickly spiralled into the world of radio apps. There is beauty in the voice of someone’s story and it makes excellent feed for light-on small talk (although beware the compulsion that can ensue). Other people’s stories are addictive and here, a second warning; radio streaming is a data killer — either get yourself an unlimited data plan or make good use of your workplace wireless.

In a world so rammed with visual stimulation, it is incredible to think that the simplicity of the sound of a voice is still an engaging notion. We love stories and with the world just a touch pad away it is all primed and waiting to be streamed (data limit pending). Here are some of Concrete Playground's favourite radio apps to get you started. For those not yet savvy to the sounds of host, Ira Glass, This American Life is a long-running, weekly one-hour program on America’s public radio station NPR. Each week TAL takes a theme and presents a number of stories on that theme. For example, a 2011 program on gossip looked at the relationship between gossip and the AIDS epidemic in Malawi. The Held Hostage program of 2012 told of a Colombian late night radio program where families of victims of kidnapping call in to send messages to their loved ones, hoping that they are still alive and might just be listening in. The beauty of TAL lies in the lateral consideration of each theme and, most importantly, in the classic tools used to create the stories for radio.

TAL is one of the few radio programs to provide a program-only app (Radio National, are you listening?). It is not free but $2.99 is a small price to pay for access to the entire TAL archive, including viewing of the two seasons of the TAL television series. All programs can be streamed, saved for offline listening or alternatively downloaded for a small fee. It is a simple app to use with a clear layout, search bar, full descriptions of each program and labels to mark shows as read or favourited. Planet Money is an economics-for-dummies radio program, also on NPR. I first heard about Planet Money through my obsession with TAL as the team from Planet Money frequently guest programmes TAL. Primarily though, it is a twice-weekly show and the app is an excellent entry into the program with accompanying articles and their additional appearances on TAL, All Things Considered and Morning Edition.

Don’t think you need to know about economics? Think again. Understand economics and you start to understand how most of how our world operates. Highly recommended for dazzling cocktail party swagger when it comes to impressing all. Your education starts here. More interested in British radio? BBC Listener is the app for you. With a great old-school wireless interface this app can immediately transport you to the cool tombs of the BBC studios of the 1950s. BBC Listener is especially curated for an international audience with a weekly delivery of 20 of the best BBC programs for that week. Programs are divided into genres and are accompanied by visuals – still and video.

Price: One month free trial and then $3.99/month. The app is free to download. With the American and British equivalents of the ABC (BBC and NPR) branching out into the world of apps, I guess it is only a matter of time before the ABC gets more serious about their digital platforms. Whilst we wait we are stuck with TuneIn.

TuneIn is a radio streaming app which gives you free access to thousands of radio programs across the globe, including Australia. It is a clunky app with no program descriptions and a search function which is a tad redundant unless you actually know what you are looking for. The upside is that when you don’t know what you want to listen to you can stumble upon some goodies. And with thousands of programs to choose from you have access to a diverse mix of radio from around the world. Much like TuneIn, Stitcher is a radio streaming app although with the addition of a personalisation scheme. As you listen and build up a stable of favourite programs, Stitcher will recommend other shows based on your listening habits ie. the app will ‘stitch’ together your own personal radio station.

Prefer not to have a computer claiming, ‘You might also like…’? Not to worry. Stitcher also lets you build this process yourself. 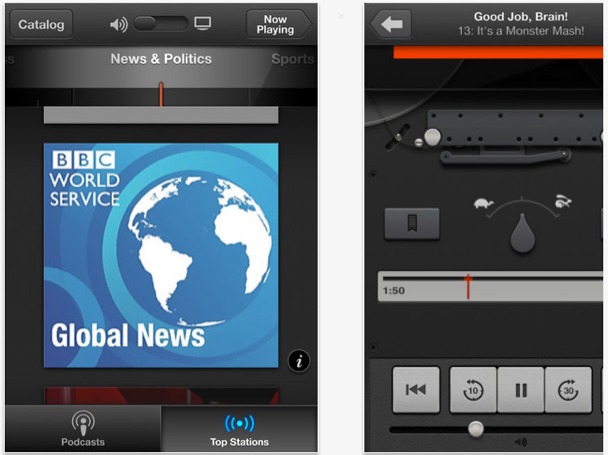 Now, all that I have said above is pretty much negated by the recent addition to the Apple stable, Podcasts. Although technically we have always been able to subscribe to podcasts and have them automatically appear in our iTunes – Podcasts make this process less complicated.

Podcasts is simple to use and holds all your subscriptions in one place on your phone. It connects to the iTunes store with just a swing of the window and includes full descriptions of all programs. Of course, it is reliant on your favourite radio programs providing podcasts, but most do. Radio National programs can all be subscribed to, as can BBC Radio programs and NPR. The beauty here is the ability to somewhat branch out of radio and discover some of the cross-platform spoken word interviews and stories which are only available as podcasts.