The future of museums is a bit William Gibson. As in, "the future is already here. It’s just not evenly distributed yet." One place with a pretty uneven head start — bringing the future to now — is the Cooper Hewitt Museum in New York City. A branch of the Smithsonian settled in a former mansion of the late magnate and philanthropist Andrew Carnegie. Its head start comes from being closed for renovations for three years. This gave it the chance to completely reinvent a lot of the things it did from scratch. Not least that whole internet, digital thing.

For its Sydney-raised director of digital and emerging media, Seb Chan, that was the appeal. Chan had been in a similar role at the Powerhouse Museum (now the Museum of Applied Arts and Sciences) and was very much attracted to "a chance to reboot" a whole museum and think "what could this be?" The Cooper Hewitt answers this question mostly with some pens. Visitors get handed a special black, rubber pen. Its smartphone-friendly tip lets you draw on interactive tables. The button on the other end lets it save the stuff you like. That's about it.

"There's no screen. There's nothing to learn," Chan says. You can click the eraser end against little information cards and use the pen to bring up more info on the tables. When you leave, you look up a web address on your ticket and all the things you looked at are collected for you. Seb hands me one he has with him. It feels good. "The pen itself is a capacitive stylus, with an NFC antenna and some memory. A small amount of memory: 8KB of memory. It doesn't have to be a lot." It is nicely weighted and well built. "It's a bookmark" he continues, "you're bookmarking the museum. That's all it is." That's not what you notice when you hold it. You want to point with it and you want to click. It feels built to just the right size.

The idea is to make the physical and the digital sides to the museum mix effortlessly. "We're at a moment where, just like the internet in your pocket, digital is not something special." The museum is following suit, trying to "embed digital within the fabric of the museum visit [in a way] that normalises it. That naturalises it. And makes it feel like it should be there." By the time people reach the second floor, they've stopped being amazed by the pens, by the interactive tables. They just use them: "That's success." 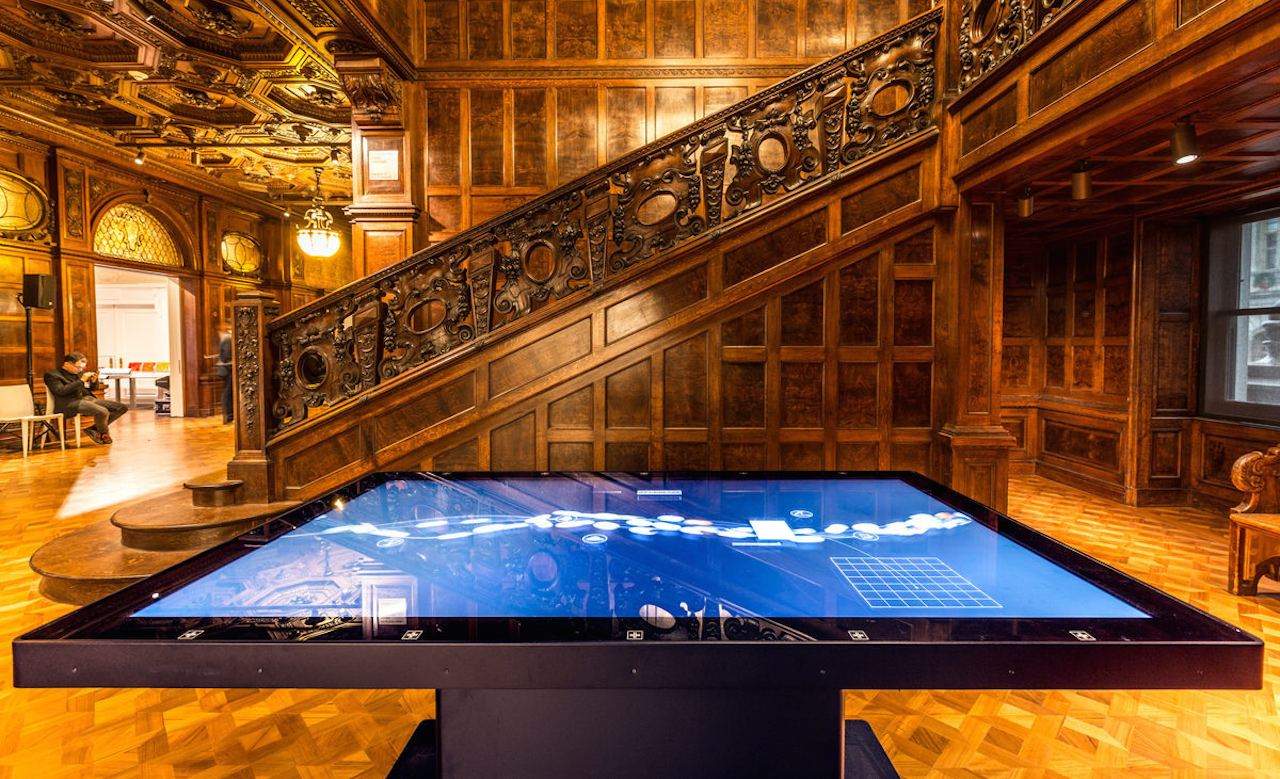 The pen gets all the attention at the Cooper Hewitt, but its not the only direction that museums are heading in. The smartphone is one of the fundamental shifts museums are just beginning to get their heads around. Why wouldn't people just look things up on their phone at home instead of coming in to see your stuff?

Like a cinema's giant screen to your puny big screen, museums are moving on to experiences that you can't get at home. Some of that is tech. Chan tells me about an exhibition he took his daughter to at New York's Museum of the Moving Image, Sensory Stories. The exhibition showcased 12 immersive, 3D documentaries using a virtual reality headset, the Oculus Rift.

And then there's room-sized, "remote sensing" setups. These spaces let you explore sites not safe to visit in person. I suggest to Chan that Palmyra might be that sort of site. "Or a world heritage site that's too fragile to visit. Or maybe the international space station. Or maybe the surface of Mars," he says.

Some of these not-at-home experiences are social. "That's one of the big shifts, I guess, in museums, is that they're now social venues." Most of these fixes are low-tech, like fixing the quality of coffee in the cafe. And the tech follows along. While the new Cooper Hewitt's interactive tables are 84", 4K high-definition screens, it's also important that they're big: "You can have as many as 12 people gathered around them. And when there are 12 people gathered around, you can bet they're talking." Where does this take us over the next ten years? Chan seems excited about the future of virtual reality, but sanguine. "VR is always an interesting piece with museums. And every ten years, there seems to be a new peak around this, and then it drops off again, and comes back again."

Then there's the issue of what to collect. Chan wonders. "What should we be collecting from now that's gonna be as important as, you know, the cuneiform tablets?" He's interested in software and code. Maybe financial code, "collecting the algorithms — the quants used — that triggered crashes [from high frequency trading]" or even Stuxnet. How to do Stuxnet: The source code? A copy of the virus? "Ideally, what you would want to collect is one of the Iranian centrifuges that was knocked out by it."

He points to Britain's Victoria & Albert Museum, whose experiments in "rapid response collecting" have seen it display a smashed Guardian laptop to talk about Edward Snowden or Primark cargo pants as a response to the Rana Plaza collapse in Bangladesh. YOUR DATA IS HERE, NOW

There's also a long game here. Museums have new tools in the shape of analysing visitor movements from new tech like Cooper Hewitt's pens or even just free museum Wi-Fi. How does ten years of that add up? "Ten years of understanding it."

Though Chan adds, "The challenge with analytics is that you're often collecting the wrong information. What I would hope is that it's ten years of people realising that we need to be thinking about how people behave and coming up with ways of understanding it."

Seb Chan is in Sydney to talk at REMIX Summit, where he'll be giving Wednesday's keynote 'No Boundaries - The Museum of the Future.' Concrete Playground is a partner of REMIX Sydney.