From the Outback to the Office: How R.M.Williams Has Evolved Over its 90-Year History

How much do you know about Australia’s most iconic bootmakers? The coveted pairs have a rich history and a lucky strike of a beginning.

The dusty arid landscape of Australia’s outback bore witness to the birth of a brand that has long held its icon status — R.M.Williams. Steady pilgrimages across deep red deserts, steering herds of cattle from atop trusty steeds, requires footwear that will go the distance. And since 1932, the leather boots have adorned the feet of those doing the hard yakka under relentless scorching rays.

R.M.Williams has evolved and shifted over its 90-year history. The company has garnered new wearers — from farmers and bankers, writers and artists, all the way to prime ministers and seasoned celebrities — taken international leaps and bounds and expanded into apparel and lifestyle items, all while retaining its excellence in both form and function.

From day dot in small-town South Australia through to today, pairs of RMs have been cherished, aspired to and worn over a lifetime. After the first store outside of Adelaide graced Toowoomba, cities the world over joined the party.

To celebrate its arrival to the nonagenarian era, we’re taking a deep dive into the history of the iconic boot brand to find out how it’s evolved over time. THE MAN BEHIND THE BOOTS

During the Great Depression, Reginald Murray Williams was 24 years old, which is a life stage where many of us are still getting our adulthood bearings straight. RM, however, was living with his young family on Adnyamathanha country in the Gammon Ranges, having secured work with the United Aborigines Mission doing odd jobs and digging wells (a gruelling task without much reward, financial or otherwise).

In a chance meeting with celebrated saddler Michael George Smith — a First Nations man known as Dollar Mick to most who knew him — RM inherited the itinerant stockman’s leatherwork finesse. When Smith needed a new pair of boots, the pair began fashioning a pair from one piece of leather. RM realised they were on to something and set newfound sights on crafting sturdy boots for cattle drivers. 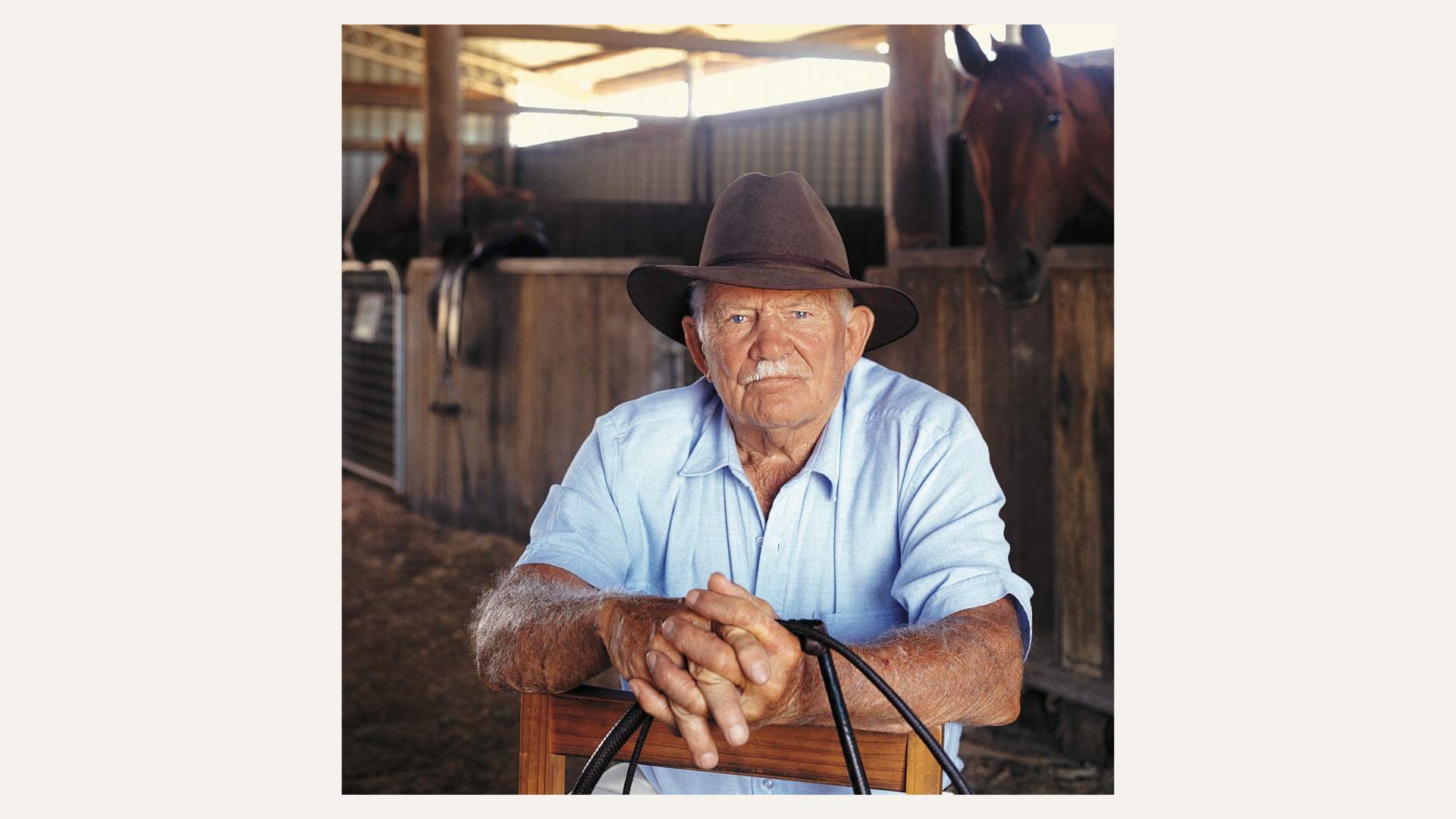 The young entrepreneur began designing what he considered the ultimate pair. After placing an ad in the newspaper, his first set sold for 20 shillings to a fellow passing through from the vast plains of Hilltaba Station — then, the ‘cattle king’ Sir Sidney Kidman bought a pair. The idea was off.

Within two years, in order to keep up with a thriving mail-order system, RM gathered a highly skilled group of people to expand the production capabilities of his wares and moved into his first workshop (in the woodshed out the back of his father’s Percy Street home, a site which now welcomes visitors to the R.M.Williams Outback Heritage Museum).

Not someone to keep to one lane, RM was a founding member of many Equine-related associations and leant heavily into the literary world too, establishing a publishing company in the 1940s and taking the reins of Hoofs and Horns magazine in the early 50s. Even today, R.M.Williams Publishing is a strong arm in the business, with Outback magazine continuing to tell the rough and beautiful stories of the bush.

Fortune as well as talent favoured RM. Luck struck the frontman hot when a small mine he procured proved fruitful, filling his pockets with gold. With his winnings, RM flourished further. “I used to stagger down the street to the bank with these bags of gold, a shotgun each side,” he shared.

The illustrious man is a national treasure — with former-PM John Howard’s nomination of RM as a National Living Treasure, and his 2002 patronage of Year of the Outback the pudding of proof.

THE LASTING CRAFT THAT EARNED FAME

Every element of an RM boot is precise. The hand-cutting of a single piece of leather to start the whole process off; the trademark woven tugs signalling style and function; and the signature red-gum stained soles individually painted to reflect the vivid earth from Down Under. It’s an art form, and the whole range is a cut above the rest.

Stepping into the R.M.Williams workshop in South Australia — where, iconically, every pair is made — you’ll be greeted by the rich, warm smell of fresh leather, staggering pieces of machinery and a hoard of expert craftspeople. It takes a well-oiled team to produce the lauded footwear, with each step of the process as vital as the last.

As the foundational building block, the slice of leather is chosen carefully, a fine balance between durability and softness the end goal — plus a splash of natural character for charm. For a boot made to flex under bodyweight and strong muscular movements controlling a horse, or do the legwork over the many steps taken in a week, comfort needs to join endurance.

Once chosen, the hide is cut then blocked, where high heat is used to shape the beginnings of a boot before the elastic sides are stitched in. With thick, purpose-made elastic guarding the wearers’ ankles, the need for laces is removed and grass and seeds are easily kept out (a trait less than necessary for the urban cowboys). Passing from station to station, hand to hand, the footwear takes shape under watchful eyes.

In the business of longevity, R.M.Williams finishes its process with a Goodyear welt construction. A singular ribbon of leather snakes its way around the outskirts of the sole, which is sewn to both the insole and upper. This tricky little manoeuvre separates your run-of-the-mill pair from those designed to go the distance, with the sole forever replaceable without altering the integrity of the boot. WHO WEARS THE BOOTS

Fitting onto the feet of the famous is one boast the brand does laps around. Bill Clinton was gifted a pair during his presidency, and on home soil, leaders from both parties have governed in RMs — Prime Minister Anthony Albanese was spotted in a pair just recently on his visit to Indonesia.

They are the official parade boot of the Australian Defence Force and have been favoured by patriotic equestrians for decades (even adorning the feet of the Olympic equestrian team in 1956).

In the arts world, Florence Welch has twirled in a pair and Courtney Barnett pulled on a well-loved set for her first time at the Grammys. Daniel Craig has strutted in his, and Hugh Jackman loves the brand so much he became its global ambassador. Actress Teresa Palmer is also an RM-lover, with the Thornton shearling coat joining the boots on her list of must-haves.

Fashion-wise, the reigning style lord that is Alexa Chung donned the Millicent with casual blue denim for an effortless daytime look, and homegrown talent Brooke Testoni has regularly been spotted pairing her RMs with floaty dresses and mini skirts. And really, if that’s not the prime example of the brand’s reach and versatility, nothing is. Excelling over 90 years is no easy feat. And for footwear purpose-built for mounted stockmen in the harsh Aussie outback, R.M.Williams’ icon status is evidenced in more than just its longevity.

After perfecting his boot-making process, with patience aplenty, the frontman and his team ventured into the creation of apparel and lifestyle items. Shirts and jeans joined the ranks, as well as hand-plaited leather belts and the famed drover’s coat.

Today, the breadth of products surpasses impressive, with picnic kits, thermos flasks, duffle bags, wallets, embossed belts, scarves, woollen socks and card holders in its repertoire. There’s even a care tin stocked up with everything you need to keep your boots in good nick, and a series of Makers Kits, which allow you to try your hand at leatherwork.

In 2020 — after a six-year stint under overseas ownership — the company was returned to welcome Aussie hands. Tattarang, the private investment group owned by the Forrest family, acquired 100% of the business and has sworn to champion the characteristics of the much-loved outback — those of courage, grit and undeniable character — throughout its ownership.

“If you make something good, people will make a track to your door,” RM once stated. I wonder if the man knew just how eternal those tracks would be.

To discover more to the R.M.Williams story, head to the website.