A First-Timer's Guide to Singapore

For a small island, Singapore sure packs a punch.

First-timers to the city may be tempted to skim its surface with a quick visit to Orchard Road, a photo stop at Marina Bay Sands and a meal at the nearest hawker centre. But dig a little deeper and you’ll begin to unravel Singapore’s rich cultural, historical and culinary heritage.

Without veering too far off the beaten path, your first visit to Singapore can encompass world-class dining, award-winning mixology, top-notch museums, vast natural landscapes, glimpses of military history and even adrenaline-filled encounters with cars.

We’ve worked with the Singapore Tourism Board to pull together some of the Lion City’s most compelling experiences to help you create an immersive adventure you won’t soon forget.

Hawker centres are woven into the fabric of Singapore, and there’s no finer example than Lau Pa Sat. Set in a Victorian-era structure in Singapore’s financial heart, this national monument houses a smorgasbord of edible delights. Expect everything from charcoal-grilled satay and hokkien mee to biryani and barbecued seafood.

Chicken rice is practically Singapore’s national dish and Tian Tian Chicken Rice, at Maxwell Food Centre, has it down to an art. The family-run stall opened in 1987 and has garnered a Michelin Bib Gourmand award for its perfectly poached chicken, fragrant rice and richly flavoured secret sauce.

Even before it opens each day, there are queues around the block at Hill Street Char Kway Teow. The Michelin-recommended stall is rightfully popular for its wok-fried noodles, about which the late Anthony Bourdain once asked: “How can anything this ugly be this good?” Like the city itself, Singapore’s fine-dining scene is wonderfully multicultural. Perhaps this is best exemplified by Candlenut, the world’s first Michelin-starred Peranakan restaurant. You can’t order a bad dish from chef Malcolm Lee, but save yourself from decision fatigue and ask for the 20-course (shared) tasting menu.

Michelin-starred Labyrinth, arguably Singapore’s most sustainable restaurant, is the brainchild of chef Han Li Guang. Inspired by local flavours, the former banker traded his suits for chef whites to offer upscale reinterpretations of Singapore’s hawker favourites. Dishes are always being fine-tuned — the chilli crab is on its ninth iteration. From shared-space pop-up to one of Asia’s — and the world’s — 50 Best Bars, No Sleep Club is a booze-fuelled success story. A gem of bustling Keong Saik Road, this all-day destination for stellar cocktails offers elevated pub grub and welcoming hospitality, too.

If brews are more your thing, Smith Street Taps brings the hawker centre experience to beer. This Chinatown stall features 20 rotating local and international craft beers on tap and has become a place for importers to test the waters before releasing new beers to the market.

The pandemic has pushed many of us in new directions, and that includes the trio behind Sago House, which was born from Singapore’s 2020 pandemic-imposed lockdowns. This raw-feel space, created mostly from upcycled materials, might feel unfinished, but the menu of both classic tipples and punny signatures — Don’t Go Bacon My Heart, Oregano Be My Girl — is a beautifully elegant counterpoint to the surrounds. A residential neighbourhood once dominated by Peranakans and Eurasians, the Katong/Joo Chiat area retains its cultural heritage with a contemporary twist. Delve into the area’s history at The Intan and Eurasian Heritage Gallery, then explore the pre-war shophouses that now house cafes and boutiques.

During Singapore’s colonial era, Kampong Gelam was an enclave for the Malay and Arab communities. Today, this neighbourhood honours its heritage but with a hip, modern twist. The district is anchored by the majestic Sultan Mosque, and visitors can explore its history at the Malay Heritage Centre before sampling traditional dishes at the Michelin Bib Gourmand-awarded Hjh Maimunah.

The oldest housing estate in Singapore, Tiong Bahru is worth visiting for its 60s and 70s architecture — but you’ll stay for food and shopping. Pick up decadent pastries from Tiong Bahru Bakery and hawker food from Tiong Bahru Market, browse local designers at Nana & Bird and sip coffee from Forty Hands. 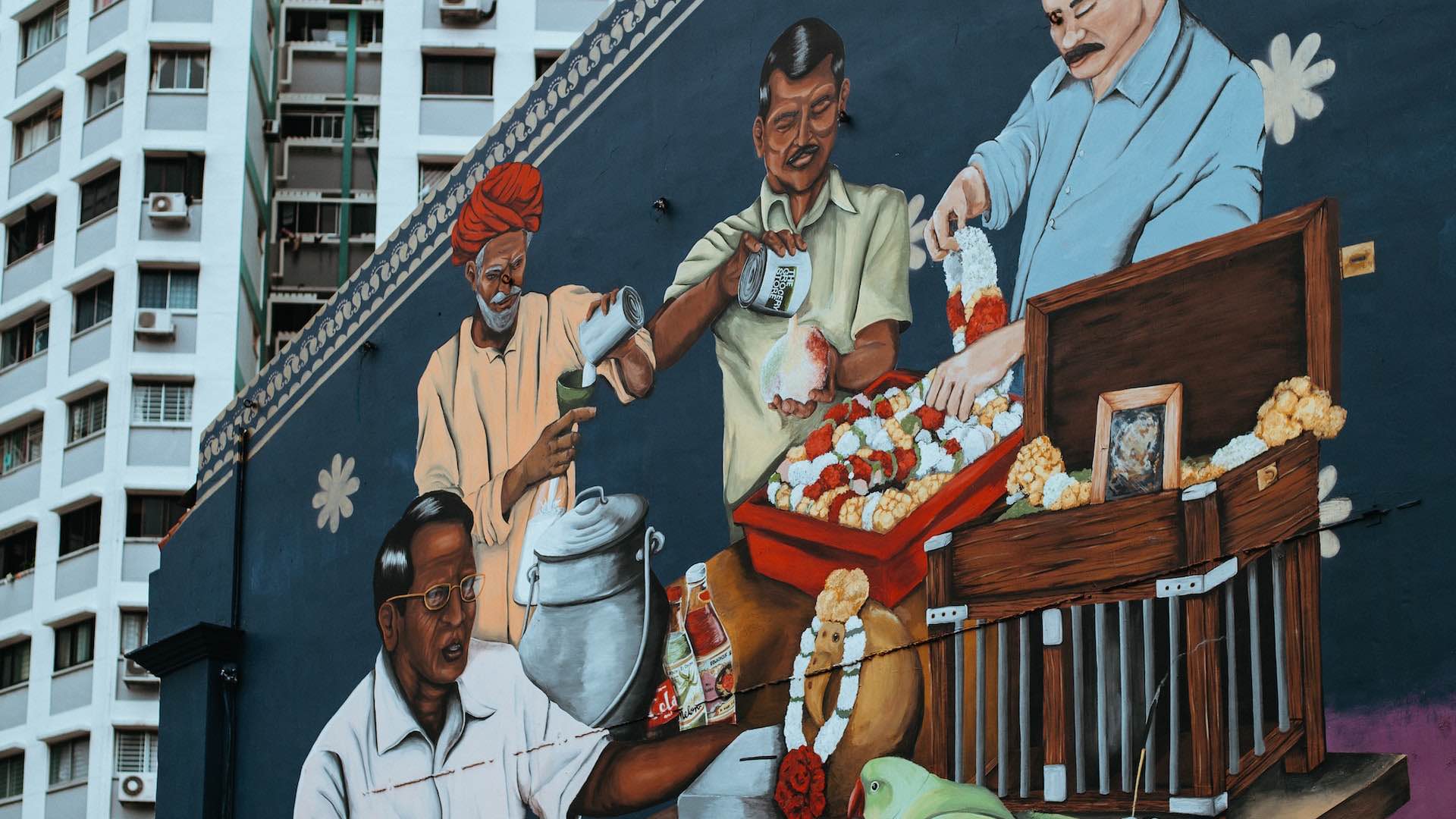 Created by converting the former Supreme Court Building and City Hall, the dazzling National Gallery of Singapore houses over 8000 artworks across its 64,000 square metres. Inside, you can explore the world’s largest public collection of Singapore and Southeast Asian art, and indulge in fine food and drinks.

Gaining independence in the 1960s, Singapore has a rich and complex history. Get to grips with it at the National Museum of Singapore, which was established in 1887 and explores the city’s art, culture and history through immersive displays and compelling galleries.

Working with world-renowned organisations including the Smithsonian Institute, the ArtScience Museum at Marina Bay Sands hosts major exhibitions that combine science, art, technology and knowledge. From sea creatures and Nobel Prize-winning ideas to multimedia art pieces and Disney, you never know what you’ll find at this fascinating institution. 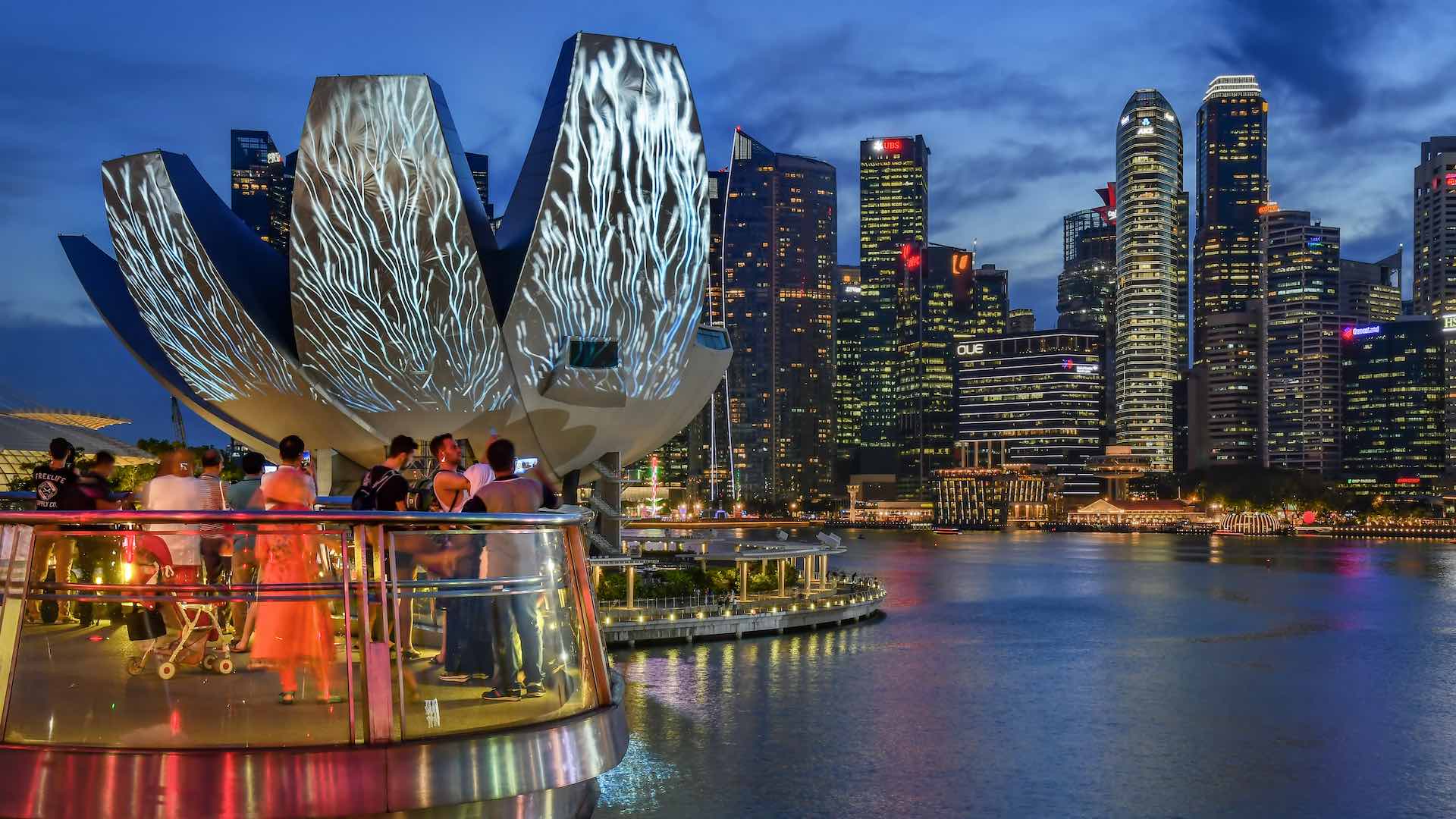 Singapore has a history that’s deeply interwoven with its military, and nowhere on the island brings it to life like Battlebox. An immersive attraction at Fort Canning, this World War II command centre is situated nine metres underground. Take a tour to explore the sprawling maze of corridors and rooms, and along the way, see how war came to Singapore and how the island fell to the Japanese.

A remnant of Sentosa’s military past, Fort Siloso is a decommissioned coastal fort that buttressed the British defence of the island. Head here to explore the World War II memorabilia (including the in-situ cannons) and fortified military structures.

Did you know Singapore became the home of Asia’s first Ford factory in 1929? Now, the Former Ford Factory — which is where the British surrendered to the Japanese in 1942 — hosts a compelling exhibition about the building’s evolution, the lives of pre-war Singaporeans and the island’s legacy of war.

Formula 1 hosts high-octane races around the world, but few can compete with the Singapore Grand Prix. Held on the Marina Bay Street Circuit, this is Formula 1’s first — and only — night street race. Fans come for the cars and drivers, but stay for the nightly entertainment. For 2022, Marshmello, Westlife, Green Day and the Black Eyed Peas will take the stage, among others.

Fancy getting behind the wheel yourself? The Karting Arena has a fleet of electric and Birel Art petrol-powered go-karts in two locations. Jurong boasts a 700-metre-long track with 11 turns, while the Bukit Timah track spans 500 metres and features nine thrilling turns. You can even compete in an F1 Grand Prix format with races of six to eight laps. Once a British military base, Sentosa is now a go-to destination for fun. The island hosts a slew of attractions, from golf courses and beach clubs to defunct forts and a casino. Highlights include the Adventure Cove Waterpark, the S.E.A Aquarium and the sprawling Universal Studios Singapore theme park.

The Singapore Zoo is arguably one of the world’s best places for an up-close encounter with the animal kingdom. Opened in 1973, the zoo now houses over 2800 animals in spacious settings that mimic their natural habitats. For a different perspective, visit the neighbouring Night Safari where you can see over 900 animals go about their nocturnal activities.

Always ahead of the game, Singapore got the first international outpost of the Museum of Ice Cream in 2021. Set in former barracks on Dempsey Hill, this pink-hued space invites visitors to unleash their inner child. And yes, you can indulge in unlimited ice cream while you’re there.

To find out more — and to start planning your Singapore getaway — head to Singapore Tourism Board’s website.