The pod bay doors have opened on Sydney's space-themed cat cafe. Named Catmosphere, this new food 'n' feline venture is home to fifteen cats in total, all of whom reside in style and comfort on the second story of a refurbished terrace on Fouveaux Street in Surry Hills. There's Deckard (named after Harrison Ford in Blade Runner) and Leeloo (Milla Jovovich in The Fifth Element) and Fuzz Aldrin (you get it) and a particularly striking black cat named Darth Beauty. Personally, we're smitten with Ewok.

The cat's room is separated from the food service area by special airlock doors — a council requirement, although it does fit quite nicely with the space age vibes. The cats, for the most part, seem unperturbed by our presence, although one or two of them eventually saunter over in the hopes of getting a pat. Still, it's safe to say, it's us fawning over them, and not the other way around. 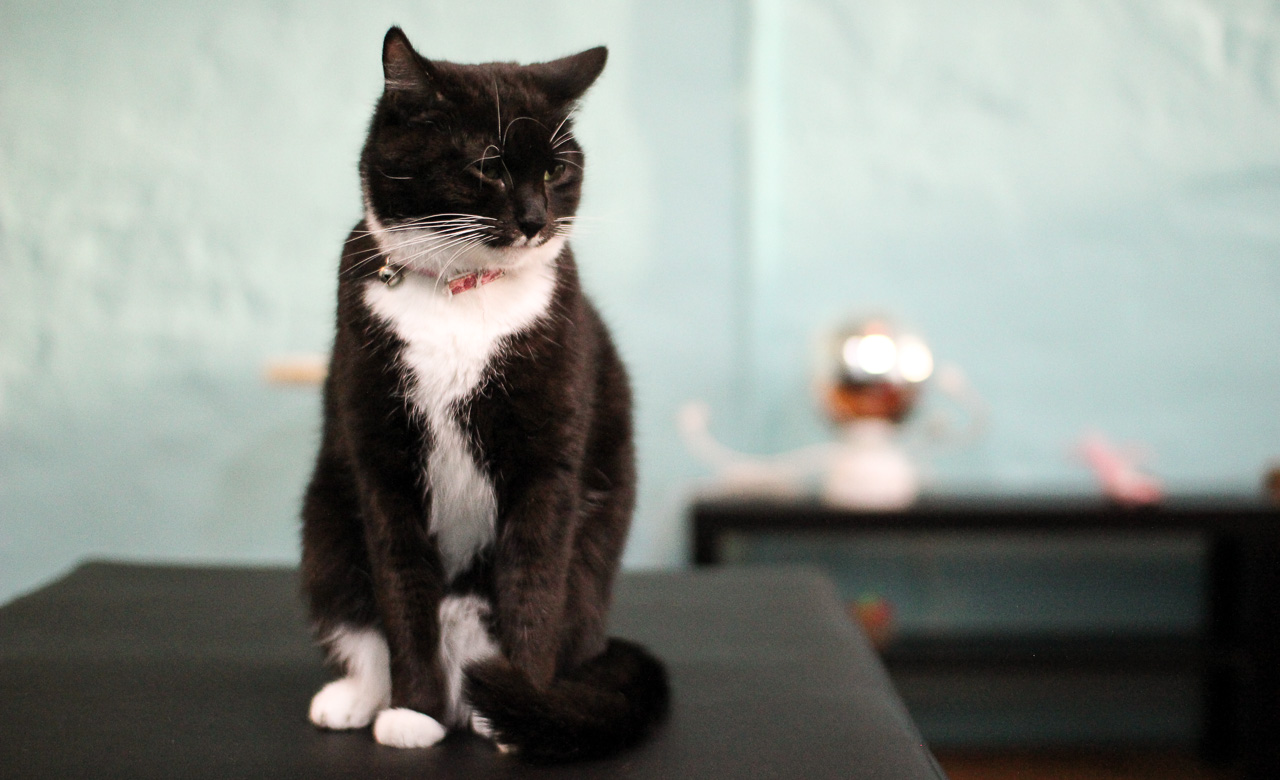 Catmosphere Sydney is owned by Thomas Derricott and his partner Wenee Yap, who were inspired after they visited the original Catmosphere in Chiang Mai, Thailand. After returning to Australia they set up a Facebook page to gauge community interest — and the community didn't disappoint. Local cat-lovers were soon falling over themselves to volunteer their time, while their IndieGoGo campaign raised more than $40,000.

Derricott and Yap also struck up a partnership with the World League Protection of Animals. As a result, the cats at Catmosphere are all rescues — and while they themselves aren’t up for adoption, Derricott does hope visitors to the cafe might be inspired to foster a furry friend of their own. So now that they're open, how does it all work? Visitors to Catmosphere Sydney can pay $20 to spend an hour with the cats, a deal that also comes with a complimentary coffee and cat shaped cookie. A maximum of 15 people are allowed in the cat room at a time, ensuring the feline-to-human ratio is never more than 1:1.

Downstairs, the cafe is run by Yun Xia, who previously managed the cafe in Kinokuniya. According to Derricot, the plan is for Catmosphere to provide a quality food and beverage experience independent of the cat theme, to ensure longevity once the novelty starts to wear off. Hence the menu, which features smoothies, teas, juices and barista-made Karmee coffee alongside handmade cakes and a wide selection of gourmet sandwiches. Even if you're strictly a dog person, it's hard to go past roast pork and sesame mayo on brioche.