The good news: the theatrical 15-course meal is one of the best in the country. The bad: it's only around for a limited time.

The thirteenth course at Kuro's Kitchen is cheese. A French double-cream, it doesn't come with crackers and quince paste, but a gleaming layer of gold mead gel — brewed in house using one of Australia's best honeys, Malfroy's Gold, no less — and three peppers: Taiwanese maqaw, Tasmanian pepperberry and sansho.

This commitment to sourcing, and respecting, the best produce the world has to offer is consistent throughout the 14 other courses, too. There's a chocolate glaze made using Amazonian cacao tracked down by a Peruvian cacao hunter; hay-smoked Merimbula duck, which is finished at your table on a glowing coal; and nine-score David Blackmore wagyu that's aged in hojicha tea, wrapped in Hokkaido kombu and covered in a charcoal salt crust and slow roasted till just rare.

The good news is Kuro's Kitchen may just be one of the best meals currently on offer in Australia. The bad: it's only around for a limited time. Located at the back of Kuro, an a la carte Japanese restaurant on Kent Street, the space was meant to be home to an omakase fine-diner called Teramoto by Kuro. But then, the pandemic hit, and sourcing some ingredients became increasingly difficult — so, the team changed tact, and is biding its time with Kuro's Kitchen: an experimental 15-course, six-seat pop-up with a menu that changes every night.

Both restaurants are run by Executive Chef and Co-Owner Taka Teramoto and Sommelier Wanaka Teramoto (both from Waqu in Crows Nest), as well as Co-Owner Alan Wong. Together with Potts Point's Henderson & Co, the trio oversaw the design of the space, too, which sees the heritage sandstone building brought to life with modern touches. Monochromatic tables and chairs, polished concrete and copper tiles feature throughout, but the most eye-catching element is the lighting. Fifty-six American oak light 'portals' spread across the walls are inspired by the Arashiyama bamboo forest in Kyoto. Wanaka says when the sun sets through the forest, it feels like it's glowing. At nighttime, Kuro glows, too.

In the open kitchen at the back, you'll find Head Chef Nobu Maruyama (Bar H), who oversees the a la carte menu, while Taka focuses on the pop-up with Sous Chef Jack New (Icebergs). The food fuses old and new, like the space, with Japanese dishes and ingredients given a modern spin. Hand-cut ramen noodles are served in duck consommé with Tasmanian truffle, diced bluefin tuna is topped with sherbet-y davidson plum powder and Diamond Shell clams come with a zingy aged chardonnay vinegar. 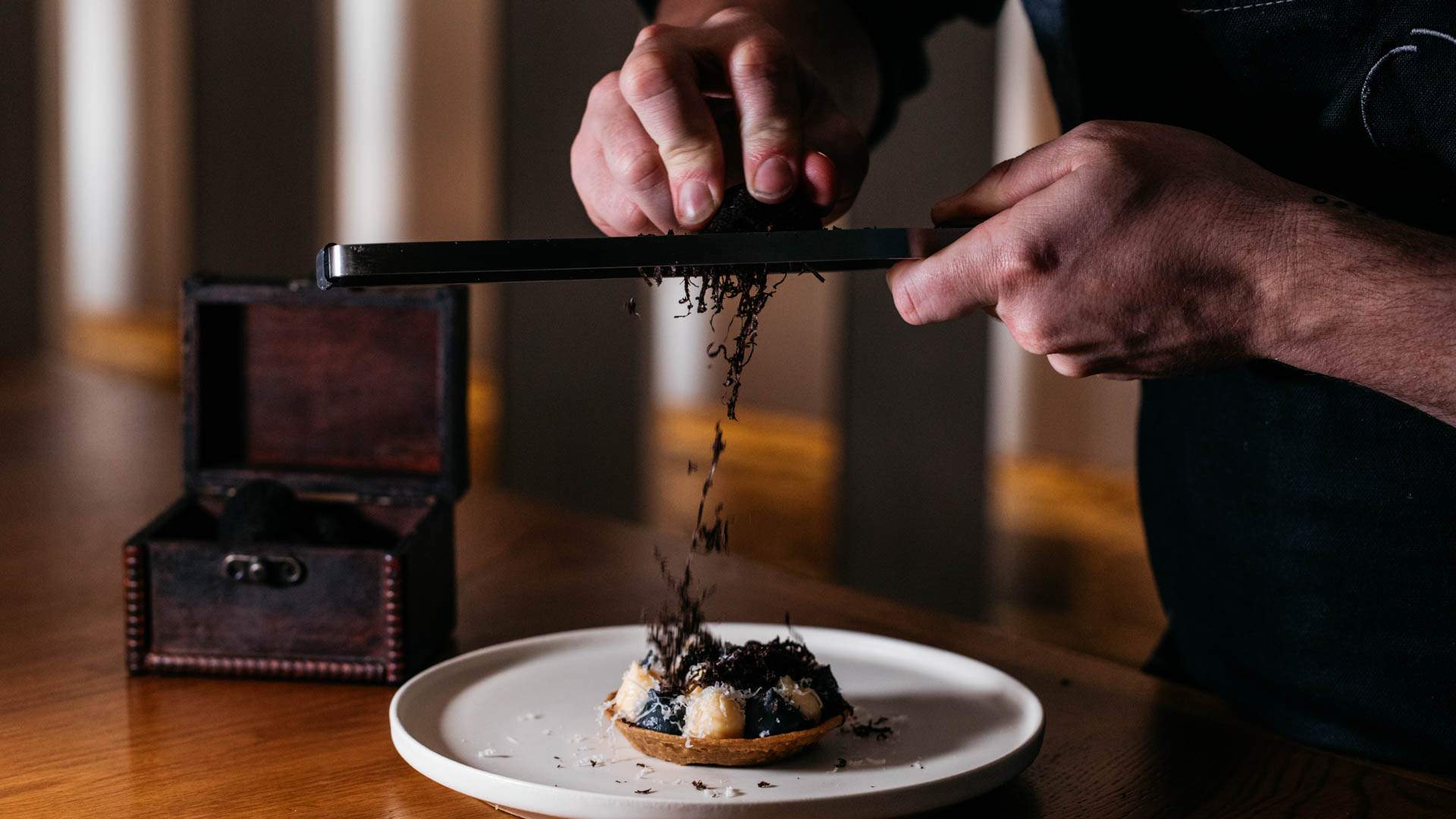 While Wanaka's wine list is predominantly Australian with a focus on boutique wineries with minimal-intervention philosophies, the cocktails, shaken up by bartender Fumiaki Michishita, take inspiration from Japan. There's the Sober Experience (soba-infused Jameson and absinthe with kabosu and umami syrup), the Lava Flow of Mt Fuji (brown sugar shochu, coconut and matcha) and, if you dine at Kuro's Kitchen, The Royal Alexander cocktail made with Hennessy XO, chestnut syrup and Tasmanian truffle salt — and topped with the grated Amazonian cacao.

Dining at the chef's table inside Kuro is an experience that's only set to get better — and more expensive — with the launch of Teramoto (hopefully, by the end of the year). For $160 a head for 15 courses, Kuro's Kitchen comes in at a relative bargain compared to many degustations across the country — but, for now, it's only meant to stay until the end of October. You can snag your seat right here.

Kuro's Kitchen is running nightly from Tuesday–Friday at 6.30pm (for a 7pm start).