Colonel Sanders, eat your heart out.

Doused in gravy or hot sauce. Sustainably-sourced or gluten-free. Taiwanese, Korean, or American. Fried chicken is the epitome of soul food in any language, and Sydney's restaurant scene brings you this heavenly bird done every way imaginable.

These Sydney joints combine nationalities, styles, and environmental consciousness to champion the fried side of chicken. Best paired with a crisp pale ale, golden ale or pilsener, fried chicken's one of life's little warm, crunchy constants — especially in the cold, cold heart of winter. Opened barely six months, this joint is already making waves — but those waves are less about the sea than you'd expect. The owners joke that 'Johnny Chicken' is a more accurate name, but their free-range fried chicken is no joke. Boneless and skinless, the chicken breast is marinated overnight and heavily spiced for a juicy, peppery finished product. Served two ways, on an incredibly buttery roll or classic plate ($10.80 each), the homemade hot sauce makes these standout dishes. The fresh lemon slice and vinegar slaw add acidity and lighten the heavy dish, while the bright colours pop well against the red and yellow interior of the restaurant. With their focus on sustainable and locally-sourced meat and produce, this is guilt-free eating at its best. Mary's, the Newtown institution and new favourite to the CBD lunch crowd, is a true beer and burger joint. But they're no less infamous for their headbanging fried chicken — marinaded in buttermilk, hot sauce and maple syrup, this succulent dish has a real American kick, served with extra hot sauce in their Jack Daniel's bottles. While the wise go for the half or whole bird ($16 and $28), you'll be tempted to go for the Larry Bird ($50), two whole chickens. And since the love affair between fried chicken and beer is timeless, this dimly-lit bar is the perfect rendezvous point for the two. It's quite the boast to call your dish 'Really fucking great fried chicken' ($18.50), but at Reuben Hills they're not just talking smack. Brined and soaked in buttermilk overnight, the gluten-free recipe hasn't changed much since opening. The boneless, massive chicken thighs have a thin crust and a very simple breading, while the large sides of homemade sauces give it that Central American flare — a cooling chipotle aioli and spicy salsa roja that hints of Moroccan flavours. The pickled green chillies give the dish another kick, balancing the fried component with a vinegary tang. With a menu inspired by the team's coffee-buying trips to Central and South America, best to enjoy this fried goodness with their cold drip coffee ($5). If you're looking for that truly American-style fried chicken in Sydney, Hartsyard is second to none. Their deep south fried bird ($28) is served with buttermilk biscuits and sausage gravy; a true nod to the southern comfort food that gives real legitimacy to the menu. This dish doesn't try to lighten the eating experience, but rather embraces the heaviness that is southern cooking. And if the battered chicken and thick, creamy gravy isn't enough, you can finish your trip down Gluttony Road with the fluffy biscuits, all topped with optional homemade hot sauce. Moon Park takes fried chicken to fine dining level. Their organic, free range dish ($14) is no secret recipe. Thickly coated in buttermilk and shrimp paste and twice-fried, the batter has a distinct taste and an extra crunch. Frying at two temperatures maintains the chicken's moisture, with the white meat nearly as juicy as the dark. As far as topping goes, there's no spice here — the soy and maple syrup sauce gives the entire dish a sweet and salty profile, and the perfect cubes of pickled radish add a fresh crunch of their own. This dish is signature on the menu, a staple since opening and a clear favourite of patrons. The bad news is that Moon Park is set to close permanently in September — so much sure you pop by for a bit of bird while you still can. The buttermilk-battered and 'secretly spiced' fried chicken ($24) at Fat Rupert's has become a thing of legend. The unbeatable creaminess of Pepe Saya, coupled with the honey butter topping, adds to the richness, while the fennel puree and cabbage slaw sides give a fresh aspect to the dish. This balance is nicely mimicked throughout the menu, which is American-influenced but focuses on modern Australian cooking. And if the chicken itself isn't enough for you, head to Bondi over the weekend when the chicken and waffles will be back on the menu ($25). A favourite from their Rupert & Ruby pop-up, this is an indulgence you won't regret. 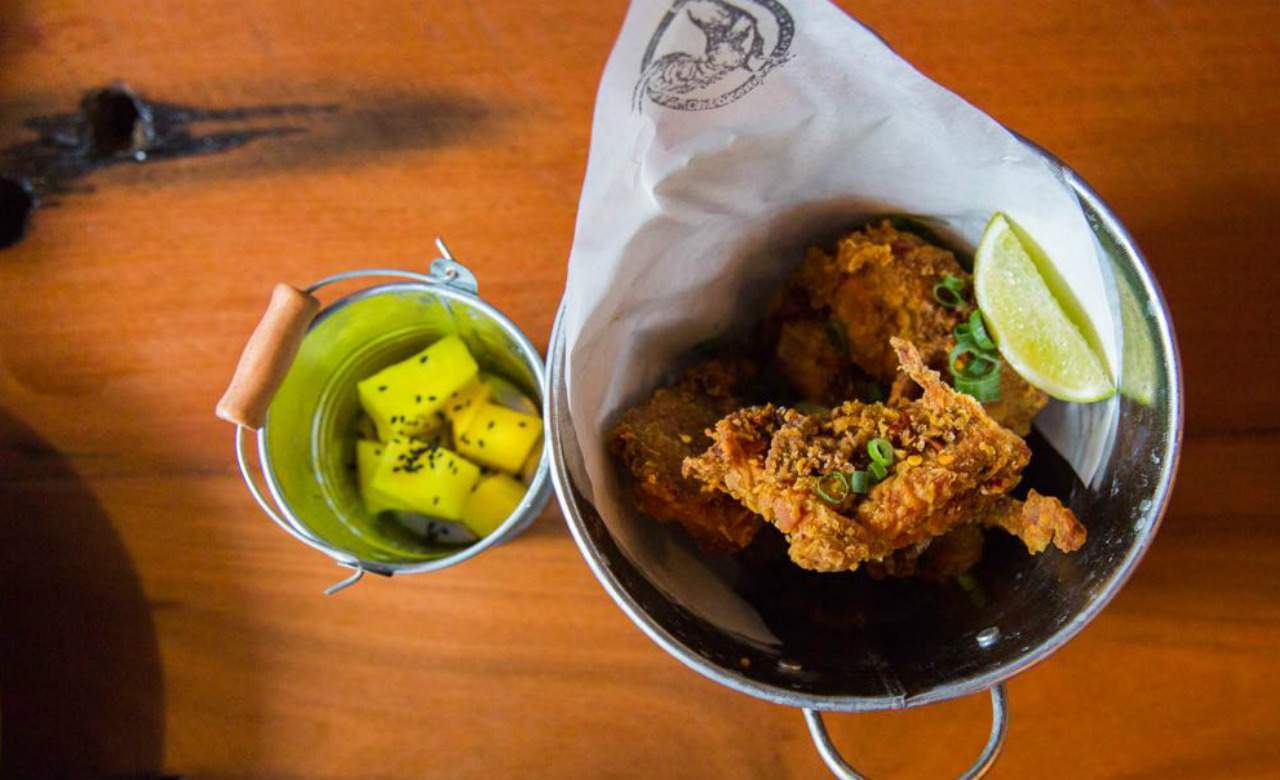 This Surry Hills restaurant seems to be constantly bustling with jovial groups chatting away while plate after plate of modern Korean barbecue is ushered out.   Their friendly banter is not hard to understand once you've tasted the namesake dishes. The four distinct chook options are all "damn good", but a true crowd pleaser is the fried garlic chicken ($24); sweetly glazed in caramel, the juicy yet crispy chicken is perfectly balanced by the sour pickled radish side. The spot is still BYO (wine only), and the sweetness of the glazed chicken actually goes quite well with a dry white. 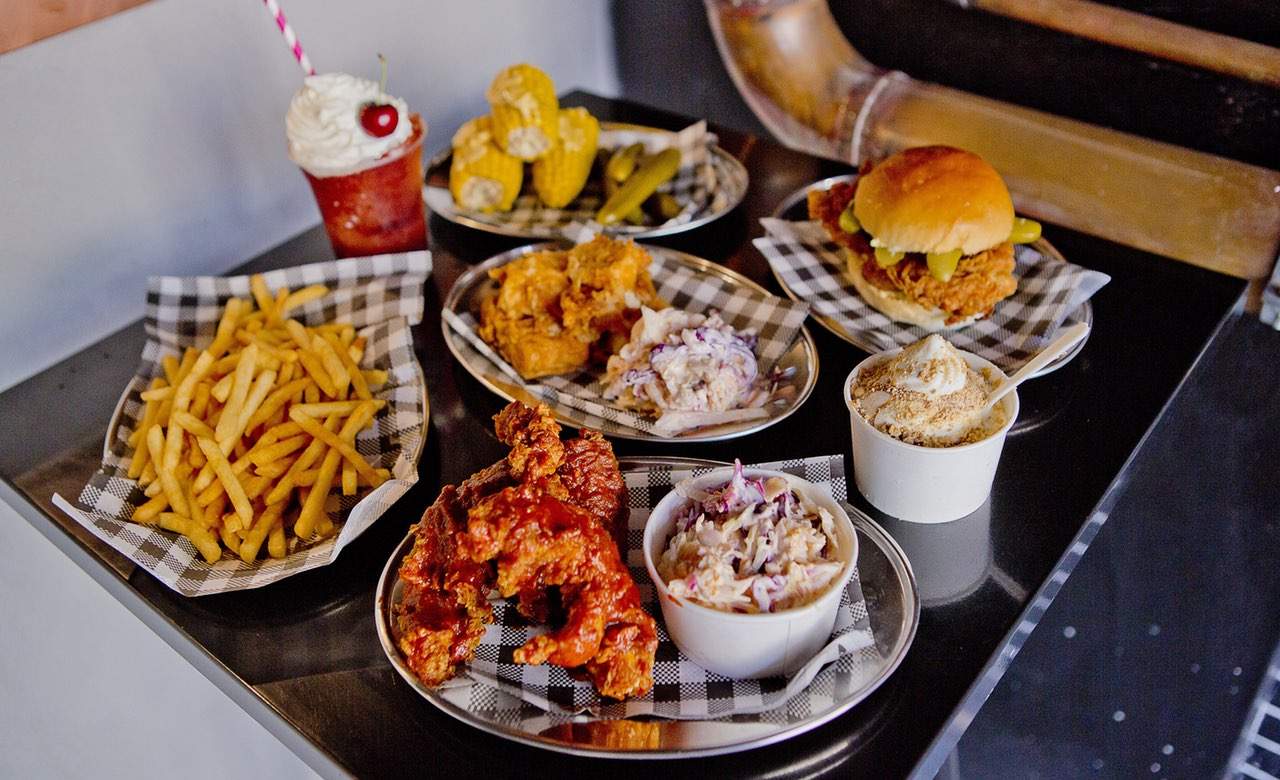 Hungry? Or need a new pair of sneakers? Solve one or both of these dilemmas at Butter, Sydney's utterly ridiculous and totally amazing palace of fried chicken, Champagne and sneakers. The dish to order is the Size 13's, a generous party pack of fried chicken thighs, chicken tenders, pickles, slaw and sauces — all served in a size 13 shoebox.  The first thing you'll notice is the lack of bones, just buttery soft chicken flesh all the way through. This is achieved by brining the chicken in buttermilk then dipping it in a cayenne and cumin-spiced batter to seal in all those precious juices. Oh, and did we mention their boozy slushies topped with soft serve? Like Mr. Crackle, from which it spun off, Thirsty Bird in Potts Point is a mono-meat venue – not pork, but rather a whole lot of chicken. Trust us though, you won't want anything else. The menu here has a classic American diner vibe, with buffalo wings, chicken piece meals and four chicken burgers to choose from, with waffle fries, chicken crackling and mac and cheese on the side. The brainchild of renowned Australian chef and former Nashville resident Morgan McGlone, Belle's has been combining spicy, spicy fried chicken with cool, cool natural wine and a bunch of hip hop since opening in Melbourne a few years back. They've toyed with us in Sydney a number of times, most recently in the form of a pop-up at The Streets of Barangaroo that's set to be made a permanent restaurant by the end of the year. Looks like pretty soon you'll be feasting on "really fucking hot chicken" whenever you damn well please.

Wulugul Walk, The Streets of Barangaroo You aren't looking for atmosphere here, but the small and gaudy takeaway shop doesn't need to do much to live up to its name. Cranking out some delicious fried chicken at ridiculously cheap prices, it is easy to see why Sydneysiders are happy to welcome the Taiwanese chain store. Pounded out to super thin and as big as your face, the two flavours (original and spicy, $7.90 each) are simple, distinct, and impressively juicy.