The authors of 'Places We Swim Sydney' pick five peaceful swimming spots that every NSW water-lover should visit.

It's no secret we love a swimming hole. From Bondi Beach's glistening Icebergs to out-of-town ocean pools and hot bore baths in outback NSW, we spend our spare summer days driving in search of a swimmable body of water, and the other seasons eagerly awaiting the ripeness of summer. And the best part is that this fine state of ours is full of swimming spots unique to our sunburnt landscape, both on rugged coast and hidden in-land among bush and desert rocks.

Caroline Clements and Dillion Seitchick-Reardon visited a whole heap of them as 'research' for their new book, Places We Swim Sydney. While the book collates handy information about 40 pools, beaches, waterfalls and dams within two hours of Sydney's CBD, here, they detail five of the stunning spots that you should most definitely plan to visit before summer ends. This tiny cove is part of the Manly to Spit walk, so if you're coming in via the coastal trail, you will find some respite along the ten-kilometre track at the jungly section between Clontarf and Grotto Point. But if you're not walking, there is some limited parking located on Cutler Road and in the Ogilvy Road cul de sac. Look out for the signposted MSW (Manly Scenic Walk).

Steep, worn stairs descend from Ogilvy Road to this small beach. The namesake is a large, freestanding boulder that has been a little ambitiously titled. It's unusual to find detached rocks like this in the Harbour, so despite its lack of turrets or drawbridges, it does carry some significance and is a useful marker for anyone approaching via boat. If you're capable, it is also fun to scramble up here and sit on top of the rock to take in a sunset.

Beachgoers tend to gather at the base of the stairs, which is good enough on a quiet day, however hundreds of metres of reef and beach extend in both directions, giving Castle Rock plenty of space for visitors, without impacting privacy or ever feeling too crowded – an essential quality in any revered harbour beach.

Swimmers float up and back past oyster-covered rocks in deep, clear water, careful of where they put their feet down. Back on shore, groups of teenagers collect in gaggles on sandy towels, constantly adjusting their bathers to avoid dreaded tan-lines.

On a hot day, with a strong northerly wind, it is a popular place for boats to seek shelter. Prepare yourself for an amplified mixed tape of 80s, 90s and noughties dance hits. But that is just about anywhere in the Harbour over the summer. Speed boats pull right up to the sand, collecting friends like it's an Uber Pool ride, or arrive delivering ice creams on a circuit to some of the north shore's remote bays. Most of the time, however, it's calm enough to forget that you are in a city at all. Clovelly, as a suburb, has perfected the sand-less swim. It's a quality that is gleefully celebrated by at least one half of this author team. No buried children, or castles, or lightly crumbed human schnitzels will be seen here. No awkwardly sliding a grainy foot into a pair of jeans and sending shivers up your spine. No bringing the beach back to your car, your shower, and your bed. If those things excite you, then it is best to look elsewhere. The only thing you will take away from Gordons Bay is a good time and new dog friends. In the winter you can get it all to yourself, while the summer brings a festive, communal atmosphere.

Gordos is a high-walled bay fringed by hulking boulders and rock-shelves. People lay about on rock slabs around the perimeter, as if claiming a private island. To be honest, there is also a small sandy beach, but that isn't why you come here. The deep water (about 15 metres in the centre) is protected by an offshore reef, providing a safe place to swim in almost all conditions. The clear, calm ocean is incredibly inviting, which makes it a popular destination for standup paddle boarding, snorkelling and diving. In fact, just below the surface is an underwater nature trail that was constructed by the Gordons Bay Scuba and Dive Club.

Above water, it's always a fun scene. Walkers are constantly dropping in from the track above and if you stay long enough you will inevitably run into someone you know. Or better yet, someone you'd like to know. Sharing a sandstone slab with new people is a fast way to make friends, especially if one of them is a poodle. Dogs chase balls into the ocean or stumble around the boulders in hot pursuit. Although it is not an official dog beach, the council tends to look the other way so long as everyone remains on their best behaviour. The same can probably be said for humans. This historic 30-metre-long pool is hidden on the western side of Cremorne Point. Some may say it's one of Sydney's best-kept secrets. You didn't hear it from us.

Tucked into the leafy hillside (along the Cremorne Foreshore Walk), this harbour pool has prime views back towards the city skyline, the Sydney Opera House and Harbour Bridge. This was once a members only facility for locals and still retains a certain air of exclusivity. In the 1920s, it was named the Cremorne Bathing Pool, and entry required wearing a patch on your swimsuit bearing the red initial 'CBP'. Back then, swimming here cost five shillings a year. Entry is free these days and no gang affiliation is required.

Maccallum Pool is up there with some of the most iconic places to watch the fireworks on New Year's Eve, and may be the closest most of us will get to owning a boat on the Harbour. To be clear, it is not where you go to swim a kilometre. It's too short and notoriously cold, due to its sheltered position. However, the perimeter timber decking catches the afternoon rays and is what makes this such a special place. Visitors drop in from the footpath above, walking the timber deck as they marvel at the views just beyond the picket fence.

This is where people go to enjoy their own company. It's meditative and thoughtful. The afternoon sun feels healing and gentle. On any given day, you will likely find someone drinking a beer and reading a book, making a long phone call to an overseas family member, or stretched out on a yoga mat. As we break bread and cheese with our friend, we are grateful for this stolen moment and to live in a city where such things are possible. 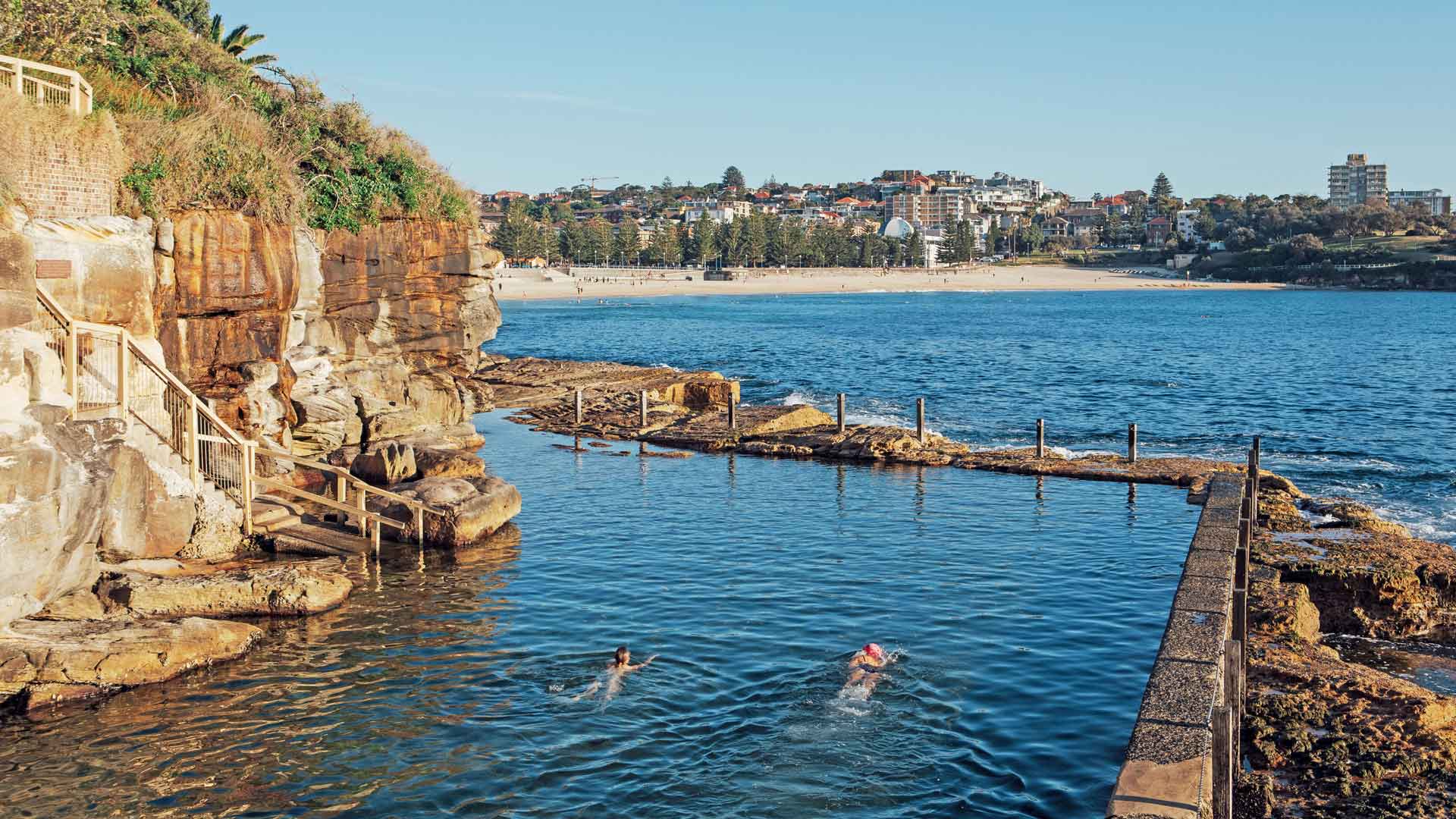 There is some kind of unspoken sisterhood established between swimmers at the sanctuary that is McIvers Ladies Bath – the last women's only swimming pool in Australia. It might be a nod, eye contact in the water or a gentle smile as you arrive. Tucked into the cliffs between Coogee Beach and Wylie's Baths, this is a meditative space to escape and relax. Throw a $2 coin into the donation basket and follow the cream-coloured balustrade as it winds down the hill, leading you to the sunlit pool overlooking Coogee Bay. Since 1876, ladies have swum laps and read books in the sun here, with the company of others, giving women of all swimming abilities and cultural backgrounds a safe way to experience the ocean. At the base of a steep coastal valley studded with cabbage palms, Bilgola is usually a quiet place and one of the northern beaches' most concealed 50-metre swims. We're sure if you didn't know it was here, you'd easily drive right past this coastal enclave. In fact, it's hard to see Bilgola from almost anywhere else. The land rises steeply behind the beach to Bilgola Plateau (169 metres high) and then descends to Clareville on the western side of the peninsula. Houses pepper the valley walls, with 3000+ residents united by a love of the precipitous waterfront location. From the pool, you can look down the length of the 500-metre beach, where waves roll and crumble over sandbars, making it a mellow place for beginner surfers, and those escaping the crowds at popular neighbouring breaks. Weekdays are leisurely here, with regular lappers before work and seniors who meet every Wednesday, year-round, followed by a coffee at the kiosk on the south end of the beach.

If you grew up swimming in Australia you'll remember a few of these things: the ringing of a whistle to approach the starting block, a belly full of nerves before you dive in and the sound of muffled chants through waterlogged ears. These are memories we associate with school sports, and it is this nostalgic feeling that comes flooding back when we arrive at Bilgola Rockpool. On Saturday mornings from October to March, this secluded spot turns into a full-blown carnival. Cardinal red and myrtle green flags are hung at either end of the pool (we've heard it is a nod to the Rabbitohs). Lane ropes, that aren't usually there, are strung up across the pool. The smell of sausages, eggs and bacon cooking on a barbecue waft over from a marquee, selling iced cupcakes and lollies. Kids are either covered in sand, draped in towel ponchos or are collecting seaweed to throw at each other. Meanwhile, surf club members round-up swimmers aged three to 80 to race, so long as they can swim a lap.

On most days at Bilgola, there's no time-keeping, no megaphone and no fanfare, and we love it for its slow pace and peaceful outlook.

This is an edited extract from Places We Swim Sydney by Caroline Clements and Dillon Seitchick-Reardon, published by Hardie Grant Travel RRP $39.99 and is available online and in stores nationally.

Published on October 09, 2020 by Concrete Playground