Daryl Braithwaite-style horse riding on the beach, sandboarding at breakneck speed down enormous dunes and boating alongside breaching whales — you can pack this all into one weekend. Port Stephens is only a 2.5-hour drive north of Sydney, yet feels like some exotic, faraway, nature adventurer's dreamscape.

The bay, its entrance marked by spectacular Tomaree Head, is twice the size of Sydney Harbour. There are 26 beaches, plus numerous waterfront villages, where restaurant menus boast just-caught fish, local oysters and Hunter Valley wines. Here's your guide to an easy weekend away from Sydney.

Please stay up to date with the latest NSW Government health advice regarding COVID-19. The quintessential Port Stephens feed is a long lunch at Little Beach Boathouse, overlooking Little Beach, Nelson Bay. Watch local pelicans glide and soar as you tuck into oysters with wild pepperberry vinaigrette and squid ink spaghetti loaded with seafood. Another option is Sandpipers Restaurant, which you'll find in town. Here, the kitchen whips up all kinds of seafood wonders, like prawn hot pot with turkish bread, seafood chowder and crab and parmesan arancini.

For the ultimate sunset drink setting, make tracks to The Point Restaurant, Soldiers Point. You'll be tempted to stay on for dinner, which — yep, you guessed it — involves a lot more fresh local seafood, including crisp flounder with white noodles and slow-braised octopus with pickled vegetables and bean puree. Not a big fan of seafood? Head to Shoal Bay Country Club, which is lauded for its Neapolitan-style woodfired pizzas. Come breakfast, hit Little Nel Cafe. This local favourite has a cosy indoor space and a sunny outdoor terrace. Start with a coffee — it has nitro cold brew on tap — while you peruse the extensive brekkie menu that's packed with dishes made with local ingredients. Try the Medowie garlic mushies, with whipped fetta, Morpeth red kale and chimichurri, or the Wagon Wheel Waffles, loaded with vanilla bean ice cream, strawberry gel and house-made marshmallow. Meanwhile, for a dash of history and an old-school Devonshire tea with panoramic views, swing by the Inner Light Tea Rooms.

On nearly every drinks list you meet on your weekend away, you'll notice craft beers by Murray's. Opened in 2006, this quirky brewery has won much love in Port Stephens and further afield. Staples like Whale Ale and Middle Man Golden Ale have well and truly displaced mainstream beers, and, nearly every week, a new, left-of-field drop emerges. Past hits have included passionfruit wheat beer, Easter egg beer and pumpkin ale. Drop into Murray's HQ for tastings, lunch and a brewery tour held daily at 2.15pm (though currently on hiatus due to COVID-19 restrictions). Every local you meet will ask if you've topped Tomaree Head Summit yet. The 45-minute walk is steep, but rewards you with epic views, taking in local islands and seemingly endless coastline. Next up, it's time to brave the water. Port Stephens is undeniably one of the best places to spot whales on Australia's east coast between May and November. So, if you're visiting during the peak period, jump aboard a cruise with eco-warriors Imagine. Its fast cat Envision holds just 22 people, so it feels more like a private adventure than a touristy experience. In between chasing breaching humpbacks, sneaking up on a fur seal colony and finding dolphins, the skipper will take you close to Cabbage Tree Island, one of the only nesting sites in the world for the threatened species of seabird, Gould's petrel. Go at sunset if you can — the views on the return journey are magical. You can also whale watch from the shore in Port Stephens — check Wild About Whales for the best vantage points. 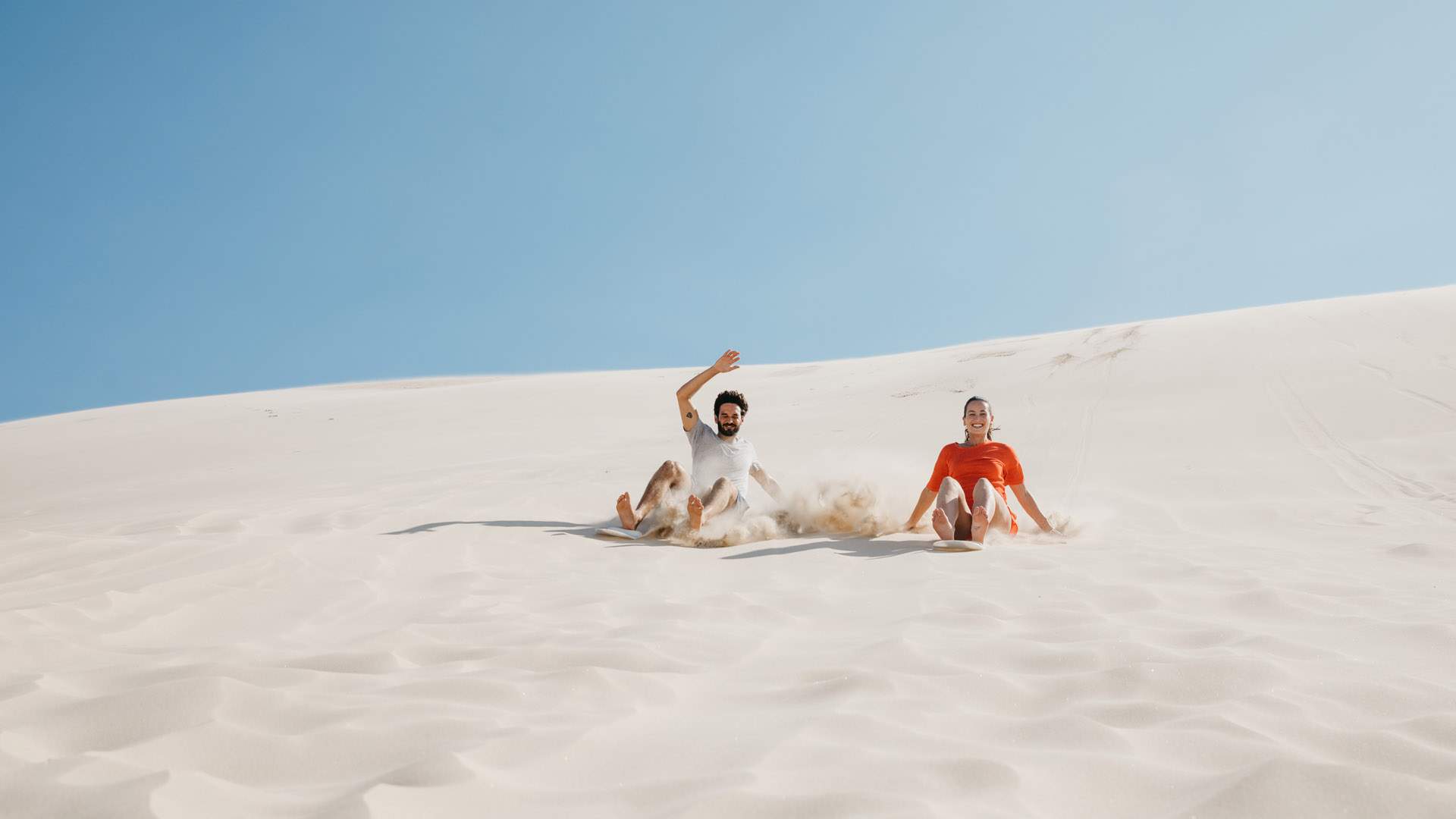 On the surf side of Port Stephens' southern peninsula at Birubi Beach, Anna Bay, some hair-raising escapades are to be had. Been hankering for a horse ride ever since you read Black Beauty? Book a beach adventure with Sahara Trails. If you're a beginner (or full of nerves — or both), your guide will stick to a casual stroll. Alternatively, try some trotting or even a canter through the surf.

Behind the beach is Stockton Sand Dunes — the biggest dunes in the entire Southern Hemisphere. Meet the crew from Sand Dune Safaris in the car park, strap yourself into a 4WD and, as soon as the surf is out of sight, you'll feel as though you're exploring some remote desert. Sandboarding involves sitting or standing on a plastic board and sliding down super steep slopes — it's guaranteed to be the most fun you've had since you threw yourself down a grassy hillside as a kid. Extend your safari with a 25-minute drive over the sand to Tin City, which you might recognise from Mad Max (1979). This 11-shack village, which started in the early 20th century and expanded during the Great Depression, is off-the-grid. We're talking no power, no water and no sewage. Anchorage Port Stephens is as waterfront as it gets. Many suites come with their own north-facing balcony or terrace, giving you dreamy views of the bay, foregrounded by the Anchorage Marina and backdropped by Corrie Island. The spacious interiors take inspiration from The Hamptons — think crisp, white linen and pale timber furnishings, splashed with blues and oranges. There's a variety of rooms on offer, from one- and two-bedroom loft suites to self-contained villas. This luxe resort also boasts a pool, day spa and two onsite restaurants, making it a true escape from your day-to-day.

If you'd rather opt for a home-away-from-home approach, book Bay Haus, overlooking Nelson Bay. Expertly styled to achieve that coastal chic feel, this three-bedroom pad sleeps up to five people and is just one street back from the beach. It's also just a short walk from the hustle and bustle of the town centre.