Along the 1200 kilometres of coastal glory that stretches between Perth and Exmouth, you can dive with whale sharks, meet some of the friendliest dolphins you'll find anywhere, visit the oldest living fossils in the world, get to know sea lions, lose yourself snorkelling in beachside coral gardens and drink as many cocktails at sunset as you can handle. With all the spectacular views, but much less of the population of Australia's east coast, the Coral Coast provides one wild, beautiful road trip. Here's our guide to making the most of seven days behind the wheel. DAY ONE: PERTH TO GERALDTON, 420KM

From Perth, follow Indian Ocean Drive north. Two hours brings you to the white-sanded fishing village of Cervantes. From here, you can stroll among meadows crowded with wildflowers, nip out to local islands to laze about with sea lions and marvel at The Pinnacles — 30,000-year-old limestone formations within the desertscapes of the Nambung National Park. For the next 200 kilometres, the road hugs the coast, slipping through a collective of laidback beachside towns. Once you hit Geraldton, you'll be ready for a windsurfing lesson among ideal conditions and an over-water sunset, accompanied by a good dose of western rock lobster. It's arguably the freshest, tastiest seafood in Australia. By the time you reach your next destination, Carnarvon, you're in tropical WA. On the fertile plains of the Gascoyne River, more than 170 plantations produce over 4000 tonnes of bananas and 1300 tonnes of mangos annually, plus tomatoes, grapes, capsicum and more. That's why Carnarvon is known locally as the 'salad bowl of Western Australia'. Wander through lush farms before heading to a local restaurant to indulge in the seafood of your choice: prawns, scallops, crabs and fish are delivered to your plate direct from the sea. Your evening should also include a sunset stroll along the fascine. If you're there on a Saturday morning between May and October, visit the Growers Market, where farmers and producers pour in from all over the region to peddle their wares. Make your first stop the Quobba Blowholes, just 75 kilometres north. Slamming against the coast with a mighty force, the swell is pushed through narrow rock openings and sea caves, creating spectacular water jets that spout as high as 20 metres. To decompress afterwards, pop just one kilometre south, where you'll discover a calm coral lagoon, known as The Aquarium, for swimming. Once you reach Exmouth, you're on the edge of the Ningaloo Reef. Kick back on idyllic beaches, jump aboard a glass bottom boat tour, join a snorkelling expedition or, if you're there between March and July, go diving with whale sharks. This would be a good point to treat yourself to a night of comfort at the Mantarays Ningaloo Beach Resort or go all out with a night at Sal Salis Ningaloo Reef Safari Camp. Your return journey south starts with a short day on the road. There's so much to do along this section, it's best to keep driving time to a minimum. What makes the tiny town of Coral Bay so special is that an extraordinarily beautiful section of the Ningaloo Reef is accessible just a few metres offshore. Make tracks to Five Fingers Reef, then simply pop on your snorkelling gear and dive in. To step the action up a notch, take a 20-minute walk from Main Beach to the shallow waters of the local reef shark nursery, where hundreds of sharks gather between October and March. Follow the Northwest Coastal Highway as far as the turn-off to the Shark Bay World Heritage Drive. Your first adventure along here — the stromatolites of Hamelin Pool — transports you 3.5 billion years back in time. You're looking at the oldest type of living fossils to be found anywhere on the planet. Also definitely worth a stop are the 70-kilometre-long Shell Beach and the dazzling views from Eagle Bluff. Come evening, Monkey Mia has a friendly school of bottlenose dolphins waiting to make your acquaintance, and there are ample opportunities for waterfront cocktails. 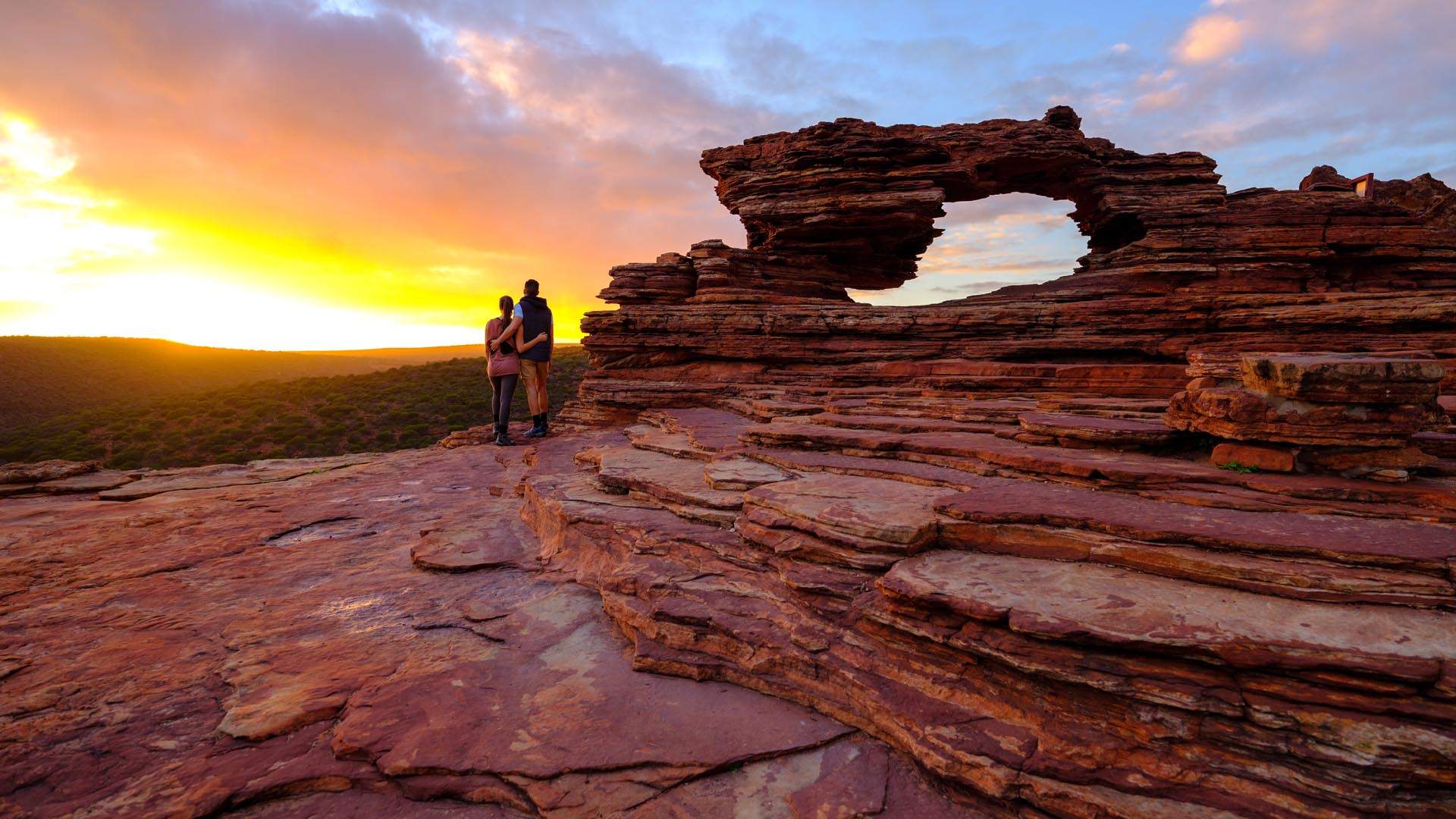 At Kalbarri, the Murchison River runs into the Indian Ocean. Hop aboard a river cruise and go kayaking or canyoning among the steep gorges of the National Park. Hikers will enjoy the eight-kilometre Loop Track, which begins and ends at Nature's Window. Short on time? Visit the two new skywalks, which project 17 metres and 25 metres over the rim and 100 metres above the gorge. Alternatively, stay coastal with your own beach house at Kalbarri Seafront Villas and enjoy stunning walking trails, the legendary Jacques Point surf break and, between June and November, humpback whale spotting. Finish up your day at an outdoor cinema and start the next one with pelican feeding. Your seventh and final day brings you an inland experience in the form of the National Trust town of Northampton. Reach it via the coast, taking in the magnificent ocean views south of Kalbarri, or cut straight east through the Kalbarri National Park, keeping a lookout for thorny devils as you go. At Northampton, you can check out a bunch of renowned Western Australian attractions, including the state's oldest public railway and Oakabella Homestead and Tea Rooms. Afterwards, return to the coast and take your pick of sleepy villages for exploration, including the twin towns of Dongara and Port Denison, and the tranquil harbour of Jurien Bay.