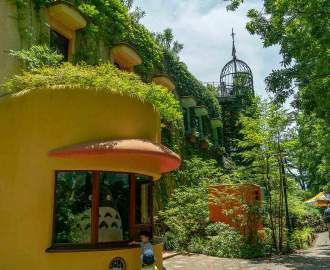 Making a powerhouse acting debut, Zain Al Rafeea carries the entire weight of Capharnaüm on his slender shoulders. Playing a young Lebanese boy also named Zain, the untrained talent puts in a raw, soulful performance that nearly bursts off of the screen, all while capturing a truth that is rarely uttered. With a weary expression where an impish smile should be, he conveys the toll of simply existing, a burden that nobody initially asks for. Indeed, when Zain is introduced in court, suing his parents for bringing him into a life of relentless hardship, Al Rafeea's exasperated face alone sells the character's existential angst.

While Zain's unconventional lawsuit provides Capharnaüm's entry point, writer-director Nadine Labaki (Where Do We Go Now?) is quick to explore the basis for the 12-year-old's legal challenge. In his dismal Beirut home environment, his parents (Kawthar Al Haddad and Fadi Kamel Youssef) make him work to support the family, his baby sibling is kept in chains, and he witnesses his beloved younger sister (Cedra Izam) sold into marriage for a few chickens. More than that, his birth was never registered, so he can't get the necessary identifying paperwork to attend school or to even prove that he exists. Running away, he's soon caught in another difficult domestic situation — taken in by kindly Ethiopian immigrant Rahil (Yordanos Shiferaw), he cares for her infant son (Boluwatife Treasure Bankole) while she works, but is left stranded when she suddenly doesn't return.

Scripting the film with four co-writers, Labaki puts the despairing yet resourceful Zain through even further misery — the type that'd be badged 'poverty porn' if it wasn't drawn from reality and told with such empathy. Those traits prove Capharnaüm's main strengths, aside from the highly sensitive work by the movie's non-professional actors. Much of the cast, including the mesmerising Al Rafeea and captivating toddler Bankole, have lived lives that hew much too close to the events seen on screen, while Labaki's commitment to bringing their plights to light shines through in her narrative. Ranging beyond the feel-good charm of Slumdog Millionaire and the tender reunion of Lion, Capharnaüm actively wants viewers not just to engage with its bleak story, but with the truth behind it. From crumbling shanties to overcrowded juvenile jails, this is a fictional tale wrought from the toughest type of real-life pain, and it's designed to feel that way from start to finish.

The key word there is feel. Labaki wants audiences to be moved by her gritty, warts-and-all portrait — and given everything that Zain experiences, that's exactly what happens. Alas, although the actor-turned-filmmaker clearly recognises the potency of her material, she doesn't seem to trust it to get the job done alone. Every stylistic decision, from the lingering camerawork to the button-pushing score (by her husband and producer Khaled Mouzanar) to the lurching narrative structure, is calculated to poke and prod viewers. Every choice cajoles those watching not just to react with sympathy, but to respond harder and deeper, eventually to the point of overkill. There's a difference between stressing the point in an earnest and affecting way, wallowing gracefully to truly communicate the enormity of a character's struggle, and hitting people over the head. Bluntly bludgeon someone for long enough, and they might just stop feeling anything.

As a result, even with a Cannes jury prize and an Academy Award nomination to its name, Carpharnaüm can't overcome its obvious contradictions. It knows that it's spinning a worthy tale, but isn't confident that anyone will care about the gruelling minutiae without applying force. It possesses two of the most authentic, endearing child performances committed to celluloid in recent times — on par with its thematic sibling, The Florida Project — and yet packages their naturalistic work with overtly manipulative storytelling. It argues that unthinkingly birthing kids into a downtrodden life is a heinous crime, while also championing a boy whose engaging persona and enduring resilience was forged through weathering immense difficulties. Although it's impossible to ignore these clashes, when Al Rafeea lights up the screen, he'll make you wish otherwise. Stirring but never self-assured enough to be subtle, Capharnaüm is a heartbreaking movie that stops well short of being a heartbreaking masterpiece.