Looking for a hotel that'll make you feel good about hitting snooze? We've found it.

After a long couple of years without international travel, you're probably in desperate need of a break across the ditch. Happily, Kiwis no longer need to isolate or endure a stint in MIQ on returning home to Aotearoa, meaning spontaneous holidays are back on the menu.

Whether you're dreaming of a shopping expedition or you just want to sample all the delights Sydney's culinary scene has to offer, you're going to want to be right in the thick of things to make the most of your time in Australia's largest city.

To help you find your sleepover digs, we've uncovered our favourite places to snooze in the CBD. Whether you want a classic hotel on the edge of Hyde Park or boutique accommodation on the city fringe, we've found the plushest pillows and the comfiest beds for you and your mate (or date) to have an A-plus weekend escape. Every one of QT Sydney's guest suites has been carefully crafted to reflect and honour the historic Gowings and State Theatre buildings in which it resides. QT's exterior boasts a blend of gothic, art deco, and Italianate-influenced architecture — and inside, the luxurious rooms carry through that art deco-meets-gothic aesthetic to quite the striking degree.

Plus, its central CBD location makes it a breeze to get your culture fix during your stay. Nearby, you'll also find Sammy Junior, Glass Brasserie and The Grounds of the City. However, if you don't feel like leaving your hotel, you're in luck — the QT hosts the renowned Gowings Bar & Grill, too. When Paramount House Hotel was first announced back in August 2017, the hotel promised it wouldn't be your standard luxury hotel, but rather an experience that would embed patrons into the culture of Sydney's inner-city suburb of Surry Hills. All we can say is that, when it opened in 2018, it delivered on that guarantee.

You'll never have a dull moment at Paramount, as the building offers up a rooftop gym, independent cinema and one of Sydney's best cafes. Set in an old 40s warehouse, the 29-room hotel features soaring ceilings with exposed brickwork, and while there's also luxury copper finishes, Jardan sofas, premium kilim rugs from Pakistan and a one-of-a-kind vending machine, the appeal of the place is less tangible in its nature. It's both the vibe and history of the surrounding community that make Paramount House Hotel a special stay. 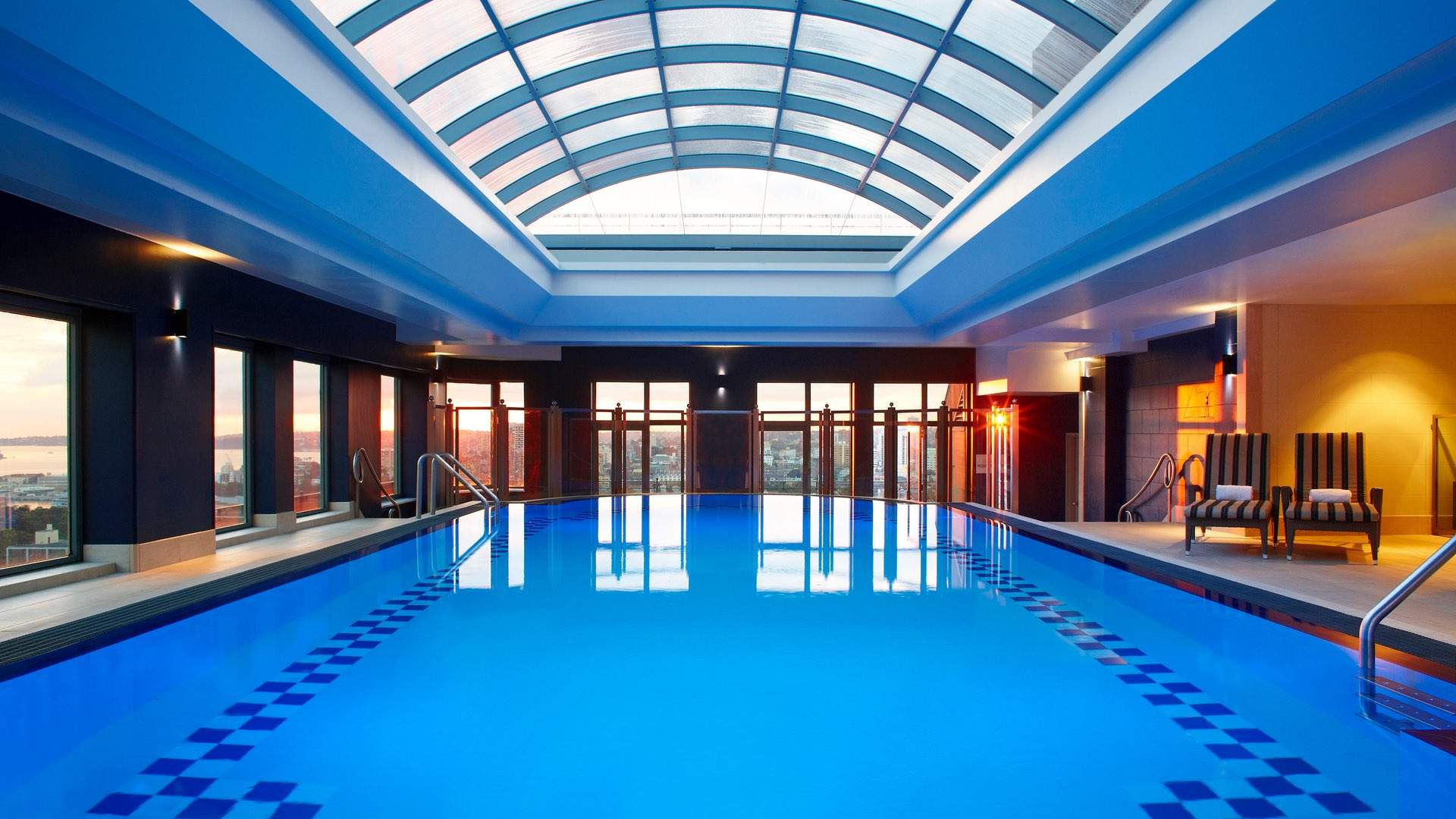 Back in 2018, Sheraton Grand Sydney Hyde Park underwent a mammoth $50 million refurbishment and catapulted this luxury hotel to five-star status.

Guests can book into the on-site health club for a massage, body or skincare treatment, escape to the rooftop pool or jacuzzi or enjoy one of the hotel's incredible dining options. Choose from a seafood buffet at the hotel's restaurant Feast, high tea at the Gallery, or light eats and a cocktail from the Conservatory Bar. Or, go all out and order yourself room service — you deserve it. 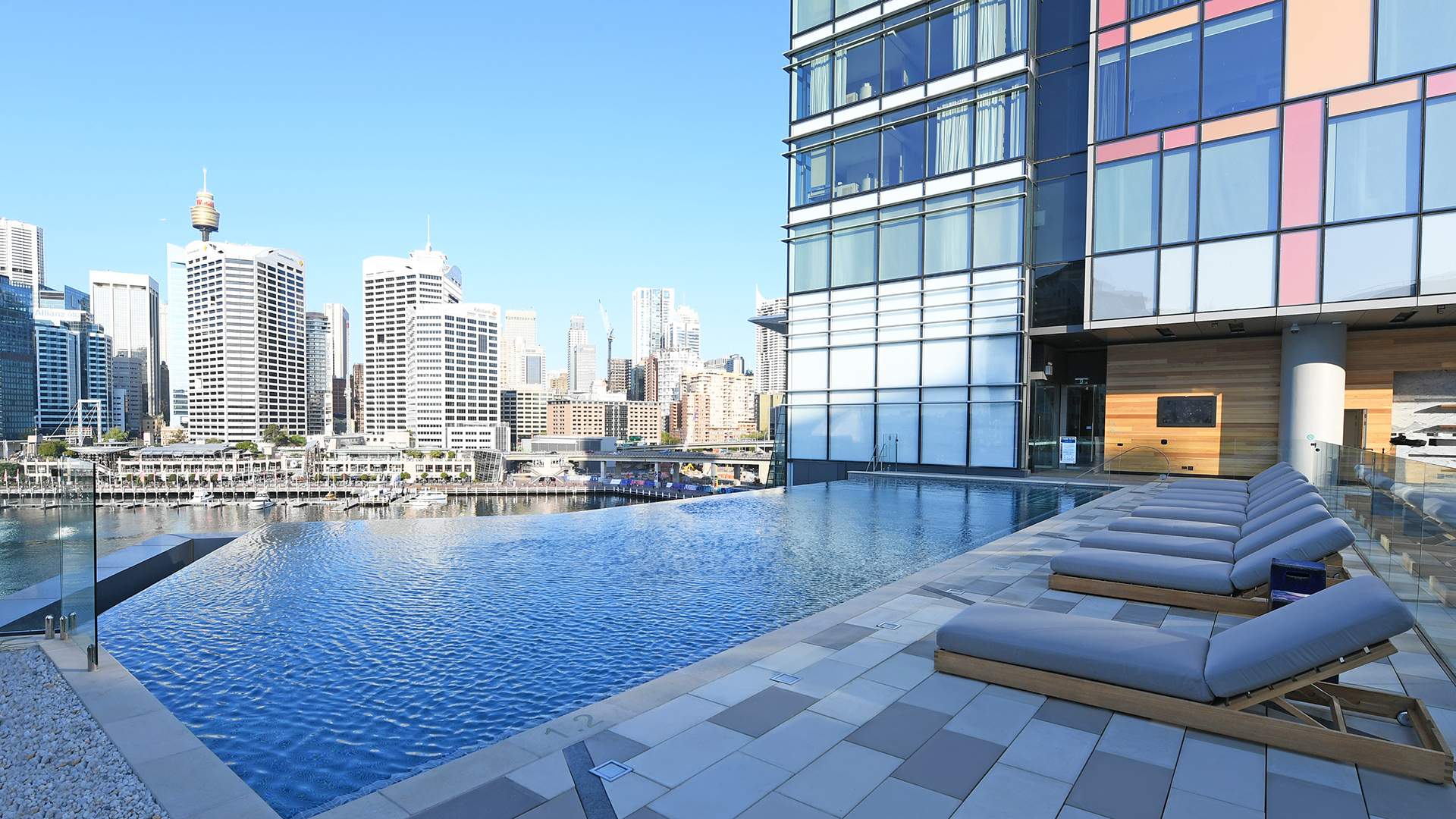 This lush 590-room hotel was designed by award-winning Sydney architect Richard Francis-Jones. Costing a cool $500 million, the 35-storey building features floor-to-ceiling views of the city and Darling Harbour, a French-inspired rotisserie and grill, a dedicated champagne bar and a decadent pool drinking and hangout space.

Those staying the night at Sofitel Sydney Darling Harbour means you'll have your pick between a standard room or one of the 35 suites, with the latter coming complete with in-bathroom TVs, soaking tubs, private check-in and your own sky-high guest lounge. Grab a beverage or meal from the hotel's signature restaurant and three bars or hang out by the 20-metre infinity pool — with a cocktail in hand, of course. With Sydney Harbour, The Rocks and Circular Quay right around the corner from this George Street stay, you'll be spoilt for cultural and culinary choice during your stay. If shopping is more your bag, there's plenty of that nearby, too.

The hotel features an Endota Spa for all your pampering needs as well a luxurious 12pm check-out time so you can relax all morning long during your stay. The best part? There are deluxe accessible rooms available complete with wheelchair-friendly showers. Pier One Sydney Harbour is perched right underneath the Sydney Harbour Bridge and is one of the city's most historic stays. The five-star hotel boasts spectacular views of Sydney Harbour and if you stay there more than once, you'll likely have a completely different experience as no two rooms are the same.

Got a pooch who you simply can't spend a night away from? This stunning harbourside hotel even has dog-friendly rooms so you and your four-legged friend can lap up the luxury together. Plus, there are plenty of dining options at your fingertips in Walsh Bay including Bar One and The Gantry Restaurant. The buses, train and light rail make getting around the CBD is pretty breezy — especially if your starting point is near Central Station. If access to public transport is high on your hotel hit-list, book into Four Points by Sheraton.

It's not just its prime position near Central Station that makes this place a great place to stay. It's also close to the bustling streets of Chippendale, Ultimo and Haymarket which are filled with top-notch eats, art galleries and theatres. Plus, there's a 24-hour fitness centre and an on-site restaurant and bar for when you don't want to leave the hotel.