Today marks the last day of Dark Mofo and, for those of us on the mainland, this means today is the last day our social media news feeds are bombarded with Tasmanian whimsy. Over the past few days you may have asked yourself what this congregation of lights and bearded men actually is. You may have wondered what kind of wizardry has conjured all this neon and Hogwarts-esque feasting, and how you can become a part of it.

Well, we've scoured our Instagram feeds and compiled a handy outsiders' guide for you. Organisers may declare the festival a celebration of "large-scale art, food, music, light and noise," but we feel it's best summed up by the following. Here's what went down at Dark Mofo 2014: This was probably the most confusing thing that's popped up in your feed over the past few days. In an act of — let's face it — supreme futility, Mofo-goers have been caught this year scrubbing a large tower of ice (although we guarantee they didn't keep it up for long once the photo had been uploaded). Watching this ice slowly, slowly erode into separate smaller blocks has been like a deeply unsatisfying game of Tetris played in reverse.

Explanation: It's actually an artwork by Chinese artist Yin Xiuzhen. After freezing water from the Derwent River, Xiuzhen asked festival patrons to scrub the dirty water clean. It's a symbolic act that she terms an artist's solution to pollution. This radioactive bunny made its way down from Sydney

Tasmania has stolen Sydney's giant neon bunny rabbit! How rude. You probably recognise this critter from your jaunts down to Vivid Sydney earlier this month. It's the kind of thing that definitely sticks in your mind (and your Instagram feed, for that matter). Because of this, Sydney-siders really can't be too jealous of its presence at Dark Mofo. But, for everyone else across the country, this is the holy grail of public art and the number one cause of jealousy. I maintain that if I got one hug from this amazing bringer of joy, at least half the problems in my life would be solved.

Explanation: The bunny is the work of Tassie artist (and Sydney expat) Amanda Parer. We can neither confirm nor deny that it's radioactive, but we can say that it's maybe the greatest thing we've seen for awhile. 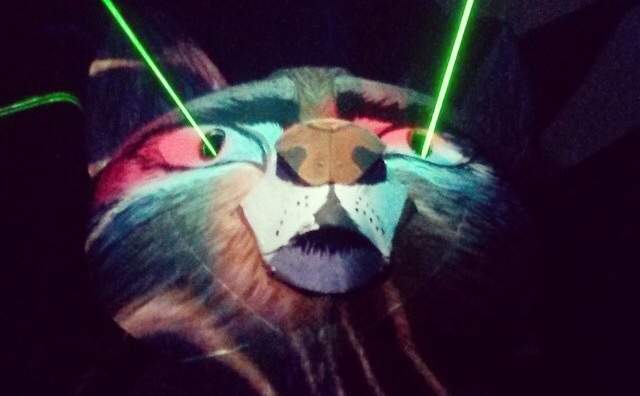 There was a cat shooting laser beams from its eyes

We can't even. This needs all of the explanations.

Explanation: Disappointingly, we can't find out much about this little treasure. From the almighty power of hashtags we can deduct it has something to do with Dj Kiti playing at the festival club Faux Mo on Saturday night. We don't know how big the cat was. We don't know how strong its powers are. We don't know what it wants from us. We do however know that it's maybe the most mesmerising thing we've seen since Hypnotoad and we feel strangely compelled to obey it. If you know more, please get in touch! It's a good place to be if you like to feast

From all the photos of mood-lit dining halls and opulent dinners, we can only reasonably deduct that Dumbledore and/or representatives from Hogwarts School of Witchcraft and Wizardry have made their way to Tasmania. Sure, there are no ghosts flying around, but the twigs cascading from the ceiling do look suspiciously like broomsticks and the feast speaks for itself.

Explanation: This is more or less right. The Winter Feast is one of the hallmarks of the festival and consists of a "three-night Bacchanalian banquet of  feasting and fire, drinking and celebration, music and performance". Apparently there were some problems with capacity this year, but with the amazing spread on offer it's easy to understand why. 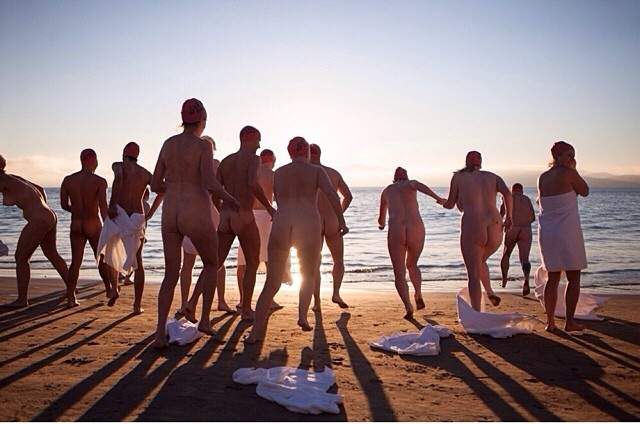 Everyone got naked for some reason

It's a strange thing to wake up to as you check your phone, but this morning we were treated to the sight of hundreds of bums along a beautiful beach at sunrise. Accompanying them (on what looked like a freezing morning) were a couple of old men in beanies shooting orange smoke into the air because, hell, why not?

Explanation: This nude run into the water was in fact to commemorate the winter solstice. It's an annual event at Dark Mofo that's now in its second year. And, despite the unpleasant temperature, this year saw 700 people get on board!

Confusing art, giant animals, laser beams, opulent feasts, and reckless nudity — why is it that we don't live in Hobart, again?