Pulling off a blockbuster retrospective of one of Australia's most loved landscape painters is ambitious in any year, but in 2020 it's a huge achievement. "It's the largest Streeton retrospective since 1931 — and I did try to compete with that exhibition," says the Art Gallery of New South Wales' head curator of Australian art, Wayne Tunnicliffe.

The new exhibition Streeton features more than 150 works by the Australian impressionist painter (only 20 shy of the one held by the Gallery 89 years ago), and its works come from public and private collections from around the country, including ones from Victoria, coordinated during lockdown.

The Gallery's exhibition follows Streeton's career from his early drawings to his latter years when the artist became a vocal environmentalist. "Streeton had a lifelong practice, but most galleries show his earlier works," says Tunnicliffe. In Streeton, you'll walk room to room seeing the progression from the revolutionary moment when Streeton and his contemporaries invent Australian impressionism to his journeys to London, Cairo, Venice and back to Australia.

In partnership with Destination NSW, we asked Tunnicliffe to pick out five paintings that tell us more about the talented painter's passions, and how they retain relevance today. 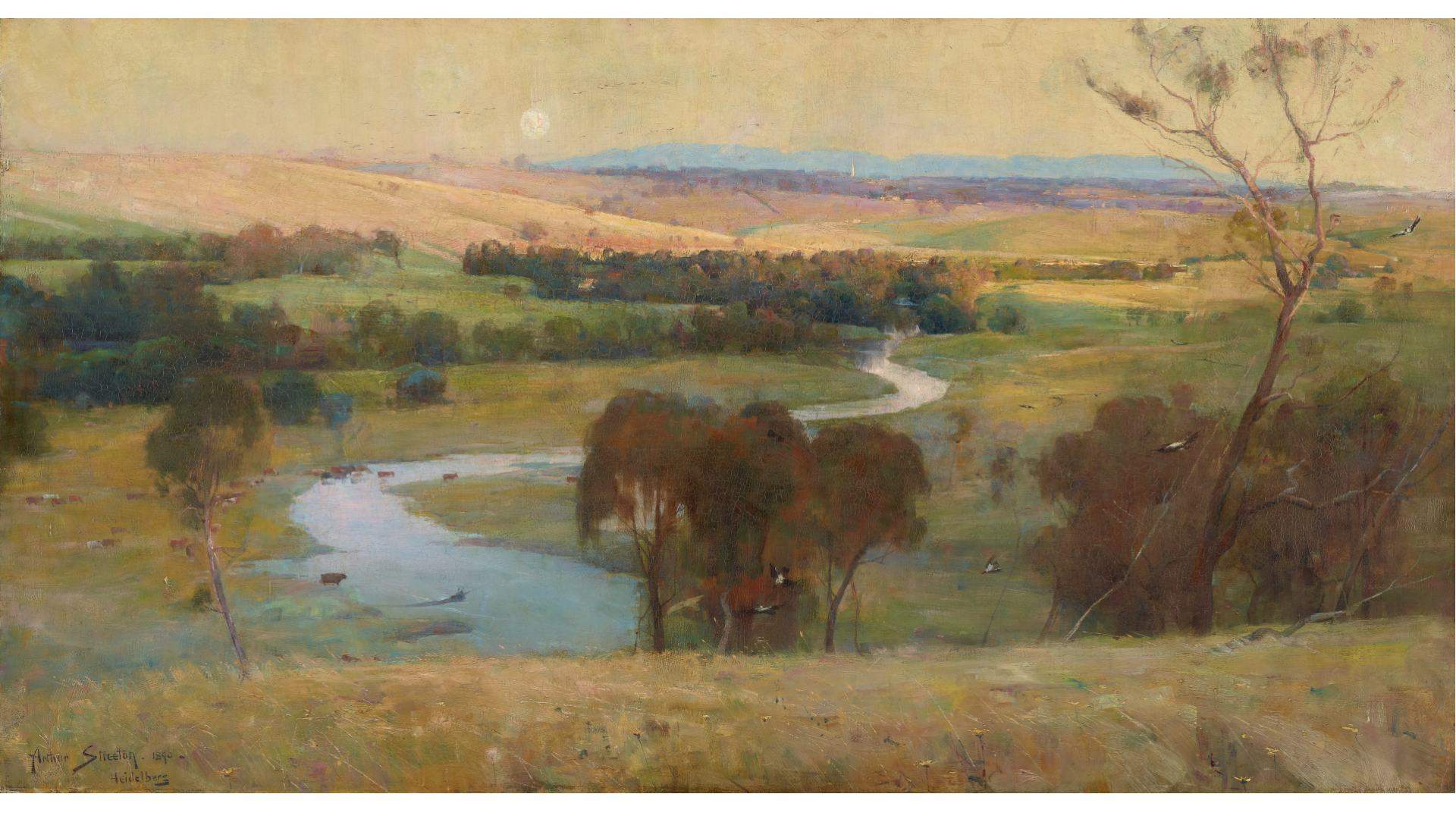 'STILL GLIDES THE STREAM AND SHALL FOR EVER GLIDE' (1890)

The Victorian artist was only 22 years old when he painted 'Still glides the stream, and shall for ever glide', and the Art Gallery of New South Wales buys it the year it was painted — transforming Streeton's career. "It's his first acquisition by a public art gallery, and that financial support means he's able to come to Sydney and live, and paint those extraordinary Sydney harbour scenes," says Tunnicliffe. "[The acquisition] is saying Australian impressionism is important and that we need to take it seriously."

The painting has been on public display ever since, and the curator tells us it was Streeton's way of implying nature's persistence. "Nature is here forever. Streeton tries to encompass this in the painting, and it suggests that we will endure with it, and by extension, the creative act of this painting will endure as well."

Streeton and his Heidelberg School contemporaries were inspired by the French movement of painting en plein air (outside), and they were making it their own, here in Australia. As Tunnicliffe tells us, the Gallery's forward-looking trustees of the time were keen to support and validate this new style of painting. After Streeton's cash injection, he comes to Sydney and falls in love with its beaches and harbour. In Streeton, you'll find scenes of bathers at Coogee Beach, ferries picking up passengers at McMahons Point and the rocky harbour around Sirius Cove. "He paints the life around him, as impressionists do around the world," says Tunnicliffe. "When he comes to Sydney, he's transfixed by the harbour and the beaches, but the working harbour is what he gets really interested in. This bustling, modern, growing, booming city."

"In this painting, 'Circular Quay', you can see the Quay at work: people strolling, ferries puffing, boats arriving on a bright, hot day. And, of course, we can see that scene now. It looks different, but we can be in that spot where Streeton is and experience that." Sydney alone is not enough for Streeton. He actively travels to the Blue Mountains, Gloucester and across regional New South Wales to capture the Australian landscape. In 1896, he travels to Richmond, buys a cheap horse called Pawnbroker, and rides out to a raised area above the Hawkesbury River to paint 'The purple noon's transparent might'.

"It's 44 degrees when he paints this. It's a heatwave and he's out there literally suffering for his art," says Tunnicliffe. "What he captures is the extraordinary intensity of Australian light and colour on this hot, hot day." It's an example of Streeton's tenacity, his commitment to recording what he finds before him, and Tunnicliffe says he thinks it's "one of the great landscape paintings in Australian art."

"What's remarkable about this work is that it's never been varnished. It's matte paint, as Streeton painted it in 1896. It's been conserved over several months, so it looks now like it did when it left Streeton's studio. You can see the really visible brushstrokes — the way he's pushing that paint around to get that effect. But also, that shifting, shimmering light." Fast forward to the 20th century. Streeton's lauded as one of Australia's greatest landscape painters all before he turns 30, and he's looking to prove himself overseas.

"Streeton leaves Australia in 1897 because he feels he's done as much as he can at that point in his life. He wants to challenge himself; he goes to London and he struggles. But, going to Venice in 1908 on his honeymoon, and painting over 80 views on two visits in that year, he exhibits these in London and that's when he gets recognition. Because he takes a real risk."

Venice is one of the most painted scenes by some of the most famous artists in the 19th and early 20th century, explains Tunnicliffe. "He pits himself against them and he's very well reviewed. This particular painting is one of two he did on this scale, with this ambition."

This aerial view was painted from high up on the palazzo looking up the Grand Canal. Interestingly, both his large-scale Grand Canal paintings have been missing for decades. "This one was recently rediscovered in a private collection in regional Victoria," says Tunnicliffe. "And so, this is the first time it's been shown publicly for many decades. It's in completely original, untouched, unconserved, condition — this is what a painting looks like after 100 years." 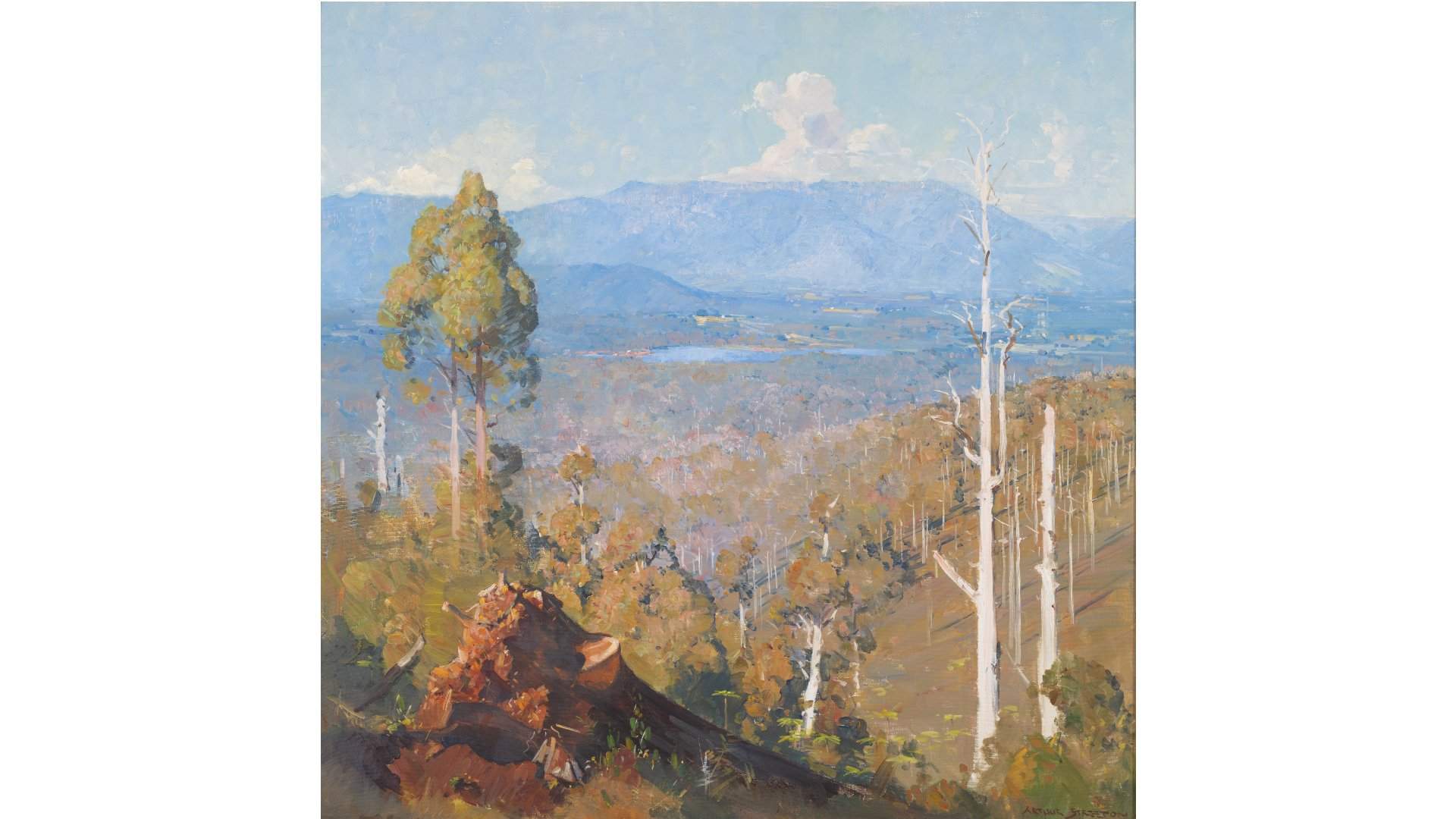 Arthur Streeton, 'The vanishing forest' (1934), oil on canvas, 122.5x122.5cm, on loan to the Art Gallery of Ballarat from the Estate of Margery Pierce

By the 1920s, Streeton was an established artist, and somewhat of a celebrity. He's returned to Australia, painting pastoral landscapes, and living in the house he's built in the Dandenong Ranges with his wife Nora. And it's during this time that the artist uses his prestige to actively campaign to save the environment.

"He was deeply concerned when he came back to Australia in the 1920s, seeing much-loved landscapes being cut down." In 'The vanishing forest', Streeton is making a statement. It's a large-scale painting, intentionally similar in size to his most famous works, and, as Tunnicliffe tells us, he's asking Australians to take the destruction seriously.

"He paints mature trees that have been ring-barked, a tree that has been bulldozed and is soon to be cut up. He really wants us to think hard about this, and about what we're doing to our environment, and that message is still so important."

Tickets to 'Streeton' cost $22 and you can buy timed-entry tickets online. If you've already purchased untimed and undated tickets for 'Streeton', they will be honoured for any date and time until February 14, 2021. For $35, you can upgrade to a Gallery Pass, which gives you access to 'Streeton' and the 'Archibald, Wynne and Sulman Prizes 2020'.