Throughout Japan's history, the country has gone through several periods of rapid transformation. The NGV's latest exhibition, Japanese Modernism, explores one of them: the prosperous era from the early 1920s until the late 1930s, a time that spawned financial independence for women and access to international travel. As movie theatres, department stores and modern transport became widespread, life quickly changed for Japan's urban dwellers.

Featuring 190 works that consider the country's shifting social and cultural values, Japanese Modernism highlights these changes through an array of creative mediums that see traditional Japanese techniques blended with European influence. There are colourful woodblock prints that fuse ancient ukiyo-e methods with modern elements, plus a plethora of kimonos, street posters and glassware.

Running until Sunday, October 4, Japanese Modernism is completely free to attend. You'll be amongst the first to see these works in Australia, too — the NGV has spent the last five years amassing this impressive collection from around the world.

To give you a quick primer before you head along to the NGV, we've picked out five inspirational works to see at Japanese Modernism. 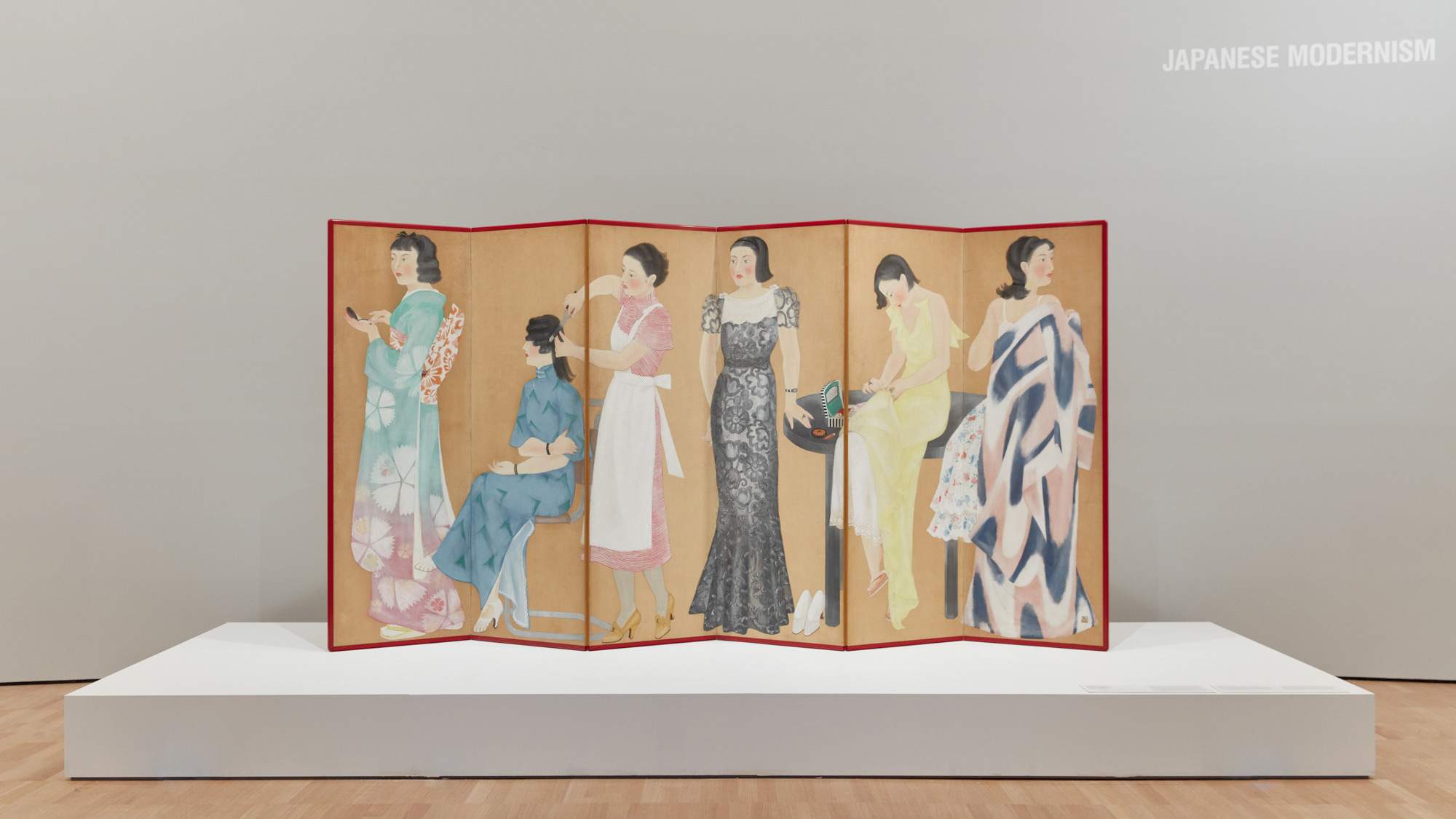 PREPARING TO GO OUT (1935) BY TANIGUCHI FUMIE

As a key figure in Japan's emerging generation of the time, known colloquially as 'moga' and 'mobo' — modern girls and modern boys — Taniguchi Fumie burst onto the scene to great success in the 1930s. However, Fumie's glowing artistic career came to an early halt with the onset of World War II, as she was evacuated to the countryside and her work faded into obscurity.

One of Fumie's most lasting works, Preparing to go out, was produced as a large-scale, sixfold design that draws directly from the 17th-century style of Matsuura screens. This modern take on a fundamentally traditional art form sees Fumie depict a group of friends getting ready for a fun night out, leaving behind their previously reserved existence. With many Japanese cities being quickly redeveloped during this era, a large population of women waved goodbye to the countryside and went in search of jobs and a modern lifestyle in the metropolis. This change gave rise to the first generation of financially independent female artists, who set about creating art that explored their new reality.

Saeki Shunkō was one of these pioneering artists. Her 1939 painting, Tea and Coffee Salon, Sabō, presents two modern Japanese women wearing Western-style uniforms, highlighting the shifting dynamics of the country. This changing way of life for the nation's youth, especially women, showcased how they were no longer beholden to their parent's conservative values. Inspired by popular European art movements like Cubism, Futurism and Fauvism, Japanese artists began mixing these styles within their own work. One magazine in particular, called Kodomo no kuni or Children's Land, which was groundbreaking at its time, began using these styles throughout its pages and on its cover. The magazine was popular with children and young adults, as it encouraged the new generation to embrace individuality.

Takei Takeo was one of the magazine's key contributors, producing works that blended geometric shapes with shadows and bright colours. His 1928 cover design had a two-fold appeal to children of the time, as it linked an exciting style of art with the modern train system, which was beginning to roll out across Tokyo. THE FIRST SUBWAY IN THE EAST (1927) BY HISUI SUGIURA

Described as a pioneer of Japanese graphic design, Hisui Sugiura was at the forefront of the nation's commercial art industry. Although he had a traditional painting background, his interest in Europe's art nouveau movement led him to form the artist collective known as Shichinin-sha, aka the Group of Seven. Through his position as the Mitsukoshi Clothing Store's chief graphic designer, he exposed Tokyo's residents to a wave of contemporary design.

Created in 1927 to celebrate the opening of the Tokyo Metro Ginza Line — the first subway in Asia — this poster is regarded as a cornerstone of Japanese modernist design. Expressing the changes occurring across Japanese society, Sugiura draws those at the distant end of the platform in traditional garments, while the families at the front of the scene appear in distinctly modern clothing. The Tokyo Mitsukoshi Clothing Store is the oldest-surviving department store in Japan, with its origins as a kimono maker dating all the way back to the 17th century. Having opened as a modern-day department store in 1904, it was partially destroyed by the Great Japan Earthquake of 1923. However, it relaunched in 1926 with modernist architecture and a host of retailers that sold products that appealed to the new Japan.

Japanese Modernism is on display at the National Gallery of Victoria, Melbourne until October 4, 2020. It's free to attend. Find more exhibition details at the NGV website.