The Australian-first exhibition charts the relationship, friendship and rivalry between two of the 20th century's greatest artists across more than 200 paintings and sculptures.

The Australian-first exhibition charts the relationship, friendship and rivalry between two of the 20th century's greatest artists across more than 200 paintings and sculptures.

This summer, the National Gallery of Australia comes to life with a major exhibition on two greats of the modern art movement. Matisse & Picasso presents an Australian-first gathering of the iconic works of Henri Matisse and Pablo Picasso, with the pair's intense friendship and rivalry considered a defining factor behind contemporary art's development during the 20th century.

The pair first met in 1906 when Picasso was essentially unknown to the art world, but Matisse was already considered one of the avant-garde's most prominent artists. Staying close throughout their lifetimes, they looked to each other's work, responding and challenging their peer to stay on the cutting-edge. As Picasso  explained to one of his biographers Pierre Daix, "No one has ever looked at Matisse's painting more carefully than I; and no one has looked at mine more carefully than he."

Running until April 13, 2020, Matisse & Picasso showcases more than 200 paintings, sculptures, prints and costumes. Across many of their most famous works, Matisse & Picasso makes the artists' intrinsic connection clear. The exhibition has been designed so instead of walking from start to finish, you'll be wandering back and forth between the artworks as the similarities emerge.

To give you a head start before your visit to the NGA, we've picked out six artworks that you can't miss at Matisse & Picasso. 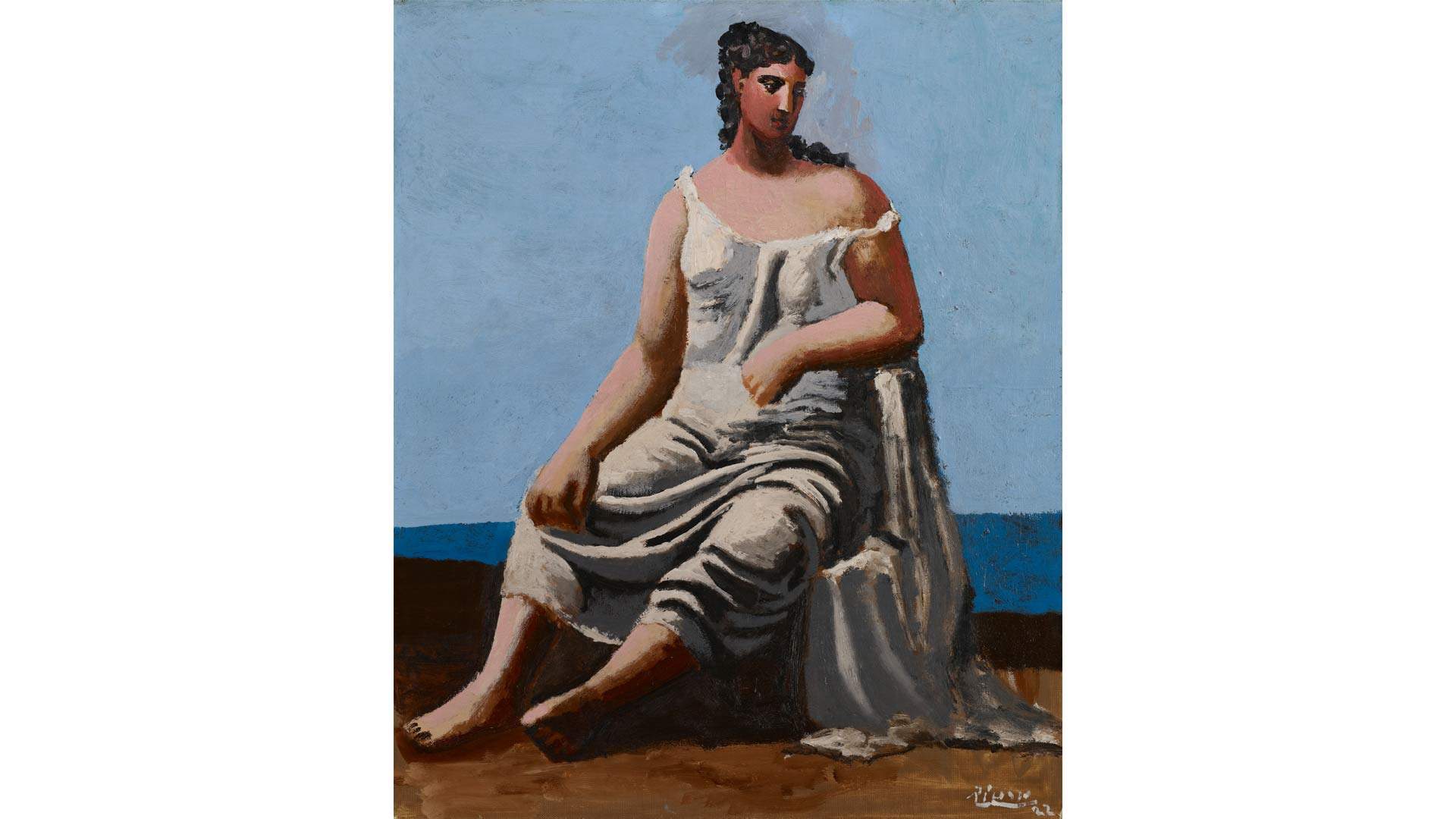 Following the First World War, both Picasso and Matisse demonstrated a deep fascination with classical Greek art and stories. A distinct departure from the Cubist aesthetic that he's best known for, 'Woman by the Sea' is one of many paintings with dreamy human figures set against plain landscapes that Picasso would go on to produce. Taking inspiration from the ancient statue known as Venus de Milo and a sculpture of the Greek goddess Hera that he saw in Naples, for this work, Picasso translates the relaxed posture and flowing dress of the marble structure into a two-dimensional format. As you look over the art of Matisse, one of the most common motifs that repeatedly appears is his use of open windows. Following the end of the war, a despondent Matisse retreated to southern France where he found inspiration within the soft colour palette and charming interiors of the region. Turning his hotel rooms into art studios, these intimate quarters provided him with a new creative drive that became emblematic of his art. "[Matisse] was inspired by the southern light and painted a series of light-filled hotel rooms facing the sea," explains NGA's Curator of International Painting & Sculpture Simeran Maxwell. "When Picasso paid homage to Matisse after his death, he used this distinctive device in his own paintings." Throughout Matisse and Picasso's lengthy careers, the various women in their lives often became the subjects of their artworks. Reading features one of Picasso's most adored muses, Marie-Thérèse Walter, whose face and figure was interpreted in a variety of ways through dozens of paintings and sculptures. Reading also demonstrates a significant change in artistic direction for the Spanish artist, showcasing his newfound interest in bold colours and patterning — a style that Matisse had been using to great effect within his artwork. Following trips to Morocco in 1912 and 1913, Matisse became fascinated by the bright clothing, distinct architecture and the daily life of the locals, which was so foreign to him having only experienced life in France. One way that the North African experience influenced his artwork was the inclusion of models dressed as odalisques — members of harems — alongside vibrant textiles that he had collected during his visit. For this work, Matisse "uses an appliquéd wall hanging as a backdrop for model Henriette Darricarrère dressed in Moroccan pantaloons and a sheer blouse," explains Maxmwell. Over two weeks in 1955, Picasso painted 11 canvases of the studio in his Cannes villa known as La Californie. While the idea of the artist within the studio was something that Picasso explored many times during his career, this series stands out as the structure of the building is the central focus of the work. With the studio one of the subjects that often appeared in Matisse's work, it's been suggested that Picasso created this series in direct response to his contemporary's death the previous year. As Maxwell describes it, "One of Matisse's longstanding subjects was an interior scene with a view through a window. Here Picasso adopts this idea, as homage to his late rival." Matisse was best known for his colourful paintings and sculptures. But he often expressed the belief that drawing was the most intimate way to translate a subject onto the page. In 1946, he met Dutch model and artist Annelies Nelck, who would spend six years living with Matisse and posing for his artwork. "He would repeatedly draw the model from all possible angles with a deliberate, confident and clean series of lines," explains Maxwell. "When viewed in order, it would appear as if Matisse had been circling his model as he worked." Matisse described this process of repetitive and intensive creative process as "a cinema film of a series of visions".

Matisse & Picasso is on display at the National Gallery of Australia, Canberra until April 13, 2020. Tickets and exhibition information are available on the NGA website.