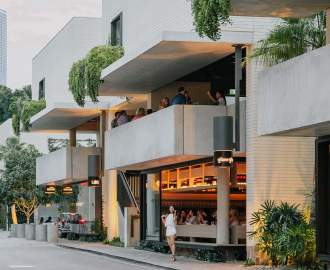 "Franchise" needn't be a dirty word in Hollywood, and the Mission: Impossible movies are shining examples as to why that is. Now in its sixth instalment, this isn't just a franchise done right. It's a franchise that somehow improves with each new chapter – an ongoing escalation of stakes and stunts that never sacrifices the intelligent, honest and light-hearted storytelling that's been so critical to the series' sustained appeal.

At the forefront once again is leading man and producer Tom Cruise, whose capacity for performing increasingly complex and outrageously dangerous stunts remains inversely proportionate to his age. In Mission: Impossible – Fallout his IMF agent Ethan Hunt is at it again, weaving cars and motorbikes through the traffic-packed streets of Paris, HALO jumping from 30,000ft and leaping across rickety London rooftops. Cruise even accrued over 2000 hours of helicopter flight time prior to filming, all so that he could personally perform what is arguably the film's most thrilling and death-defying sequence. His love of filmmaking is apparent in every frame he occupies, and its value to the enduring allure of the franchise cannot be overstated. That the Mission Impossible brand could survive beyond Cruise's involvement seems far less assured than, say, James Bond or Batman.

Not unlike the two most recent Bond films, Fallout compels its hero to shine a light on his own past deeds, with the movie's title referring not just to the literal threat posed by three nuclear devices but also the consequences of a lifetime spent obediently killing, stealing and undermining at the behest of the US Government. Adding to the emotional stakes, Fallout also repeatedly asks its characters to weigh up the value of a human life, presenting them with multiple scenarios in which they're forced to choose between the one or the many – knowing that either path carries with it irreconcilable guilt and heartache. Written and directed by Christopher McQuarrie (whose return to the franchise marks the first repeat involvement by a director, with McQuarrie having also written and directed the previous instalment, Rogue Nation), Fallout achieves the rare feat of being an unceasing action movie that always feels more like a drama. There is no superfluity here. Every punch, shot, jump, crash and explosion exists because it must. This is a story-driven international escapade that never stops to sit down and catch its breath.

Around Cruise the IMF family assembles once again, with Ving Rhames, Simon Pegg, Alec Baldwin and Rebecca Ferguson packing equal measures of comedy and conflict into every scene they get. Man of Steel's Henry Cavill also joins the action, with his lumbering, muscular CIA assassin representing an appealing counterpoint to Hunt's penchant for the softer, tradecraft touch. He and Hunt are at once rivals and compatriots – two competing assets unwillingly paired together in pursuit of a common goal. Or so it seems. As always, the Mission: Impossible franchise throws up all manner of red herrings, double-crosses and mask-pulling identity swaps, meaning – just like the characters – you're never quite sure who to trust.

If the story borders on confusing at points, it's only because the time-honoured tradition of spy movies commands nothing less. Ever since 1996, this series has unapologetically embraced jargon-heavy dialogue and twists upon twists without ever feeling compelled to play it safe or dumb things down (Mission: Impossible 2 being the regretful exception). If most sequels fail because they're rushed into production purely to capitalise on their predecessor's success, Fallout demonstrates the benefit of having the patience and the discipline to say: we will make this film not when, but if a good enough story comes our way. So it is that McQuarrie, Cruise and company deliver a benchmark setter for action movies – a rollicking, tense and captivating piece of cinema that begs to be enjoyed on the big screen.