Whether you're keen to brave an icy winter dip or you're already dreaming of next summer, it's time to start planning your next trip across the ditch.

It might seem counterproductive to leave Australia in search of a beach holiday, but across New Zealand's 15,000 kilometres of pristine coastline, there are more sheltered seafronts, rugged cliff-lined shores and black sand beaches than you can shake a towel at. Deciding where to spend the warmer months with sand in every crevice and saltwater lapping around your ankles can be an adventure in itself.

This month, New Zealand enters another phase in its post-COVID reopening plan, and from 11.59pm NZST / 8.59pm AEST on Tuesday, April 12, we can once again visit our closest neighbours without needing to quarantine on arrival.

If you've got a trip over the ditch on your 2022 wishlist, we've put together a list of some of the best New Zealand beaches that you should visit at least once in your lifetime — whether you're keen to brave a winter dip or you're just already dreaming of next summer's sojourns. Found around 90 kilometres from Auckland central, Tāwharanui Regional Park offers the full spread of summery activities for keen adventurers. Once you've reached the end of the gravel access road, you'll be greeted by beautiful white sand shoreline, easy walking tracks and crystal-clear rock pools up for exploration. It's also known to pump out some beginner-friendly waves, so don't forget to pack your preferred floatation device. And to really make the most of your trip, book a spot at the tent campsite so that you can stare at the clear skies above. 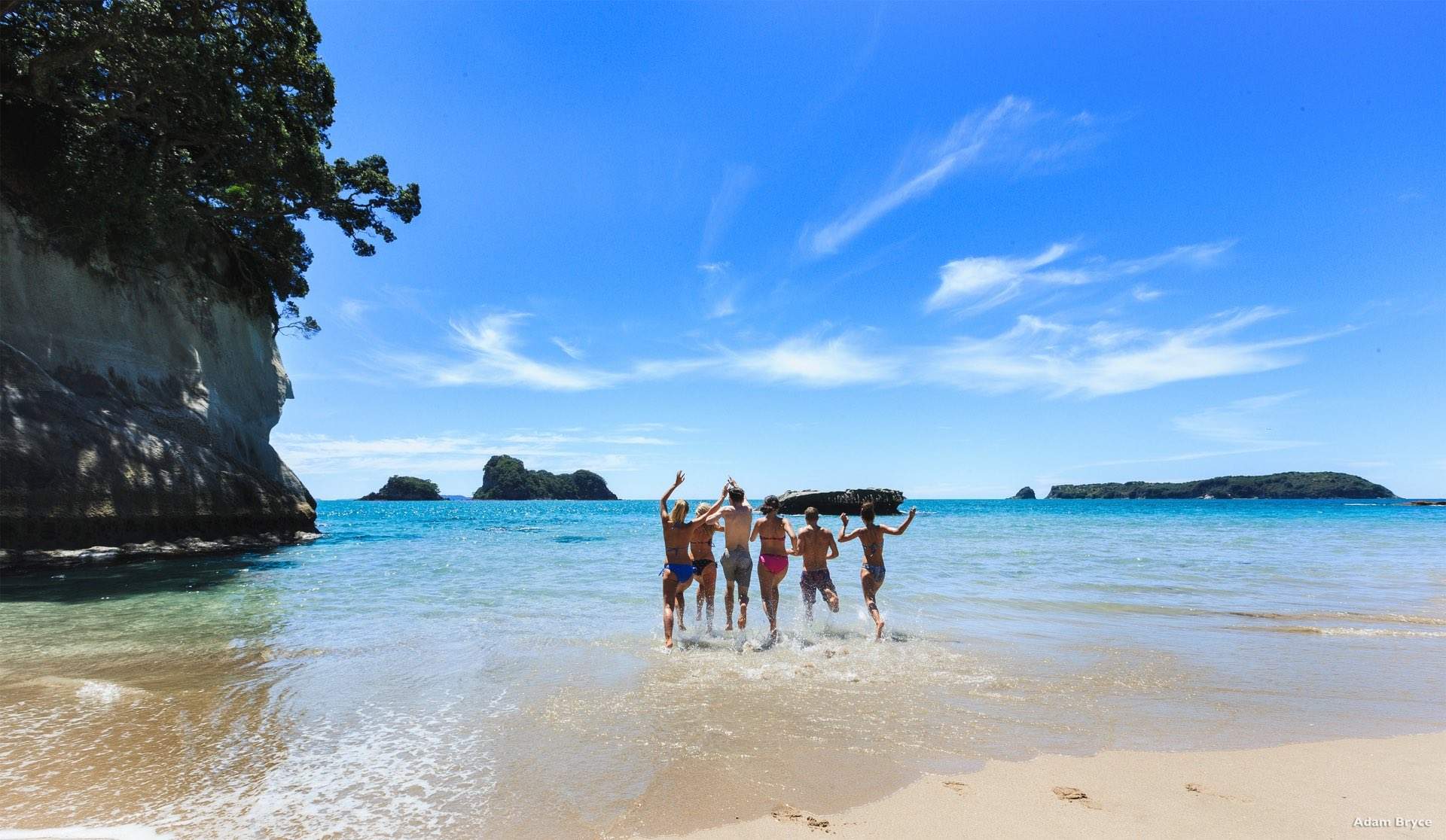 This gem is a must-do in the Coromandel — and for good reason. Golden sand and a stunning natural rock archway await, whether you decide to arrive at the picturesque spot by boat, kayak or on foot. Leaving from Hahei, the 45-minute walk is well maintained and traverses rugged farmland, before delving into native bush. There are plenty of dramatic vantage points for photo opportunities, but the main event is the beach where you can easily wile away an entire afternoon. It can be hard to pick just one beach in the Abel Tasman, but how about starting with Anchorage Bay? The horseshoe bay is home to the first large beachside camping spot along the Abel Tasman walking trail and where boaties anchor their vessels — making it one of the more popular destinations in the national park. Here you'll find sweeping golden sand and turquoise blue waters, with a number of short walks leading to smaller secluded bays and stunning natural rock formations. During low tide you can walk across the tidal estuary to Torrent Bay. It'd also be rude not to mention (and jump in water taxi to) Kaiteriteri. To really feel like you're on a tropical island, head to Maitai Bay at the point of the Karikari Peninsula. With its golden sand and crystal-clear blue water, the small sheltered horseshoe bay is something straight from a postcard. The destination can be extraordinarily popular in the summer months, so much so that local iwi declared the region a "no-take zone," in 2018 to allow sea life to recover. The rahui on fishing has finished, but we still recommend you reserve your time here for swimming, snorkelling and kayaking. If you're seeking a thrill, head through the bush at the right end of the beach and you'll find a stone ledge that serves as the perfect diving board. Book well in advance for a spot at the DOC campground. 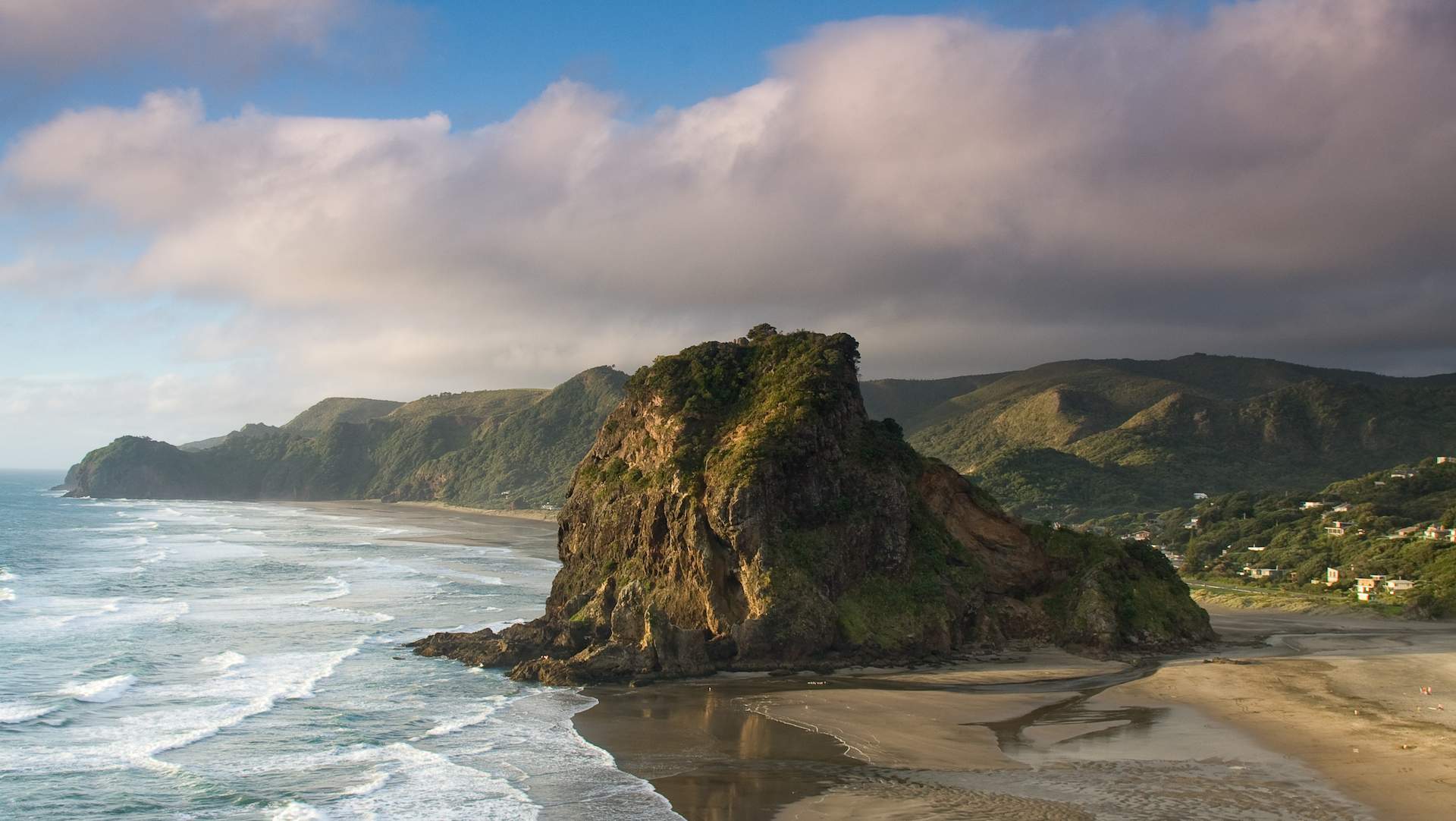 Swim with caution at this rugged west Auckland beach. Piha might be best known for its strong currents and New Zealand's television answer to Bondi Rescue, but it's also a stunning location to spend the day. Choose your real estate on the hot black sand (don't forget footwear) and then cool off between the flags. Walking tracks can be completed along the headlands and up to scenic lookouts, while further along the coast are equally as wild beaches like Karekare and Muriwai where you can take a surf lesson and go horse trekking. 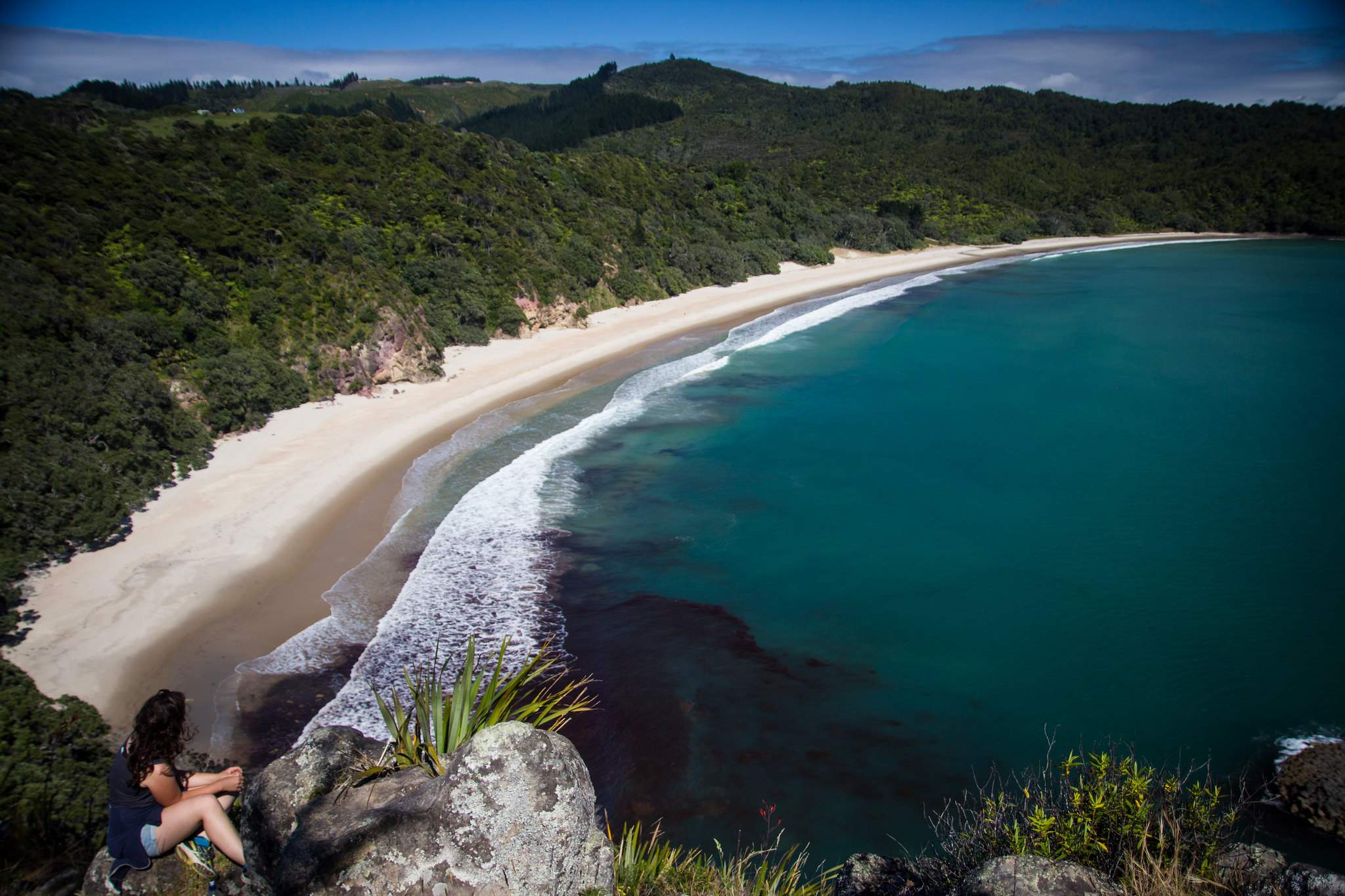 Hidden away from the masses for most of the year, New Chums has previously been voted as one of the world's top ten beaches. The stretch of golden sand on the Coromandel Peninsula is fringed by pohutukawa and native forest and has no buildings, roads or infrastructure. Access to the one-kilometre undeveloped stretch of paradise is by boat or via a rocky foreshore walk from the Whangapoua car park. And once you're there it's no uncommon to spot marine life swimming the length of the beach. Awaroa made headlines in 2016 when it was bought via crowdfunding campaign by the New Zealand public for over two million dollars and then donated back to the national park. The secluded golden banks of Awaroa are only accessible to those walking the Abel Tasman Coastal Track two hours either side of low tide, or by boat or helicopter. A short walk inland there's the Awaroa Lodge where you can enjoy pizza under a glade of native trees, and there are several glamping and camping options for overnight holidaymakers. Sometimes called Ocean Beach, Main Beach or Wainui Beach, this wild black sand beach with consistent waves is ideal for groms learning how to surf. The Raglan Surf School is parked up right on the vast west coast stretch for those keen to get in on the action, while more experienced riders can hire boards and wetsuits by the hour. With unforgiving riptides, ocean swimmers should stay between the flags. Hang around until the end of the day and you'll cop an extraordinary sunset. This windswept beach has to be one of the country's most photographed sections of coastline. The beach is only accessible via a 20-minute track from the end of Wharariki Road, which travels over farmland and through coastal forest. With particularly big seas, sight-seeing is the number one attraction here — and the Archway Islands will certainly serve up the goods. The group of four rock formations rising from the tide provide an exception photo opp, especially if you decide to tour the region on horseback. 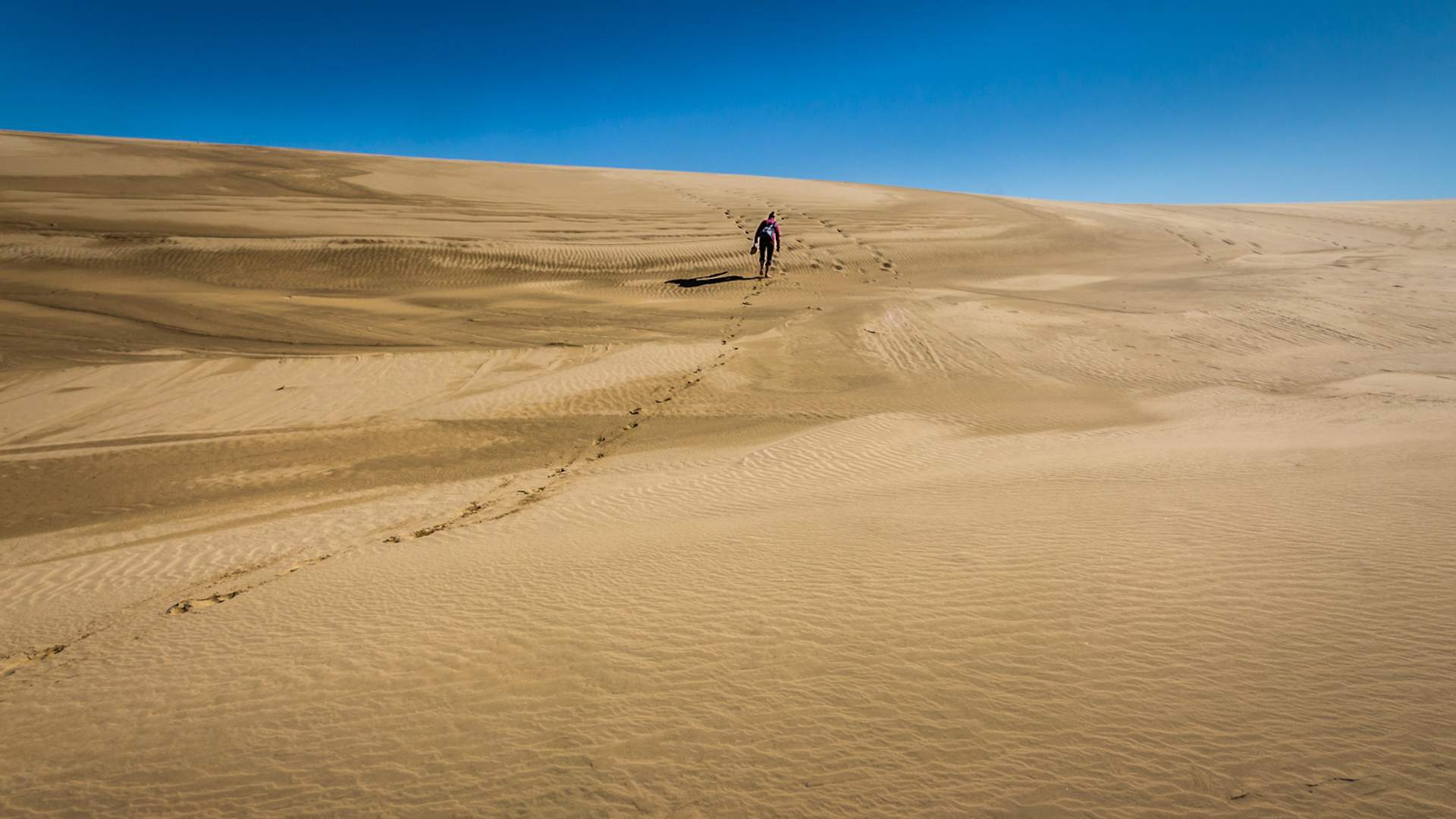 From 11.59pm NZST / 8.59pm AEST on Tuesday, April 12, double-vaccinated Australian tourists will be able to holiday in New Zealand without needing to isolate on arrival. Tourists will be required to test negative for COVID-19 with a PCR or RAT before leaving Australia for their trip, before providing negative tests on day one and day five of their stay in New Zealand.