It's the first step in the site's hefty transformation, with wetlands, a lake, bike trails and a treehouse lookout all to come.

Sometime in the near future, Brisbanites will be able to mosey through wetlands, kayak and canoe in a lake, ride along rainforest mountain-bike trails, peer out from a treehouse lookout and climb a high-ropes course — all on the edge of Brisbane's CBD. That's what's slated for the revamped Victoria Park, with the Herston spot in line for a hefty makeover. The first step: shutting the Victoria Park Golf Course and reopening its 45-hectare expanse as a public park.

That initial move has already been taken, in fact. Sorry, golfers. And, with all that land now reclaimed, the Brisbane City Council has announced that everyone can head along to the grassy locale for picnics, to kick a footy around and to walk your dog. It's the first time in nearly a century that the land has been open to everyone, too, if you need even more of an excuse to head by.

Given that this is just the first step in the site's transformation — which has been dubbed Victoria Park Vision — more changes are on the way. Brissie residents can still make the most of all that greenery while that's happening, though, including by sitting underneath the site's jacaranda trees. And, the existing putt putt course, driving range, bistro and function centre are all staying open while the revamp takes place, should you have the urge to play mini golf or grab a bite to eat.

"Opening the park to the public is a major step in our plan to deliver a once-in-a generation project which will restore the park to its former glory and reconnect visitors with local history, culture and nature," said Brisbane Lord Mayor Adrian Schrinner.

"Brisbane residents have helped shape what all 64 hectares of parkland will look like and we're in investing $83 million over four years to start to bring this vision to life, which will eventually see waterholes and wetlands, nature playgrounds, an adventure valley and so much more," he continued. First announced in mid-2019, the new vision for Victoria Park will significantly change the current space. Late in 2020, following several stages of community consultations and draft proposals, the council released its final plan for what that'll entail. Over the 64-hectare site — the golf course's 45 hectares, plus some surrounding land — the park will specifically increase the area dedicated to green space. Also on the agenda: a cultural hub, artwork and trails paying tribute to Australia's Indigenous heritage, plus plenty of shady foliage including revegetated forests and pockets of native bushland.

There'll be dining areas and picnic spots, too, and community gardens — or perhaps even a small urban farm or urban orchard. Multipurpose spaces such as a green amphitheatre will be designed to host events year-round as well, including performances and exhibitions. 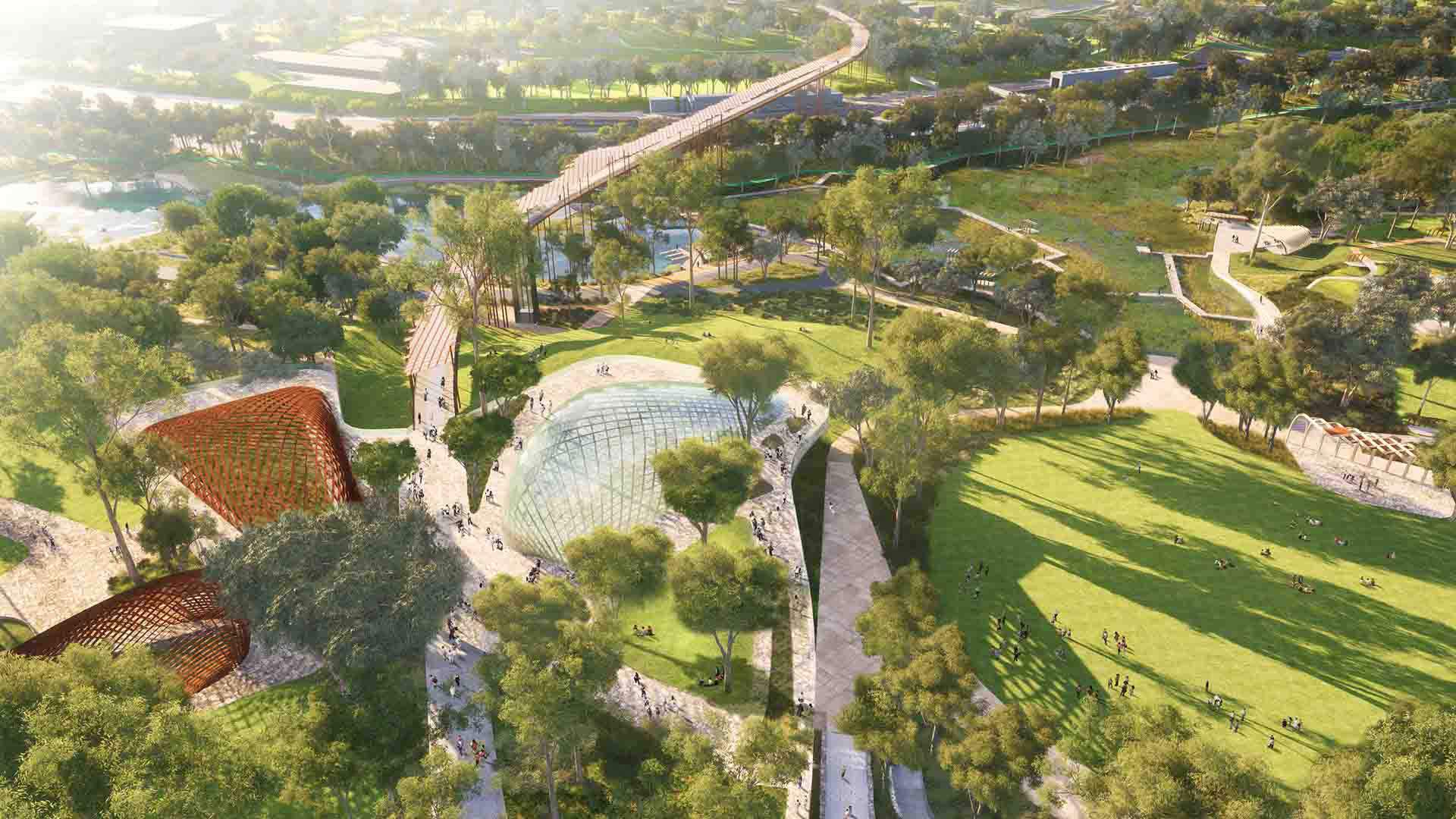 An artist's impression of Victoria Park once the revamp is complete.

In addition to the aforementioned Lake Barrambin — where you'll be kayaking and canoeing — the site will feature lagoons and wetlands, a 'nature and water play gully' for kids, restored waterholes for wildlife, and waterside boardwalks to mosey along. And the existing Centenary Pool will be part of the park, if you're keen for a dip.

When it's all done, the transformed Victoria Park will become Brisbane's biggest new park in five decades, and one that'll alter the face of the inner city. A completion date for the revamped park is yet to be set, but we can all now drop by, laze around on the grass and watch that change happen.