The City of Sydney has unveiled the first phase of George Street's super revamp.

The City of Sydney has unveiled the first phase of George Street's super revamp.

Teetering over 50 metres above George Street beside Sydney Town Hall, a streamlined, cloud-shaped arch is one of three brand new public artworks coming to Sydney's CBD — to be installed as part of the City of Sydney's George Street-based revamp. An oversized milk crate pavilion and 60 delicate handmade bronze bird sculptures by notorious British artist Tracey Emin have also been confirmed by the City of Sydney today.

Designed by Tokyo-based architect and artist Junya Ishigami — winner of the coveted Golden Lion for Best Project at the 12th Venice Architecture Biennale and visiting professor at the Harvard Graduate School of Design — Cloud Arch will act as a gateway to the newly pedestrian-friendly George Street, with the brand new light rail passing right underneath it — kind of like an elegant, minimalist Colossus of Rhodes for Sydney's CBD.

"Green, global and connected are the characteristics of the new Sydney, and this new public space about to be created in George Street will be the exact manifestation of these qualities," says Ishigami. "Good public policy is not, in itself, enough — there is a need for a new symbol to embody and communicate these qualities to the world. The Cloud is that new symbol, comprehensible to all. The Cloud evokes comfort, openness and freedom." At 50 metres high and significantly ribbony, you might be wondering how Cloud Arch will stand up to those pesky CBD wind gusts or densely-populated flocks of art-hating birds. Using a single box beam as the central construction framework, Ishigami's tapered steel plates will apparently stand up to the elements without a hitch. Cloud Arch will also change shape from wherever you're getting a crick neck looking at it around the CBD, classic perspectival win (it should be visible from as far north as Wynyard station, the Coca Cola sign on Darlinghurst Road to the east and Liverpool Street to the south).

Meanwhile, in the southern end of the city, an oversized milk crate will make Belmore Park its new snuggly home. Nestled next to Central Station, the 13.7 metre high, milk crate-shaped pavilion has been designed by Sydney-based, Egyptian-born artist Hany Armanious. Ol' Milky (not it's actual title, it's really called Pavilion but this kid's sticking with Ol' Milky) will offer seats and lighting within its 42:1 enlarged body, breathing new life into the somewhat raggedy Belmore Park. "Pavilion is a representation of the most humble and ubiquitous of urban forms... transformed into a grandiose and extravagant public oasis," says Armanious. "At such a scale it assumes the authority and majestic beauty of a gothic cathedral or Greek temple, while remaining intrinsically contemporary.

"Belmore Park is one of the few clear open spaces in central Sydney and is therefore a natural meeting place... Pavilion is a bold interpretation of a pavilion for all, a place for contemplation and repose, but also performance, community gatherings and ceremony." Heading back to the northern end of the CBD, through the refurbished Kent Street underpass and around Bridge and Grosvenor Streets, Young British Artist and notorious character Tracey Emin has a little magic of her own to sprinkle on Sydney. My Bed creator will introduce a brand new, permanent installation to the area titled The Distance of Your Heart, comprised of 60 handmade bronze bird sculptures.

Paired with a plinth dedicated to homesickness, the Emin birdies will hang out along the thoroughfare, perch on doorways and telegraph poles and remind the homesick and lonely there's someone thinking of them. It could possibly be the nicest, prettiest thing Emin has ever done. 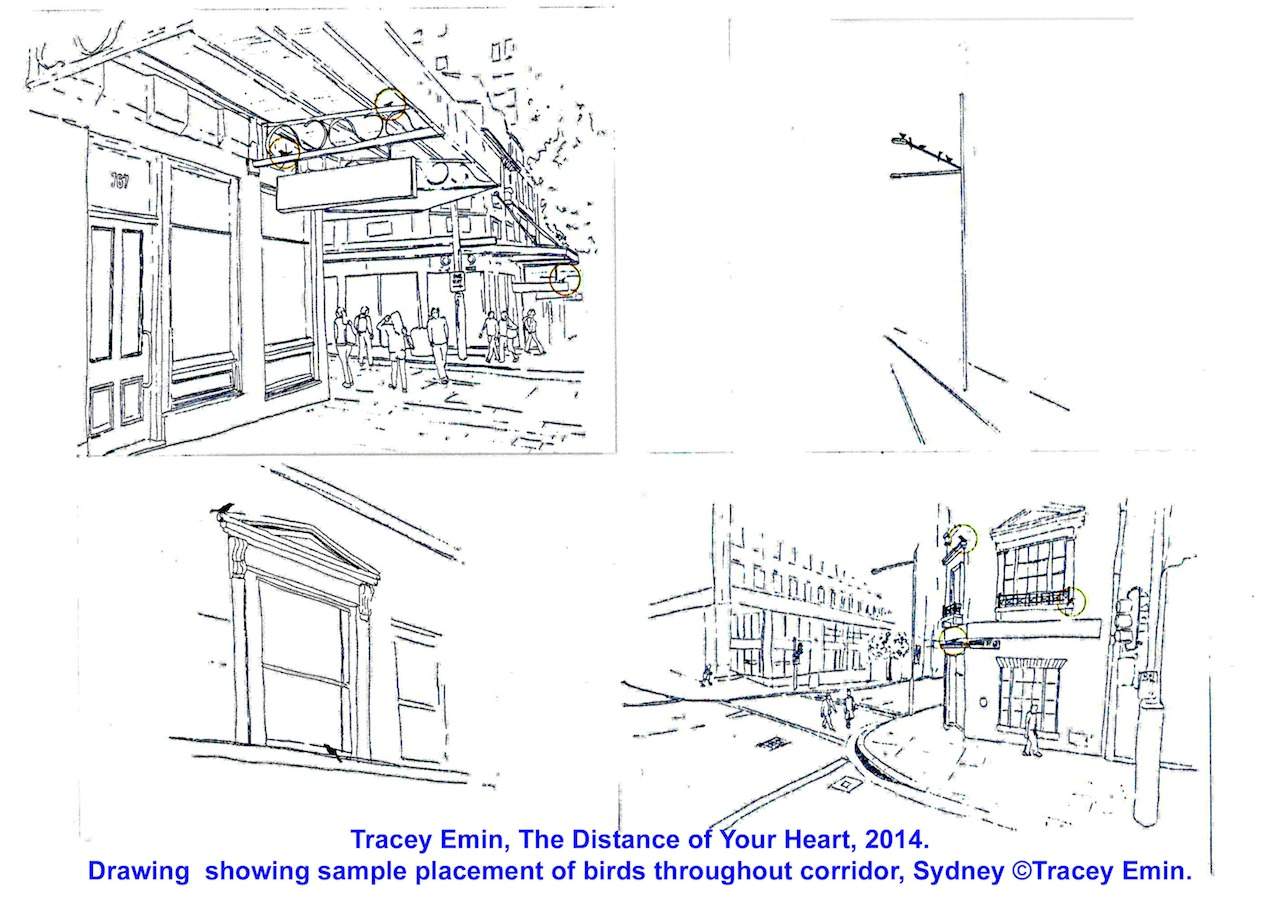 "The longest time I have ever spent [in Sydney] is two and a half months. Most days I would wake up feeling very happy and free but occasionally I would find myself feeling low and disorientated and I realised I was suffering from an overwhelming feeling of homesickness." says Emin. "As my artwork I would like to make a counter site in Sydney for the young, the old, the backpackers, the tourists and the businessmen and women; somewhere else they can have their image taken to send back to the loved ones that they miss, that conveys the feelings of distance and homesickness."

These three shining new additions to the Sydney CBD have been handpicked by a special evaluation panel (comprising Ms Flynn, city design director Bridget Smyth and four members of the city’s Public Art Advisory Panel: director of Carriageworks Lisa Havilah, professor of architecture at UNSW Richard Johnson, artist and visiting fellow at the College of Fine Arts Janet Laurence, curator of C3West for the Museum of Contemporary Art Australia Anne Loxley) after the City of Sydney's largest international public art callout to date.

With a whopping 700 entires from 25 countries to pick from, the three winners mark the first three projects for the City of Sydney's $9.3 million city centre public art plan (snuggled inside the City’s $220 million contribution to the NSW Government’s light rail project).

Lord Mayor Clover Moore noted the public art plan was a direct result of the City of Sydney's massive Sustainable Sydney 2030 consultations, Sydney Open and the new Cultural Policy. "We heard the public loud and clear say they want more public art in Sydney," said the Lord Mayor said. "The transformation of George Street with light rail and a pedestrianised boulevard gives us a once-in-a-lifetime opportunity to re-imagine our city. The artworks selected by our expert evaluation panel will cement Sydney’s reputation as a capital of culture and creativity... I have no doubt they will become iconic landmarks of our city for today and future generations."

Published on July 29, 2014 by Shannon Connellan