The ‘Moulin Rouge!’ and 'The Great Gatsby' filmmaker wasn’t going to make his Elvis Presley biopic unless he found the right star — and then came Austin Butler.

Baz Luhrmann has always had a knack for casting. As his three-decade filmography shows, he's long had a talent for plenty more — dazzling imagery, pitch-perfect needle drops, and a hyperactive and immersive vibe that makes viewers feel like they've stepped right into his movies, for starters — but his films are always immaculately cast. He had 90s teens swooning over Leonardo DiCaprio and Claire Danes. His made Elizabeth Debicki a star via The Great Gatsby. And just try to name someone who didn't want Ewan McGregor to serenade them after Moulin Rouge!. You can't; they don't exist.

Elvis, Luhrmann's biopic about the king of rock 'n' roll, is no different. Indeed, the acclaimed Australian filmmaker wouldn't have made it if he wasn't able to find the right actor for the job. And that stellar stroke of casting, enlisting Once Upon a Time in Hollywood's Austin Butler to sport the pompadour, sideburns and oh-so-many jumpsuits, has exactly the effect that Luhrmann intended. Watching Butler in the film's meticulous recreations of Presley's live performances, you instantly understand why the singer became an icon. You see what audiences in the 50s, 60s and 70s saw. Even better: you feel as thrilled and excited as they must've felt.

Charting Presley's life from his birth in Tupelo, Mississippi to his death in 1977 at the age of 42 — as told by his manager Colonel Tom Parker (Tom Hanks) — Elvis spans the details that a big-screen biography about one of entertainment's most famous names needs to. It's also made by a filmmaker with his own name recognition and sense of style. The result: an Elvis movie and a Luhrmann movie. It has the swagger of both. It mixes Presley's songs — some sung by Butler, some by the man himself, some blending the two — with hip hop. It sashays between swirling imagery and a Luhrmann-esque sensory onslaught to concerts so electrifying that you can almost smell the sweat.

It's little wonder that Elvis debuted at the Cannes Film Festival to a 12-minute standing ovation. It's also unsurprising that bringing the film back to Australia, including to the Gold Coast where it was shot, was one helluva party. During the whirlwind Aussie tour, ahead of the movie's local release on June 23, we chatted to Luhrmann about all things Elvis — spanning everything from telling more than just Presley's story to Butler's virtually fated casting, thank you, thank you very much. THE MUSIC BIOPIC ALL SHOOK UP

From Strictly Ballroom, his hit debut back in 1992, through to his 2013 adaptation of The Great Gatsby, his most recent big-screen release until now, music has been a crucial part of Luhrmann's films. Perhaps that's why Elvis feels like a movie that he was always going to make — and the style of feature, a music biopic, that was always going to pop onto his resume at some point.

Asked if it felt that way to him, Luhrmann says that he was drawn to making more than just a music biopic. "I always liked the way Shakespeare would take a historical figure and make a bigger idea," he says — and as Romeo + Juliet fans know, Luhrmann's long been a fan of the Bard.

"And I was so in love with Amadeus. I don't know how old I was when I saw that, but the thing about that film is it's called Amadeus but it's not really about Mozart. It's Salieri's story — and who the hell is Sailieri? That's the point of the movie. He was the most famous composer on the planet, and god goes and puts genius in this piglet of a person and he's very angry about it. So the film's about jealousy," Luhrmann continues.

"I wanted to use the canvas of Elvis and Colonel Tom Parker — never a Colonel, never a Tom, never a Parker — this giant, out-there character, who, you know, was a carnival barker and a sort of Svengali type. He saw this kid who had grown up in one of the few white houses in the Black community and went 'I don't know what he's doing but that's the best carnival act I've ever seen'. And I just think the spread of the life —  the 50s, 60s, 70s — if you want to explore America, what a great canvas. And through music, what a great canvas." FROM DANCING TO 'BURNING LOVE' TO DIRECTING AN ELVIS MOVIE

Thanks to a wonderful piece of trivia from Luhrmann's past, directing Elvis almost seems like it was meant to be. He says the same about Butler playing Elvis — but only Luhrmann won a dancing contest to 'Burning Love' when he was ten.

"I did. I went up to the DJ and I said 'hey mate, can you put on 'Burning Love' because it really gets going, you know?' Luhrmann recalls. "And we had the matinees at our little cinema for a while" — because, yes, Luhrmann's father Leonard ran a small-town movie theatre when he was growing up — "and I just thought he was cool".

Ask a teenage Baz about Presley, though, and his answer would've differed. Unpacking why is part of the reason he has made Elvis now. "Pretty quickly, by the time I was about 18, I was into Bowie and stuff like that, and Elvis kind of was in the background," Luhrmann says. "But I think he was always present to me, but I was also very aware that under 35, he's just kind of a Halloween costume. My kids are like, he's the funny guy in the white suit, you know?"

"Anything that is iconic, that becomes rusty — at some point something iconic must've been amazing, must've felt amazing, but it's just become ossified," Luhrmann continues. "So I've spent my life taking kind of implausibly cheesy things and trying to re-code them so that what they felt like, you can feel again."

In what quickly proves typical Luhrmann fashion, he has an anecdote to explain, one relating to one of the most memorable songs in his movies yet. "When I was doing Moulin Rouge!, we were thinking about the key love song, and I was at a piano bar in San Diego. And 'Your Song' came on. And the guy was like "it's a little bit funny…" — every cheesy bar in the world would play 'Your Song' by Elton John. But I went home with Anton [Monsted, the film's executive music supervisor, and Elvis' music supervisor as well] and we listened to the original recording. And, we realised, what an amazing song." 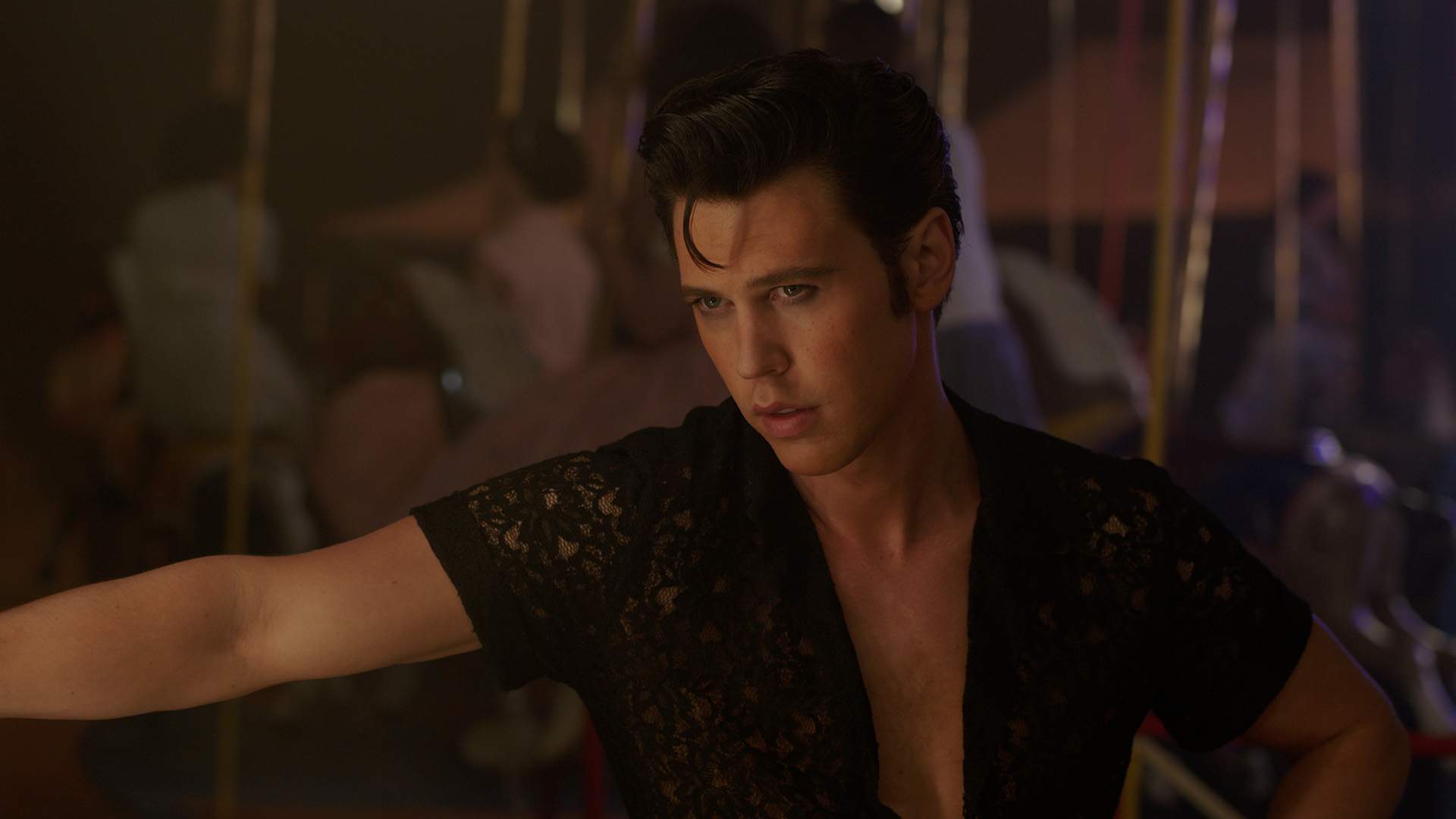 GETTING THE RIGHT ELVIS IN THE BUILDING

Call it a case of suspicious minds: if Luhrmann was going to make Elvis, he wasn't going to cast just anyone. The world is full of Elvis impersonators, which is a skill all of its own. But that wasn't what Luhrmann was looking for — and although Harry Styles was also considered, the pop star wasn't what the director was after, either.

Butler wanted the part so badly that he made and sent a video of himself singing 'Unchained Melody' before Luhrmann was even casting. "It wasn't like an audition," the filmmaker says. "He talks about it now, but I only learned recently or during the process that what happened was, he'd made another video and it wasn't good, he thought. And he had lost his mum the same year that Elvis did. So he has this nightmare and he goes down the stairs and thinks 'what I am going to do with this terror?'."

"So he goes down and he just sort of, he's in a bathrobe, and he's playing it, and shooting with an iPhone as he's singing it. And I thought, it wasn't an audition. I thought it was like spy cam or something. I said 'who is this? What is this?'."

"And then he came in, and pretty much he was Elvis from the moment he walked in," Luhrmann continues. "He just kept getting more and more Elvis, to the point where during the pandemic I had to tell him to slow down, like he was going to break himself. But I think it's like a life or death commitment for him." Strictly Ballroom had brilliantly choreographed and shot ballroom scenes. Moulin Rouge! was filled with big musical numbers, including in the eponymous Parisian establishment. The Great Gatsby boasted parties that could sit in the dictionary under 'decadence'. Luhrmann knows how to direct a spectacle — and, in Elvis, that comes via the concert scenes. Chatting about them, he credits the team effort — and Butler.

"Firstly, you've got to start with Austin, whose commitment — it was like, it's a freak situation. I mean, his casting in the role is almost a freak situation. It's like forces beyond me almost, without getting too Hammer horror. He was drawn to be in this movie, and I wasn't going to make it unless I could find someone to play it," Luhrmann notes. "Then, COVID meant that whatever he was doing, he had to do it for another year. And by then he was so Elvis."

Obviously, there's more to Elvis' centrepiece scenes than just pointing the camera at the Butler, as exceptional as he is. Luhrmann was determined to use the recreated footage to show — rather than tell — the audience what made Presley a star, and so incendiary, and why he was such a hit. Again, viewers don't just see the singer and his impact; they feel it, like they're there in that audience in the 50s, 60s and 70s.

"Working with [cinematographer] Mandy Walker and [executive music producer] Elliott Wheeler, and the music people and all that, [we were] making sure shot by shot  — making sure the look, shot by shot, it was identical in many regards," Luhrmann says. "But then you flip the coin, and you show what you didn't see in the documentaries and what you don't see in the concert footage. So it's getting the two sides to it."