Just as the winter lull is about to take hold, Vivid comes to light up Sydney and draw us out from under the covers. This year, the festival is bigger and brighter than ever with a jam-packed lineup of installations, performances and talks. With its growing popularity comes growing crowds to navigate. Never fear though, with the help of our friends at Samsung, we've put together a cheat sheet on how to see the best works without battling the hoards. We also sent photographer Cole Bennetts out with Samsung's new Galaxy S9 in hand to capture these popular lights and share some of his low light photography advice.

To get the most out of the below big installations — and the best snap on your phone — here are a few crowd-beating tricks and low light tips you should have up your sleeve. And just remember, the festival runs for over a fortnight so you don't need to squeeze everything in at once. The light projection onto the sails of the Sydney Opera House is the jewel in the crown of the Vivid festival. This year they're lit by North Coast artist Jonathan Zawada, whose series draws on images of the Australian environment. Metamathemagical celebrates the beautiful and the strange in nature, morphed into vivid neon. In the series of 23 overlapping, almost sculptural works, the natural becomes hyperreal, juxtaposed against everyday objects and recognisable Australian motifs from science, nature and culture. Zawada has also included representations of works by famous and lesser-known Australian artists.

With the Opera House as the crown jewel, it's sure to get a lot of attention. Avoid the harbourside scramble for the perfect shot, and instead, check out one of these bars to enjoy the show and get a snap from a unique vantage — just make sure to go early to snag a prime seat.

Cole's tip: If you don't have something to help steady your phone during long-exposure shots, the S9 has a great inbuilt stabilisation function. Hold your breath when you take the picture, this will make you consciously be still and help stop handshake through breathing. 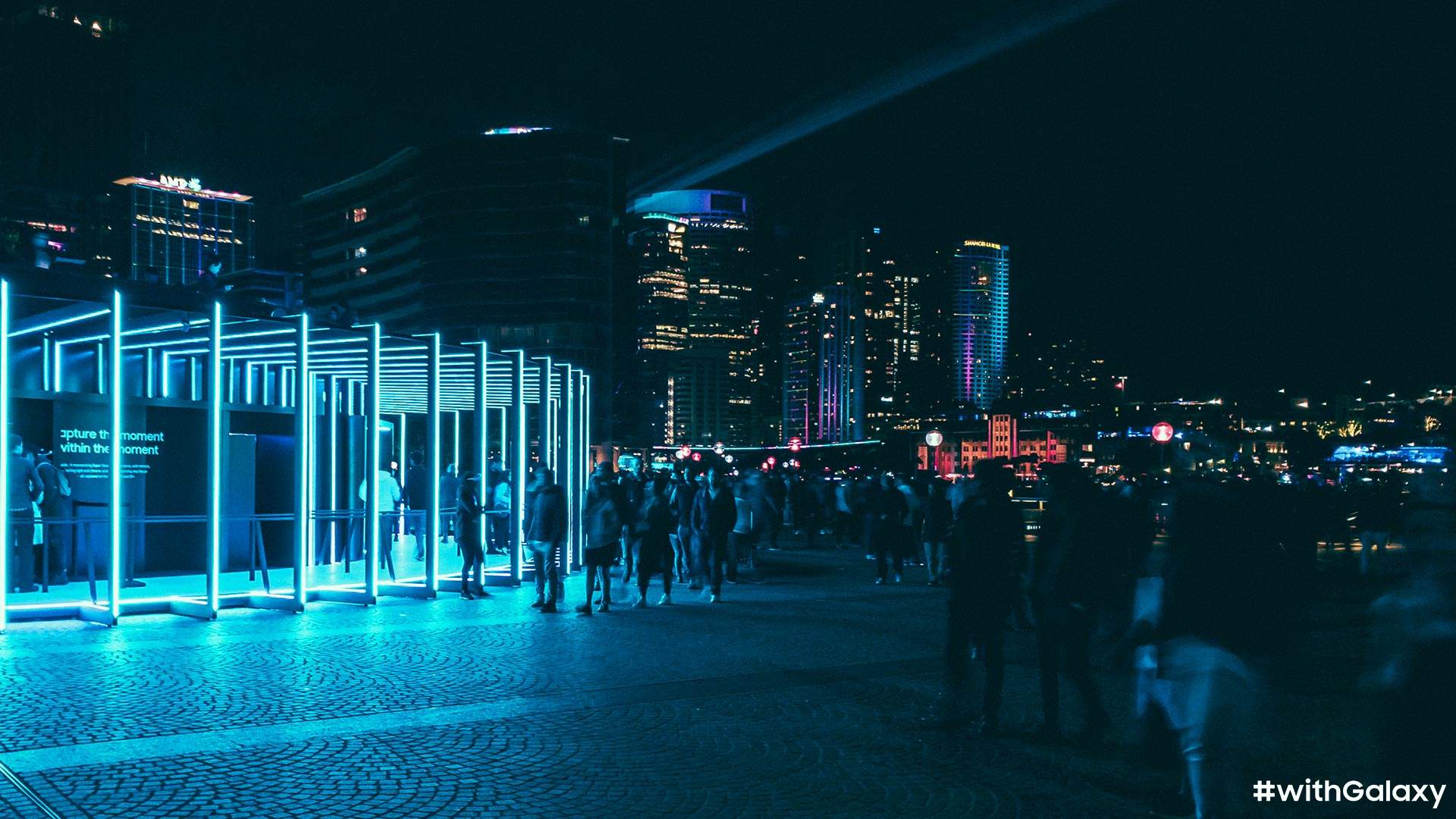 THE NIGHT. REIMAGINED. — LUNA PARK BY WAY OF THE OPERA HOUSE

If you've always found the Luna Park face just a tad bit off-putting, you can now replace it with your own. To celebrate Vivid's ten years and the release of the new Galaxy S9 and S9+ phones, Samsung has created a pretty unique experience. At the Opera House forecourt, walk through Samsung's nine-shaped installation (get it?) to play with photographic elements of light and shadow. As you make your way through, you'll be met with slow-mo experiences and the chance to create your own AR Emoji. Once you reach the centre, your face will be projected across the water where it will then become the new face of Luna Park.

With a lot of faces expected to shine across Luna Park, this is one we suggest hitting just as the lights turn on for the night — there are limited spots for the AR projection and, naturally, high demand is expected. So, get in first, create your own AR Emoji then make your way to see some hidden Vivid gems. 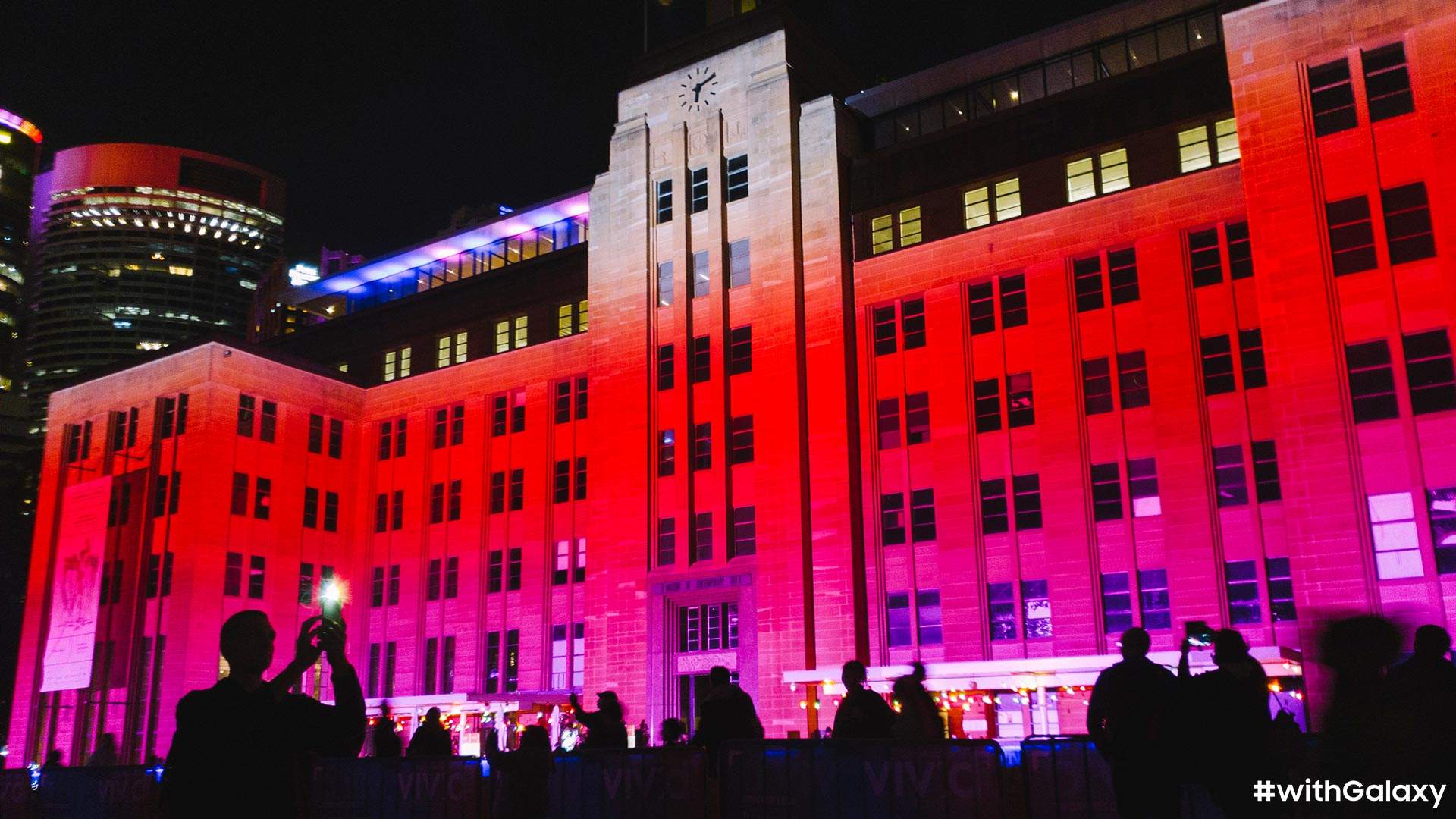 Another Vivid icon, the heritage listed façade of the Museum of Contemporary Art will go psychedelic this year. The Virtual Vibration installation combines morphing imagery and music to create an immersive sensory experience. Designed by the Spinifex Group and MCA Collection artist Jonny Niesche, the work also features a score by British electro producer, Mark Pritchard. Stand on the foreshore of Circular Quay and look up to the MCA bathed in colour, backed by an epic soundtrack.

Smart money says come during the week rather than on the weekends to see this one. Treat yourself to a Wednesday night out mid-festival, and you'll avoid the weekend hoards. Plus, after viewing the outside of the MCA, you can head inside for its Lights on Later Vivid program, which includes a glowing gin-serving pop-up bar. Childhood favourites and original bush babies, Snugglepot and Cuddlepie will take over Customs House this year to celebrate their 100th birthday. Animators Ample Projects have lent their skills to bring author May Gibb's creations from page to façade. Watch as Gibb's iconic characters appear larger than life and journey through the Australian bush projected across the historic sandstone building. Just as in the books, the Gumnut Babies make their way through the sometimes strange and unexpected world around them, encountering friend and foe along the way.

This is one for kids and big kids alike. Try to at least avoid the (young) kid crowd, and hit this one post-bedtime, just before the lights go out for the night at 11pm.

Cole's tip: At the very base level, photography is about capturing light. When taking pictures at night, look for a street light, neon sign or another interesting light source, experiment a bit and have fun. You will be surprised by the results. Wind your way through the botanic gardens on an interactive pathway, captivating both during the day and at night. While the sun's still up, Aqueous mirrors its surrounds — the sky above, the neighbouring trees, those on its path — and by night the cells of the walkway glow as you make your way along. The snaking trail illuminates with different lights and colours depending on whether you walk, run, jump or play. Created by US artist Jen Lewin, the installation has just finished a successful turn at Burning Man and is sure to be a big hit here, too.

Hot tip: the Vivid app keeps you up-to-date with how busy particular venues are. Since this installation is a surefire people-pleaser, screen the crowds via the app before you make tracks to the garden.

Beat the crowds and get the best snap of the Vivid lights on the new Samsung Galaxy S9 and S9+, designed especially for low light.