Here we pick out the works you need to see, from the awe-inspiring original members of the Terracotta Army to Cai Guo-Quiang's large-scale works made from gunpowder.

Here we pick out the works you need to see, from the awe-inspiring original members of the Terracotta Army to Cai Guo-Quiang's large-scale works made from gunpowder.

The National Gallery of Victoria has been displaying a plethora of Chinese masterpieces lately, and the opening of its new dual exhibitions — Terracotta Warriors: Guardians of Immortality and Cai Guo-Qiang: The Transient Landscape — are two more unmissable additions.

The most monumental part of the exhibition is undoubtedly the Terracotta Army: a collection of sculptures that were created for the first Emperor of China Qin Shi Huang's gigantic tomb back around 221–206 BCE but were only discovered in Shaanxi province in 1974. It's one of the 20th century's most significant archaeological finds. The NGV had displayed some of them before back in the 80s, but has managed to score eight (of the estimated 8000) terracotta warriors for its 2019 Winter Masterpieces exhibition. They're supported by a cast of two breathtaking life-size Imperial Army horses and two smaller replica bronze chariots, and complemented by a remarkable selection of gold, jade and bronze artefacts that date back a thousand years.

Finding parallels with the terracotta warriors, Cai Guo-Qiang's exhibition provides a contemporary perspective on China's culture and ancient philosophies. Across installation, exhibition design and paintings forged with gunpowder, Cai's work illuminates his sincere commitment to the idea that history and ritual can inform great contemporary art.

Below, we've picked out six artworks that highlight why this exhibition is one you have to catch — whether you live in Melbourne or interstate. It will be showing right up until October 13. From good fortune to compassion and romance, peonies have held an important significance within Chinese culture for centuries. This artwork is made up of two works, with Transience I (Peony) being a huge mound of porcelain, which has been singed with gunpowder. The second part, Transience II (Peony), is an immersive 360-degree painting where Cai Guo-Qiang showcases the peony throughout its four stages of life — from its emergence to its bloom, wilting and eventually its decay. Each colourful petal displayed across the work was created using colourful gunpowder (in a Williamstown warehouse) to scorch the silk underneath forming unique characteristics and shapes. Together, the two works explore the fragility of life and hint at the downfall of the Qin empire — it was the first dynasty of Imperial China and lasted only 14 years as advisors fought for control. Featuring 10,000 porcelain starlings, this mind-bending installation seeks to recreate the bewildering phenomenon of 'murmuration', where large flocks of birds move effortlessly in harmony — something that scientists still haven't landed on a conclusive answer for. Simultaneously, Cai's intricate work also resembles the undulating slopes of Mount Li, a culturally and spiritually significant place that was chosen by Emperor Qin Shihuang to house his giant terracotta army. Meanwhile, each of the birds in the artwork were produced in Cai's hometown of Quanzhou, which has strong traditions of crafting high-quality white porcelain. However, Cai used gunpowder to ignite his flock into a dramatic shade of black. 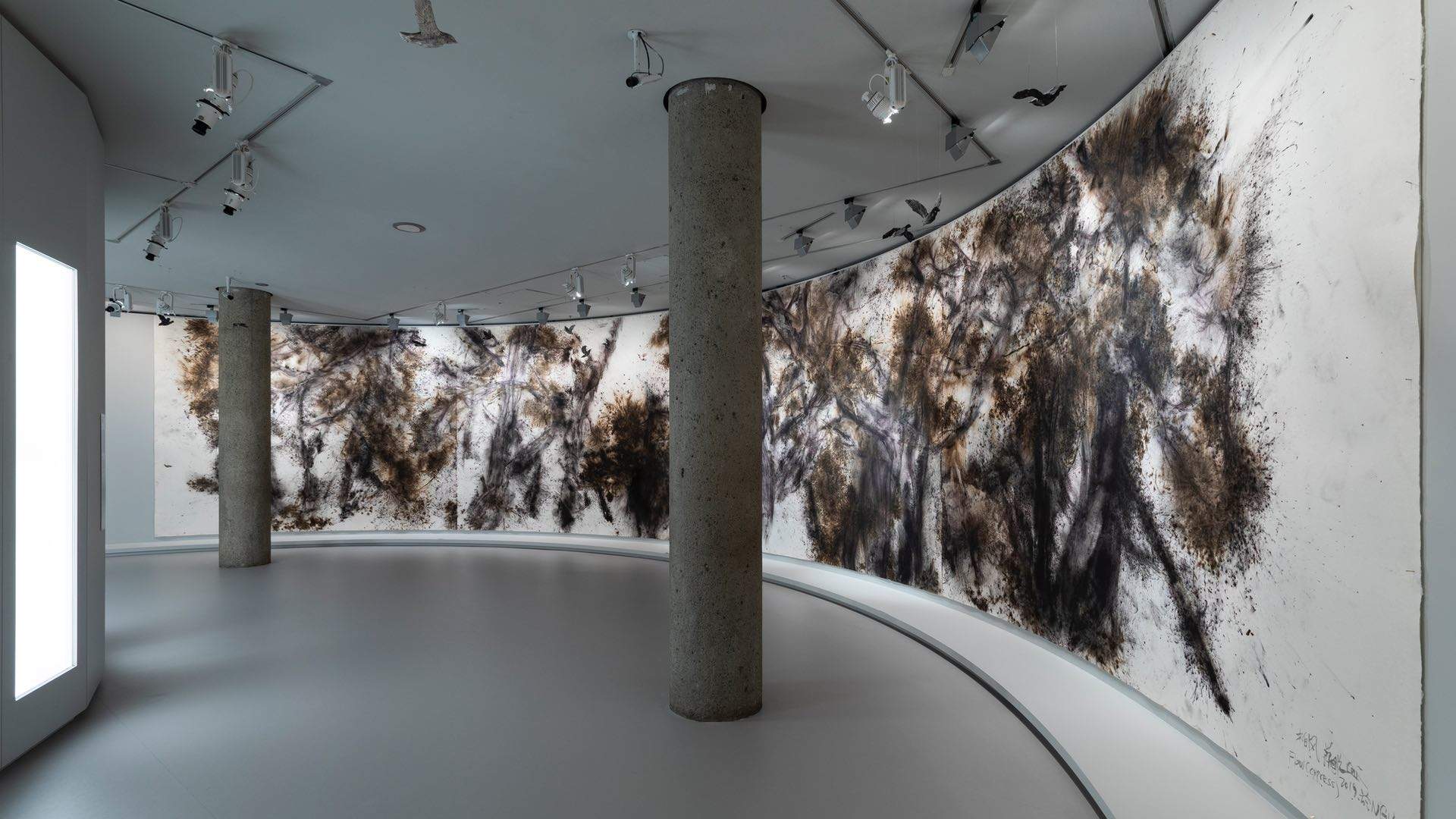 Like peonies, cypress trees have long been an important emblem in ancient Chinese history. Symbolising resilience and integrity in art and literature, this large-scale creation saw Cai draw with gunpowder and mimic what's known in Chinese as dimai, or 'veins of the earth'. According to feng shui, the Chinese study of energy forces, locations that feature distinct valleys and rivers represent the earth's most abundant settings and have been chosen throughout ancient history as the sites for tombs and other places of supreme importance. This work depicts China's Central Plains, which is considered to be the birthplace of the concepts of yin and yang, Taoism, and the starting point for 400 years of the Han Dynasty. With an estimated 8000 terracotta warriors buried at the Xi'an excavation site, so far only about 2000 have managed to be successfully removed. However, what has astounded experts is that every figure they've managed to unearth has its own unique attributes, whether that be the uniforms they're wearing, the weapons they carry or the hairstyles of the people. This fact has led many to believe that each of the warriors could actually represent a real-life person from Emperor Qin's army of the time. Discovered in one of the excavation site's enormous pits, the kneeling archers are some of the Terracotta Army's best-preserved items that have been discovered to date. Highly realistic with their armour and facial expressions crafted in stunning detail, on average, the kneeling archers stand at about 1.2-metres-tall and are considered absolute masterpieces of ancient Chinese sculpture. It's said that the craftspeople responsible for the Terracotta Warriors paid extra careful attention to the kneeling arches, which can be seen in the stitching on their shoes and the immaculately produced armour plating. The huge cache of ancient marvels didn't just include thousands of soldiers. For his journey into the afterlife, Emperor Qin decided that he'd need a host of other possessions, people and creatures to help him on his way. So far, archaeologists who remain hard at work digging through the earth have found a wealth of civilian figurines, carriages and even animals, including this remarkably preserved pair of mythical creatures. From singers and acrobats to strongmen, other findings include bronze cranes, horses and suits of armour, plus a host of buildings from his own imperial palace such as halls, stables and offices.

Terracotta Warriors: Guardians of Immortality and Cai Guo-Qiang: The Transient Landscape will both be on display at the National Gallery of Victoria, Melbourne until Sunday, October 13. Admission is $30 for adults and includes entry to both exhibitions. You can buy tickets at the gallery or in advance here.