Ten Highlights of the 22nd Biennale of Sydney 2020

Visit a heart wrenching memorial, walk through an immersive exhibition inside a tunnel and see a sarcophagus at this citywide exhibition.

It's time to hit the galleries, as 22nd Biennale of Sydney is set to return from Saturday, March 14 through Monday, June 8. Sure, three months might sound like a lot of time, but this massive biennial showcase spans over 700 artworks and 101 artists from 65 different countries — as well as several galleries across our city, from Campbelltown to Cockatoo Island.

The 2020 edition is entitled Nirin, which means 'edge' in the language of western NSW's Wiradjuri people. It is helmed by a new First Nations artistic director, famed Sydney-born, Melbourne-based interdisciplinary artist Brook Andrew. Andrew has selected an impressive lineup of artists and creatives — many of them First Nations — from around the world to exhibit at the Art Gallery of NSW, Woolloomooloo's Artspace, Campbelltown Arts Centre, Cockatoo Island, MCA and the National Art School for the exhibition's 12 weeks.

The showcase brings together artists from all over the globe, with fresh perspectives on Australia that span culture, gender and place. Expect installations, performances, sculptures, videos, paintings and drawings that examine what it means to be First Nations. Here are ten highlights that you can't miss.

Due to current concerns surrounding COVID-19, the Biennale has implemented precautionary measures at all its galleries, in line with advice from WHO and the NSW Department of Health. Venues are cleaned more frequently and hand sanitiser is readily available. It's also asking all visitors to practise good general hygiene and stay at home if they're feeling unwell. You can read its full statement and any updates over here. Teresa Margolles' mixed-media installation Untitled is one of the most powerful and heart wrenching works of the entire Biennale. The Mexican artist's work acts as a memorial to murdered women and transgender women across both Mexico and Australia. Over 70 women were murdered in Australia last year alone. Untitled compiles acts of violence and trauma from several sites in each country — with Sydney-specific sites included. Margolles collected particles from these murder scenes through sponging the area with water and collecting any particles or residue that remained.

The water collected from each site is used in the actual work, incorporated as droplets (each representing one life) that fall onto an electric copper hot plate in regular intervals. As you hear the water evaporate, it signifies the loss of a life, though every drop leaves a mark. Surrounding the installation is a blood-red butcher curtain, giving the entire scene an eerie edge. Margolles' work is a very visceral and emotive piece, with the viewer acting as witness to forgotten acts of violence. The blacked-out room screens multi-channel audio-visuals across several large televisions, while R&B, rap and other culturally-specific music plays through the speakers. Black couches invite viewers to hang around and truly immerse themselves in the exhibition. The work aims to critique western heteronormative values through the lens of the Spanish colonisation of the 15th and 16th centuries — of which all of the Collective's members identify as descendants. This powerful installation tells the repeated and ongoing story of colonial pain and adds a contemporary lens to it. The floor of the entire winding exhibition is covered in sand, making reference to the images of colonisers landing on the beaches of South America and around the world. The artists have constructed the installation as an Andean huaca – a fundamental Inca sanctuary or sacred place. 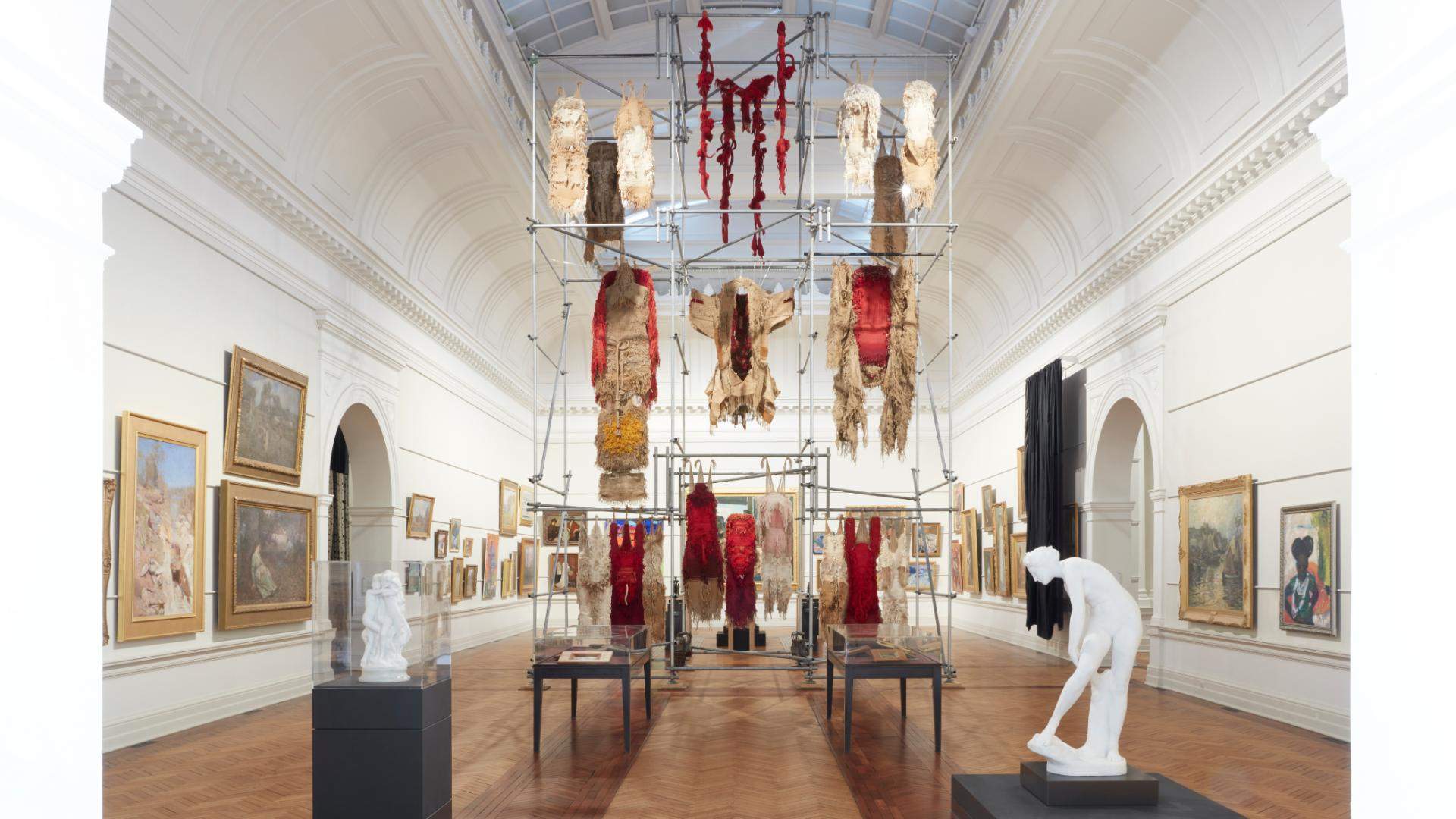 At AGNSW, the Biennale has been very appropriately integrated into the galleries on the ground floor, which primarily houses European art. This artistic decision forces the viewers to re-evaluate the history of art in Australia and the Euro-centric lens it often takes. Taking centre stage in the AGNSW Grand Courts is Retaule dels penjats (Altarpiece of the Hanged People) — a prominent 1970s work by Spanish artist Josep Grau-Garriga. His three-storey textile installation truly takes over the space, reaching to the ceiling, and works as a direct dialogue with the architecture of the gallery. His three-dimensional woven characters are a hanging memorial to tormented and suffering victims of war and martyrdom, which the viewer is forced to address — this massive installation literally cannot be missed. A stunning work by the Yolŋu digital artists of The Mulka Project, Watami Manikay (Song of the Winds) will transport viewers to another time and place. The artist collective works with digital technologies and video art. This specific project weaves the kinship of Yolŋu clans through the four winds in the form of a three-walled, floor-to-ceiling video projection that moved from sunrise to sunset — depicting lapping waves and sunny beaches. The focal point of the installation is a painted larrakitj (hollow ceremonial log), which represents the gunḏa rock that grounds each clan to its identity. It changes colour and glows in time with the mesmerising film. The cyclical work aims to express the 'countless generations of evolving Yolŋu art practice'. 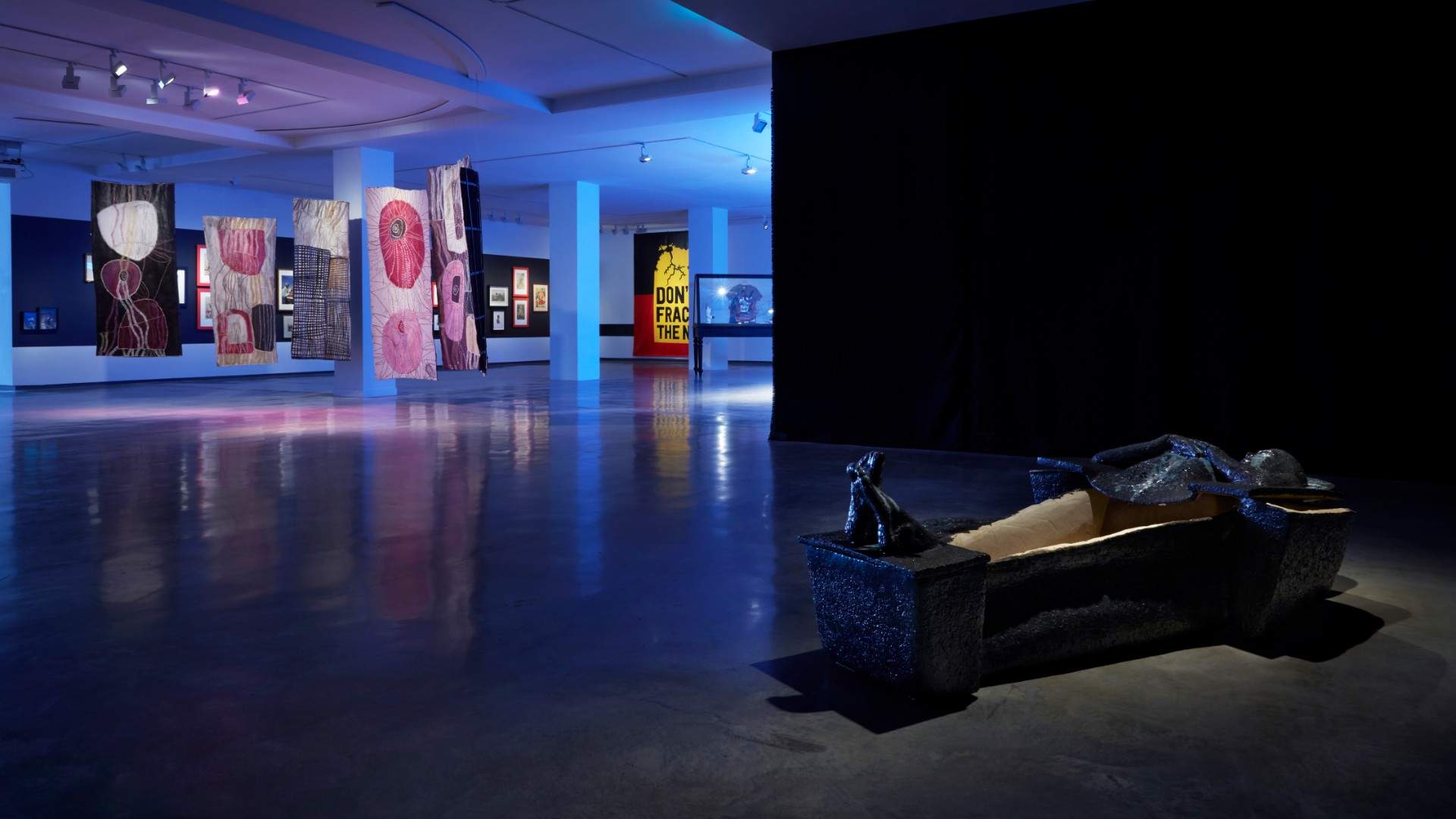 For artist Ahmed Umar's autobiographical work he created an earthenware tomb, one which is meant for him. The lid of the ancient-looking, ceramic sarcophagus includes a full body cast of Umar. It is part of a sculptural triptych that the artist created after opening up about his sexuality — and being considered 'dead' by close family members. The tomb is both a reminder of the pain of oppression and a celebration of his death. This piece is a protest against his upbringing in Sudan, and Umar (dressed in traditional Sudanese clothing) also physically protests alongside the artwork (he'll appear at various times throughout the festival). He holds a sign that reads 'Sudan executes gay people under its government endorsement'. His form of protest creates a timely and meaningful piece of art that needs to be seen. For Biennale 2020, Christchurch-based and Tongan-born artist Kulimoe'anga Stone Maka has created an expansive tapestry which nearly takes up an entire gallery floor at the Museum of Contemporary Art. The two-in-one painting re-enacts the meeting between Queen Salote of Tonga and the UK's Queen Elizabeth II, when the latter visited Tonga in 1953. The tap cloth depicts Maka's actual memory as a ten-year-old boy, with yellow barricades around the piece recalling the crowds on the day. His memory also includes seeing someone with blue eyes for the first time — which you'll notice as blue dots on the tapa cloth. The artist's technique nods to the Tongan art of ngatu 'uli (black-marked bark cloth), which has a 'material connection to his homeland'. Through his work, Maka is simultaneously telling both a personal and global story of connection.

Tongan Australian artist Latai Taumoepeau's The Last Resort depicts an all-too-real dystopia where idyllic island landscapes have literally become garbage dumps. It specifically explores the vulnerability and fragility of the Pacific Island nations' saltwater ecosystems. Performer Taliu Aloua wears brick sandals and holds an 'ike (Tongan mallet), while surrounded by a wall of glass bottle-filled sacks. A sea bed of glass lays at her feet. She repeatedly (and very loudly) smashes the bottles with her feet and mallet, and adorns broken sacks in replace of a lei around her neck. This ongoing endurance performance acts as a response to the physical and emotional (as well as geo-political) labour of Pacific Island people against the agents of climate change. Their connection to the land and the true destruction happening to it is viscerally depicted here.

Sāmoan artist Léuli Eshrāgh created a peaceful and beautiful ceremonial space for the 22nd Biennale. Re(cul)naissance honours precolonial kinship systems, using natural light to shun western religious beliefs of bringing 'light' to colonised nations; instead, this work fully embraces Indigenous practices that are 'considered deviant by western missionaries'. The work specifically interacts with Sāmoan and other Indigenous concepts, namely 'mālamalama — the process of enlightenment through paying attention to symbiotic pō (the origin of the universe), lagi (multiple heavens) and other kin animals. The space and video performance openly explores multiple genders and sexualities in an engaging way that offers up a future 'free of colonial shame'. INTO ALL THAT IS HERE WITH THE TWO COCKATOO TOO BY LAURE PROUVOST, COCKATOO ISLAND

French artist Laure Prouvost's Biennale artwork is potentially the most unsettling of the bunch. Into All That Is Here With The Two Cockatoo Too is a site-specific work that uses the entirety of the island's Dog Leg Tunnel. Within the dark tunnel, Prouvost provides an immersive experience that touches many senses and mimics the 'daily flow of images and texts that assail us'. Think of it as content overload, while trying to traverse a house of horrors. You'll hear whispers throughout the tunnel, and one of those voices may just be the artist herself — who at times will be lurking in the shadows and encouraging you to sit with her. Further in, the tunnel begins to 'wind' as constructed black curtains make you weave in-and-out, which starts to feel endless. Needless to say, you better not be afraid of the dark for this one.