The Best Advice Ever: Josh Niland on Collaboration in the Kitchen

We chatted to the peerless Josh Niland about the art of collaboration in the kitchen, teamwork and the best advice he's ever received.

"Careful, you've got about seven cameras on you," Josh Niland quips to one of his chefs on a quiet Monday evening. The Saint Peter cook in question offers a nervous smile, but isn't distracted from his meticulous work: chargrilling twenty identical King George whiting over coal.

The butterflied fish are served with a nostalgic play on hundreds-and-thousands — a rich butter sauce with bright chives, finger lime and popping orange tapioca pearls. "Make sure you start at the tail end, so the fish continues to cook evenly," Niland recommends to the group, who have been invited to preview his pop-up collaboration with whisky-maker Talisker.

By all accounts, things are going swimmingly for Niland: he was the only Australian chef to be awarded a spot in this year's Best Chef Awards, also nabbing the Best Chef Innovation Award for his nose-to-tail approach to the ocean's finest. Back in 2020, he also won the James Beard Book of the Year Award for his magnum opus, The Whole Fish Cookbook.

But the peerless seafood chef rarely dabbles in branded collaborations. So, we took the time to chat about the art of collaboration in the kitchen, teamwork and the best advice he's ever received. 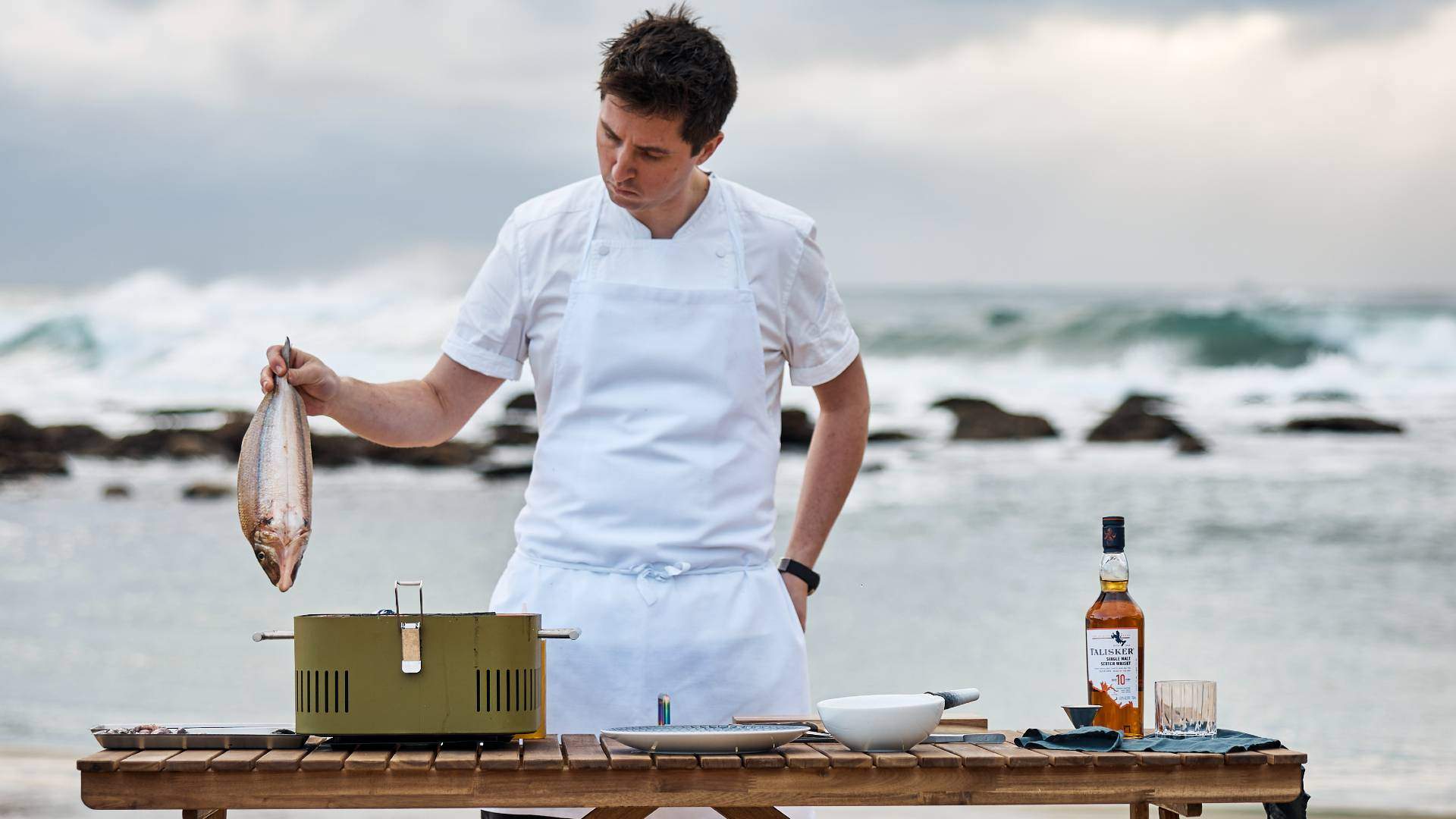 How do you go about choosing the right partners for your venues?

"The initial engagement with Talisker was fascinating to me — there are very few metrics around for what you can do with fish and whisky. It's a very robust alcohol to weave into a fish dish. But, I like being pushed into the corner and told 'this is all you're allowed to do'.

It's also about quality [when it comes to partnerships]. We're making a decision based on quality and the underlying ethics of the business — ensuring that they're working responsibly in terms of the procurement of their ingredients and how they work within the company. We have to do our due diligence and make sure that both parties are aligned."

Speaking of quality products, I assume there were a few whisky tastings involved in the process?

"There were definitely some... should we say 'quality checks' — not just from me, but also from my chef Ben, who gave it a good taste." 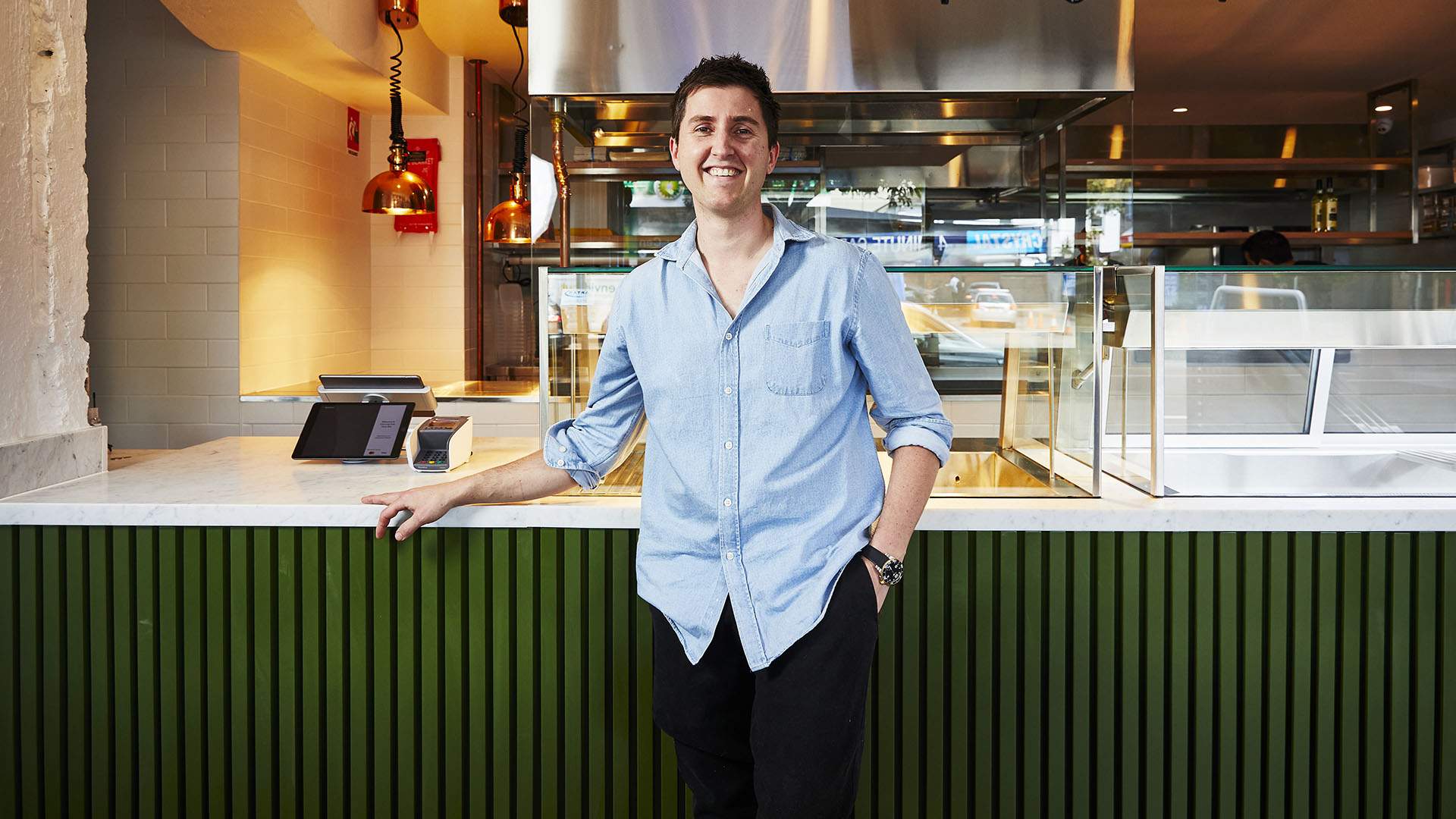 How do you approach collaborating with Julie, your wife and co-owner, particularly if you disagree?

"I feel like Julie and I are obviously very aligned. We've been married nearly 13 years so we've had meals together and experiences together, and that polishes the edges of what we feel we want to be doing as professionals.

But that continually changes all the time — the way we were pre-COVID is very different to the way we are now. And I think what you'll see from Saint Peter in the coming years will be starkly different to what you see now — that's just signs of a good, evolving business.

Although there are moments of friction, above all it just comes down to trust — knowing that, if it doesn't seem 100% right because it's not the same as what we did at one time, then the trust is there that we're making the best decision. We trust that we're not going to steer the ship astray, and we rely a lot on the team around us to help us make those decisions — especially significant ones.

We're very fortunate to be surrounded by some really extraordinary people in our management team and also the young chefs and front of house professionals." 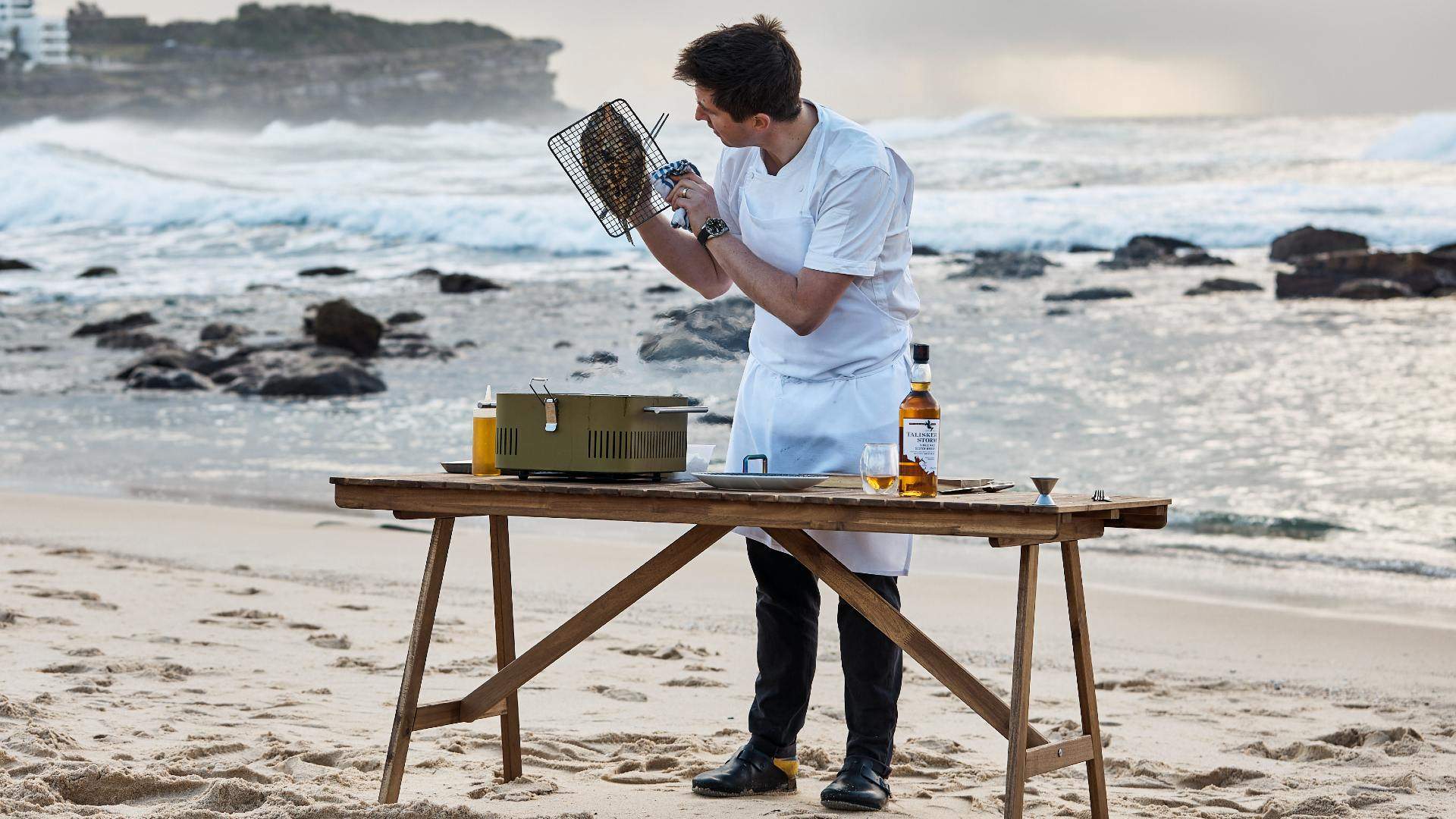 How do you collaborate with your chefs at Saint Peter?

"It's been a learning experience the last two years, how to be a better coach as opposed to captain. We're now starting to see the benefits of mentorship and looking after the guys really well, and they're starting to feel more confident with what they can offer to the team.

It's been a nice 12 months, even though it's been challenging — it's been super rewarding. You can go home at 6pm and put the kids to bed, and know that everyone is 100% behind you and they all believe in the one thing and they're all driving towards the same product.

There are moments where you're like 'I wish I could've had my hands on that', but I've changed significantly in the last six years. I've gone from standing on the stove and going 'nobody touch anything, I'm doing it' to now going 'can somebody else do this cause I want to show you how to do it' and then people are thriving and they're showing the next people.

It's all a maturity thing and a learning thing — I was 26 when we opened Saint Peter. I'm getting pulled in every direction personally and professionally so I'm just making sure that at its heart everyone understands what we're doing and why we're doing it." Obviously finding consistent and reliable producers plays a huge role in what you do. How do you approach managing those relationships?

That's why when people always ask, 'why can't you leave dishes on the menu, why can't you just stop changing the menu?' It's not for not trying! It's because we always have to work like that. When you're a fish business you have to keep changing and evolving.

We now have four teams all working on fish that is not always consistent and that is not reliable, so we rely on [the team] to remain flexible and adaptable and courageous enough to keep turning up.

Finding the fishers that we've found — particularly Walkers Seafood in Mooloolaba in Queensland and Bruce Collis at Corner Inlet in Victoria — I would put that down to me having a relationship with Steve Hodges at Fish Face. So you've got Steve Hodges, Neil Perry, John Susman, Greg Doyle and Peter Doyle from the generation that's just gone through and they have carved out a pathway for our next generation and given us the ability to go direct to fisherman.

But you have to be ready to pick up the phone and talk for an hour — about fish. The extension of that conversation is really powerful for the customer to hear about, because then there's a registering and appreciation for the price point, because they see the value of someone going out and intentionally catching something for their dinner." 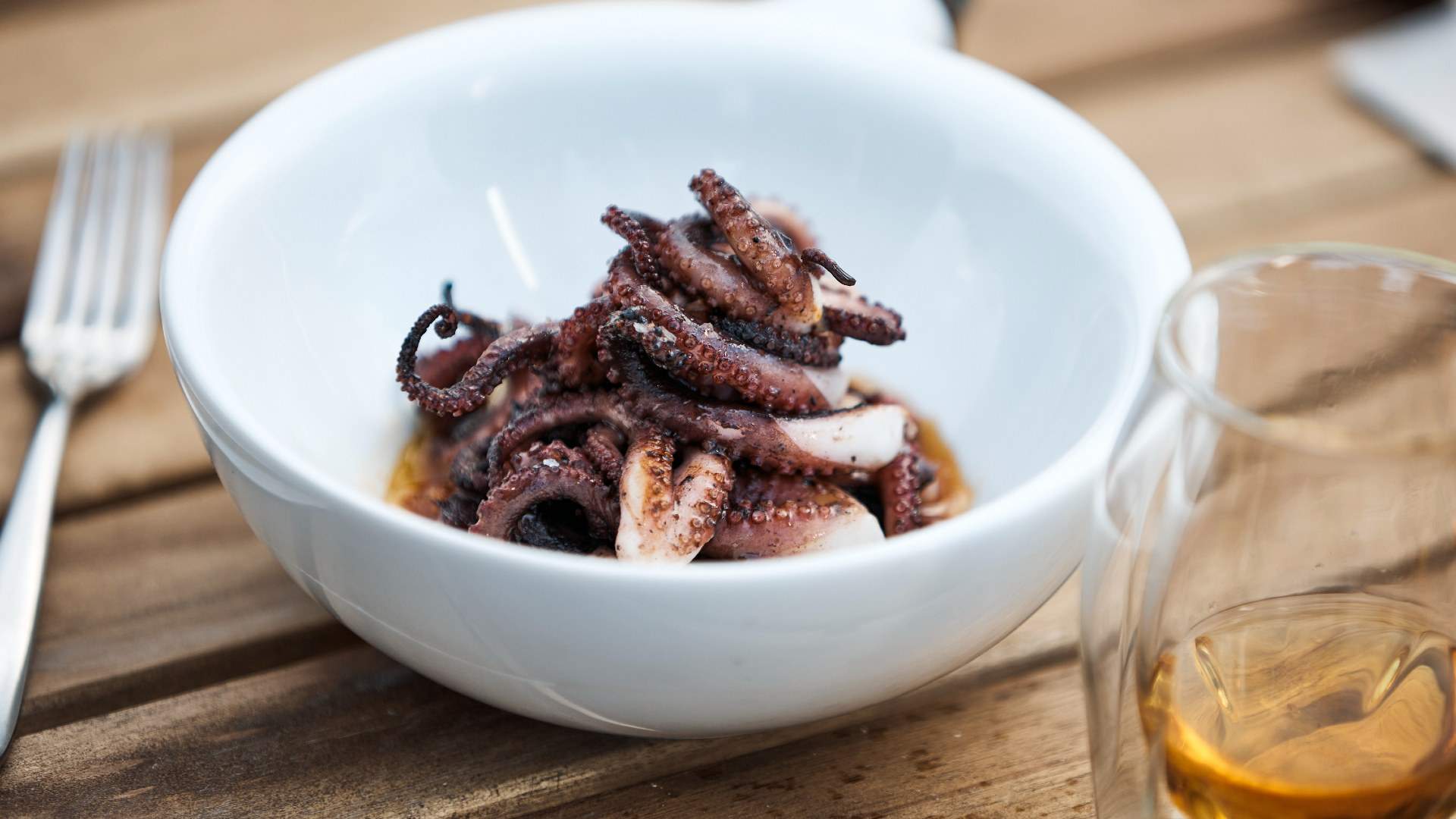 What's the best advice you've ever been given?

"'Treat everyday as a sprint, but life is a marathon.' Simon Marnie from ABC Radio told me that, he's a friend from a long, long time ago. I had just got back from overseas and he could see all the layers of places I wanted to go and people I wanted to meet in my eyes, but he kind of slapped me over the head and said 'listen'.

Even Luke Magen said to me as a second-year apprentice that 'Rome wasn't built in a day'. That came at a really poignant time in my cooking, I had been there for about eight months and I was really frustrated that I hadn't been 'seen' yet, because you were part of a 35-chef system. It really bothered me.

So I went and I did a trial at Balzac with Matthew Kemp and he offered me a job. And then I got back to work the next day, not to have the conversation, but to continue to think about if I wanted the job. Luke came up to me and said 'I heard you had a conversation with Matt Kemp.' And I realised that the kid from Maitland didn't realise how small Sydney was.

Luke said, 'Rome wasn't built in a day, you need to be patient.' You gotta — not necessarily earn your stripes — but understand that you can't have everything you want right now, but with a bit of application and intentionality and telling us that that's what you want, then let's get on with it. And then from there I got to really be exposed to a lot more."

Josh Niland's Taste of Talisker will pop up in Sydney's North Head between Friday, October 21–Saturday, October 22. You can purchase tickets to either the three-course menu or the Made by the Sea whisky experience via Moshtix.