An ex-Quay chef is in the kitchen whipping up the city's best take on traditional pub fare.

An ex-Quay chef is in the kitchen whipping up the city's best take on traditional pub fare.

The team behind some of Sydney's recent major pub revamps is at it again. Just a few months after relaunching Waterloo's George Hotel and the Duke on Enmore Road, James Wirth, Michael Delany and Joel Amos are doing the same to Woolloomooloo's Old Fitz.

The Dowling Street stalwart reopened late last week with a fresh coat of paint, British pub eats by a star chef and natural wines aplenty. But, as Wirth is quick to point out, it's still the same old pub at heart. "We wanted to keep the spirit of the place alive," says Wirth. "So we kept the front bar as is, apart from replacing the carpet and updating the furniture."

Elsewhere, the upstairs dining room now has a "drinking den meets old man study" vibe and the courtyard has been transformed into a leafy oasis with plenty of group seating. 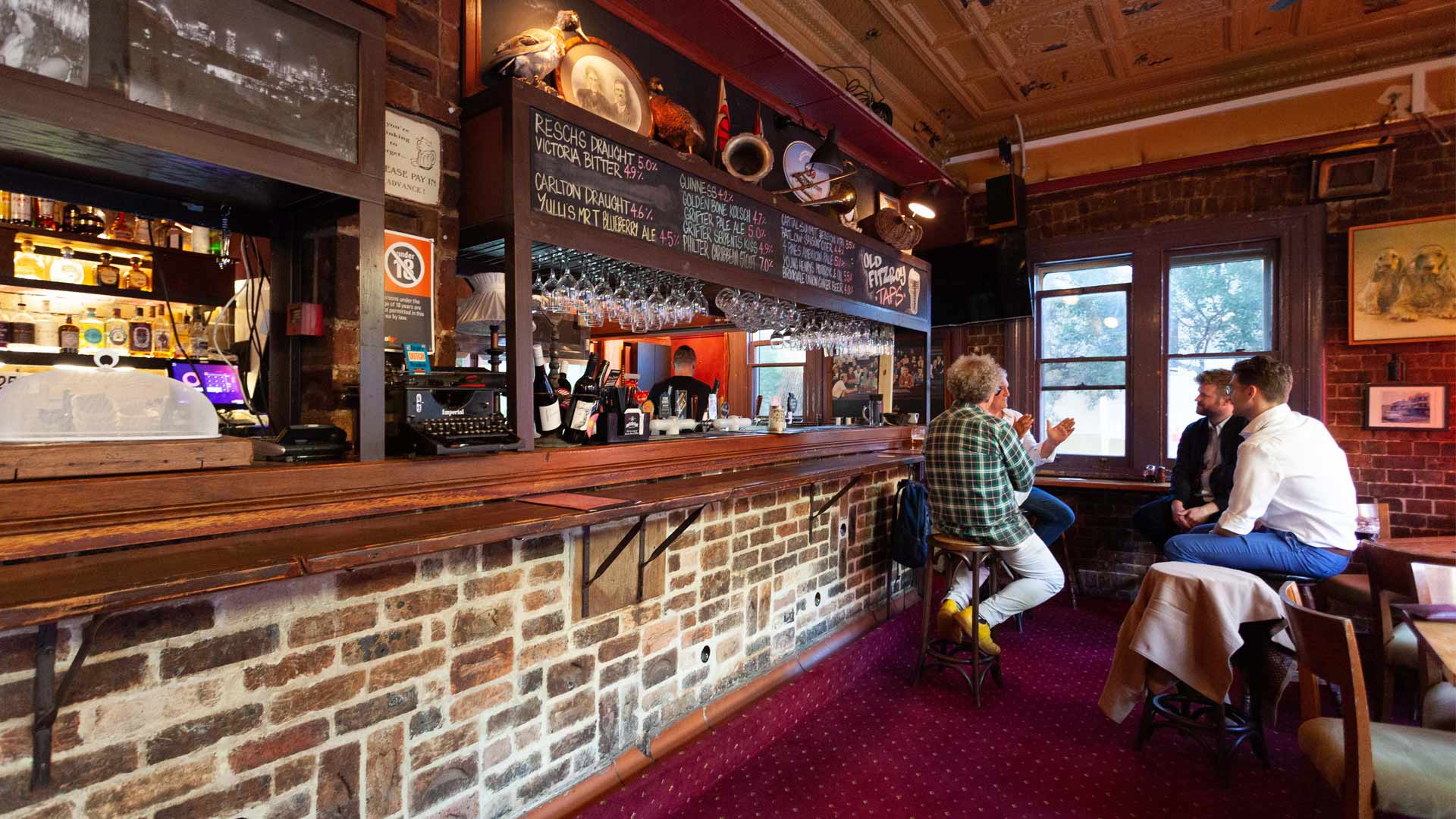 In the kitchen, Head Chef Nicholas Hill (who's previously worked at Sydney fine diners Sepia and Quay, as well as the lauded Ledbury in London) is dishing up the city's best take on traditional pub food, with a strong focus on nose-to-tail cooking.

The succinct menu, which varies slightly at lunch and dinner, includes a scotch egg with pickles, a rissole sandwich with beetroot and cheddar and — Wirth's personal favourite — the raw beef on dripping toast. Pub stables, including schnitzels, steak, and fish and chips (with mushy peas) make the cut, too.

Then there are the blackboard specials, which change daily. When Concrete Playground visited, highlights included a pig trotter schnitzel sandwich and a terrine of the day made with chicken liver and pine mushroom. A daily pie for two, most recently with veal neck and pig trotter, has been making the rounds on Instagram, too.

Another new and popular Old Fitz dish that's already made its mark on the 'gram is the hot chip butty. It's a DIY sandwich with white bread, golden chips, lots of butter and optional sauce, including the aforementioned drippings or curry. On the drinks side of things, Amos (founder of online and now-IRL wine retailer Drnks) has, of course, brought a natural-wine spin to the pub, but it's not strictly so. "We have a regularly changing wine specials board, that'll focus on two or three bottles from independent producers," says Wirth. "But you can still come in for a sauv blanc before the theatre, too."

Speaking of the venue's attached Old Fitz Theatre, that hasn't changed one bit, but now you can get a bottle of orange wine and a really good feed before or after.

As well as the wine, there's a brand new cocktail menu, featuring the bars signature Pimm's cup and a black velvet, which is an unusual combo of a stout and sparkling wine. Other concoctions on the list include the Blackberry Bramble (gin, blackberry liqueur and lemon juice), the Penicillin (two types of scotch, honey and ginger syrups and lemon juice) and a G&T with earl grey syrup. Beer is also in the limelight with the bar's 21 taps offering a mix of Aussie pub standards alongside local craft from the likes of Grifter and Yulli's Brews.

The Old Fitz is now open at 129 Dowling Street, Woolloomooloo. Opening hours are Monday through Saturday from 11am–midnight and Sunday 11am-10pm.