A Road Tripper's Guide to the Far South Coast

If your ultimate holiday involves a beach dedicated to you — and only you — then make the Far South Coast your next destination. This wild stretch of shoreline, beginning at Moruya in the north and ending at the Victorian border, is so far from both Sydney and Melbourne it can easily be forgotten. Here you'll find some of Australia's most pristine beaches, hidden away at the end of long, winding dirt roads and protected by national parks. And in between beach days, you can visit 19th-century lighthouses, cruise deep natural harbours, sample award-winning oysters and snorkel with fur seals. If those aren't reasons enough to book your night in the Far South Coast, we've listed a few more below.

From coastal getaways to outback adventures, Australia is home to a wealth of places to explore. Every trip away offers the chance to not only reconnect and recharge, but also to support the communities that have been affected by bushfires. Your visit plays an important role in Australia's recovery, which is why we've partnered with Tourism Australia to help you plan your next Holiday Here This Year.

Some of the places mentioned below may still be closed due to COVID-19 restrictions. Please check websites before making any plans. It's a long drive to the Far South Coast if you're travelling from Sydney. Prepare for a seven-hour drive south, or a 70-minute drive from Merimbula Airport if you've chosen to fly there. Make your first stop Green Cape lookout, where you'll find a lighthouse surrounded by wilderness, perched on Disaster Bay's rocky northern peninsula. Forget mobile coverage. Step into the 19th century in the former keeper's cottages — which have been turned into cosy accommodation, with classic wooden furniture, claw foot baths, open fires and shady verandahs. Between May and December, you may even spot whales from the lookout point. But if you don't spot one, there's plenty of other wildlife to look out for, including fur seals, dolphins, albatrosses, gannets and sea eagles. 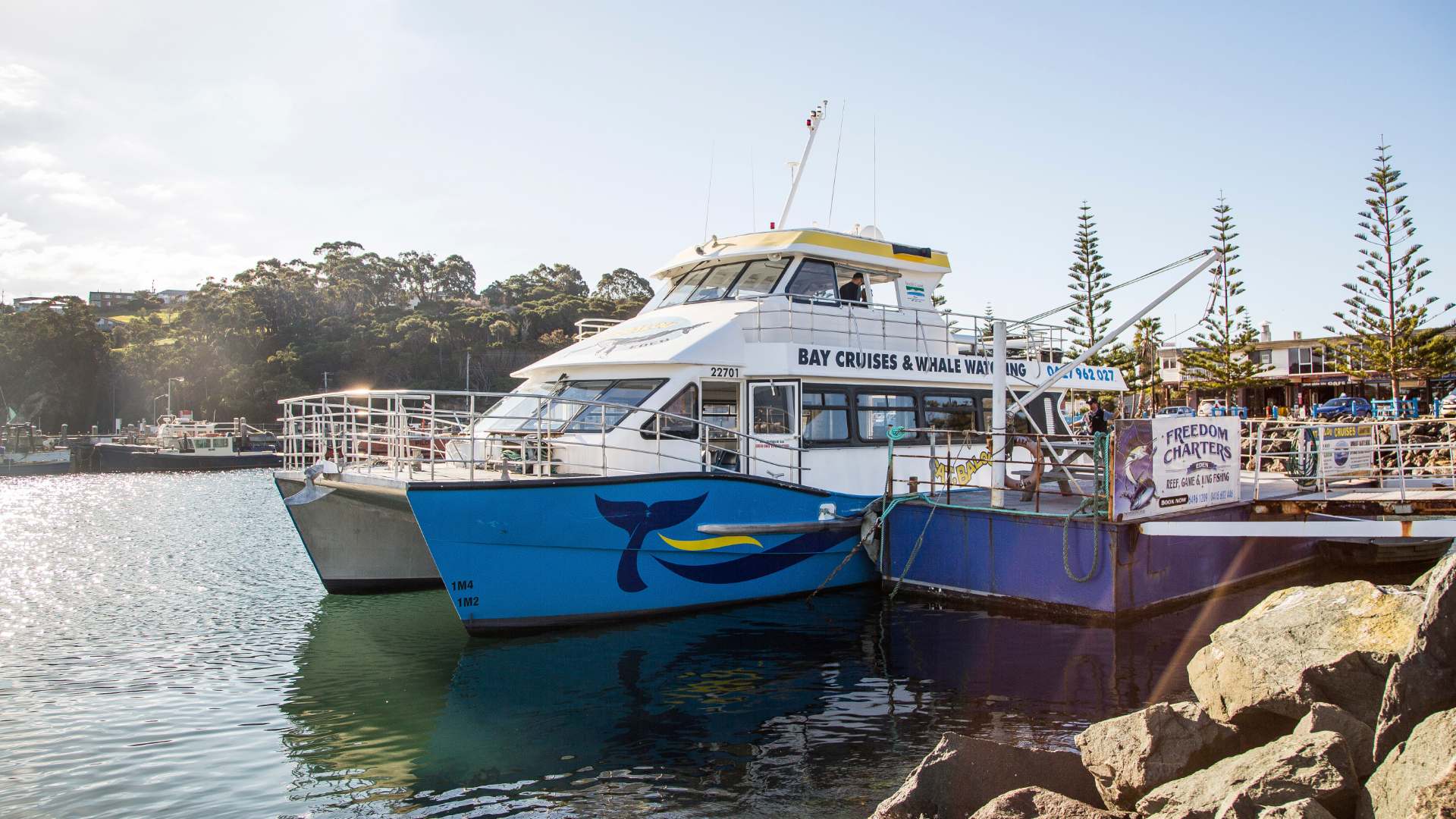 Fifty minutes north of Green Cape is the 3000-person settlement of Eden, which spreads over undulating cliff tops on the shores of one of the deepest natural harbours in the world. Formerly a whaling capital, Eden is now better known for whale watching. Cat Balou Cruises runs ocean-going adventures from the main wharf. During whale season, you could be spotting as many as 70 in a day. Between January and April, you can spot dolphins and seals, too. LEARN ABOUT THE HISTORY OF KILLER WHALES IN EDEN

To know about the history of Eden's relationship with the mighty whale, make sure you visit the Eden Killer Whale Museum. It's $12 entry for adults, and you'll get to explore permanent exhibitions that relate the story of Old Tom — an orca known to whalers in the port of Eden during the 1930s — and others that look at the continuing use of the port for tourism and as a food source. Hungry? Head to the Great Southern Inn afterwards. It's self-dubbed "that nice pub on the coast", and the seafood here is locally caught and served unpretentiously with salad and chips. Also keeping matters simple is Sprout Cafe, with its fresh, pesticide-free produce. Slip into the sunny courtyard for a toasted ciabatta with house-made salmon pate and local salmon gravlax. Or, down the road at Eden Smokehouse, there's smoked-on-the-spot rainbow trout, eel and hoki. 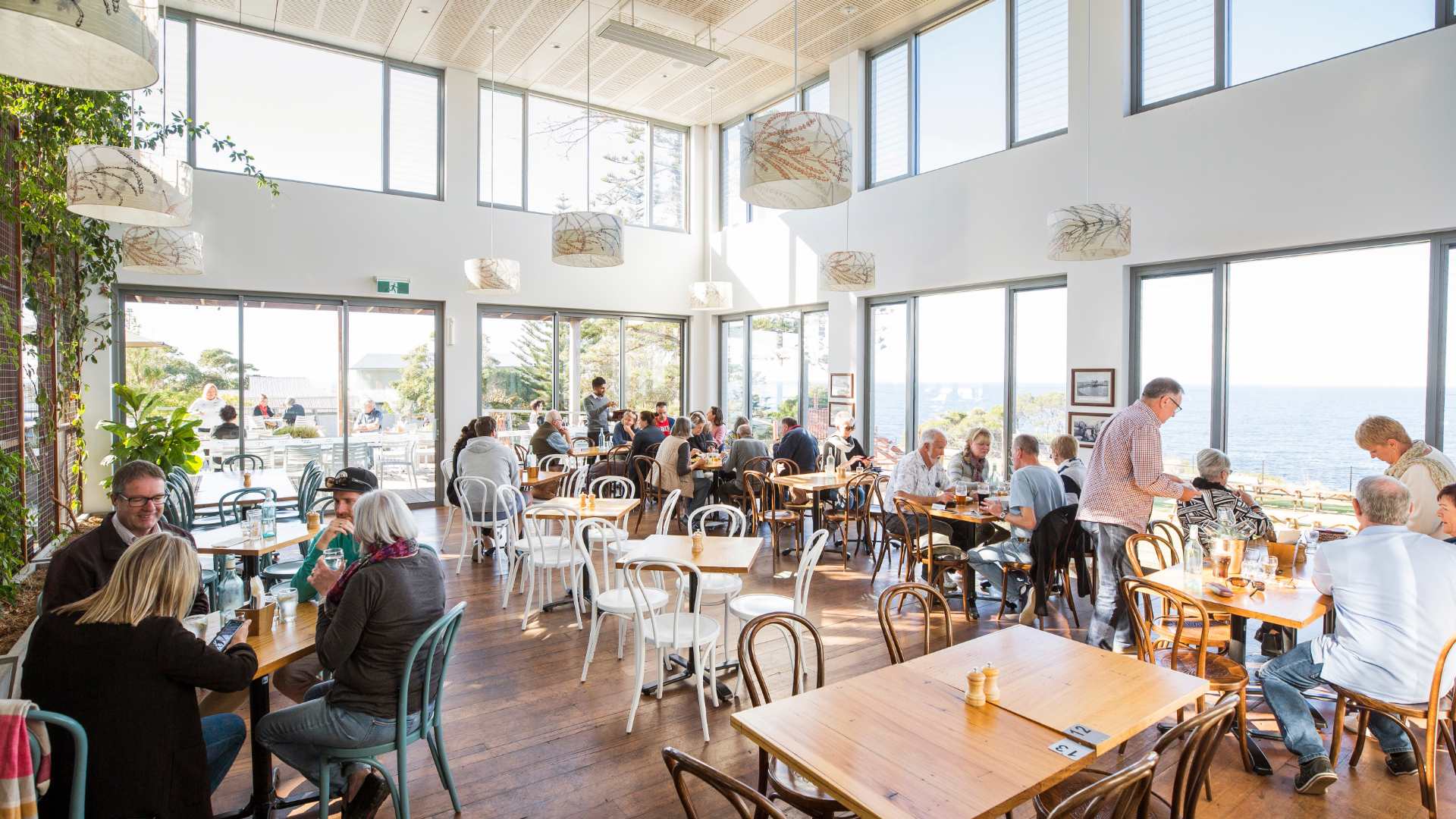 Make your next stop the home of the best bivalves in Australia, if not the planet: Tathra Oysters. They've won 180 awards and are Neil Perry's favourite, mainly because they grow in pristine Nelsons Lake, surrounded by national park. What's more, the Rodeley family have been running this oyster haven since the 1980s. And the oysters taste even better eaten from Tathra's dramatic headland. Head to Tathra Hotel to sample a few. The traditional country pub has been a beacon for locals for 100 years and the family friendly establishment has all the pub classics, like schnitties and steaks, as well as a platter of oysters served natural, Asian-inspired or kilpatrick. Order a dozen and wash them back with a tap beer made at the onsite craft brewery, Humpback Brewery. In Bermagui, you can seek out a rock formation that's thought to be 500 million years old. It's majestic, and has a curved shape that you can't help liken to a graceful horse's head. You can see it from an elevated walking track between Camel Rock and Murunna Point at Wallaga Lake. Allow for an hour to complete the 1.5-kilometre track, and if you choose to get up close to the rock be aware that it's not an easy task, and should only be attempted during low tide. Rise and shine, your next adventure is Montague Island, a magnificent nature reserve nine kilometres off shore. It hosts the biggest fur seal colony in New South Wales, which attracts as many as 2500 seasonal residents, as well as over 90 bird species and a 12,000-strong little penguin colony. The best time to visit if you want a good chance of seeing these animals is during spring, but from late winter the seal colony on the island starts to grow and you're likely to spot penguins on an evening walk around the island. For a more organised tour, Lighthouse Charters offers a variety of options, including day trips with whale watching, snorkelling with fur seals and little penguin watching. To make the most of your trip, book an overnight stay. Montague Island's Assistant Lighthouse Keeper's Cottage sleeps seven people across three bedrooms, and you'll more or less have the island to yourself. Before leaving Narooma, grab an antipasto grazing box from Mr Bold Catering Co, which comes packed with local cheeses, chutneys, cured meats and fruit. SEE MORUYA'S BEAUTY FROM THE SKIES

Drive 40 minutes north to the riverside town of Moruya, where you can level up your trip with a 15-minute flight taking in views of unspoilt beaches directly below, and mountains to the west. You'll be in prime position to spot whales in the Batemans Marine Park, too. It's $188 for a scenic flight with Moruya Sea Planes, and if you want to spend more time in the skies there are flights around Montague Island, Tross Falls and special occasion experiences where you'll break up the in-air fun with a picnic on a secluded beach. Twenty-two kilometres east of Bega is a wilderness camp surrounded by spotted gum trees, overlooking Tanja Lagoon. Expect to be greeted by kangaroos before being shown to a luxury safari tent, one of only four, on the edge of Mimosa Rocks National Park. For active types, there is a chance to go paddling and bushwalking to secluded beaches. For lazy bones, options include lolling about in the handcrafted bed followed by moonlit soaks in a giant bathtub, which looks out to the surrounding trees through a big picture window. Expect to pay upwards of $600 per two-night stay, and plan your trip well in advance as this place tends to book out quickly.