The Ten Best Lighthouses To Visit Near Sydney

Gone are the days when lighthouses were the domain of lonesome keepers, spending long nights keeping an eye on kerosene lamps and braving the fog and the foam. These days, automation does all the work. But despite that, it's hard to spend time at one without feeling like you're going back in time 100 years, when adventuring by ship was an extraordinarily risky business. Since 1622, more than 8000 ships have wrecked on the Australian coast, yet only about 2000 have been found. Visit these ten lighthouses in and around Sydney to travel back in time a little, take in some dazzling views, visit some beautiful beaches and perhaps even sleepover in an original light keeper's cottage. The Norah Head Lighthouse has been saving ships from coming a cropper on the Central Coast's jagged shoreline since 1903. Perched on the headland north of The Entrance and south of Budgewoi, it affords sweeping views in both directions. To go inside, book a tour — they run multiple times a day, seven days a week. For some sand and surf, follow the steps down to Lighthouse Beach. Not keen on going anywhere? Stay the night in one of two old-fashioned cottages, which have been turned into public accommodation. Built 91 metres above sea level, at the far end of Palm Beach — and Sydney's northernmost point, mind you — Barranjoey Lighthouse gives you 360 degree views of the Central Coast, Broken Bay and Ku-ring-gai Chase National Park. The only way to get there is on foot, and the most popular route is the main track, a gentle, one-kilometre climb. More adventurous types should take on the Smugglers Track, a shorter, steeper scramble, following a trail built in 1850 to keep an eye out for waterborne smugglers. Afterwards, explore the area — stop by The Boathouse for a seafood platter and champagne, or jump on a ferry to Ettalong for a Central Coast adventure. Grotto Point Lighthouse at Dobroyd Head is definitely the cutest lighthouse on the list. It looks a bit like a make-believe castle, built for a grumpy dwarf. The creative brains behind the design was one Maurice Festu, who was actually a sailor, rather than an architect. His plans were put into action in 1910 and the lighthouse is still active today, helping boats to find their way across Middle Harbour, and shining as far north as Manly. You can drive to Cutler Road car park and walk 500 metres, but it's much more fun to get to it via the Manly Scenic Walkway. 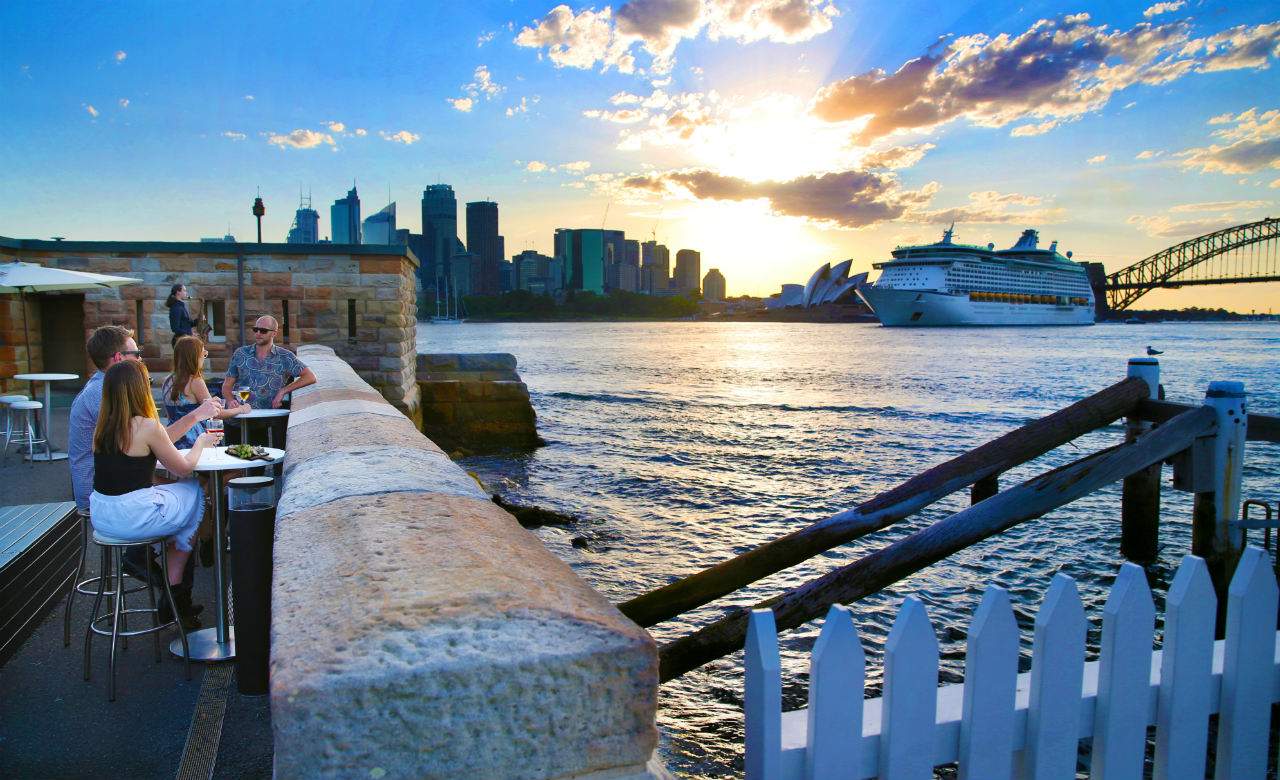 Found smack bang in the middle of Sydney Harbour, Fort Denison has been lighting the way for Sydney-bound ships for over 100 years. On the island, you'll also find the Martello Tower, which was built by light crowns for defence purposes 50 years before that, and is the only one of its kind in Australia. If you're going to spend New Year's Eve at a lighthouse, this is the one to go for — the Harbour Bridge views are epic. Any other day, you can drop into the on-site restaurant for a casual meal or take a tour. Captain Cook Ferries run to Fort Denison seven days a week between 10.30am and 4pm. There's probably no better place in Sydney to clear your head — and get an idea of just how huge Sydney Harbour is — than Hornby Lighthouse at South Head. Standing beside its candy-cane coloured stripes you can see all the way, everywhere; look across north to Middle Harbour and the steep cliffs of North Head, west across Sydney Harbour, and the water spilling into the Tasman Sea in-between. Hornby was built in 1858, a year after the wreck of the Dunbar killed 121 people, leaving one miraculous survivor by the name of James Johnson, who was tossed against the cliffs and scrambled around on his own for two days before being found. The lighthouse at Point Perpendicular, being two-and-a-half hours' drive from Sydney, is a bit far for a day trip — but you can always factor it into a weekender. Entry into the lighthouse is prohibited, but the views from the grounds are ridiculously good. There's the entirety of Jervis Bay to the west and the sprawling Tasman Sea to the east. Just make sure you're not there when the Defence Department is going about its gunnery practice. This is Australia's first-ever lighthouse. Ever since 1791, a light has shone from Macquarie Lightstation, guiding ships away from the rock faces below. Back then, a beacon powered by wood and coal on a tripod did the job. But, in 1816, Governor Lachlan Macquarie asked architect Francis Greenway to come up with a lighthouse proper. So he did. But by the 1880s, his sandstone masterpiece was falling apart, so James Barnet designed a replica, which was built with stronger, tougher materials. You can walk around the grounds at Vaucluse to your heart's content, but if you want go inside, you'll need to book a tour. Like Grotto Point, Cape Bailey Light is on the small side. Its job is to light up the south head of Botany Bay. Compared to other lighthouses on this list, it's pretty young, having only operated since the 1950s. It's also one of the most environmentally-conscious, being solar-powered. Unfortunately, you can't go inside, but you can check it out from the outside, by following the Cape Bailey Coast Walk from Cape Solander. If you're walking during spring time, keep an eye out for whales. Wollongong is the only spot on the east coast to have two lighthouses. You may as well visit them both while you're down that way, but if you've only time for one, make it Flagstaff Hill Lighthouse (also known as Wollongong Head Lighthouse) on Wollongong Head. It was the first lighthouse in New South Wales to go 100 percent automatic and is now heritage-listed. Take cheese and crackers with you as it's a tip-top spot for a picnic. If you've some spare time, pop into Thirroul for excellent coffee, vinyls, artwork and maybe a surfing lesson. 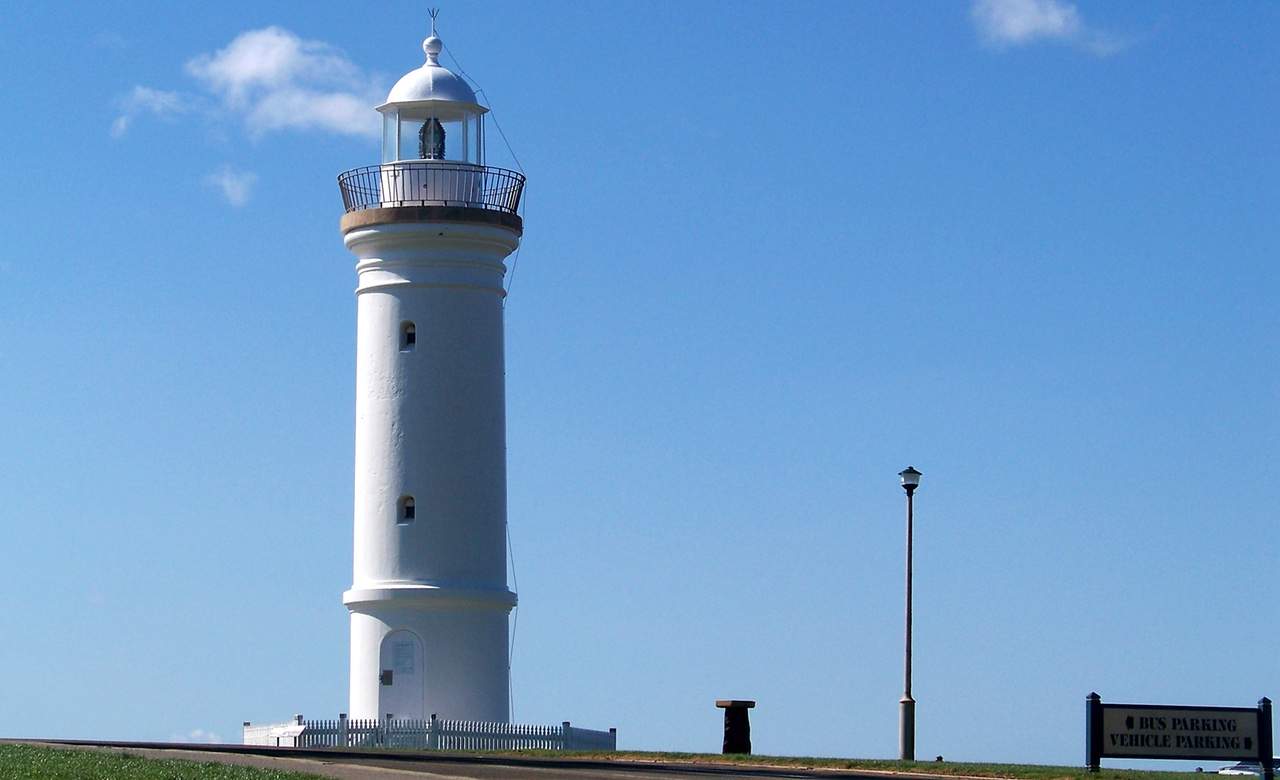 Half an hour's drive south of Wollongong, you'll hit Kiama Lighthouse, which has been lighting up the South Coast since 1887. If you're there on a weekend, drop by the museum for a history lesson, and for extra kicks anytime, visit the famous blowhole and ocean pool, just nearby. The 22-kilometre Kiama Coast Walk, which stretches between Minnamurra River mouth in the north, and Gerringong in the south, is also worth adding to your itinerary.

Published on March 18, 2016 by Jasmine Crittenden