Six Creative Ways for a Cheeky Nap During Your Workday

Nap desks aren't the only way to sleep on the job.

Working's tough y'know? Workin' 9-5, takin' meetings, chasin' clients, adujstin' ties. Sometimes you just need a little pick-me-up in the middle of the day, a little nap, a cheeky doze, a sneaky snooze. Studies have shown taking 10-20 minute power naps during the day can boost your alertness and make you a more productive, switched-on worker. It's well-known that post-lunch siestas are a common tradition in some countries like Spain. So how does one successfully nap in the midst of a busy working environment?

We've rounded up the best new inventions and Sydney facilities to help you get that quick little shut-eye you need to re-energise, blitz that Power Point preso and score a glowing compliment from your boss. No pyjamas needed. 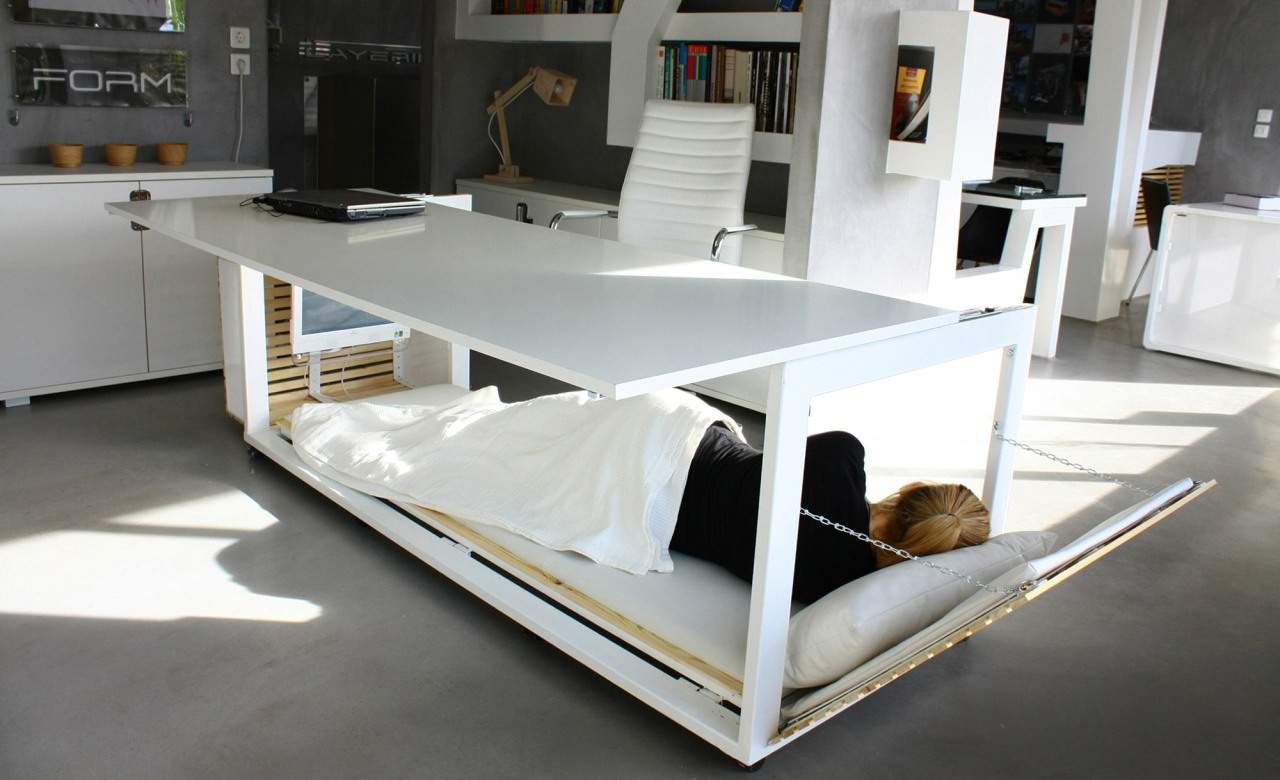 This is the newest one we've all be freaking out over this week. Created by Greek design firm NL Studios, the '1.6 S.M. of Life' (doesn't that just roll off the tongue?) is a new desk with its own in built-in sleep pod that seems perfect for a quick on-the-job power nap. Made from solid wood, metal and white leather, the prototype includes a slide-out top and removable side panels, allowing you to easily transform it from desk to bed and back again.

According to an interview with A' Design Awards and Competition, designer Athanasia Leivaditou came up with the idea after seeing her graduate school classmates sleeping on chairs during late night study sessions. "The main concept was to comment [on] the fact that our lives are shrinking in order to fit into the confined space of our office," she said. 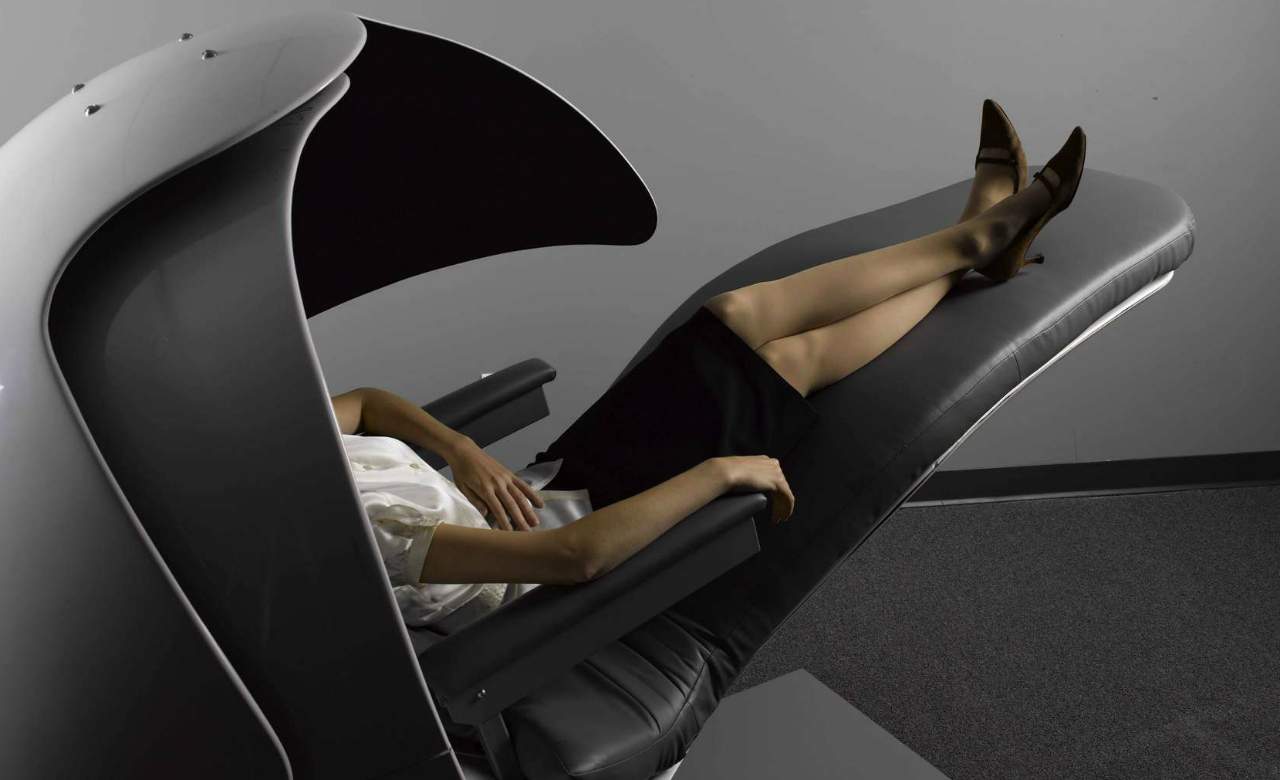 Nap pods are becoming commonplace in high tech, forward-thinking workplaces around the globe, but if your workplace isn't Facebook or Google, you might need to get creative. There's a couple of Sydney nap pods around the city, but often you either have to work there, have a gym membership or be a Sydney Swan. There's nap pods in the SCG reserved for A-grade players, and there's pods in the Virgin Active gym in Pitt Street Mall. Maybe you should ask your boss to budget for (or if it ain't gon' happen, get your office to crowdfund) a nap pod — there's some schwanky, exxy ones at Podstyle or Metronaps. 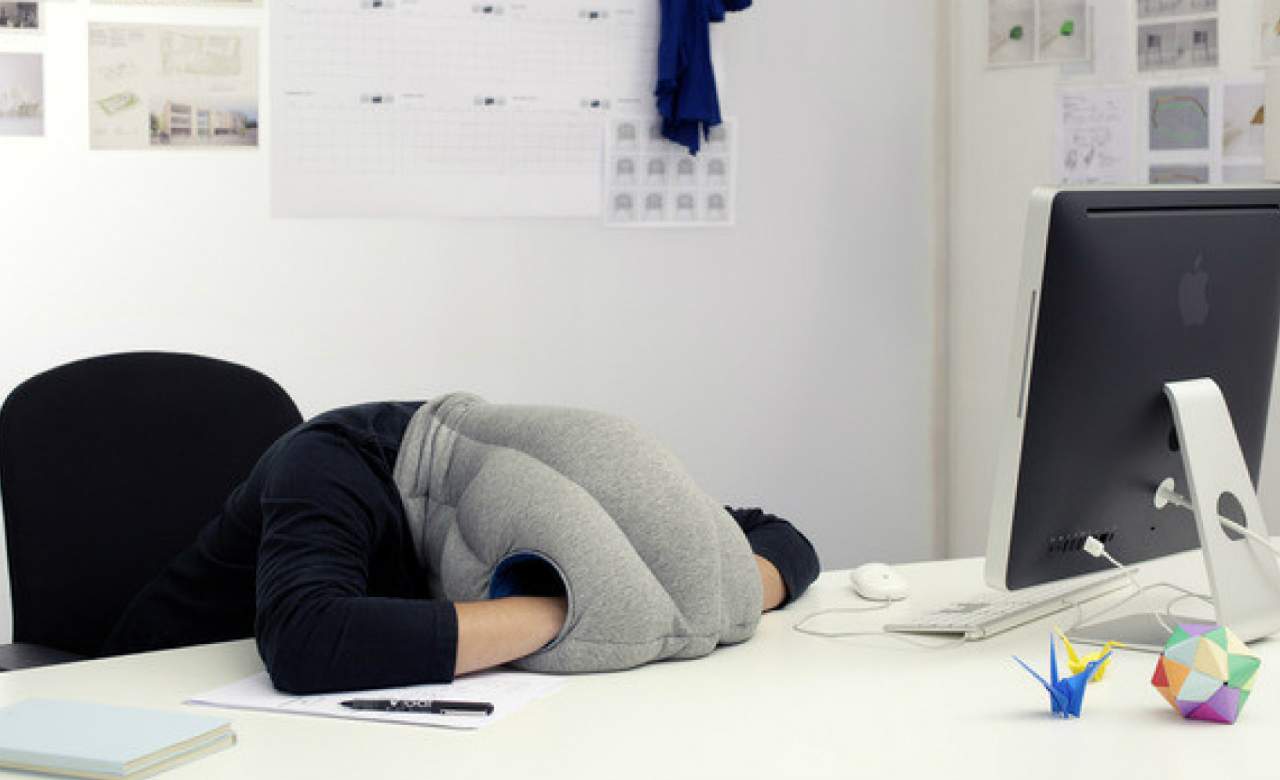 Take a micro-sleep in privacy and comfort - anywhere, anytime. One of our favourite Kickstarter inventions of 2013, the ‘Ostrich Pillow’ might well have been just another designer’s castle in the air. But with 1,846 backers having provided support to the tune of $195,094, it’s become every dreamer’s reality – in airports, offices and parks all over the world.

Architecture and design studio Kawamura-Ganjavian (also known as Studio KG) made the Ostrich Pillow as a revolutionary new product to enable easy power naps anytime, anywhere. "[Its] unique design offers a micro environment in which to take a cosy and comfortable power nap at ease," their Kickstarter page said. "Its soothing soft interior shelters and isolates your head and hands (mind and body) for a short break, without needing to leave your desk, chair, bench or wherever you may be.’ Made of ‘Flexible Fabric’ and filled with ‘micro balls’, the pillow is being sold online by Studio Banana Things for $US99. 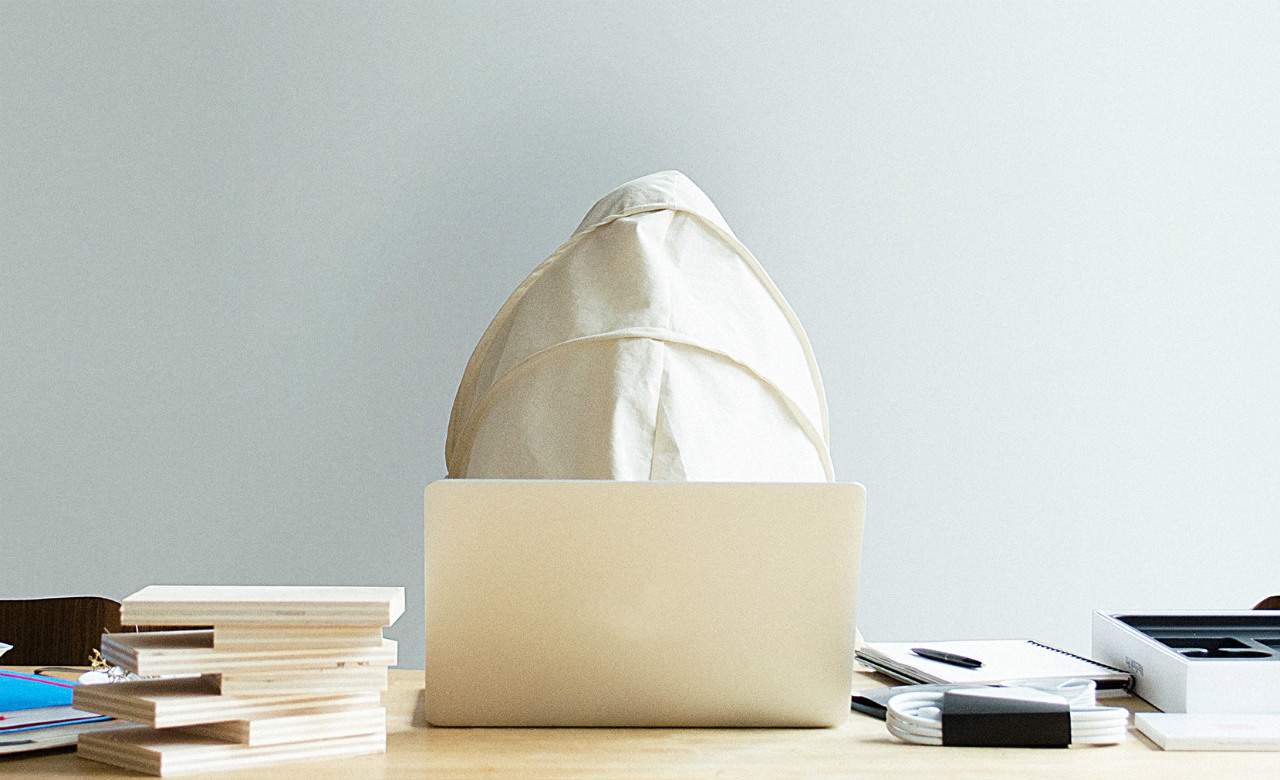 Nothing says 'go the fuck away, I'm nappin' here' like pulling an entire tent over your desk. Invented by Eden Law, a an MFA student at New York’s School of Visual Arts (SVA), the Nutshell lets you find the cocoon of peace you've been after, right at your desk. Aimed at reducing stress and providing a temporary respite from your co-workers, it's a collapsible, wearable, device, "a pod-inspired platform for productive break-taking." If nothing else, it'll simply freak your co-workers out enough they'll leave you alone forever.

While the Nutshell isn't in stores yet — a bloody student invented it as an assignment, because crippling genius — we've got everything crossed for worldwide distribution. In the meantime, we'll just have to make do with making isolation pods out of our jackets, magazines and anything else that will stop Janet asking for that campaign budget. 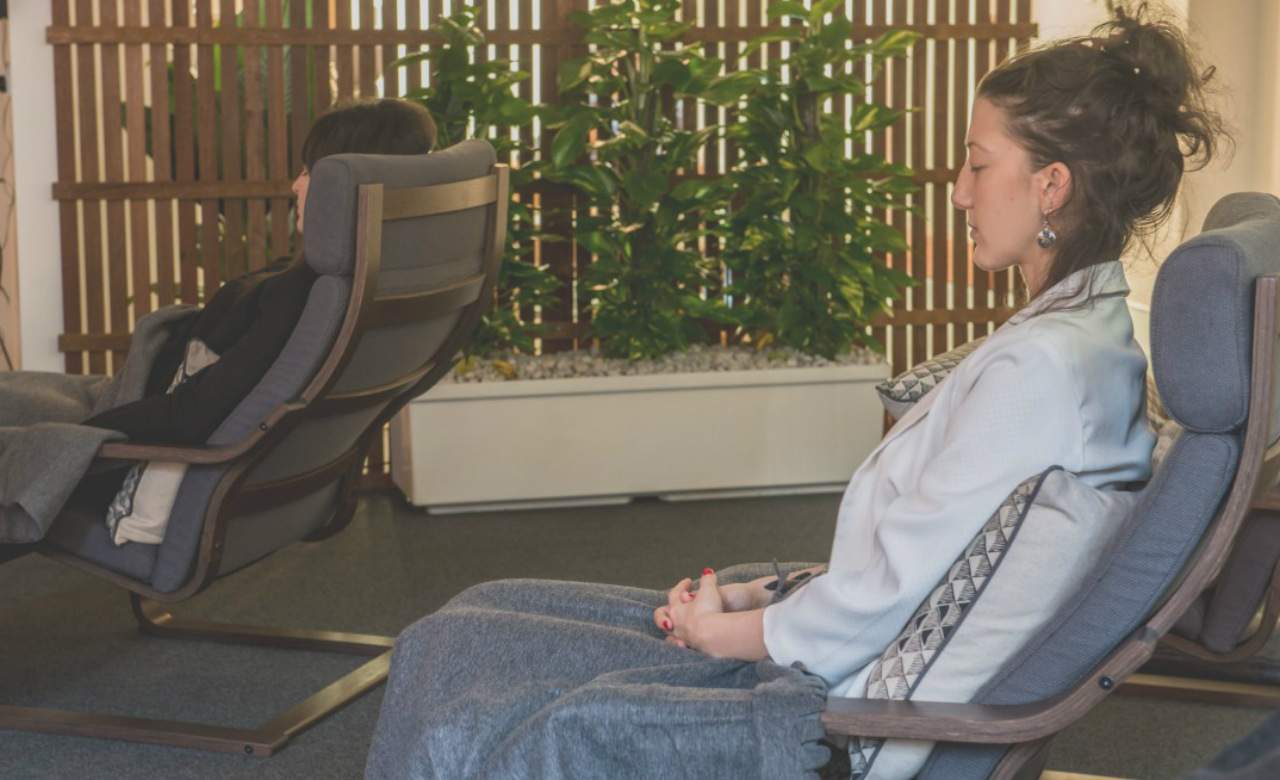 Yeah, so not exactly a nap, but the effects of meditation should leave you as refreshed and spritely as a strong cup of #damngoodcoffee. The good folk at Centred Mediation in Sydney’s CBD can help you find a state of light nappery, as Australia’s first guided meditation drop-in studio.

The drop-in factor means it’s one of the best for busy people and full-time workers as their 30-minute guided meditation session are designed to chill you out on your lunchbreak and don’t even require you to sit cross-legged on the floor in your ironed suit pants. The centre is set up with comfortable armchairs, where you repose with a cup of tea and allow your brain to stop worrying about quarterly fiscal doodads and synergy feelings. Sounds pretty dreamy. 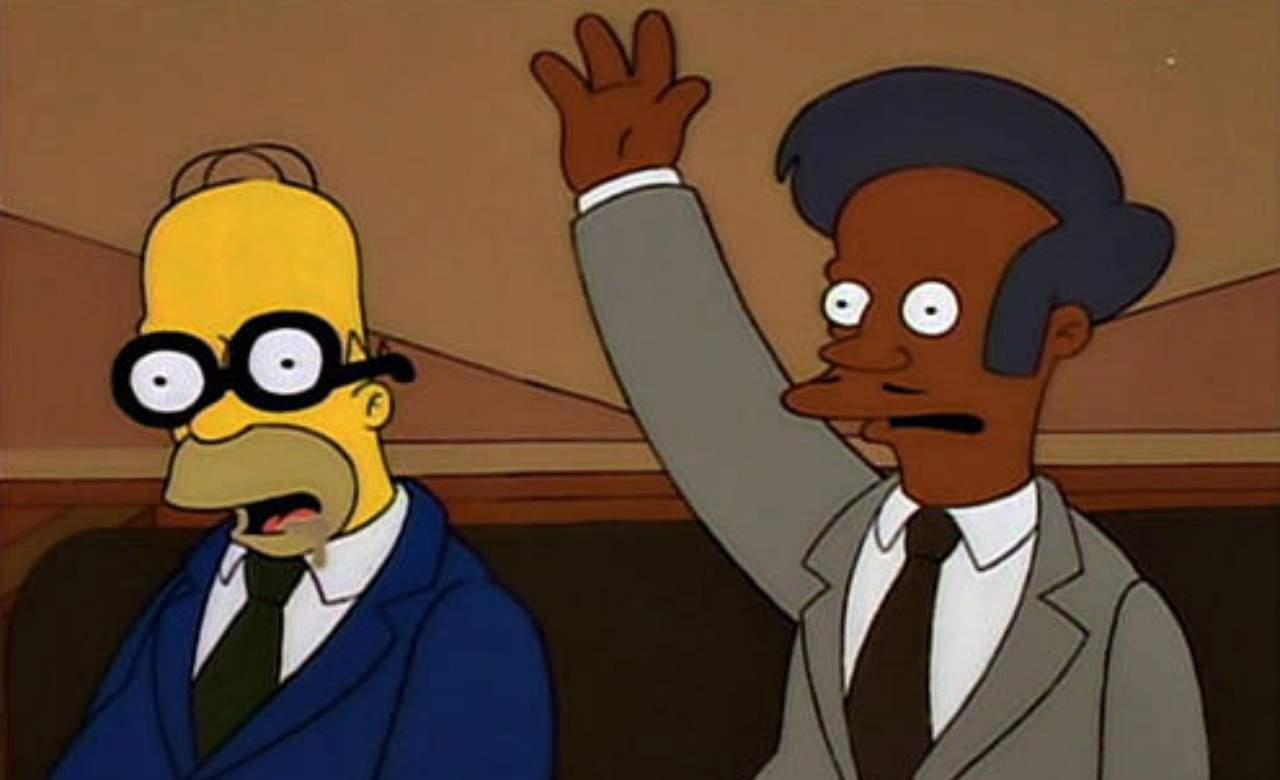 If your office isn't about to invest in nap desks, nap pods or Ostrich Pillows any time soon, you're going to have to Macguyver the situation. Wear sunglasses indoors for a cheeky, highly unsubtle siesta at your desk. Bring a plane pillow and earplugs for naps on the loo. Leave your expensive belongings in the office and hit the park for a lawn-based nap. Just be wary your sleeping self could be pilfered by thieves, because people suck, so leave the laptop behind.

If all else fails, plonk your forehead on the keyboard. Just don't get fired now.

Published on September 25, 2015 by Shannon Connellan