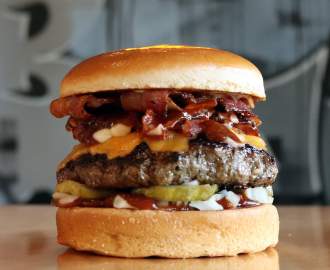 Where to Find the Best Burgers in Wellington

When in doubt, they say to go back to your roots. Given that Guy Ritchie's last two films were Aladdin and King Arthur: Legend of the Sword, it's fair to assume that doubt had squarely reared its head. As a director whose name alone evokes the sound of cockney rhyming slang and the image of grimy London back alleys, dancing bedazzled elephants were about as off-brand as it gets. So he goes back to his roots with The Gentlemen — and it's a warm and welcome return.

Boasting an enviable cast, The Gentlemen is a Lock, Stock and Two Smoking Barrels and Snatch-style crime caper centred upon Mickey Pearson — a marijuana kingpin looking to exit the UK's drug trade at the height of his career. Played by Matthew McConaughey, Mickey is a charming but ruthless American expat whose fondness for the London lifestyle sees him decked out in tweed, cavorting with the aristocracy and taking tea whenever the opportunity calls for it. When word of his impending retirement begins to spread, however, its sets off a series of secret alliances and double-crosses that puts the entire deal at risk, as well as a number of lives.

There's a lot to like about The Gentlemen, but the highlight is surely its unofficial narrator, Fletcher (a delightful turn by Hugh Grant). Fletcher is a seedy private detective who digs up dirt for the tabloids. Rather than dish said dirt on Mickey, he decides it would be more profitable to offer to lose it in exchange for a healthy payout. The film structures its story around Fletcher as he makes his case to Mickey's bodyguard and consigliere, Raymond (Charlie Hunnam) — which he does by laying out the details as if he's writing a screenplay. The meta nature of it all could've been right on the nose, but Ritchie pulls it off thanks in no small way to Grant's giddying and likeable performance. Where Ritchie rediscovers his mojo by returning to his roots, Grant does so by ditching, the foppish hair and awkward humility, and replacing it with homoerotic innuendo and sleazy hubris. He goes completely against form — it's a joy to behold.

So too is Michelle Dockery as Mickey' wife, Rosalind. Every shred of her time on Downton Abbey is abandoned as she struts and swears her way through The Gentlemen like an Essex-based Lady Macbeth. By contrast, Colin Farrell plays one of the most understated characters of his career, but the result is just as compelling. Known simply as Coach, he trains local youths in boxing to help rehabilitate them from a life of crime. Sporting his real-life Irish accent and a selection of remarkable tracksuits, Farrell lights up his scenes with equal parts controlled menace and lyrical wordplay.

Against such terrific supporting roles (Succession's Jeremy Strong also deserves mention for his amusing, albeit also cartoonish turn), the film's two leading men are far less memorable. That's not to say they don't deliver the goods — it's just that their goods are less sparkly. Hunnam doesn't quite nail the reserved tough guy routine, although he does land the film's best line. As for McConaughey, he forever feels like the odd man out, with his southern drawl at odds with the abundant cockney.

Overall, The Gentlemen is fun, to put it in the simplest of terms. It's certainly not without its faults — the patchwork of styles, from action film to hip hop music video and everything in between is constantly jarring — but the general experience is an agreeable one. Like the scotch enthusiastically consumed by Fletcher throughout, The Gentlemen is a little rough at first, but smoother with every sip until you're silly drunk and smiling like a fool.