In an art gallery next to a river in a nation girt by sea, Brisbane's Gallery of Modern Art has water on its mind. That's hardly surprising — given the current impact of climate change in Australia, the recent lack of rain, and the widespread drought and bushfires, water should be a constant topic of contemplation for us all — but GOMA is pondering the subject in a distinctive and creative manner.

As part of an exhibition simply entitled Water, the South Bank spot has filled its walls, halls and floors with pieces that examine the role of H20 in our lives. Water's importance to both humanity and the planet that we call home can't be underestimated, so this stunning showcase often goes big. It's impossible to ignore the eponymous substance when you're walking up and down a riverbed made out of 100 tonnes of rock, for example — or staring at animals of all shapes, sizes and species as they share a drink around a room-sized water hole.

While art-lovers can't splash around in water itself, they can observe and interact with H20 in a variety of forms. A sculpture made out of foam from soapy water ebbs and flows thanks to natural forces, while a real-life snowman earns pride of place — in an industrial freezer to keep it safe from our sweltering climate, of course. Elsewhere, giant bubbles hang from the ceiling, ocean waves rush and crash on a screen, and an enormous blue tarpaulin represents the sea in a disarmingly serene fashion. Also on the bill: one of Yayoi Kusama's Infinity Nets.

It's an exhibition designed to wash over you — and whether you live in Brisbane or are planning a trip there soon, it's one to soak in during its five-month run. There's much to see, so we've outlined five huge highlights that you won't want to miss. Let them sweep over you. Exhibiting in the southern hemisphere for the first time — and for only the second time ever — Olafur Eliasson's Riverbed is an astonishing work. Recreating an Icelandic stream using more than 100 tonnes of rock seems so simple, but this piece is enormous in several senses of the word. Firstly, it fills a cavernous space at GOMA that has previously hosted entire exhibitions (the recent Quilty showcase, for example). Sloping upwards, and with an actual trickle of water snaking through its centre, it's also monumental in its impact. Treading over all those stones isn't easy, and requires ongoing thought and navigation. That means that you're constantly interacting, contemplating and engaging with the Berlin-based, Danish-Icelandic artist's creation — and its statement on the state of the natural world — both physically and mentally. Wearing flat, comfortable shoes is recommended, obviously. 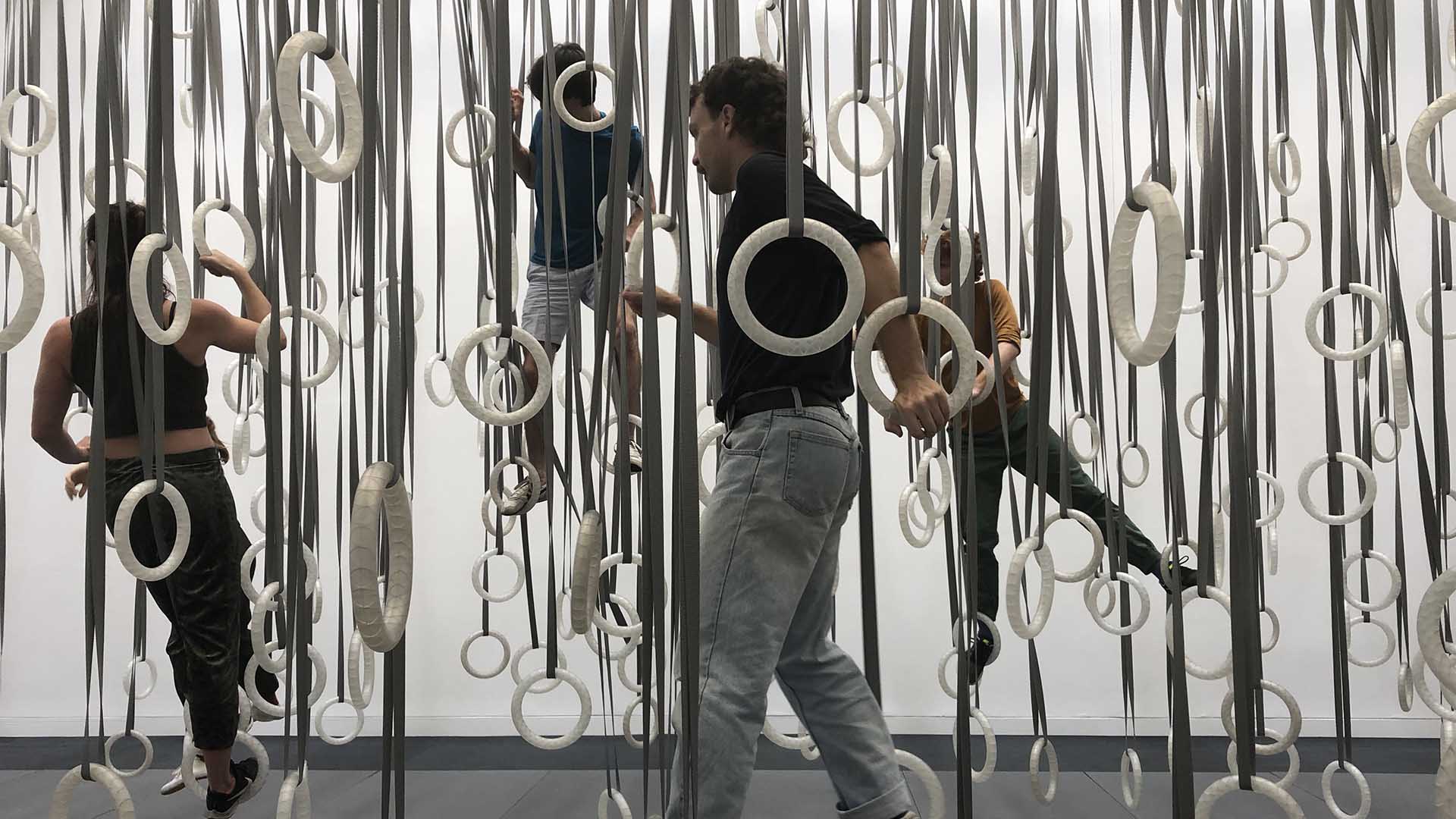 THE FACT OF THE MATTER — WILLIAM FORSYTHE

The second of Water's big interactive pieces (and the second to require sturdy shoes), The Fact of the Matter treats visitors to a workout. The gymnastic sculpture is made of suspended rings hung at different heights, and encourages patrons to jump on and climb through. A word of warning, though: you'll need considerable co-ordination and core body strength to do so. In fact, GOMA doesn't expect that many people will actually make it all the way across this eye-catching piece by William Forsythe — which is partly its point. When folks attempt the immensely active feat, they move through the artwork with a sense of flow, and are forced to think carefully about each step and pathway. It mightn't have been immediately apparent otherwise, but this installation boasts a plethora of parallels with water — including encouraging everyone to get creative about solutions, and to realise their place in a unified system. Displaying at GOMA for the second time after its initial 2013 run, Cai Guo-Qiang's Heritage is another of Water's pieces that isn't done enough justice by a mere description. Inspired by the artist's trip to North Stradbroke Island in 2011, the artwork features animals lined up around a water hole, all sharing a drink, with zebras standing side by side with pandas — and other such unlikely combinations. Although smaller than its previous version, this new iteration still features 45 critters peering into a blue pond, and leaves a firm imprint. Visitors can walk around the perimeter, peer at it from different angles, sit and ruminate, and watch out for the drop of water that falls from the roof periodically, causing small but noticeable ripples in this otherwise peaceful utopian scene. Like much in Water, Snowman takes a straightforward concept and turns it into a thoughtful and impactful piece of art. Great creative works have always done that — the Mona Lisa is just a portrait, and Andy Warhol's pop art thrives on repetition, for example — and this playful piece delights and intrigues in a powerful way. Yes, it looks adorable, no matter whether its smile is firm or drooping. When you're looking at a snowman that's clearly out of its element, however, you're made to think about how it's out of place and what it represents. There's no avoiding the fact that, as the planet warms, the humble snowman's habitat is decreasing. Staring at three balls of snow housed in an industrial freezer and set against Brisbane's warm climes — with trees, greenery, the river and plenty of sunlight all visible behind the artwork — will do that. There's a hypnotic rhythm to Cloud Canyons, the vibrant sculpture by David Medalla. Inspired by the weather in general and clouds specifically, it flexes and shuffles ever so slightly, but every breath-like movement is still noticeable. Given what the piece is made out of, its shifting form is to be expected. Piping detergent foam through plexiglass tubes will have that effect (and so will setting the white substance against a stark black background). Designed to represent a small part of a huge cycle, the soapy bubbles push up and down, twist around, then puddle and evaporate, with the temperature, humidity, atmospheric pressure and gravity all influencing their behaviour. Getting entranced by it is only natural, really.

Water is on display at Brisbane's Gallery of Modern Art, South Bank, until April 26, 2020. For further information, visit the gallery website.