It happens all the time in movies and TV shows: someone stays in a swanky hotel in a gorgeously sunny locale, then spends their time lazing by the pool, swimming up to the bar for mid-splash sips and, when they're out of the water, walking straight down to the beach. It's now happening at the Gold Coast's newest addition, too, with The Langham opening its third Australian site in the Queensland getaway spot.

Welcoming in holidaymakers since Thursday, June 23 — and making its home inside the Jewel towers between Surfers Paradise and Broadbeach — The Langham Gold Coast joins the brand's existing Australian hotels in Sydney and Melbourne. It's also part of a worldwide portfolio that dates back to 1865 in London. But, as first revealed back in May, the new five-star venue's two big drawcards are all about the water, drinks, sand and surf: direct beachfront access, a rarity for new towering places to stay in the tourist destination; and a pool bar you can swim up to while still staring at that ocean view.

Being able to mosey directly from the hotel to the beach — without having to cross any roads — is obviously as straightforward as it sounds. As for the pool bar, it's serving up light snacks, as well as champagne, rosé and spritzes. There are low-alcohol cocktails, too, to either sip in the water or on one of the 60 loungers around the edge. 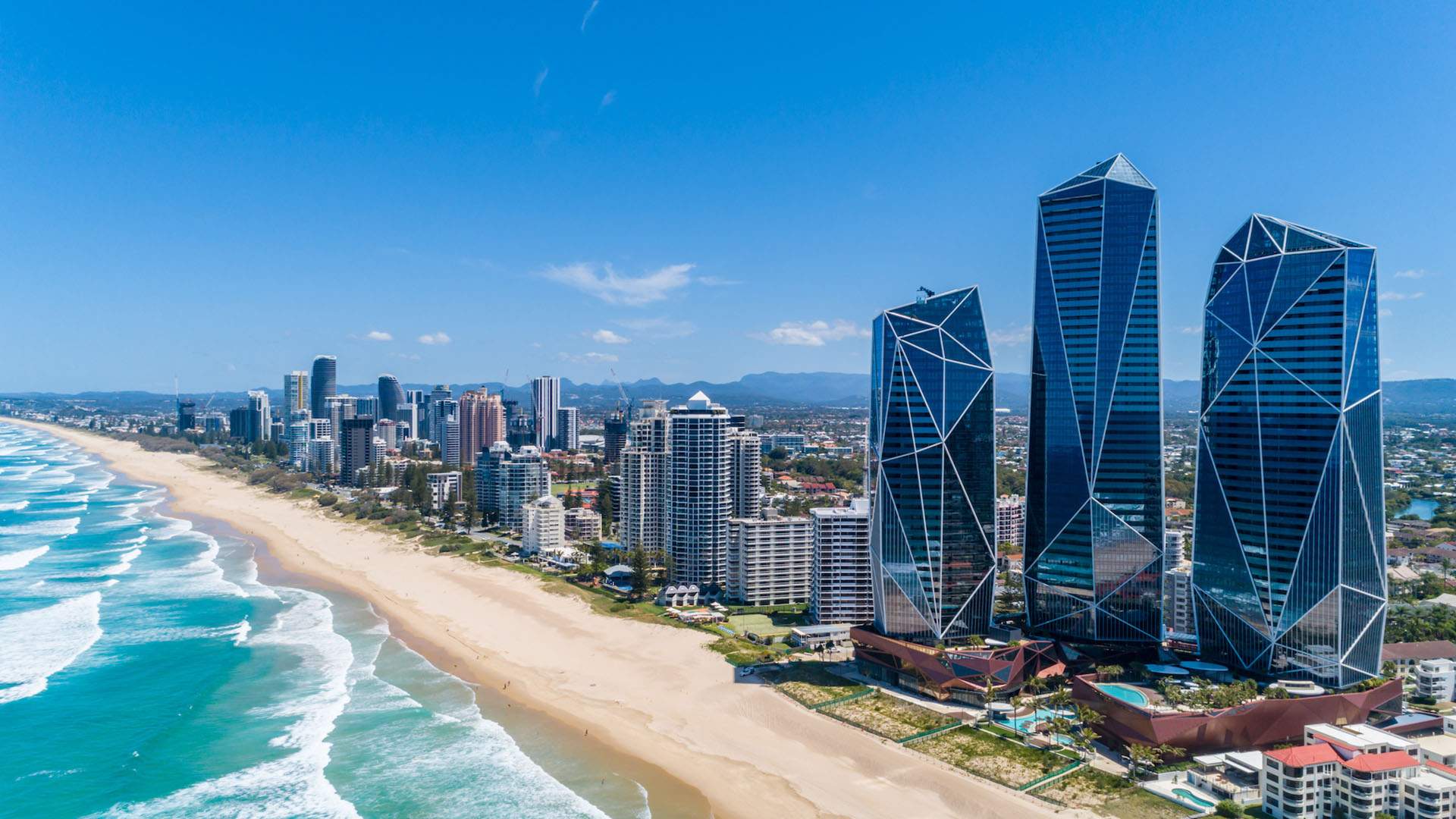 Also included among The Langham Gold Coast's range of food and beverage venues: Palm Court, a 74-seater that goes big on pastries and pool views, with signature cocktail service from 4pm. Here, you can tuck into an 11-option afternoon tea daily, or pair drinks with oysters, sesame-crusted fried salmon and camembert, truffle fries, and caviar with waffle-cut chips by night (the latter if you're feeling particularly decadent).

Or, there's all-day dining spot Akoya, a casual eatery serving meat, fish and poultry over cocktails, as well as the requisite seaside vistas. For lunch, the menu switches between set options from Monday–Wednesday and a buffet from Thursday–Saturday, and also includes champagne brunches on Sundays. Seating 235 inside and out, it also goes heavy on seafood for dinner.

For drinks and small bites, The Langham Gold Coast's lobby bar is your destination. On the beach, there's 26 & Sunny, too, which does fish and chip katsu sandos, Korean barbecue chicken burgers, halloumi fries, coffees, shakes and other casual fare.

And, still in the works is Coral Moon, another openair bar that'll seat 50, and hero cocktails made with Asian spirits and Aussie herbs and botanicals grown onsite. Food-wise, it'll serve up crispy pork belly mantou, prawns with XO sauce and peking duck pancakes. As for actually slumbering between all that swimming, drinking and eating, the hotel has 17 different types of rooms and suites across its 339 places to stay. They're decked out in coastal hues, and with a huge emphasis on luxury. Gorgeous sea views are a big feature, but if you find yourself in a room on the other side of the building, you'll be peering out over the Gold Coast hinterland instead.

Between zipping into the waves and knocking back beverages, guests will soon be able to hit up Chuan Spa, The Langham's wellness centre. There, traditional Chinese medicine will guide the treatment selection — and leaving you feeling blissed out is the number-one aim.

A health club with a gym, plus yoga, pilates and meditation sessions are all part of the onsite offering as well, and — as the pool bar makes plain — places to swim besides the ocean. There's two pools, in fact, one indoors and the other outdoors. You'll need to be outside for those lagoon-style swim-up drinks, though. Find The Langham Gold Coast at 38 Old Burleigh Road, Surfers Paradise. For more information or to make a booking, head to the hotel's website.