Here's What Victoria Park's Revamp Might Look Like, Including a Tree House Lookout and Water Play Gully

Change is coming to Herston, Brisbanites. Change is coming to the entire city of Brisbane over the next decade — hosting the Olympics will do that — but revamping Victoria Park / Barrambin has been in the works long before that news. First announced in mid-2019, the new vision for the inner-city site involves transforming it into a 64-hectare destination complete with a tree house lookout, water play gully, high ropes course, mountain bike track, reinstated water holes and wetlands, and a community edible garden. And, as the Brisbane City Council has just revealed, the project now has a new draft master plan.

That might not sound all that exciting, but plenty has happened with the proposed revamp over the past few years. Brisbane City Council first undertook a months-long community consultation process, with more than 5400 people tendering submissions and over 3500 folks showing up to an open day back in September 2019. Then, it unveiled an overview of the best suggestions in December that year, which it combined with advice from local and international design experts to come up with a new draft proposal that it also asked for feedback on. In 2020, it released another plan — and in 2021, it closed the golf course and opened up a heap of parkland, too, as an early step. Now comes the latest rundown of what else is in store, much of which will sound familiar from past iterations. This time, though, it builds on the 51,000-plus ideas and pieces of feedback received during the past phases — and takes into consideration that future works will need to cater for Victoria Park's temporary equestrian cross-country course, and its role as the host of BMX freestyle events, during the Brisbane 2032 Olympic and Paralympic Games.

So, moseying through wetlands, riding along rainforest mountain-bike trails, peering out from a treehouse lookout to take in views of the city skyline and mountain ranges, and climbing a high-ropes course — they're all included, all on the edge of Brisbane's CBD. 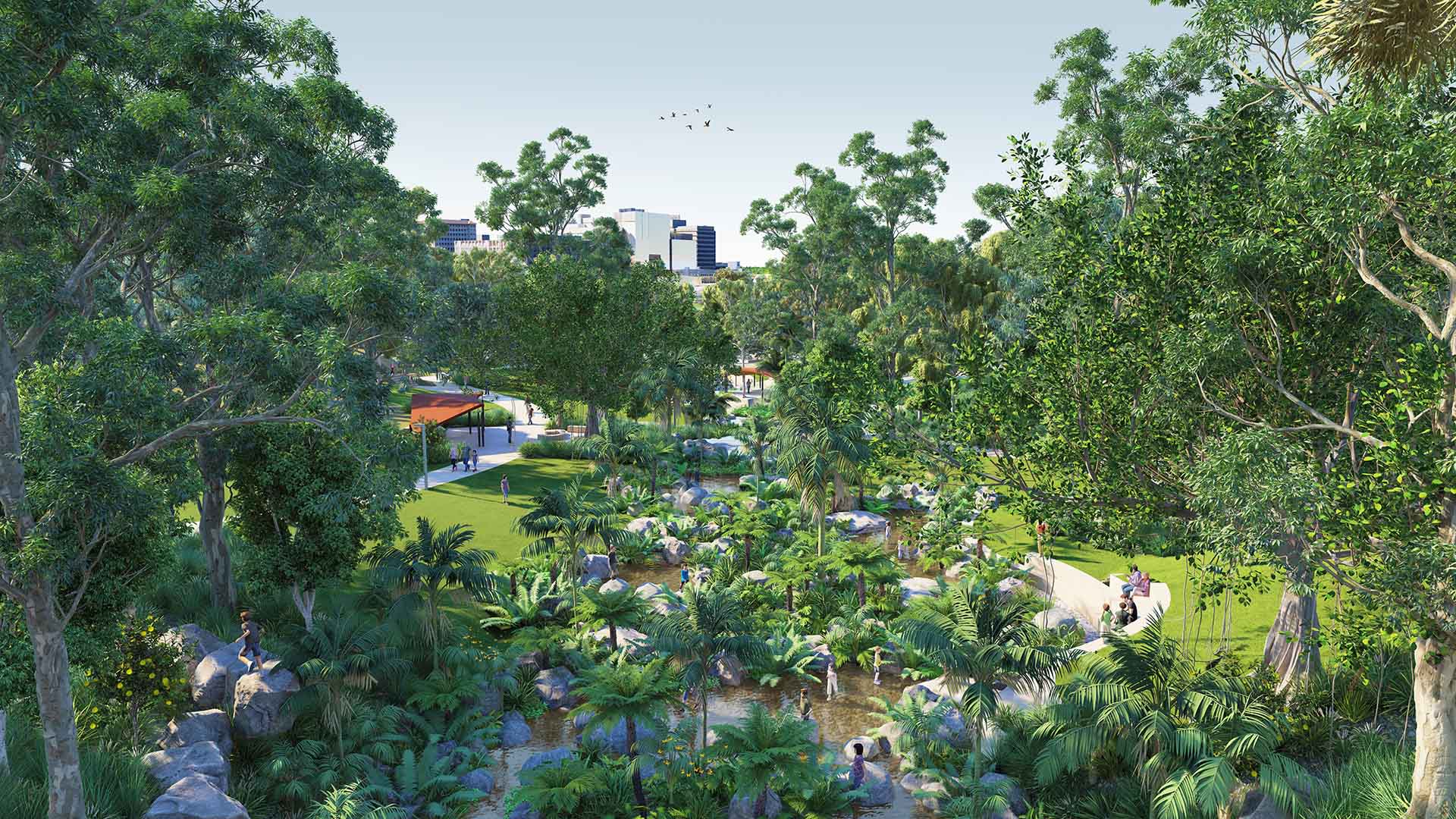 Also on the agenda: a cafe as part of the lookout, an entire 'Adventure Valley' including the bike track and high-ropes setup, a another water play area alongside the nature water play gully, and an adventure playground.

The existing pedestrian and bikeway bridge will get an upgrade, and there'll be a community sports precinct as well. And, an Education Hub and Visitor Centre, too — plus plenty of shady foliage including revegetated forests and pockets of native bushland. Regarding all that greenery, Brisbane Lord Mayor Adrian Schrinner advised that "over the park's transformation, we will increase tree canopy cover from 10 to 60 percent, with more than 10,000 trees and shrubs already planted, including 80 native species."

"This will be an incredible venue during the Brisbane 2032 Games and Council has already been working with experts to ensure that the equestrian cross country course is integrated into the master plan. Once the Games are over, the course will revert to public use and our plan for that part of the parkland will proceed," the Lord Mayor continued. 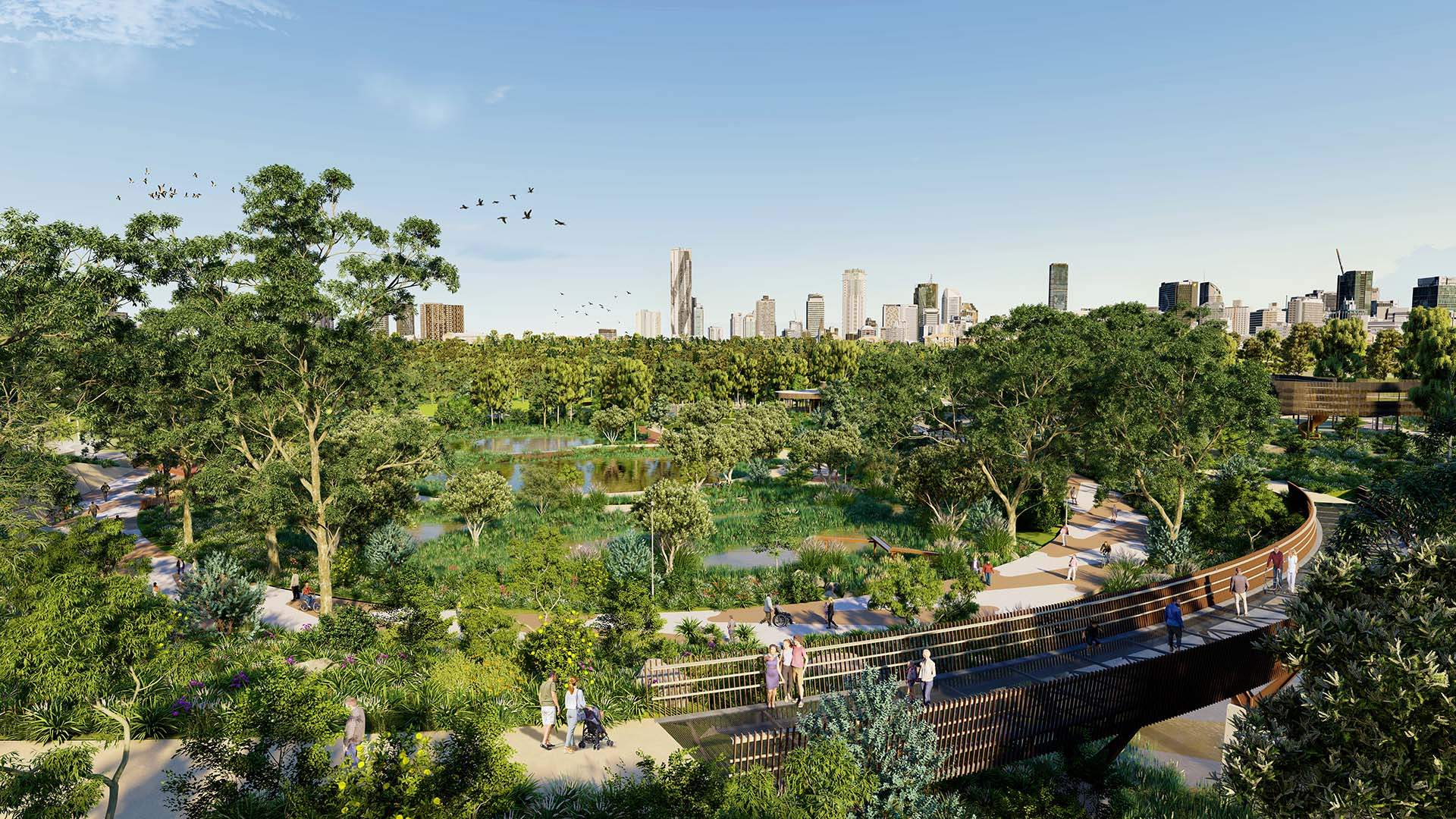 In the immediate future, Victoria Park is also getting new park furniture, shelters, picnic tables, barbecues and drinking fountains — and yes, the existing putt putt course, driving range, bistro and function centre are all staying open while the revamp takes place (should you have the urge to play mini golf or grab a bite to eat).

When the full makeover is done, the transformed Victoria Park will become Brisbane's biggest new park in five decades, and one that'll alter the face of the inner city.

A completion date for the revamped park is yet to be set, other than after the Olympics. If you have thoughts, the current draft plan is open for feedback until Sunday, October 30. Find Victoria Park on Herston Road, Herston. For more information about the overall transformation, or to provide feedback on the current draft plan before Sunday, October 30, visit the Brisbane City Council website.