This year there are eight light precincts to explore — here's a rundown on each one.

Each year, Sydney says a big screw you to its regular programming and turns things up to 11 for Vivid Sydney. That counts for extra gigs at the Opera House, parties at galleries and talks at various institutions, but it also gives the city the opportunity to turn on every bright light it can get its hands on. And the result is always impressive.

This year is no exception, of course — like last year, the trail will stretch from Kings Cross to Barangaroo and over the Bridge to Luna Park and Chatswood. There's a lot of ground to cover and — especially during the opening weekend — a lot of crowds. So put on your walking shoes and your most patient face, because here's what's happening at each precinct every night until June 15. Lights come on at 6pm (5pm at Darling Harbour and 5.30pm at Taronga and Chatswood) and turn off at 11pm. The city's oldest green space is has been transformed into a lit-up wonderland yet again — and it's a great place to start your light walk. This year, it features 15 captivating installations. Peppered throughout the site will be a colourful assortment of characters, from giant bees and a field of fireflies to exotic birds. And you can expect plenty of food and drink options to fuel your after-dark adventures, including glowing gin cocktails and mulled wine served up from the old school fisherman's wharf- inspired bar.

Take a stroll through the sprawling River of Light to the multicoloured satellite, KA3323, which interacts with sounds from outer space. Behind it, you'll cop a glimpse of the Sydney Opera House, which will be lit up with hypnotic images of Australian flora from LA artist and video maker Andrew Thomas Huang (who has previously created music videos for Björk). Then wander through these giant glowing green blades of grass in the Dancing Grass installation or visit the magical shimmering Firefly Field, made up of 500 individual lights, that will transport you to the Australian forests and mangroves in which they live. The centrepiece of Circular Quay is always Customs House — this year, it will be illuminated with a surreal underwater projection named Under the Harbour. It's the work of Melbourne-born, LA-based designer Ben Alpass, and takes you on a rainy twilight tour of the harbour that lies mere metres away. It's worth watching in full if you can get an unobstructed view. If you're more into shooting stars, you can instead avert your eyes to the 62 lights that will be shooting out around the Harbour as part of City Sparkle. The beams are placed on top of the Harbour Bridge, as well as above the Overseas Passenger Terminal, Cahill Expressway and the Bennelong Apartments, and form part of a show each night. Other things to visit in CQ: a bubble installation, an infinity room and a hanging light installation that makes it feel like it's snowing. After you've conquered the crowds at Circular Quay, join the flow of people being herded towards the MCA (you may need to be patient — lots of punters complained of bottlenecks last year). In First Fleet Park, an interactive playground for kidults has popped up with a range of light, sound and physical interactions for you to ogle, climb on and interact with. Inside, you'll find an interactive 'field' of 320 light poles, a reactive LED dance floor, a neon hula-hooping station and a custom-built 'sky walk' that will let you take selfies with the sweeping Vivid views. And that's not to mention the 6.5-metre-tall slide that you can launch yourself down if you so desire.

Wander on to Argyle Cut where beloved animation studio Pixar will have a 30th-anniversary projection set up — expect all of your favourite characters to make appearances, including Finding Nemo and Toy Story (plus a sneak peek of Toy Story 4). Time your visit with The Rocks' Friday and Saturday night markets or head to this rooftop lounge to get a view over the harbour (without the crowds). Yep, that's a giant puppet, and it'll be moving around on the Barangaroo esplanade every night of Vivid for the second year running. The six-metre-tall figure is named Marri Dyin and pays tribute to the Indigenous women who once called the Harbour their home (including Barangaroo herself) and is part of Winter Camp installation along Wulugul Walk. On the other side of Darling Harbour, you can walk under the Milky Way and check out a 16-metre0tall 'Ecobot', which has fictitiously been tasked with saving Earth from extinction and advancing its sustainable initiatives. If you need a drink at this point, we recommend popping into Banksii on the esplanade or Barangaroo House, and make sure you pay a visit to Gelato Messina's glowing pop-up dessert bar at Darling Square — it'll be serving all sorts of glow-in-the-dark goodies. Back for a second year, the Luna Park precinct is offering heaps of over-the-bridge Vivid activations, plus harbour views aplenty. Thousands of LED lights will be strung across the ferris wheel and thrill ride Volaré, with ride passes starting at just a tenner. There will also be roving street performers in glowing costumes and Mediterranean-inspired dining at the park's restaurant, Altum. From there, the spectacular lights on the Sydney Harbour Bridge, Sydney Opera House and Circular Quay are all in view. Once again, the famed grounds of Taronga Zoo will come alive with four brand new captivating installations. As the zoo continues its mission to raise awareness and support for endangered species in Australia and Sumatra, this year's Lights for the Wild gives zoo visitors the opportunity wander the harbourside site after dark, encountering everything from multi-coloured elephants to giant redback spiders along the way.

The light show begins from the moment you hit the zoo's heritage-listed archway. This year, the giant light projection features images representative of the ten fragile species across Australia and Sumatra that the zoo has made a commitment to protect. These include the yellow and black Southern Corroboree frog, the platypus and the Asian elephant. You'll also have the chance to snap a photo alongside three glowing Sumatran tigers, created in celebration of the zoo's brand new cubs: Mawar, Tengah Malam and Pemanah. This is the only light show that is ticketed — you can buy tickets to the nightly 5.30pm and 7.30pm sessions here. 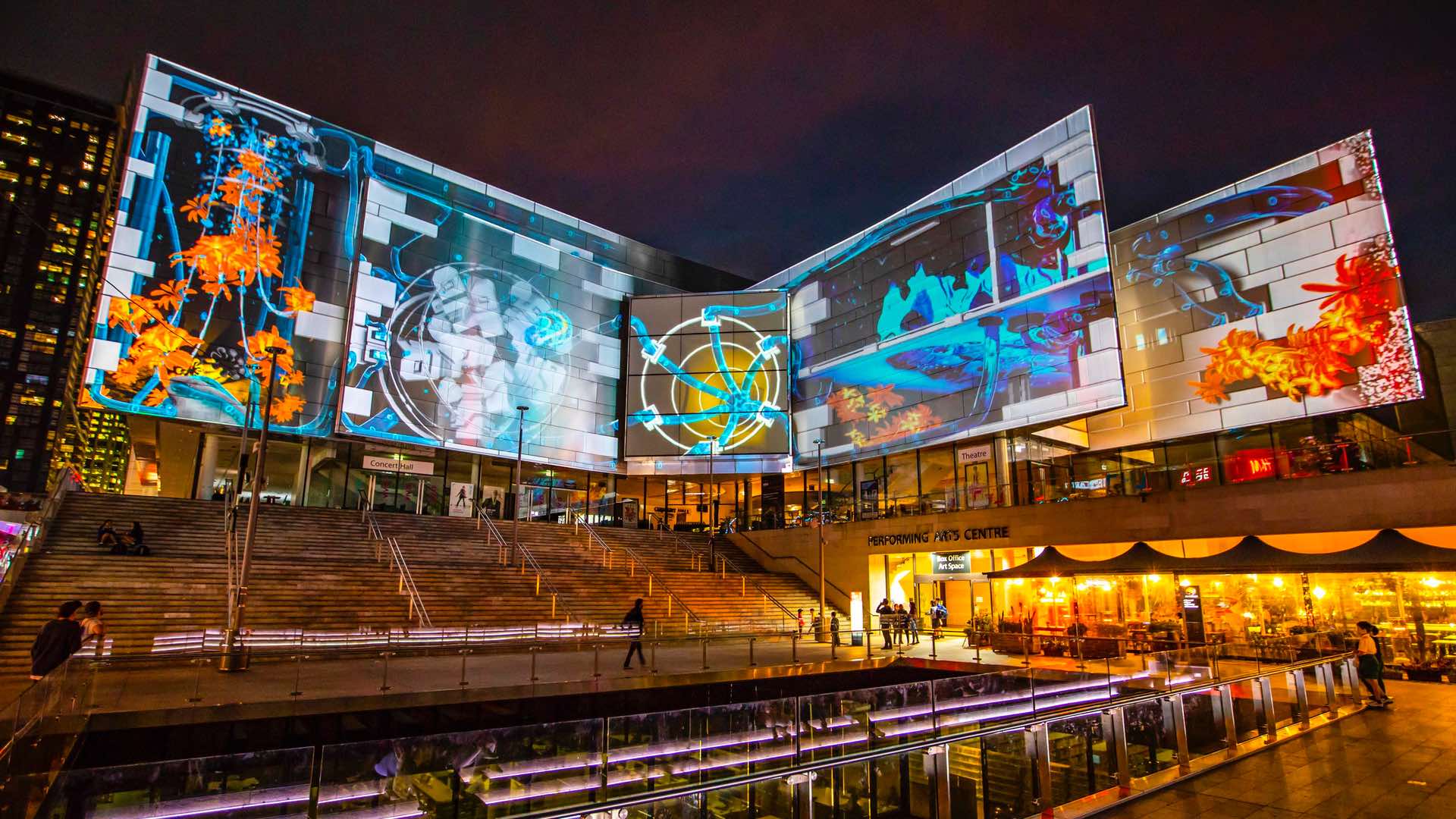 Even if you don't live on the lower north shore, Chatswood Interchange is worth a visit for Vivid. This year there will be 18 installations across the precinct, including a multi-sensory floating sculpture depicting the Chinese mythical creature Qilin, a giant harp-like 'wind chime' and many different projections at Chatswood Interchange. To enjoy the latter, grab a snack from one of Chatswood's many eateries, find a spot and settle in for an hour or so.