“I wanted it to get to a point where the audience felt ‘please save them, they have had enough!’.”

It isn't every year that the Cannes Film Festival awards its coveted top prize to a movie about having sex with — yes, with — a car. That year was 2021, and that winner was French thriller Titane. Topping such a pick might seem difficult but, when it came time to hand out the 2022 Palme d'Or, the prestigious fest gave the gong to a brutal social satire with a queasy, hilarious, cringe-inducing and utterly impossible-to-look-away-from 15-minute-long projectile vomiting scene.

Bodies don't just expel substances from their mouths in Triangle of Sadness' unforgettable and easily most talked-about sequence. Seasickness strikes, what's inside has to come out however it must (and ASAP) and, because that's a situation that strips away all class and power dynamics, there's no longer any hierarchy on the film's ultra-luxurious yacht setting. The scene just might be Swedish filmmaker Ruben Östlund's most awkward and stunning of his career — and that's saying something for a writer/director who actually topped himself by nabbing the Palme d'Or for Triangle of Sadness, given that he also won the same accolade for his art world-skewering previous film The Square.

Getting the one-percent heaving up their dinner for a quarter-hour is only one part of Östlund's smart, scathing and supremely entertaining latest feature. Following two models and influencers, couple Carl (Harris Dickinson, See How They Run) and Yaya (Charlbi Dean, Black Lightning), Triangle of Sadness explores the world of fashion, the lavishness of extreme wealth and being stranded on a deserted island. In the process, it ponders beauty as a form of currency and actively tears down the rich — but it's equally savage towards everyone, bank balance be damned. Östlund is fascinated by human behaviour, after all, and the social contracts by which we all live. Indeed, his current sail through such loaded, complicated and comically ripe terrain not only follows 2018's The Square but 2014's exceptional marriage-in-crisis black comedy Force Majeure. Östlund loves scratching away at how people react in heightened situations, and examining what that says about everyday life. He adores unpacking societal expectations, too. Indeed, for his next movie, he's heading to a long-haul 17-hour-plus flight, then taking away the passengers' main source of entertainment. The in-the-works flick is called The Entertainment System Is Down, in fact, and Östlund describes it as "once again a behaviouristic study, comical and tragic, about being a human being — and about contemporary times when we have become so addicted to these screens, and taking that away from us".

Talking with Concrete Playground via Zoom, he's visibly excited about putting a new batch of characters through the wringer. That glee is palpable in Triangle of Sadness as well — including when everyone is vomiting. With the film now in Australian cinemas, Östlund also chatted through his fascination with alluring worlds, pop culture's present obsession with eating the rich, all that blowing chunks and shooting for a history-making third Palme d'Or. 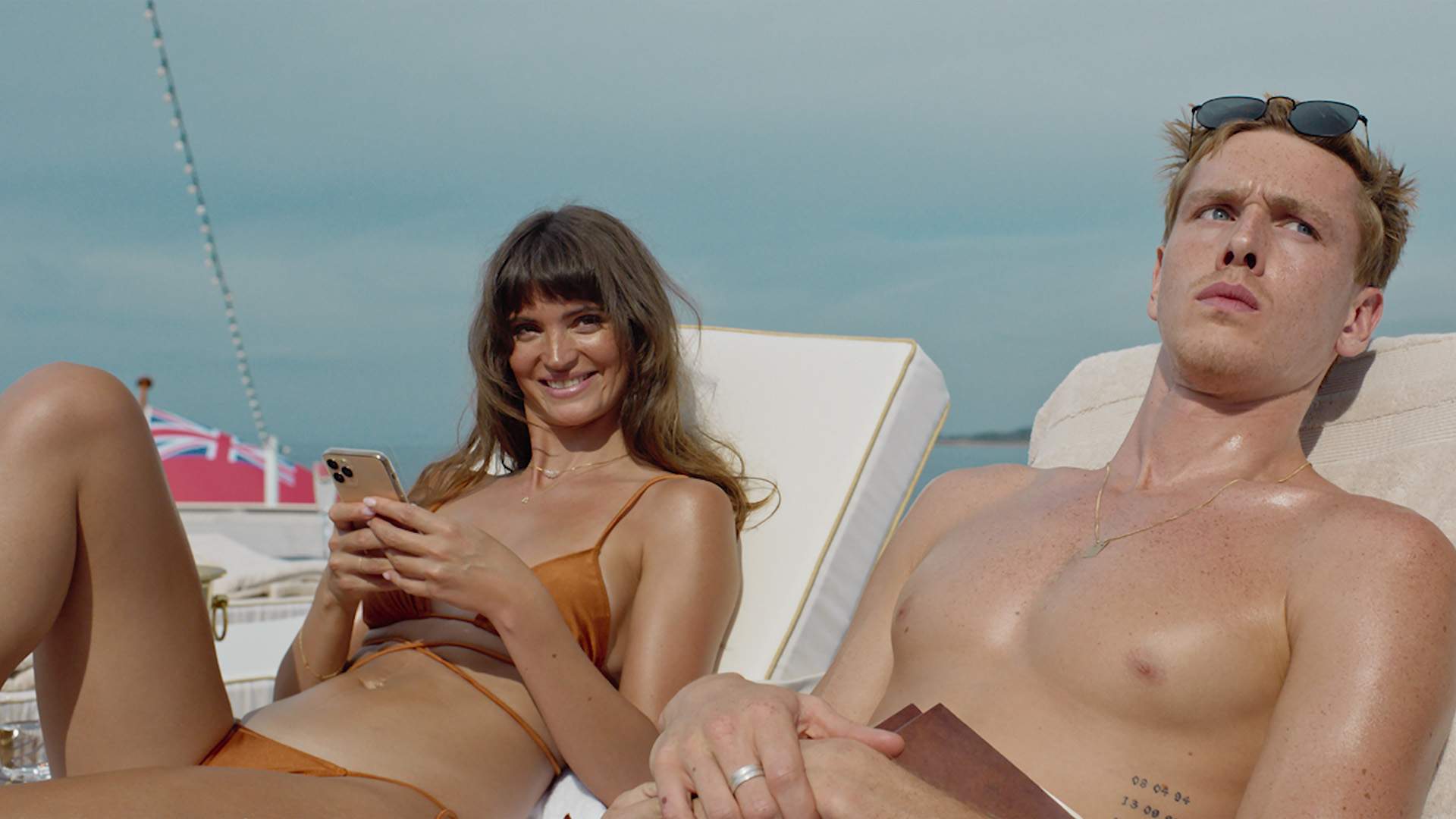 ON TEARING INTO SOCIETAL CONVENTIONS WITHIN ALLURING WORLDS

"I think if I go back to my upbringing, my mother was a primary school teacher and she was talking a lot about sociology with me when I was a kid.

And sociology is, if you are looking at what it actually is, it's very often with human beings trying to deal with social contracts that are broken in some way — or there's an expectation on you as an individual to fit into the herd or things like that, but there's always a broken social contract.

For Triangle of Sadness, the reason that I got interested in the topic was I met my wife eight years ago and she worked as a fashion photographer. And I got very interested in the fashion industry and her profession, and I got interested in beauty as a currency and beauty as a possibility to climb higher in society. So, that was the starting point of the idea. Then I came up with looking at these hierarchies first in the fashion world, then in the luxury world, but then also on a deserted island — when you take away the old hierarchies, looking at our behaviour in that context.

One thing that I decided when I made Force Majeure was that I wanted to let my films play out in an environment that we like to look upon. So I thought when I made Force Majeure: 'yeah I can spend one-and-a-half hours at a ski resort'. With The Square, I thought: 'yeah, I can watch and make a movie that takes place in the art world'. With Triangle of Sadness, then, it was one plus one plus one: 'yeah, I definitely wanted to watch a movie that takes in the fashion world, on a luxury yacht and on a deserted island." ON GIVING AUDIENCES A DILEMMA — AND DRAWING FROM EXPERIENCE

"I always look for a dilemma, so I have a situation that the character is dealing with that has two or more options, but none of them are easy and all of them have consequences — that is basically what a dilemma is. And if you have a dilemma, it's very often easy for the audience to identify with the situation rather than with the character, so they put themselves in the situation.

To go back to sociology, we have classical dilemmas that have been used in sociology, for example the Milgram experiment where they had a test person giving electrical shocks to another test person. We can identify with the dilemma, so we also get an understanding of what failure there means morally and ethically. I always look for that. I very often also look for things that I have been dealing with in my own life, because I think that these everyday life dilemmas — where you're maybe not risking anything physically, but were it comes down to the social contract — they tell us so much about ourselves. When it came to Triangle of Sadness, I was trying to find something that I have experienced that I felt was dealing with beauty as a currency, men, women, gender expectations and so on.

Then I was reminded of this horrible fight that I had in the beginning of my relationship with my wife, where I could feel it was a minefield — you can step on a landmine any second — and I thought 'I have to include this, this is very, very painful, it has to be in the film'." ON EATING THE RICH — AND POP CULTURE'S FASCINATION WITH THE TOPIC

"I have always been a socialist, so I think all of a sudden I'm trendy again — and that's fantastic! But I didn't have a plan of attacking that more now. When I was doing my first feature films, I was more of an arthouse director, I was a little subtle with my concepts, and I was not going straight for what I wanted to tell. But the more free I have become as a director, I have also dared to be more direct. And the setup in Triangle of Sadness lets me do that.

But I think that one thing it is important for me to point out is that I have nothing against rich people. Rich people are nice — they just don't like to pay taxes! ON ALL THAT VOMIT — AND GIVING HIS CREW MOTION SICKNESS

"I wanted to do a scene where we had a drunk Marxist captain reading from The Communist Manifesto to passengers on a luxury yacht that was dealing with seasickness. I was just fond of the idea — that they are playing around with the microphone system and through the speakers in the cabins, the guests are trying to deal with the vomiting but at the same time they have to listen to this political message. The scene actually started with that idea.

When I was shooting it, I also decided that I wanted it to go ten steps further than the audience could expect. I wanted it to get to a point where they felt 'please save them, they have had enough!'.

But you know, because I'm so interested in broken social contracts, I thought it was interesting if the captain's dinner on a luxury yacht where everyone knows how to behave, and the etiquette of how they should behave, was in conflict with the seasickness that becomes stronger and stronger. I just love setups like that. The shooting took place on a gimbal that we could rock, so we could rock the set 20 degrees, which made it very chaotic to shoot. I'm used to being in full control and being able to shoot without having the slightest little sound or anything — being very concentrated — so for me that was a challenge. And actually also, parts of the crew got seasick from the shooting. They had seasickness pills because we were spending 13 days, eight hours every day, on this rocking set. As you can imagine, it was chaos." ON WINNING TWO PALME D'ORS — AND DREAMING OF A THIRD

"I was definitely not thinking about [winning a second Palme d'Or] when we made the film. I felt pressure because I knew that everybody that put in money into the film expected the film to be in competition in Cannes. When we were accepted in competition in Cannes, I said 'okay, mission accomplished, I have given them what I have promised', so to speak.

Then we had a fantastic screening in Cannes. And what happens then is you slowly start to hope for a prize. And when you're invited to the awards ceremony, and the prizes go to other films, and you realise 'wow there's only one prize left'. And then you realise we're going to win the Golden Palm again. The great thing with the second Golden Palm is that it takes away pressure from your shoulders, because then you have shown that the first Golden Palm was actually the right decision from that jury. And what happens after you win two Golden Palms is that slowly a dream is starting — maybe we can win a third one! — because then you would be the only one in the world.

Triangle of Sadness is now screening in Australian cinemas. Read our full review.