From the cackling one-armed demon witch to the not-so-cute cucumber-loving kappa.

From the cackling one-armed demon witch to the not-so-cute cucumber-loving kappa.

If you haven't already checked out this summer's blockbuster exhibition Japan supernatural: 1700s to now at the Art Gallery of New South Wales, there's something you should know: it's packed with paranormal creatures. Yōkai and yurai — mystical and ghoulish — characters are depicted in every drawing, painting, video work and graphic installation. There are 180 works about the spirit world, from rare books by 18th century folklorist Toriyama Sekien to Japan's most famous manga artist, Mizuki Shigeru. It's a world where fans of Studio Ghibli films and Brothers Grimm fairy tales will be equally inspired.

If you have been to Japan supernatural it's likely you've been wonderstruck by the expansive works of contemporary artist Takashi Murakami, but we think you should look a little closer on your next visit to the Art Gallery — as there are a few creepy beings that rear their (sometimes long, snake-like) necks across multiple works, from sumo wrestling kappa (who have a terrifying backstory) to the eyeball that likes to sip sake. Concrete Playground spoke with Assistant Curator Yuki Kawakami to find out more about five particularly haunting characters in this exhibition. 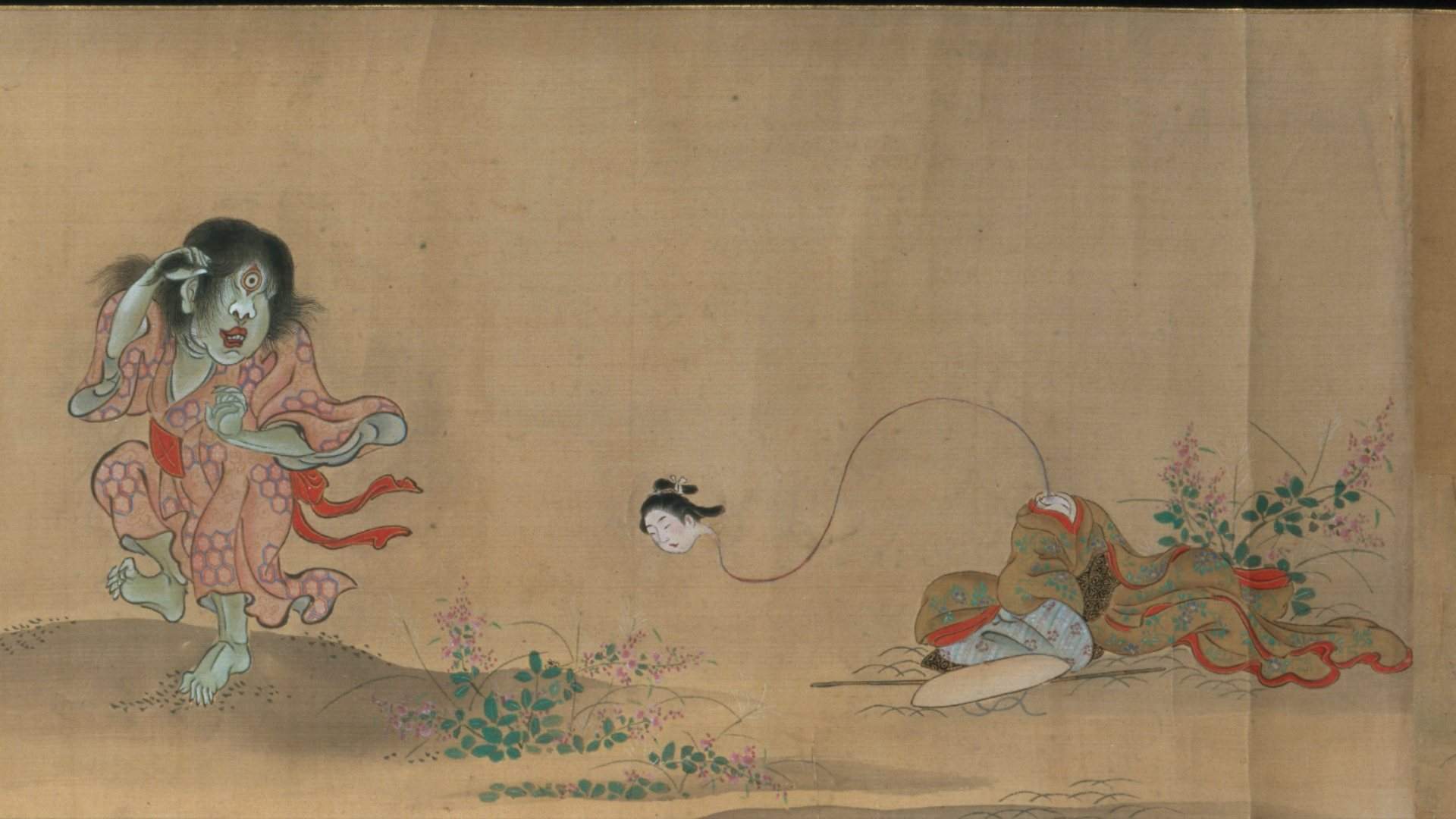 One of the first pieces you'll encounter at the Art Gallery's huge exhibition is a painted handscroll called Night procession of the hundred demons (Hyakki yakō zu) (1772–81). It's by Toriyama Sekien — a folklorist who is also a bit of an enigma. Kawakami tells us, "This particular painting is extremely rare, and though there's not that much written about Sekien, he's very well known for his depictions of these yōkai."

Rokurokubi — or the Long-Necked Woman (pictured on the right) — is a shapeshifting yōkai. By day, the spirit has a perfectly ordinary human form, but by night, the spirit's neck extends, snaking around in the dark to look for bugs and oil in lamps for a late-night snack. The Long-Necked Woman is also known to attach herself to unsuspecting men. "She's depicted in a cheeky way. She draws men through her beauty; her characteristics are trickery and the act of seduction. She's just a boss woman, a man eater," says Kawakami.

Rokurokubi can be found in multiple works. For bonus points, look out for her alleged lover, another long-necked creature called the Look Over Monk. Rumour has it they have a lovechild called Tōfu-kozō (Tofu Boy) who always carries a plate of tofu. Oh look, here's the Look Over Monk — the one with the third eye. Now draw your gaze to the green, frog-like creature that appears to be lurking in a basket. That's a kappa. Kawakami says, the kappa appear in different forms and with different names like kawataro. If you bank in Japan, you may recognise the cheeky fella as the mascot of one of the country's leading banks. But don't be deceived, these water-dwelling yōkai have a sadistic story. It's said they reach inside human bodies through the rectum to snatch at your organs.

You can find the kappa in Sekien's Night procession of the hundred demons (Hyakki yako zu) and also in Tsukioka Yoshitoshi's The heavy basket (Omoi tsuzura) from the series New forms of thirty-six ghosts (Shingata sanjurokkaisen). "In this one it's quite menacing and cheeky. He also likes to challenge people in a game of sumo. There are drawings of kappa against kappa engaged in sumo by the river."

The creatures have elements of frog, turtle and monkey about them — and the popular cucumber sushi rolls, kappa–maki, are named for the creature's apparent love of cucumbers. Note the pool of water on their heads: "When there's no liquid, that's when they lose their powers," says Kawakami. Japan supernatural is all about manifestations of the paranormal in Japanese folklore, art, literature, theatre and film. In this exhibition you'll also meet another volatile creature, that of the oni — demon-like and menacing, but not necessarily evil.

"You can tell a character is not a ghost [or yōkai] because of the claws and the green face. The oni are depicted either by green, blue or red skin — and the claws," says Kawakami. Ibaraki-doji, or the Cackling One-Armed Demon Witch, is found in Tsukioka Yoshitoshi's The old woman retrieves her arm (Rōba kiwan o mochisaru zu). Yoshitoshi was born in Edo (now Tokyo) and he was known for images of violence and ghoulish works after a period of possible mental illness.

Other demon-like qualities to look for are curled toenails and fingernails. Be especially watchful during the twilight hours, when these spirits and demons are more likely to present themselves to us humans. "It's an oni, but they dress so beautifully — they have style." THE DOE-EYED AND DISTANT MOIMOI

Chiho Aoshima is part of Kaikai Kiki, the artist collective run by internationally famous artist Takashi Murakami. She's based in Kyoto, and during her time as an assistant at Murakami's studio he noticed her own yōkai drawings and he encouraged her to do more. "What I find interesting about her work is that she's really into the relationship between nature, death and humans," says Kawakami. "She likes Japanese cemeteries."

A recurring character is the Moimoi, which comes in various shapes and forms. One is pictured as a black blob walking through a cemetery — like in Off to Memorial Service (2009), above — and in another she appears to embody city buildings, trees or entire beaches.

"When I asked [Aoshima] where she gets the Moimoi from, she said she sees a lot of the Moimoi in herself. Whether it's a sense of isolation, or a sense of calm or peace. I read it as a sense of loneliness living in the contemporary world. She also says that when she passes she would want to become part of nature, so you see a strong relationship between nature and death in her work." Mizuki Shigeru is probably the most famous manga artist/historian in Japan. He created a manga series based on yōkai lore that celebrated its 50th anniversary last year. "Anyone from the 1960s onwards would easily recognise these characters. The main character is called Kitarō — and his father is the Eyeball Man, called Medama-Oyaji."

Kitarō doesn't have an eye on his left socket, and in the manga drawings you can see Medama-Oyaji popping out of Kitarō's eye socket to offer him advice. "He also likes to take baths in a little bowl, and he drinks sake."

Shigeru brings a playfulness to his depictions of the yōkai: mysterious creatures that are often mischievous. In The Fifty-three Stations of the Yokaido he places the yōkai within the stations of familiar cities like Kyoto and Tokyo, which you can find on the Art Gallery's walls until March.

'Japan supernatural: 1700s to now' runs until March 8, 2020 at the Art Gallery of New South Wales. Tickets are available to buy online.