Take a look at giant neon-lit underpants, six-metre digital prints and creepy hanging bodies at this colourful and thought-provoking exhibition.

Beloved Chippendale art gallery White Rabbit is turning ten. To celebrate, curator David Williams has programmed a retrospective of works from the gallery's first ten years — including highlights from the very first exhibition held back in 2009. Then looks back, but also forward, bringing us a new instalment of White Rabbit's signature colourful madness, sombre reflections of a rapidly evolving culture and everything in between. Artist, curator and activist Bingyi Huang, known simply as Bingyi, is renowned for their ink paintings. Six accounts of a floating life, however, is a painting in oil. It aims to provoke discussions around contemporary Chinese ink painting, which continues a tradition dating back to 206 BC. Some say that ink is no longer necessary. The work also references the memoirs of 18th-century writer Shen Fu. While two chapters are missing (or perhaps were never completed) from his memoir Six Records of a Floating Life (浮生六記), the four that remain — 'Wedded Bliss', 'The Little Pleasures of Life', 'Sorrow' and 'The Joys of Travel' — are represented in Bingyi's painting. In the six-panel work, we see the poetics of painting unfold through brushstrokes and figures, which conjure a narrative that is as familiar and unfamiliar as the passage of time itself. An enormous pair of pink, fibreglass underwear gives a very loud shout-out to the commodification of love, sex and relationships in Wang Zhiyuan's 2008 piece, Object of Desire. Working together splashes of neon and gaudy tones, it's a playful, yet deliberate fusion of low and high culture, inspired by the materialistic attitudes of modern Chinese society. Riffing on the tale of Beauty and the Beast, it shows a woman trading favours for diamonds with an anthropomorphic old boar. A sky filled with clouds nods to an ancient Chinese euphemism for sex and a soundtrack of songs by 1930s and 1940s singer Zhou Xuan proves a fitting audio backdrop, spinning titles like 'The Hatred of the Brothel' and 'Don't Rely on Youth'. It's just one of many underwear-themed sculptures from Wang, who along the way has scored himself the nickname of 'the underpants artist'. 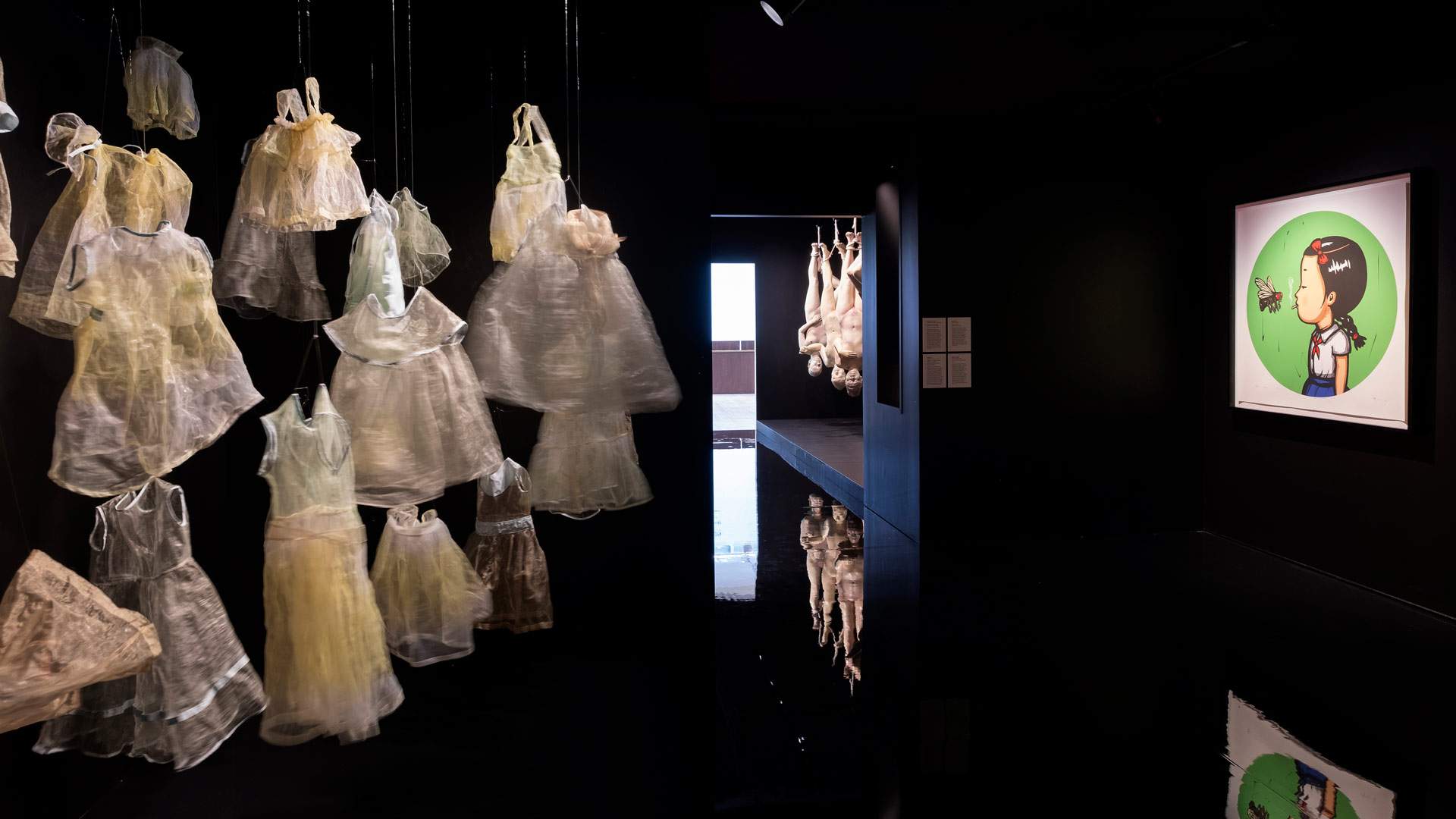 Twenty tiny starched organza children's dresses. Despite the title, artist Jin Nv doesn't connect her work with China's one-child policy and a society that valued sons more than daughters. The artist instead says the work is about memories from her own childhood and the idea that we emerge as adults as if from a cocoon. Jin had the dresses especially made, drawing inspiration from memories as well as from dresses her mother saved. Each dress in the installation is coated in a hardening material to evoke the cast-off shells of cicadas. The meaning we make of this artwork is up to us — whether that's love, loss, transience or political commentary. This 2005 work by artist Zhang Dali paints a powerful picture, featuring 30 life-sized naked figures hung upside down from the ceiling. Each of Zhang's suspended figures is cast from the body of a real-life migrant worker, their eyes closed and their body marked with the simple label 'Chinese offspring'. Capturing Zhang's more recent artistic focus on people rather than physical environments, it offers a confronting snapshot of China's rural migrant worker underclass, symbolic of the country's transition from an agricultural to a largely urban nation. Separated from city dwellers and without any of the rights that come with a hukou permit (a household registration system that has been used to restrict the movement of people between rural and urban areas), these workers are on their own, living between the city's edges and the countryside.

If you liked Huang Hua-Chen's 黃華真 The Family Album—So See You Later from the last exhibition at White Rabbit, take a closer look at Wu Junyong's series of paintings in oil in Next. This series of four paintings shows a recurring character in a dunce's hat, or gao maozi, which references the Chinese expression 'to flatter insincerely'. The seemingly simple artworks exhibit a masterful handling of paint — look closer and you'll see faint red breath mingling in the deep blackness behind the first character, and a series of painted-over lines in the last. Are these accidents, or planned parts of the work? The careful drawings suggest nothing is a coincidence, but Wu is careful to avoid explaining his pictures. The artist has said: "As far as I'm concerned every picture is a riddle. It might suggest a story we think we're familiar with, but then I put a whole lot of other random things in there with that to confuse." What meanings we find, says as much about our own inner worlds and the societies we inhabit as it does about worlds of his ambiguous characters.

At first glance, Men • Nursery • Women is a simple representation, even a reproduction, of the everyday symbols for male, female and baby. These familiar pictograms have beneath them what might seem like characters written in Chinese (to non-Chinese speakers), presumably spelling out the words represented by the pictures. However, these black and white screenprints are part of Xu Bing's intricate exploration of language, and how it structures our brains. His black and white silk screenprints create new characters that form the words 'men', 'nursery' and 'women', but in English, not in Chinese. Here three languages are fused: English, Mandarin and an increasingly globalised language of signs and symbols. By combining these, Xu "challenges us to think anew about what we take for granted, including how language structures the human brain". His other work includes dragonfly eyes and a feature-length narrative of video footage taken from Chinese surveillance cameras.

Dai Hua's I Love Beijing Tiananmen is a work to get up close to. Stretching across some six metres of wall space, the digital print features tiny pixelated figures, animals and cultural references that blur the lines between narrative and symbolism. A question mark appears above the head of a man who watches a monkey playing chequers with a bearded figure. People paint graffiti on the ground next to an oblong with rainbow colours of the spinning wheel of death (the one we're all familiar with from when our computers crash). An emperor with no clothes finds his way among contemporary military displays. This work references the song 'I Love Beijing Tiananmen' from the time of China's Cultural Revolution, sung by schoolchildren every morning after 'The Internationale' and 'The East is Red'.

Then is open until Sunday, January 26, 2020 at White Rabbit Gallery, 30 Balfour Street, Chippendale.