Six Must-See Works at the 'Lindy Lee: Moon in a Dew Drop' Exhibition According to the Artist

Sydney's Museum of Contemporary Art now has more than 70 of the celebrated Chinese Australian artist's works on display — here are the ones not to miss.

"I never expected that my work would amount to anything," says celebrated Australian Chinese artist Lindy Lee in conversation with Concrete Playground. "One dreams, but I never dreamed that I would ever have a proper career in art," she says. It's a humbling statement from the artist whose retrospective Lindy Lee: Moon in a Dew Drop opened at MCA Australia earlier this month.

Celebrating her dynamic and often experimental 40-year practice, with more than 70 works including paintings, flung metal pieces and immersive installations, the exhibition is one of the most exciting events in Australia this summer.

If you're not familiar with Lee's art, she says her work is never about giving off a message or trying to explain something. "But rather [to create] an experience for the viewer where they find themselves whittling out questions and curiosities," says Lee. "Art exceeds what anyone can say about it. When viewing it, it is almost self-reflective."

The multidisciplinary artist has a playful approach to her art in which process is as important as the finished piece. There are Lee's early photocopy works from the 80s, wax paintings and whole-room installations. And there's the dazzling steel sculpture 'Secret World of a Starlight Ember', made up of thousands of tiny perforations and located in the Museum's forecourt, which you'll want to catch at night — and undoubtedly take a selfie. But there are also six artworks that are particularly close to Lee's heart, which, according to the artist are not to be missed. For Lee, they represent different points of her practice, direction and philosophies — and they're pretty great to look at, too. 'NO UP, NO DOWN, I AM THE TEN THOUSAND THINGS'

Lee's practice is deeply rooted in Daoism and Ch'an (Zen) Buddhism philosophies, with her works often examining the connection between humanity and the cosmos. But it wasn't always so, which is why her work 'No Up, No Down, I Am the Ten Thousand Things' is such a seminal piece. "[It] was the first work that I ever created with a direct intentional relationship with Zen philosophy," says Lee. 'No Up, No Down, I Am the Ten Thousand Things' takes over an entire corner of the Museum, with approximately 1200 colourful photocopies, marked with flung ink (an ancient Chinese art form), scattered across the walls and floor. The bold work first exhibited at the Art Gallery of NSW in 1995 and has been recreated by Lee thanks to the MCA's Director and exhibition curator Elizabeth Ann Macgregor — her first curated exhibition since the MCA's 2012 Anish Kapoor show. 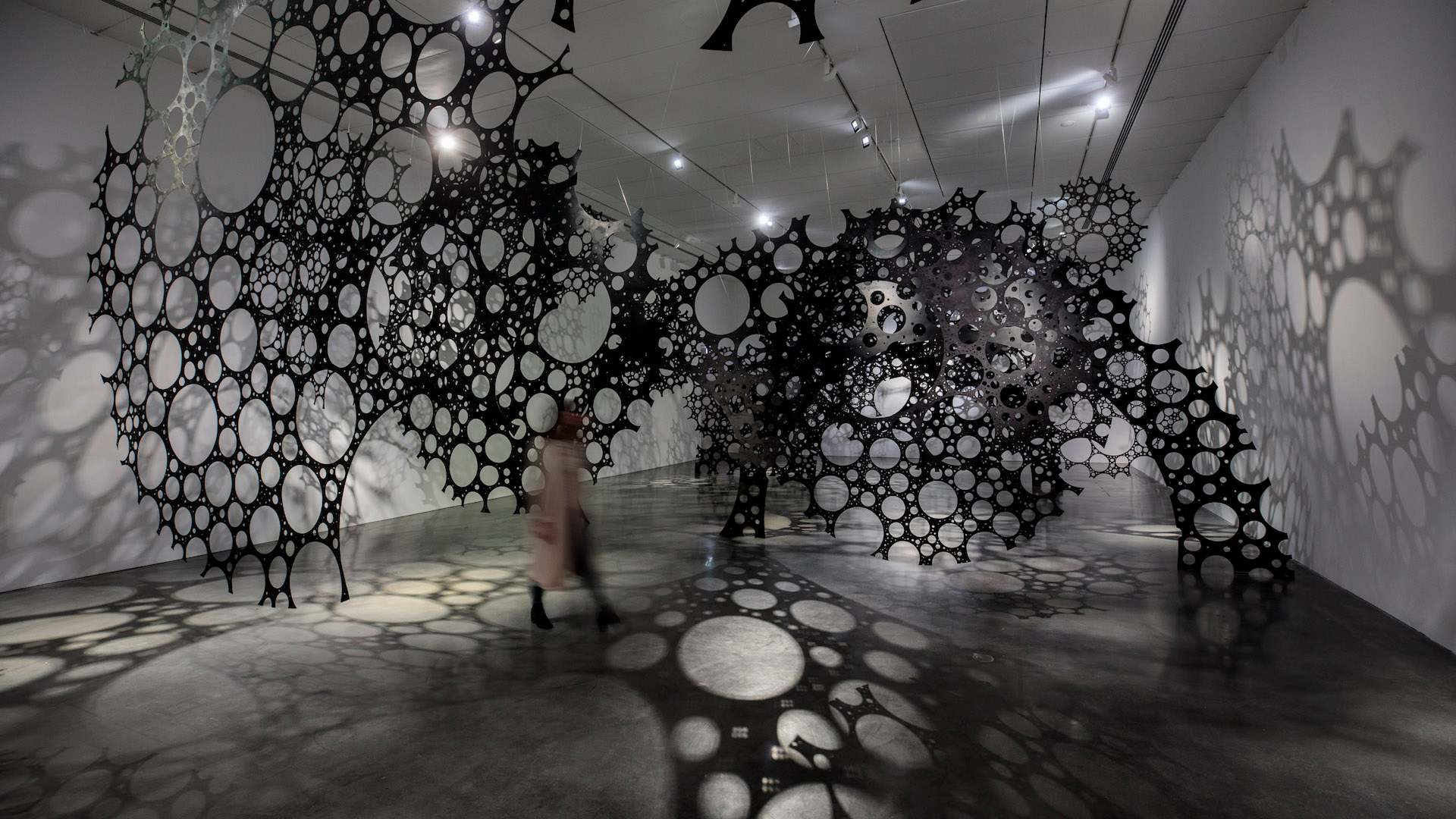 This massive, immersive piece of art was commissioned especially for the exhibition and is made up of 31 perforated paper discs, varying from two to ten metres in diameter. So expect the wow-factor when walking through this one. Predominantly black and white with "the silvery light you get on a full moon night", 'Moonlight Deities' has a sense of otherworldliness to it. On the surface, it's all about dark and light, silhouettes and shadow, with moon crater-like projections dancing across the room. There's little difference between the discs and the shadows they cast, which, as you walk through the room, create a sense of liminality — all connecting back to Ch'an buddhism. "I have a fascination with time. In Zen philosophy, the thing I find immeasurably fascinating is the notion that time is actually an ingredient of what we are," says Lee. "We're all impermanent. And in the universe everything changes." 'Birth and Death' is Lee's most personal work in the exhibition. "It remains one of the most important works I've ever done," says the artist. Created as an homage to her late nephew Ben after he passed away aged 22 from cancer, 'Birth and Death' touches on political and cultural themes such as migration, Chinese culture and the White Australia policy. "But the essential purpose of this piece was to honour Ben and give him his place in five generations of family," she says. "It's about paying honour to someone I cared very much about." The work is made up of 100 accordion books, with books dedicated to members of Lee's family at various stages of their life. Using red, the work evokes an association with blood as much as it does with China. It is as visually impactful as it is evocative. 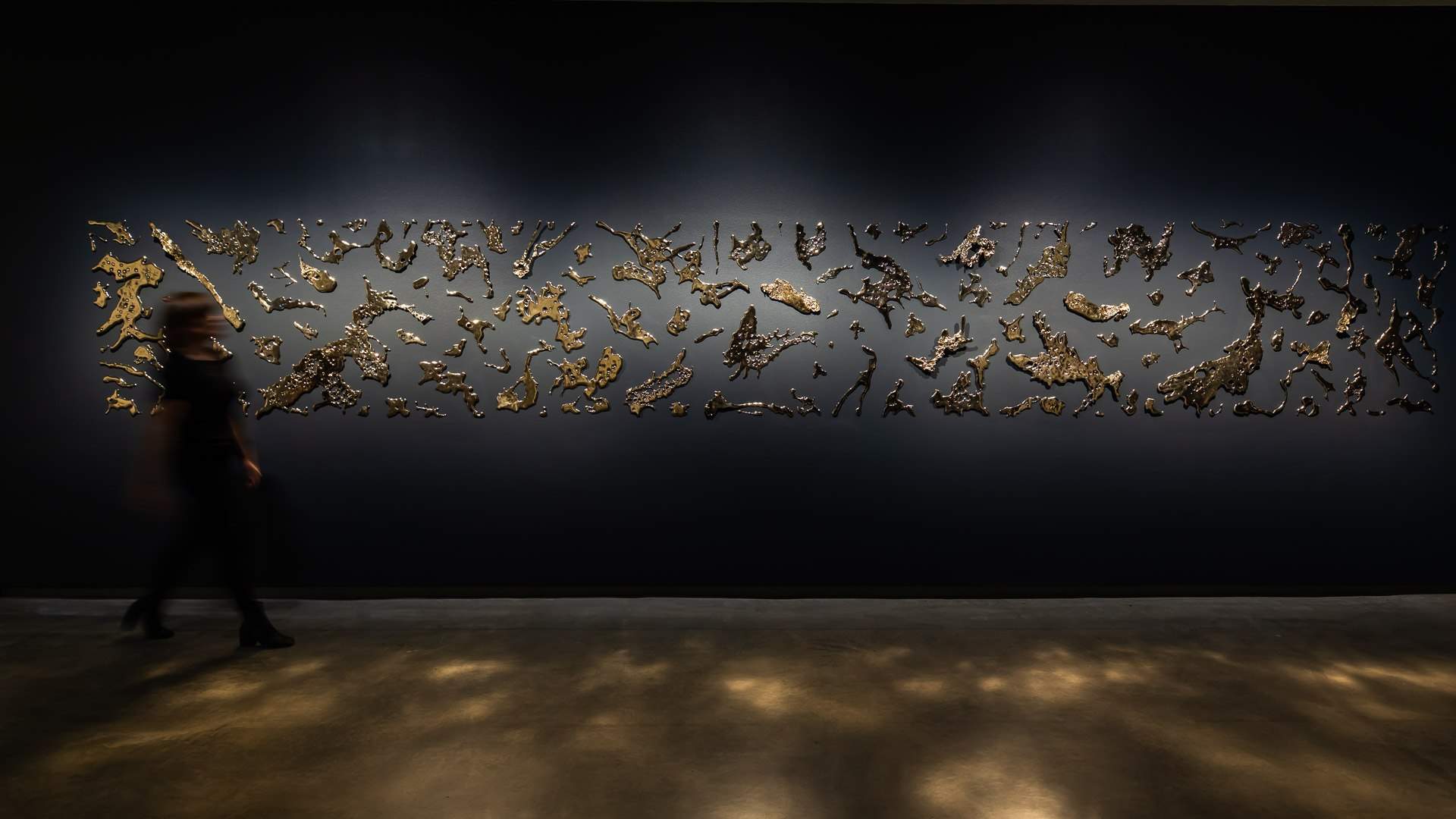 Lindy Lee is no stranger to experimentation in art. In fact, it is a major part of her process and with 'Strange Condensations' she surrenders to it. Her flung bronze works came about from seeing accidental bronze drippings on a foundry floor and, naturally, she wanted to turn it into art. By taking molten bronze and flinging it at surfaces, the artist creates almost cosmic constellations — in a hazmat suit, no less. Again stemming from her Buddhist beliefs, 'Strange Condensations' — and its making — is symbolic of the universe as an infinite net, constructed and dependent on everything within it. "What I love about [flung bronze] is that it's uncontrollable. Everything that exists in that moment makes that mark," says Lee. "Each shape is unique and it is absolutely about the conditions of the time that creates them. And thus it is with life." 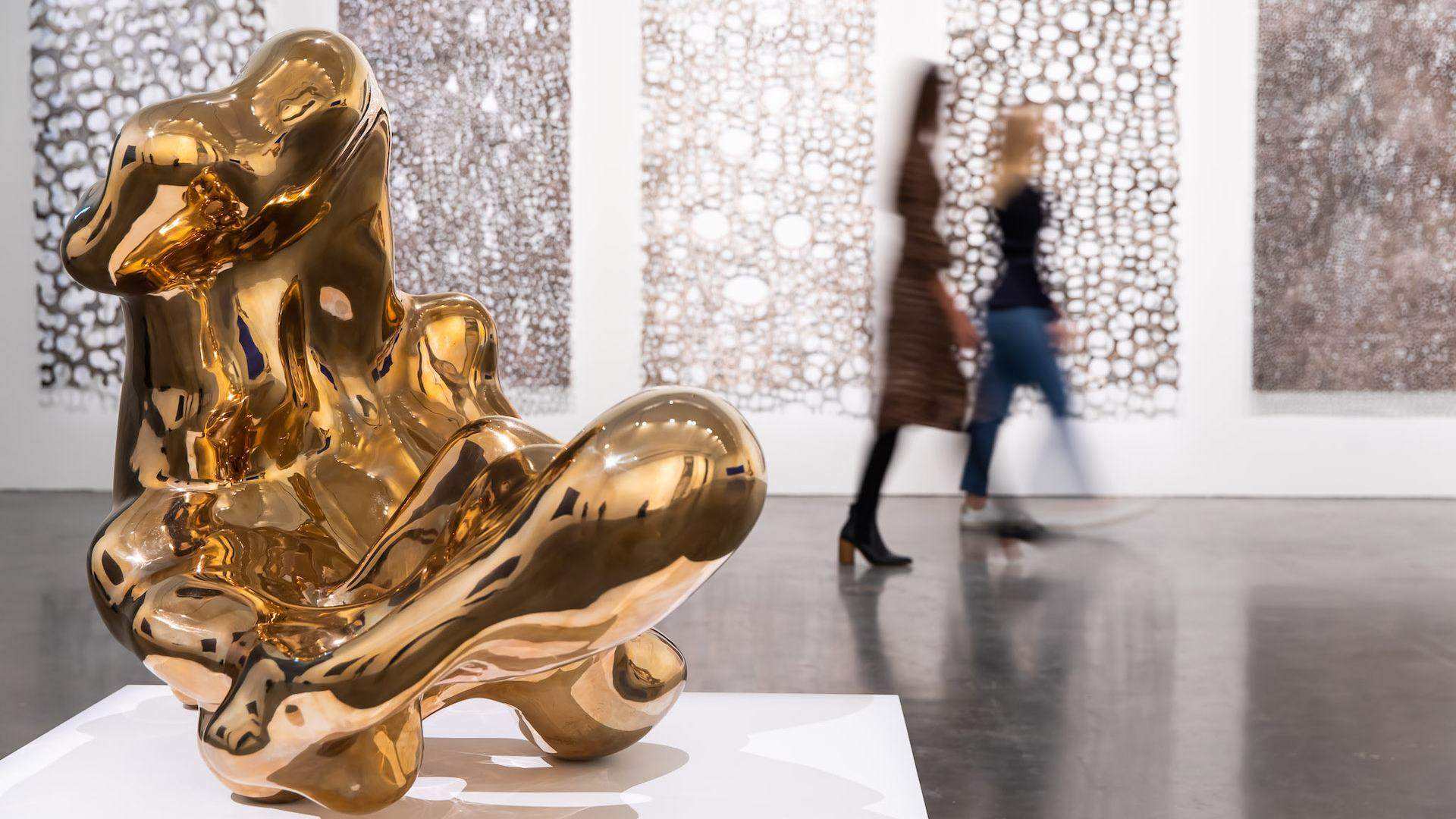 'OPEN AS THE SKY' AND 'UNNAMEABLE'

If you thought splashing 1200-degree metal around was experimental, think again. Wanting to make her flung bronze works three-dimensional, Lee turned to a litre of Pauls custard — as a cooling substance to drop molten metal into. With the metal rolling into itself while cooling, it creates spontaneous forms that Lee then scales up. The end result is a series of gnarled, pitted sculptures like 'Open As the Sky' and 'Unnameable'. As well as being the product of a cool science experiment, these works are the artist's own version of gonshi (ancient scholar's rocks) and, in turn, celebrate her Chinese heritage. "It takes an immense energy of geological transitions and force over thousands of years to make [gonshi]. That's why they're admired; they literally contain the movement of the universe through them. So, you know, I wanted to make my own."

'Lindy Lee: Moon in a Dew Drop is showing at MCA Australia until February 2021. The gallery is currently open 10am–5pm, Tuesday–Sunday, with COVID-19 measures in place. Entry is free and unticketed.